Plus: Mexico avoids further U.S. negotiations—for now, more protests in Puerto Rico, and what to watch in the world this week.

Another Night of Violence in Hong Kong

Hong Kong’s opposition party has launched an investigation into attacks by suspected Triad gang members against passengers on a city train, including anti-government protesters. Video footage published by local media shows the white-clad, masked attackers beating people—including women and children—with umbrellas and wooden sticks. Many passengers criticized the police for standing by and failing to intervene.

The subway attacks came amid an already violent day of protests in the city. Hundreds of thousands of people took to the streets, surrounding the Chinese government’s Liaison Office in Hong Kong. Late on Sunday, some of the protesters clashed with police, who fired tear gas and rubber bullets into the crowd.

Who were the attackers? Pro-democracy lawmakers have accused Triad members—Chinese criminal gangsters—of carrying out the attacks, which occurred in a train station near Hong Kong’s border with mainland China. Attacks against demonstrators during the pro-democracy protests in 2014 in the city were also blamed on the gang members.

China responds. The march on Beijing’s representative office in Hong Kong marked a direct challenge to Chinese authorities, after days of protests aimed at mainland Chinese visitors to the city. Protesters threw eggs and painted graffiti on the walls. Early Monday, Chinese state media condemned the actions as “unacceptable.”

The Chinese Communist Party has continued to back Hong Kong Chief Executive Carrie Lam, as protesters continue to demand that she resign over her handling of the controversial extradition bill that sparked the protests and the subsequent police violence.

Mexico avoids “safe third country” agreement, for now. Mexico appears to have avoided further negotiations to keep U.S. tariffs at bay by today’s deadline. After a meeting between U.S. Secretary of State Mike Pompeo and Mexican Foreign Minister Marcelo Ebrard on Sunday, it seems that the United States is satisfied with Mexico’s efforts to reduce migration flows. That means that for now Mexico will avoid talks over becoming a so-called safe third country, which would force asylum seekers to settle in Mexico. But Pompeo was not definitive: “We’ve got a long way to go yet,” he said.

Mass demonstrations expected in Puerto Rico. More protests and a general strike are planned in Puerto Rico today. The publication of offensive chat messages between Governor Ricardo Rosselló and officials has catalyzed public resentment over alleged corruption within his administration. On Sunday, Rosselló agreed to resign as the head of his party but insisted he would remain governor through the end of his term—January 2021. An independent report on whether the messages could warrant impeachment is expected within 10 days.

Britain grapples with response in Iran crisis. The British government is expected to announce its plans to respond to Iran’s seizure of a British military ship, the Stena Impero, in the Strait of Hormuz on Friday—which appears to be retaliation for the British capture of an Iranian tanker two weeks ago. (Iran maintains the seizure was for “security purposes.”) Experts say Britain has few good options—Iran already faces harsh U.S. sanctions—and that Iran’s move could be intended as a test.

Pakistani Prime Minister Imran Khan visits the White House for the first time today, where he hopes to restore trust and push for a restoration of U.S. military aid to Pakistan. U.S. President Donald Trump’s agenda will likely focus on counterterrorism and urging Pakistan to put more pressure on the Afghan Taliban. If the situation in Afghanistan deteriorates, Khan shouldn’t let him make Pakistan a scapegoat, former Pakistani ambassador Sherry Rehman argues in FP.

A court case against two Sri Lankan officials begins today, with the country’s police chief and former defense secretary charged with “crimes against humanity” for failing to prevent the bombing attacks that killed more than 250 people on Easter Sunday, despite warnings from Indian intelligence.

On Tuesday, Britain’s Conservative Party will announce the country’s next prime minister, with the former foreign secretary, Boris Johnson, expected to win. Johnson has campaigned on the promise to take Britain out of the European Union by Oct. 31, no matter what. As the announcement approaches, several senior ministers—including the chancellor of the exchequer, Philip Hammond—have indicated that they will resign if Johnson is elected, due to his refusal to rule out a no-deal Brexit.

U.S. Special Counsel Robert Mueller testifies before the House Judiciary and Intelligence Committees on Wednesday, after being subpoenaed. Despite House Democrats’ plans, Mueller has indicated that he won’t provide any details on the investigation into Russian meddling in the 2016 election campaign that wasn’t previously released in his report.

Wildfires in Portugal. Three fires are still burning in the Castelo Branco municipality in central Portugal, where villages have been evacuated. Police have opened an investigation into the fires, which began around the same time on Saturday and in the same area. In 2017, a wildfire in Portugal killed 64 people and injured more than 250. “We never thought we would live through this again,” the mayor of Macao told a local radio station.

Tech to counter anti-vax disinformation. Technology used to counter violent extremism could soon be used to fight the spread of anti-vaccine conspiracy theories online. A British company working in 28 countries that identifies people at risk of online radicalization has turned its techniques on the anti-vax movement, the Guardian reports.  The World Health Organization named “vaccine hesitancy” as one of the biggest threats to global health this year.

Rescue ships in the Mediterranean. Seven months after ceasing operations, the migrant rescue group SOS Méditerranée and Doctors Without Borders have resumed search-and-rescue efforts off the coast of Libya with a new ship, the Ocean Viking. Migrants fleeing via Libya are often intercepted by the EU-supported Libyan coast guard and detained in government centers, where they are subject to dangerous conditions. More than 50 migrants were killed in an airstrike on the Tajoura detention center on July 3.

President Volodymyr Zelensky’s party appeared to be on track for a definitive win in Ukraine’s parliamentary election, though likely short of a majority. The win will give the ex-comedian a mandate to carry out his promised reforms. Zelensky has proposed coalition talks with Voice, a pro-Western party led by a rock star.

Almost three months after parliamentary elections and rounds of fruitless negotiations between parties, Spain is set to form its first coalition government since the country’s return to democracy in 1977, as debate in parliament begins today. Socialist Prime Minister Pedro Sánchez faces a confirmation vote on Tuesday, and doesn’t yet appear to have enough votes to win an absolute majority.

Italy’s squabbling coalition partners are preparing for a battle this week that could trigger elections in the fall. Matteo Salvini, the head of the right-wing League party, said he will leave if the Five Star Movement doesn’t make concessions, including more autonomy for the country’s north. Prime Minister Giuseppe Conte will make a proposal on the issue on Friday.

Prime Minister Shinzo Abe’s ruling coalition won a majority in Japan’s upper house election on Sunday but fell short of the supermajority needed to push through constitutional reforms to bolster the country’s military. Abe will become Japan’s longest-serving prime minister if he remains in office through November.

Last Friday, U.S. President Donald Trump tweeted that he would intervene in the case of the rapper A$AP Rocky, who is detained in Sweden after allegedly assaulting someone in a pre-concert fight. While Trump offered to pay Rocky’s bail in a phone call with the country’s prime minister over the weekend, that likely won’t help his case: Bail doesn’t exist in Sweden.

A French inventor will attempt to cross the English Channel on his jet-powered hoverboard this week. Franky Zapata showed off the flyboard at France’s Bastille Day parade earlier this month. If successful, he expects the journey to take around 20 minutes. 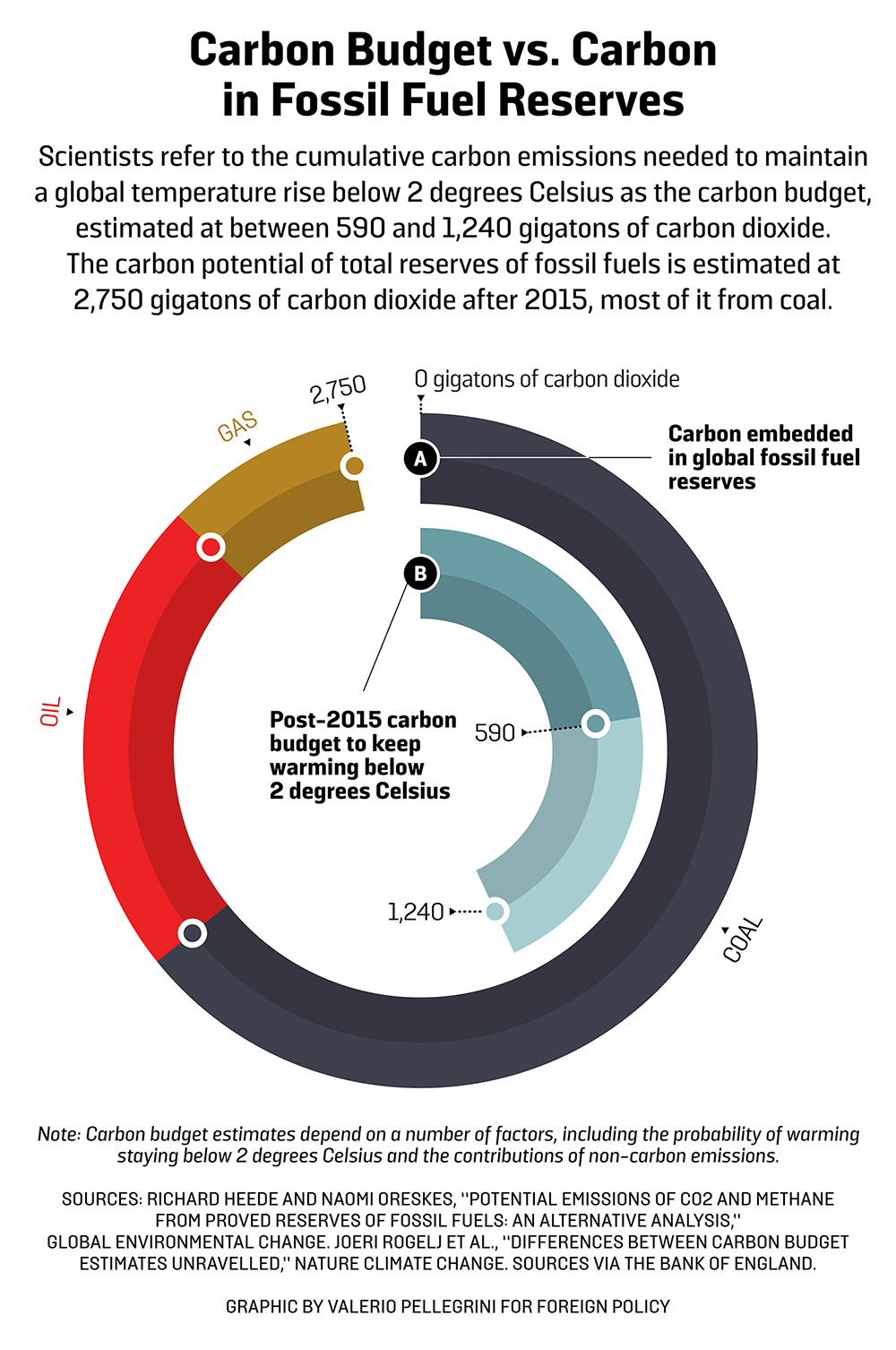 Central banks are beginning to worry about the potential for climate change to trigger a financial crisis, Adam Tooze writes in Foreign Policy. As shown above, stabilizing global temperatures will require leaving fossil fuel reserves underground: “Leaving that energy untapped will mean as much as $28 trillion in lost revenue for oil, gas, and coal companies over the next 20 years,” Tooze notes. “And that matters for the financial system because investors already own bonds and shares connected to those assets.”

“This kind of scenario—protracted denial followed by panic-driven decarbonization—is what concerns the central bankers most of all,” he writes.

To discover the other unlikely saviors of the global climate crisis, read the rest of Foreign Policy’s climate issue here.