A conversation with Ani Chkhikvadze, a Georgian journalist based in Washington.

Welcome to The View From There, Foreign Policy’s new column in which foreign correspondents in Washington, D.C., talk about what’s making news in their home countries. Foreign Policy recently spoke with Ani Chkhikvadze, a Georgian journalist based in Washington, who is a contributor to Voice of America (VOA). Views expressed in this article do not represent the opinions of VOA, the U.S. Agency for Global Media, or the U.S. government.

She told us about what prompted the country’s recent political crisis, why you can’t trust Moscow, and why Georgia may be the canary in the coal mine for Russian intentions. What follows has been edited lightly for clarity and brevity.

Welcome to The View From There, Foreign Policy’s new column in which foreign correspondents in Washington, D.C., talk about what’s making news in their home countries. Foreign Policy recently spoke with Ani Chkhikvadze, a Georgian journalist based in Washington, who is a contributor to Voice of America (VOA). Views expressed in this article do not represent the opinions of VOA, the U.S. Agency for Global Media, or the U.S. government.

She told us about what prompted the country’s recent political crisis, why you can’t trust Moscow, and why Georgia may be the canary in the coal mine for Russian intentions. What follows has been edited lightly for clarity and brevity.

Ani Chkhikvadze: It’s not surprising, but Russia is a big story in Georgia these days. This all started when a Russian parliamentarian from the Communist Party came to attend an Orthodox parliamentarians’ assembly in Tbilisi. He sat down in the chair of the speaker of the Georgian Parliament, and this prompted thousands to take the streets in anti-Russian protests. Russia occupies 20 percent of Georgia’s territory. However, this was not only about Russia—it was also about the government at home that has been quite soft in dealing with Russia over the last few years. 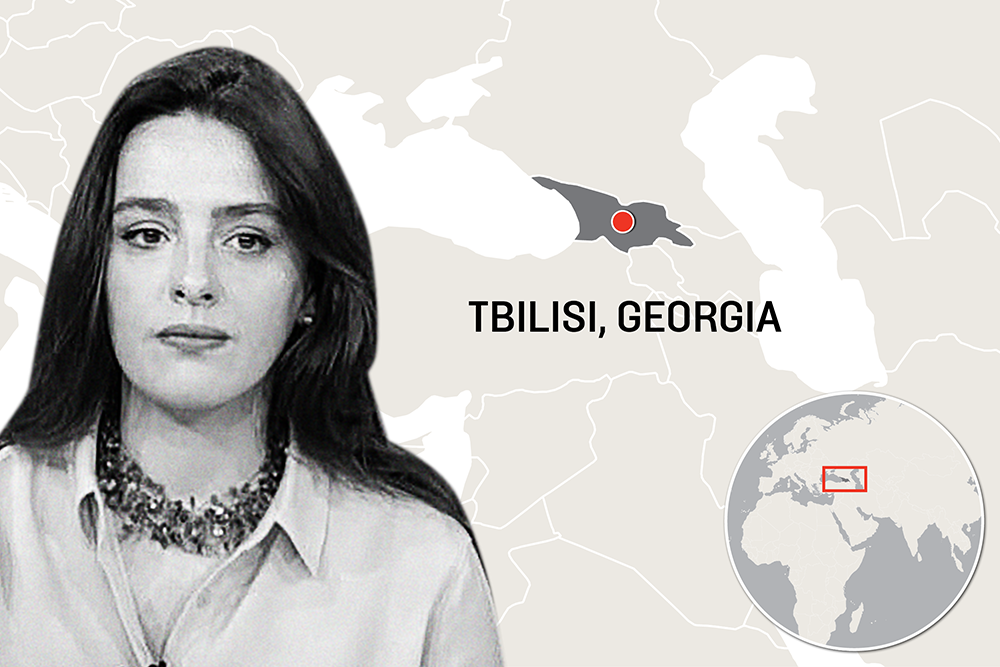 Ani Chkhikvadze, a Georgian journalist based in Washington.

The protests [which are still ongoing] are against the Russian occupation, but they have also been directed against the government itself because the government brutally responded to the initial demonstration [firing tear gas and rubber bullets]. It left 240 people injured, and two people lost their eyes. The protesters are demanding the resignation of the interior minister.

It also showed how Russia responds in such situations. Moscow banned direct flights to Tbilisi, called upon its tourists not to travel to Georgia—Russian tourists account for 10 percent of Georgia’s tourist industry, which is a core part of Georgia’s economy.

We saw that members of the Russian parliament came out against Georgia. Suddenly, they all started hating Georgian wine and hating Georgian food. It showed that you cannot be dependent on Moscow as Georgia’s neighbor because, if you are, it will definitely be used as a political tool against you when necessary.

FP: How do you characterize the approach of the ruling Georgian Dream party toward Russia? On the one hand, they’ve continued the Euro-Atlantic direction of the previous government, but then on the other hand they’ve been accused of being softer on Russia.

AC: No political force in Georgia can be pro-Russian and win elections, and these demonstrations show that the majority of the population is in favor of a pro-European path because they want more freedoms and more opportunities, which Russia doesn’t represent for them.

We cannot say that they are openly pro-Russian. However, it’s hard to frame because, on paper, they are pro-European, but at the same time, they’ve been trying to have this balance [toward Russia], which Georgia’s history has shown doesn’t work. If you ask the Georgian people, the majority obviously don’t want a confrontation. They want stability. But at the same time, the government’s approach of never reacting to when there are killings or kidnappings in the occupied territories, of not talking about it to Western counterparts, not raising it—they were trying not to create any fuss around these issues because they didn’t want to annoy Moscow.

The outcome of all this, and the lesson to learn from this, is that the Russians have not given anything to them. They continue to occupy territories. They continue building fences at the occupation line in Georgia. They have not conceded anything in return. If anything, Russia has been even pushing harder. So what’s the point of having a policy that is balanced if you don’t get anything in return?

You cannot have a multivector foreign policy in Georgia because your only security guarantee is in the West and only there. That’s why it would never work to play this game with Russia, and we have seen, over the history, it has not worked.

FP: It was a violent crackdown on protests in 2007 that began to turn the tide on the United National Movement [the previous ruling party in Georgia founded by former President Mikheil Saakashvili]. Do you think that similar things are now going to happen to Georgian Dream? Are they in trouble in the elections next year?

AC: They are repeating the same mistakes of their predecessors. Towards the end, Saakashvili’s government was only focused on how to stay in power. They had already stopped the reforms that my generation, which is the reform generation, has benefited from most. We remember life during the ’90s.

We were kids, kids are happy everywhere, but we still remember bringing oil to school to heat up or having no electricity. Our parents’ generation felt more than we did because, as I said, we were younger. But we benefited from all the changes since. We did not have to pay bribes to get into university. We did not have to be part of the corrupt society that our previous generation was.

With the previous government having done all that, we now demand more from the government. With the demand from the population rising, Georgian Dream is now stuck in the past and not offering anything to young people, and that’s why we see young people taking to the streets.

We want more freedom. We want the right to be protected. We want a state that is functional and works for our benefit and protects our freedoms.

FP: Are you worried that the Euro-Atlantic appetite is going to dim in Georgia the longer that you don’t get NATO accession or European Union membership? That that enthusiasm is going to fade? Or do you think you can keep moving closer toward the spirit and values of what they represent, even if it doesn’t lead to membership of the institutions themselves?

AC: I think the population at this point realizes that it’s a long shot. NATO is the No. 1 choice for us now, but we also recognize the difficulty of getting in NATO. Even if NATO or the European Union and the West in general did not have the problems they have now, we would still probably face opposition to this [Georgia’s membership]. But I mean, never say never, who knows.

The European Union has been dealing with Brexit now. Looking at this from a Georgian perspective, as someone who is outside [the EU], it suggests that if we can have a Europe without all the leading European countries—if there is no U.K. in Europe—it means that Europe is something more than just the European Union.

FP: To be part of the broader European community, if not the union itself?

AC: Yes. The European Union, or Western integration, for Georgia is an affirmation of Georgia’s centuries-long struggle that it has been going toward. An affirmation that you are a European nation. That has a symbolic value in that sense.

FP: Four years after Russia invaded Georgia, the United States pursued a reset with Russia. And then Ukraine happened, and that then became a red line. And then the 2016 U.S. presidential elections happened, and now everyone is talking about Russian interference. Having watched what Russia has been up to in Georgia for over a decade, is it frustrating for you? Do you wonder why Georgia wasn’t a red line? Does it frustrate you that everyone is talking about Russian interference only now that it’s happened in the United States?

AC: The policy of Obama administration then to restart with Russia was, from our point of view, a strategic mistake in the sense that it allowed President Vladimir Putin to then feel like he could go and invade Ukraine without paying any price.

And, yes, he paid some price in Ukraine, but I would say that still Western coherence against Russian aggression has not been strong enough. The United States has been, in a way, absent because this was the policy of the administration then, to be less involved in other parts of the world.

Today, we’ve seen some positive development, such as the Javelins [antitank missiles given to Ukraine] and continued support in many ways with the military, but we still don’t see the kind of understanding of Russia as something that will be there, and continue acting the way it acts, regardless of whatever pact you sign with it.

Obviously for me, it’s about Georgia’s freedom, my own personal security, my family’s security.

But I have this conversation all the time in Washington. For me, to sell it to Americans, it’s like, “If you don’t defend against it, it can come to you. One day it will be your problem.” I think we’ve seen that with, for example, the migration crisis also. When you don’t get involved to solve something and try to keep it under the table, pretend as if it’s not happening and not get involved—one day it will become your problem.

Some have argued that this could cause a confrontation with Russia. I don’t think that is true. I think we’ve seen, historically, that every time there was Western resolve on any issue, NATO enlargement in the Baltics for example, Russia has never tested that resolve.

FP: Some people describe Georgia as the front line of democracy. Is that something that you subscribe to?

AC: Yeah, I would say so. I think we are a canary in a coal mine. If we succeed or fail, it will send a strong message to at least the other countries in the post-Soviet space.

The party tried to improve ties with Russia. Then the public intervened.