Plus: Sanctions slapped on Iran’s Zarif, more unrest in Sudan, and the other stories we’re following today.

North Korea’s state media have reported that North Korean leader Kim Jong Un oversaw a the first test of a “new-type, large-caliber” missile on Wednesday. The news follows South Korean reports that North Korea had fired two missiles into the sea. U.S. and South Korean officials are still pushing the country to abandon its nuclear and ballistic missile program.

The U.N. Security Council has also banned North Korea from launching ballistic missiles, and Britain, Germany, and France have called a closed-door meeting of the council today. U.N. Secretary-General António Guterres pointed to the tests as “another reminder” of the necessity of restarting nuclear talks.

Where do the talks stand? Both U.S. President Donald Trump and his administration have downplayed the launch and another short-range missile test last week, as they continue to push for a diplomatic solution. Despite the historic handshake between Trump and Kim in June, the prospect of renewed nuclear negotiations remains fragile.

Kim, meanwhile, is pushing for relief from U.S. sanctions and, more immediately, to get the United States and South Korea to call off joint military exercises set for later this month. But with the missile launches, it’s not clear how long he can test Trump’s patience, as Uri Friedman notes in The Atlantic.

U.S. slaps sanctions on Zarif. The United States imposed sanctions on Iranian Foreign Minister Mohammad Javad Zarif on Wednesday as tensions between Washington and Tehran continue to rise. The sanctions block any property or investments in the United States, which Zarif says will have “no effect,” as he doesn’t have any. Zarif is seen as Iran’s spokesman on the international stage, and the move could diminish chances of diplomatic talks between the United States and Iran. (On Wednesday, Zarif called U.S. Secretary of State Mike Pompeo’s offers to visit Tehran “empty and disingenuous.”)

African Union calls for justice in Sudan. The mediator for the African Union in Sudan has called for a case to be brought against the security forces that killed at least four schoolchildren during a student protest in the city of El-Obeid this week. But the only authority that could begin an investigation is the ruling military council, which is in negotiations with opposition and protest groups—set to resume in the coming days. Sudanese activists have called nationwide protests today in response to the violence.

Boris Johnson could see majority dwindle. A Parliamentary seat in rural Wales is up for a vote today, and the pro-European Union Liberal Democrats are favored to win. That would mean Prime Minister Boris Johnson would see his working majority in Parliament decline to one. Polling in Brecon shows the Brexit and Conservative parties could split the pro-Brexit vote.

Syrian refugees in Lebanon. Lebanon has the most refugees per capita in the world. While its official policy has been to host Syrian refugees until the war in the neighboring country ends, it has recently starting coercing them to leave. The turn in policy is driven by an economic downturn, high unemployment—and a culture of sectarian nationalism, Anchal Vohra writes for FP.

Zelensky’s political “boot camp.” Ukrainian President Volodomyr Zelensky held a training camp on legislation and public policy this week for his party’s 254 lawmakers—all new to the country’s parliament, and to politics. (Zelensky didn’t let any former lawmakers join his party, called Servant of the People.) The new parliament will likely convene in September.

Economic reforms in Ethiopia. The Ethiopian parliament passed a law on Wednesday to open up the country’s financial sector to its diaspora—which is estimated at 5 million. The hope is that Ethiopians living abroad will buy shares in local banks and boost the country’s foreign exchange reserves. The bill is part of Prime Minister Abiy Ahmed’s broad package of economic reforms.

How the U.S. military handles sexual violence. A woman who alleges she was sexually assaulted by John Hyten, the presidential nominee for vice chairman of the U.S. Joint Chiefs of Staff, faced “public shaming” at Hyten’s confirmation hearing this week, advocates say. It’s a major setback for efforts to reform the way that the military handles sexual assault, Lara Seligman reports.

Three million hectares of forest in Siberia are burning, and Russian President Vladimir Putin has called on the military to help put out the blaze. Environmentalists say the size of the fire could speed up global warming. Russia has declared a state of emergency in five regions.

What Brexit’s Done to the British Pound 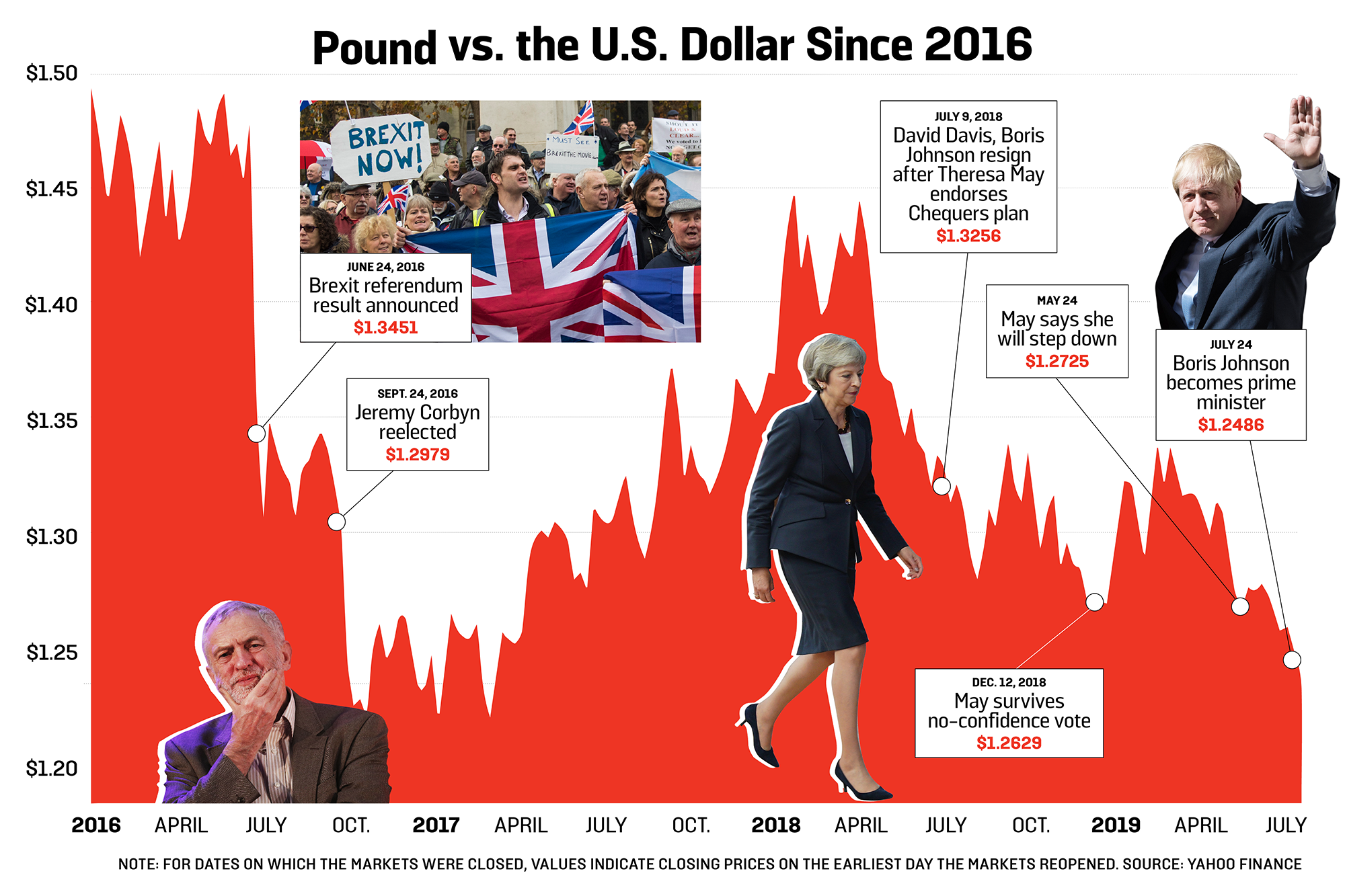 On Tuesday, the British pound hit a two-year low against the U.S. dollar, dropping to just $1.212. It’s just the latest blow to the currency since Boris Johnson became prime minister, indicating he might accept a no-deal Brexit. In fact, the pound has never really recovered since the Brexit referendum in 2016, as shown above.

This week, Brazil’s President Jair Bolsonaro skipped out on a meeting with the French foreign minister—reportedly, to get a haircut. The two leaders were expected to clash over climate policy. France has threatened not to sign an EU trade deal with the South American trade bloc if Bolsonaro won’t stick to the Paris climate accord.

Italy’s culture minister has blocked the construction of a new McDonald’s near the Baths of Caracalla in Rome. The city has more than 40 McDonald’s locations, but none in its ancient quarter. “The wonders of Rome must be protected,” Mayor Virginia Raggi tweeted.