Markets Brace for Another Tumble Amid Trade War Fears

Plus: Kashmir remains on lockdown, the U.S. maritime mission grows by one, and the other stories we’re following today.

Here is today’s Foreign Policy brief: Global markets brace for more volatility, what to expect next in Kashmir, and Britain joins the U.S.-led maritime mission in the Persian Gulf.

Another Volatile Day for Stock Markets

Here is today’s Foreign Policy brief: Global markets brace for more volatility, what to expect next in Kashmir, and Britain joins the U.S.-led maritime mission in the Persian Gulf.

Another Volatile Day for Stock Markets

The Dow Jones Industrial Average and the S&P 500 fell by around 3 percent on Monday—the largest drop this year. The markets were responding to another escalation in the U.S.-China trade war: For the first time in a decade, China allowed its currency to weaken below seven yuan to the dollar, prompting the U.S. government to label China a currency manipulator. Markets in Asia did not drop as precipitously as in the United States; both the Nikkei and Hang Seng were down by less than 1 percent at closing on Tuesday.

The downturn on Monday has raised fears that a bigger market correction could be on its way, as well as concerns that China might be willing to use its currency depreciation in the trade war. The yuan fell just days after the U.S. President Donald Trump announced plans to impose additional tariffs on Chinese goods on Sept. 1.

Why did China allow the yuan to depreciate? A weaker currency makes exports cheaper in foreign markets, potentially offsetting the U.S. tariffs. Still, it comes at a cost for Chinese consumers and any companies that have borrowed in dollars, Patrick Chovanec, professor at Columbia University’s School of International and Public Affairs, wrote in an email. “That short-term game comes at a longer-term cost, but Beijing appears ready to pay it,” he said.

How will investors react? The tumble came less than a week after the U.S Federal Reserve announced it would cut interest rates—and it could be under pressure to lower them again in the fall. The U.S. economy was already slowing: “The tariff announcement has just refocused everyone’s attention on a downside that was already there,” Chovanec said.

But the future looks volatile: “To the extent that investors can afford to ride out the ups and downs, they’re probably better off staying in the market and doing that,” he added. “But it could be a bumpy ride.”

What happens next in Kashmir? Indian-administered Kashmir remains on lockdown after India’s government announced Monday that it would revoke the special status given to the disputed region under Article 370 of the country’s constitution. While protesters gathered in both Delhi and Islamabad to rebuke the decision, unrest could bubble over in Kashmir itself. Revoking Article 370 is a major turning point that could backfire on India, Michael Kugelman argues in FP. “India is unilaterally altering the territorial status of a highly disputed territory that is, per square mile, the most militarized place in the world,” he writes.

Gulf tensions remain high. Weeks after calling for a European-led mission, Britain has announced that it will be the first to join the U.S. maritime security mission in the Persian Gulf, where Iranian forces seized a third oil tanker on Sunday. Meanwhile, lawmakers from both the Republican and Democratic parties are concerned about the rising risk of war in the region: Twenty-eight are pushing legislation that would require congressional authorization for the use of funds for military action against Iran, Robbie Gramer reports.

Trump condemns “racist hate,” but not guns. In an address on Monday, U.S. President Donald Trump blamed violent ideology in the wake of two mass shootings over the weekend. He did not endorse any gun control legislation, despite mentioning background checks earlier in the day. Trump will visit Dayton and El Paso on Wednesday. Meanwhile, Mexican President Andrés Manuel López Obrador doubled down on his criticism, calling on the United States to “control the indiscriminate sale of weapons.” Eight Mexican citizens were killed in the El Paso attack.

New South Wales set to decriminalize abortion. Today, lawmakers in New South Wales are debating a widely supported bill that would decriminalize abortion in the state—the only one in Australia where a woman who has an abortion can be charged with a crime. Abortion also remains criminalized in New Zealand, where Prime Minister Jacinda Ardern’s government has announced plans to pass a law removing it from the 1960 Crimes Act. (Currently, women must prove that a pregnancy is a risk to physical or mental health.)

Italy’s Matteo Salvini. On Monday, Italy’s upper house approved a law that will allow Italian authorities to seize migrant rescue ships in the Mediterranean. It’s a win for Interior Minister Matteo Salvini in particular. He has pushed for the law since the European elections, and his League party is polling far ahead of its senior partner, the Five Star Movement.

North Korean cyberattacks. A confidential U.N. report has revealed that North Korea is funding weapons programs in part through $2 billion from banks and cryptocurrency exchanges stolen through cyberattacks, according to Reuters. North Korea’s attacks have become “increasingly sophisticated,” the report says.

Sudan’s power-sharing deal. Sudan’s opposition signed a transition agreement with the ruling military council on Sunday after weeks of negotiations. Celebrations were muted: The military has outlasted the country’s democratic movement since the coup that ousted ex-President Omar al-Bashir. Its influence is preserved in the new constitution, Justin Lynch reports for FP.

Graphic: Who Hit the Switch? 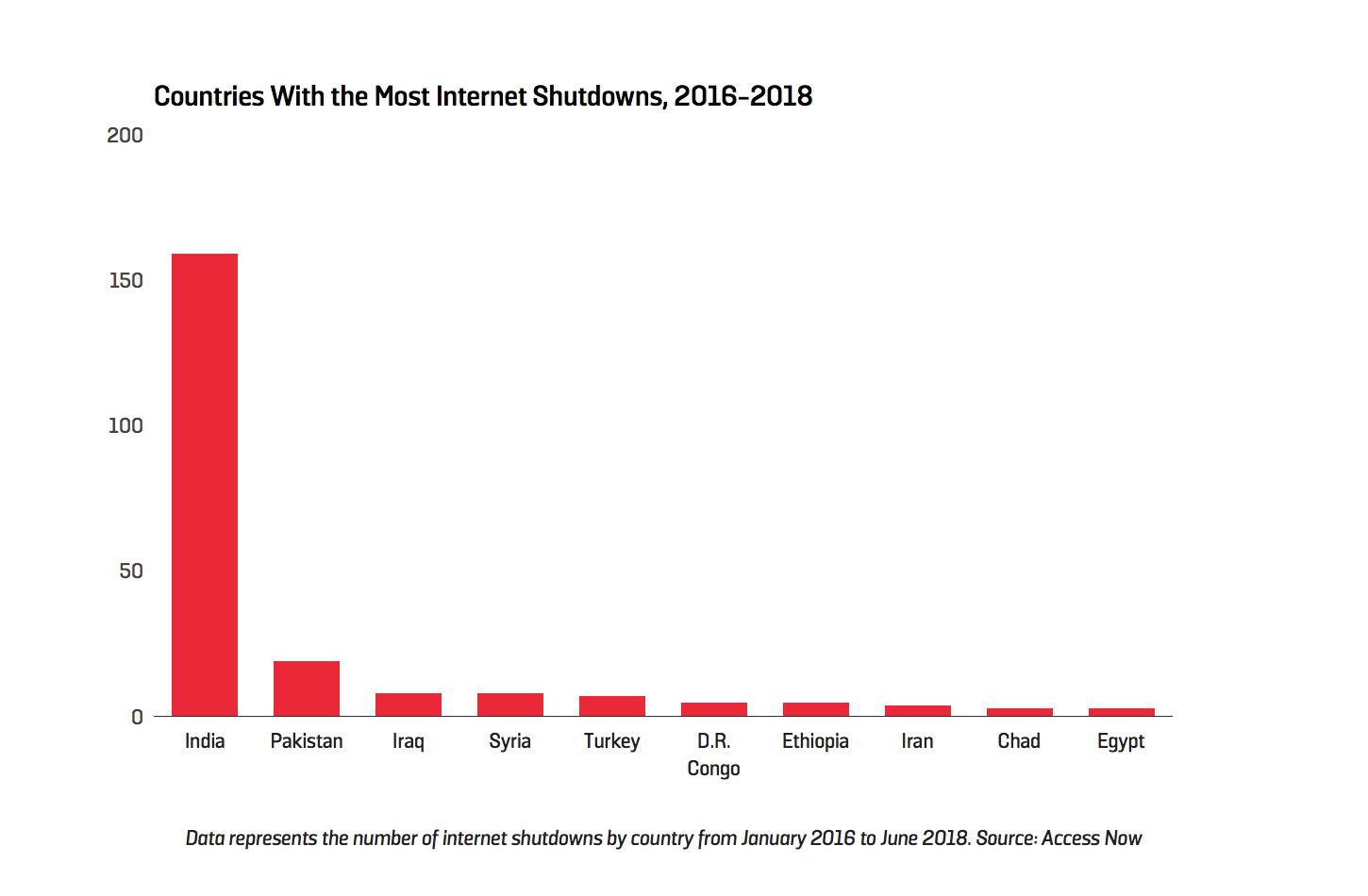 Ahead of the decision to strip India-administered Kashmir of its special status, the Indian government shut down mobile and broadband services in the region over the weekend. Internet service has been suspended 53 times in Jammu and Kashmir this year.

In large part due to service suspensions in Kashmir, India leads the world in internet shutdowns. Between 2016 and 2018, it recorded more than Pakistan, Iraq, Syria, Ethiopia, and Iran combined.

For more news and analysis on stories like this, subscribe to South Asia Brief, delivered on Tuesdays.

Turkmenistan’s president, Gurbanguly Berdimuhamedov, has resurfaced on state TV after a public absence that had fueled death rumors. The government insisted he was on vacation, and he was shown driving a rally car near the landmark Hell’s Gate crater.

NEW FOR SUBSCRIBERS: Want to read more on this topic or region? Click + to receive email alerts when new stories are published on Economics, United States, China