Why South Asia? It’s home to more than 1.8 billion people—nearly one-fourth of the world’s population—and it gets a disproportionately tiny amount of media attention. South Asia is one of the poorest and fastest-growing regions on Earth. It is being transformed by technology: An estimated four South Asians connect to the internet for the first time every second. But its countries are also mired in corruption and struggle with press freedom.

South Asia represents a complex set of cultures, cuisines, languages, and religions. We’re here to make sense of it all for you. Allow us to introduce ourselves: Ravi Agrawal is FP’s managing editor and the author of India Connected, and Kathryn Salam is FP’s deputy editor.

Why South Asia? It’s home to more than 1.8 billion people—nearly one-fourth of the world’s population—and it gets a disproportionately tiny amount of media attention. South Asia is one of the poorest and fastest-growing regions on Earth. It is being transformed by technology: An estimated four South Asians connect to the internet for the first time every second. But its countries are also mired in corruption and struggle with press freedom.

South Asia represents a complex set of cultures, cuisines, languages, and religions. We’re here to make sense of it all for you. Allow us to introduce ourselves: Ravi Agrawal is FP’s managing editor and the author of India Connected, and Kathryn Salam is FP’s deputy editor.

If you like the newsletter, please get your friends to sign up here. And if you have feedback, we’d love to hear from you at newsletters@foreignpolicy.com.

When New Delhi announced this week that it would revoke Article 370, the constitutional provision that gave some autonomous powers to India-administered Kashmir, the declaration was unilateral. There were there no parliamentary consultations, and key Kashmiri politicians were placed under house arrest over the weekend to prevent them from reacting in public.

Why now? Prime Minister Narendra Modi’s decision should not be a surprise: Revoking Article 370, as well as another law that bars nonresidents from buying land in Jammu and Kashmir state, was part of Modi’s campaign manifesto. But why act this week? One theory, according to senior government sources cited by the Hindu, suggests that New Delhi brought forward its plans after U.S. President Donald Trump falsely claimed that Modi approached him to mediate India’s dispute with Pakistan over Kashmir.

There are other possible factors: The decision could have been timed for India’s Independence Day celebrations on Aug. 15, or it could have been designed to distract from growing concerns about the health of India’s economy.

Blackout. If there has been little news out of Kashmir, it’s because New Delhi planned it. On Aug. 4, internet and telephone landlines across the state were shut down. As FP’s C.K. Hickey reports, there is precedent: India has the highest number of internet shutdowns in the world—more than Syria, Iraq, Iran, and Pakistan combined. Regular Kashmiris face an immense impact on their lives and livelihoods.

What’s next? While several opposition parties support Modi’s decision, there may yet be a challenge from the country’s Supreme Court. And while the prime minister’s long-term plan could be to populate Muslim-majority Kashmir with Hindus from other parts of the country, there will likely be resistance in the restive Kashmir Valley. India has already moved tens of thousands of new troops to the region.

Pakistan’s Trump card? In an address to Parliament on Tuesday, Pakistani Prime Minister Imran Khan said he might approach the U.N. Security Council to oppose New Delhi’s move, fearing that India may “initiate ethnic cleansing in Kashmir to wipe out the local population.” He has already called in a favor that Trump promised him during their meeting in the White House last month: “President Trump offered to mediate on Kashmir. This is the time to do so,” Khan said. We’ll see whether Trump takes the bait—and whether Pakistan reacts in other ways.

Let’s make a deal. A peace agreement between the Afghan government and the Taliban may be close at hand. Kabul expects the United States to withdraw its troops from Afghanistan—one of the Taliban’s last conditions for direct talks—and named a negotiating team last week. “If the Taliban do their part, we will do ours, and conclude the agreement we have been working on,” tweeted Zalmay Khalilzad, the U.S. peace envoy.

India’s instant divorce ban. In some Islamic traditions, a man may instantly divorce his wife by saying the word “talaq” (Arabic for divorce) three times. Although India’s Supreme Court outlawed the practice in 2017, it survived. India has moved to stamp it out entirely with a bill that would make “triple talaq” a crime. Some hail the move as a women’s rights victory, but its detractors see it as an attempt by the Hindu nationalist government to meddle in Muslim affairs.

Dhaka’s dengue problem. Bangladesh is in the grip of its worst-ever outbreak of dengue fever, which is spread by mosquitoes. More than 17,000 people have contracted the virus this year, and at least 14 have died. (Local media suggests the toll is closer to 50.) While dengue fever had declined globally between 2017 and 2018, this year has seen a sharp increase in cases.

Village bans chhaupadi, period. Although the practice of banishing women and girls to isolated huts when they get their periods has been outlawed in Nepal since 2005, it is still common in rural areas and has led to deaths this year. This month, the remote district of Bungal became the first to destroy its chhaupadi huts and end the tradition. “Chhaupadi has seriously held women and girls in Nepal back,” Sunita Tiwari of ActionAid told the Telegraph.

Last week, in a bid to encourage tourism, one South Asian country announced a plan to waive the visa fee for travelers from 48 countries. Which was it?

India hits a speed bump. Maruti Suzuki, India’s biggest car manufacturer, has reported a 36 percent year-on-year decline in sales—its sharpest drop in two decades. According to Live Mint, the auto industry accounts for nearly half of the country’s manufacturing output. Maruti’s troubles add to mounting evidence of a slowdown and credit crunch in India’s economy.

Fake news fix? India is WhatsApp’s biggest global market, with more than 400 million users, and WhatsApp has introduced a new feature marking frequently forwarded messages for its Indian users. The label appears after a message has been circulated more than five times and is aimed at stopping the spread of misinformation. In FP, the journalist Raksha Kumar writes about how India’s media can no longer speak truth to power.

Bangladesh rising. Foreign direct investment in Bangladesh rose by 68 percent to a record $3.61 billion last year, according to the United Nations Conference on Trade and Development. Bangladesh’s GDP expanded by 8.1 percent for the year ending June 30, making it Asia’s fastest-growing economy.

Coffee tragedy. V.G. Siddhartha, the founder of the Indian chain Café Coffee Day, was found dead in the Netravati River near Mangalore last week. The company released what appears to be a signed suicide note in which Siddhartha wrote, “I have failed”—a reference to his company’s financial troubles. India’s “Coffee King,” as he was known, founded Café Coffee Day in 1996 and grew it to include 1,700 outlets.

The coffee industry’s struggles in India highlight how its population has yet to build much of a caffeine habit. As shown below, the average Indian consumes only a fraction of the amount of coffee as Europeans or Americans. 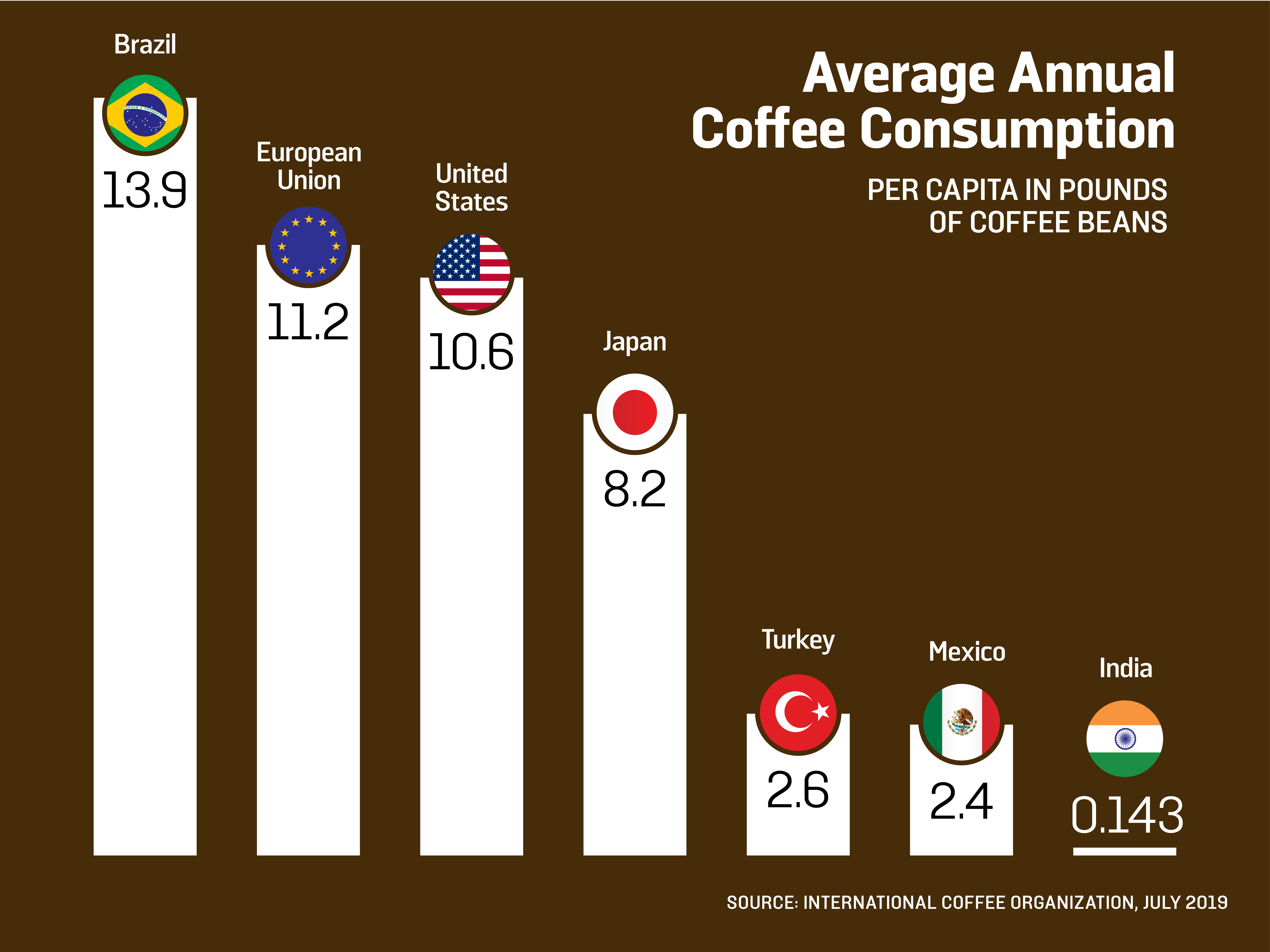 Guns for trees. Guns don’t grow on trees, but in the Indian district of Ferozepur, they might as well. Officials there have introduced a rule that applicants for a firearm license must plant at least 10 trees and provide proof that they are taking good care of the saplings. There have already been 100 applications, and the local government hopes the measure will result in 12,000 new trees each year.

Influencers for good. It isn’t all bad news between India and Pakistan. This month, a Pakistani freelance writer won a journalism award in India for his Instagram project, Everyday Pakistan, in which he tries to counter stereotypes about his country. The project was inspired by Everyday Mumbai, which documents life in India’s largest city.

Recommendation. With the future of Kashmir uncertain, one might do well to look to its literary past. A new collection of poetry, The Mystic and the Lyric, brings together the work of four Kashmiri female poets—Lalded, Habba Khatun, Arnimal, and Rupa Bhavani—who lived between the 14th and 18th centuries. Household names in Kashmir today, the women shaped the Kashmiri musical and mystical traditions.

Tourism to Sri Lanka has declined in the wake of the Easter bombings in April. In a bid to boost the industry and revenue, Prime Minister Ranil Wickremesinghe reassured travelers that the country has beefed up security and announced that visitors from almost 50 countries would be exempt from one-month visa fees starting Aug. 1. The deal lasts for six months.

Thanks for reading. See you next Tuesday!

We welcome your feedback at newsletters@foreignpolicy.com. For more from FP, subscribe here or sign up for our other newsletters.

Correction, Aug. 6, 2019: An estimated four South Asians connect to the internet for the first time every second. A previous version of this story contained an incorrect estimate.