How the CIA Aims to Keep a Footprint in Afghanistan

Even as talks with the Taliban point to a cease-fire, a CIA-trained force will likely continue its shadow war, often at the expense of civilians.

KHOST, Afghanistan—The muezzin had just called for the morning prayer when soldiers brandishing guns jumped off their Toyota Hiluxes, surrounded Noor Walli Khan’s house, knocked down the door, and entered the dark rooms where his family slept.

Minutes later, they had tied everyone’s hands and feet and started pouring gasoline over the family’s only car. Khan, 42, watched as the vehicle went up in flames. His children hid in the rooms left devastated by the raiders.

The surprise raid was the handiwork of the Khost Protection Force (KPF), a unit of Afghan soldiers trained, equipped, and funded by the CIA, operating mainly in the eastern province of Khost. The KPF’s U.S.-directed mission: Root out anyone remotely suspected of al Qaeda or Taliban ties. Interviewed after the raid, Qais, a 29-year-old KPF commander and drone operator who asked to be identified by a pseudonym, remarked casually that he himself was sure Khan’s family was innocent. But he shrugged off the raid as a warning that the CIA directed him to deliver.

“Our main objective is to bring security and to remove Taliban threats in Khost,” he explained, puffing out smoke from his cigarette. The CIA did not respond to several requests for comment.

At the negotiating table, the war with the Taliban may be nearing a formal end. “We have made excellent progress,” U.S. envoy Zalmay Khalilzad tweeted on Monday, suggesting he was close to “completing a potential deal with the Taliban that would allow for a conditions-based [U.S.] troop withdrawal.” But, quietly, the CIA is making plans to leave behind proxy forces that will remain long after any formal U.S. pullout. And in the long run, these forces could be a wild card that determines the extent of Taliban influence in post-NATO Afghanistan—and possibly even the survival of the government in Kabul, which is not current party to the peace talks. 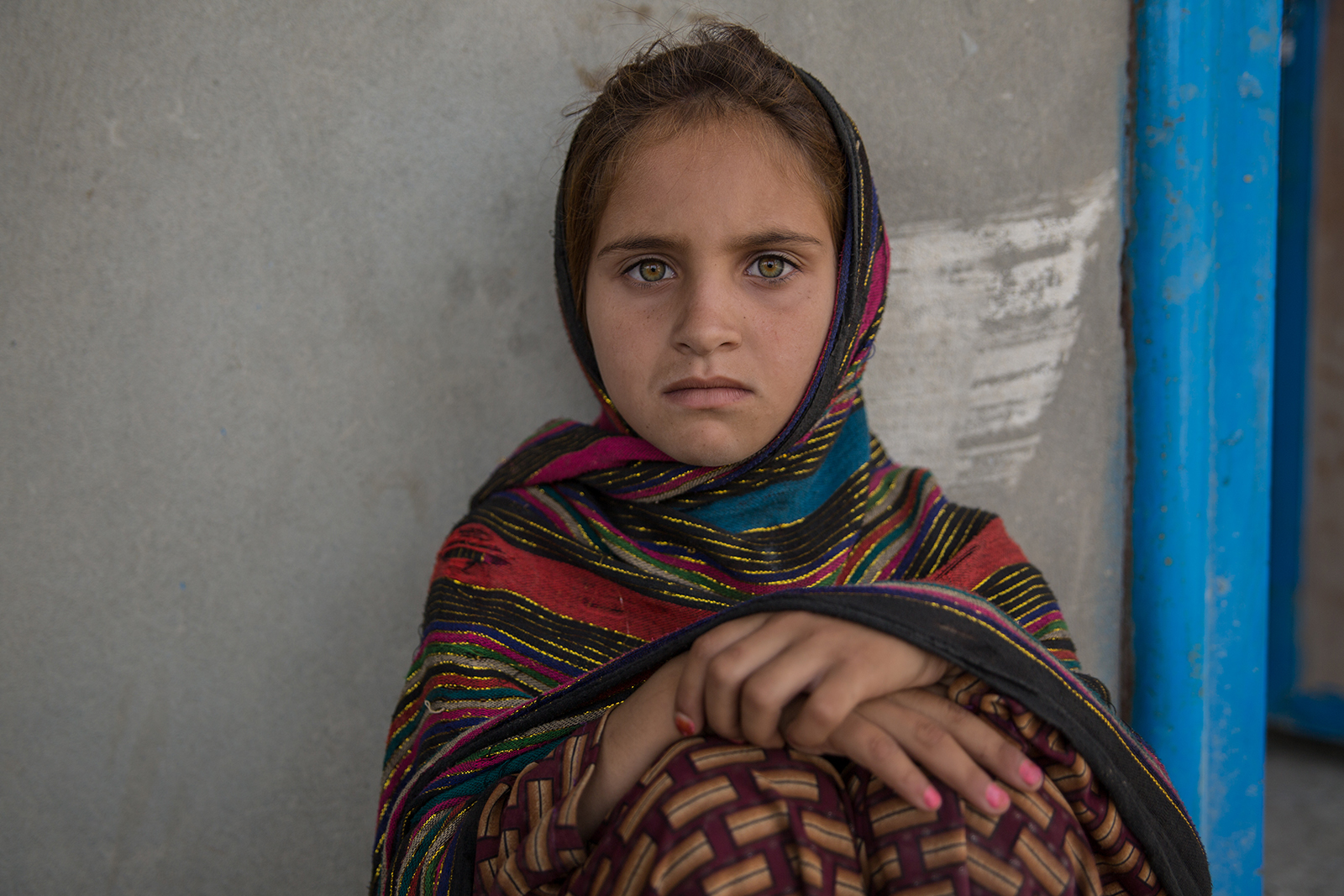 Mariam Zaman, 8, seen in Khost city on July 28, witnessed her house being blown up in the Sabari district. Stefanie Glinski for Foreign Policy

The KPF is the most prominent of several CIA-sponsored elite paramilitary forces along the porous border with Pakistan, a major supporter of the Afghan Taliban. The KPF emerged out of a militia in the Afghan Military Forces and became a U.S.-funded force even before the Afghan National Army was created. Because Khost has a long border with Pakistan, one of the KPF’s main tasks is to secure the border and cap the flow of terrorists. While they started in Khost, they also operate in other Taliban-heavy provinces, such as neighboring Paktia, Ghazni, and even far away in Jowzjan, according to Qais and other KPF soldiers interviewed by Foreign Policy.

As far as targets go, Qais said the KPF merely carries out the missions the CIA orders it to complete—which are supposed to be based on thorough intelligence. “We’re better trained than the Afghan National Army,” he said. “The helicopters and drones belong to the U.S., but we regularly receive requests to support them.” According to Qais and other fighters, the CIA is said to have at least 6,500 KPF fighters in Khost, many of whom learn how to fly surveillance and striker drones, and to operate house raids such as the one on Khan’s family. (A U.S. Air Force lieutenant detailed to the mission confirmed that some Afghans are being trained to operate drones.)

Khan, a village elder and farmer, said his family has endured countless such raids by the KPF, locally referred to as the “campaign,” which he described as often being a mixed team of Americans and Afghans. “I can distinguish them from afar by the way they move and how their bodies are shaped,” Khan said. “The KPF destroyed everything. They accuse us of having al Qaeda links, but none of it is true.”

Both sides—the United States and the Taliban—have stepped up military activity during the peace talks, very likely as a way of adding pressure. The Taliban claimed responsibility after a car bomb exploded outside a police station in Kabul on Wednesday, killing at least 14 people. Meanwhile across the country, U.S. airstrikes have increased by at least 15 percent this year, with 2,011 attacks between January and April alone.

In the first six months of 2019, airstrikes caused 363 civilian deaths and 156 injuries, representing a 39 percent increase compared to last year, according to a new United Nations report. Civilian casualties from pro-government forces—mainly through airstrikes and house raids—have outnumbered those killed by the Taliban. In the first half of the year, nearly 4,000 Afghans were killed or wounded by all sides.

The KPF soldiers are extraordinarily well paid with U.S. dollars—especially for Afghanistan—and Qais, like most fighters, said he joined the KPF for money. His payout—now a monthly $1,100—by far exceeds local government, aid agency, and army salaries.

Qais arrived for his interview last month in a busy market area in Khost city, beard trimmed, his black hair falling into his face. Wearing a traditional Afghan tunic, he said that he wanted to meet in person, knowing that his phone would be tapped and speaking to journalists was strictly forbidden by the CIA.

“Money is part of the reason why everyone wants to join,” he said, adding that he also considers it a service to Afghanistan. “We’re here to keep the place safe and to fight our enemy.” This enemy, he said, is the Taliban and the Islamic State, as well as Pakistan, Iran, and China, yet what the CIA’s stake is in Afghanistan, he isn’t so sure. “They don’t share everything with us,” he said.

According to an Afghan security official connected with the KPF operation, “A lot of money is spent on the unit, because they are doing the most difficult jobs—those that no American would do. They know the terrain, are familiar with the region and culture, and have the best equipment, but their commands come from the CIA. They make mistakes but have largely succeeded. Besides that, mistakes can easily be diverted away from the U.S. and blamed on the KPF.”

He added that they were trained to go after high-profile targets, and many of their operations were successful. “Terrorists are afraid of them,” he said.

Yet with fighting picking up across the country—last year saw the deadliest yet since U.N. records have been kept—a growing number of people in Khost accuse the KPF of human rights violations. Khan is one of them, though his family was lucky to get away unharmed. He went to the KPF headquarters in Khost city to complain about the raid—to no avail.

His 7-year-old nephew, Gul Rahim, who witnessed the raid, said he hasn’t been able to sleep properly ever since. “At night, I hear the drones and helicopters fly over our compound. The KPF has come for us before, and I’m scared they will return,” the boy said quietly, sitting on the hood of the burned-out car.

By routinely targeting innocents, it’s possible that the KPF’s tactics could backfire, radicalizing portions of the very population it intends to pacify or frighten into submission—thus perpetuating the KPF’s mission in a vicious cycle. 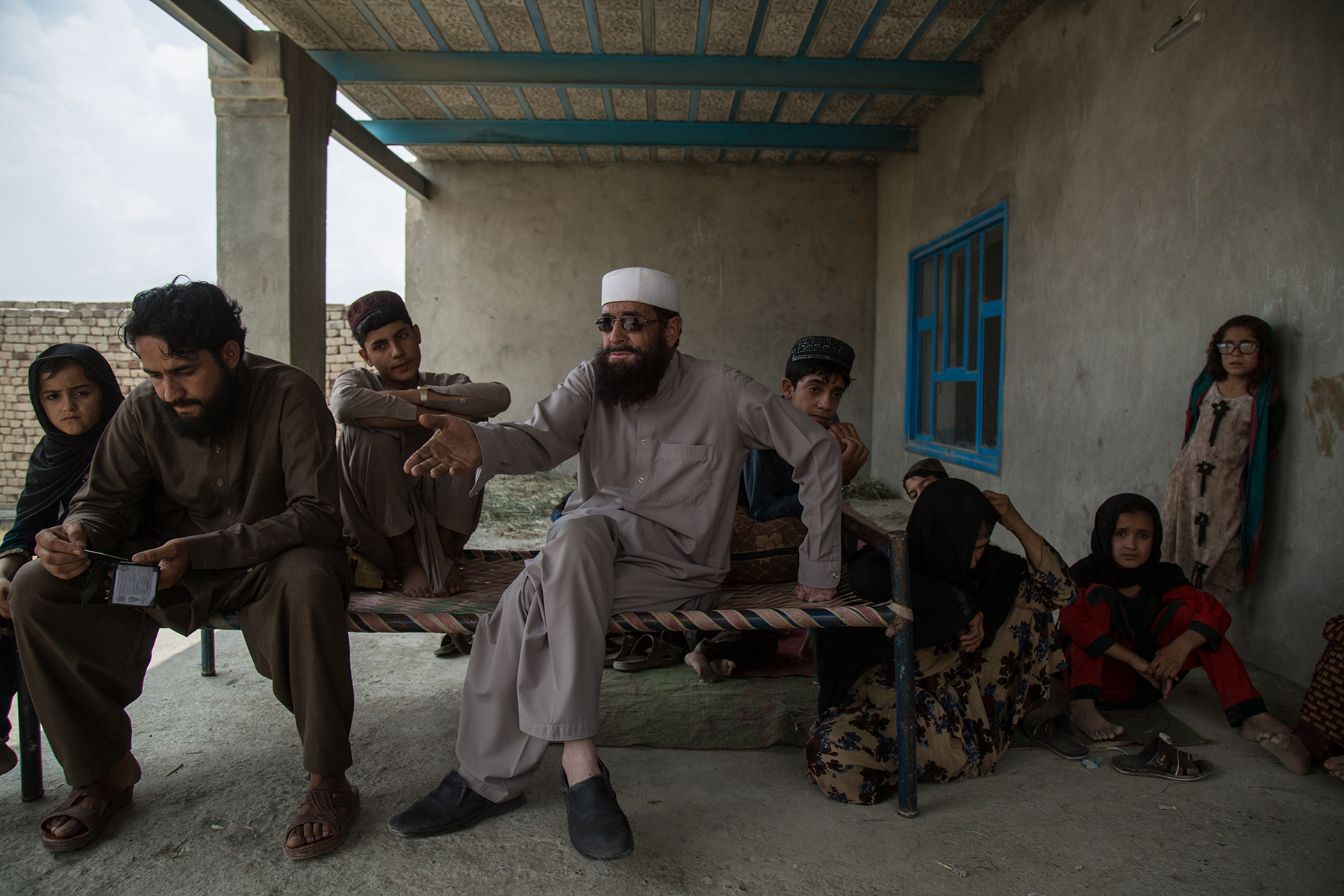 Mohammed Zaman, 67, (center) and his family now live at a rental house in Khost city, seen here on July 28. He says his house was blown up by the KPF. Stefanie Glinski for Foreign Policy

“When it comes to recruitment—both within the Taliban and the Islamic State—it’s often a psychological play,” said Mahmood Marhoon, an author and researcher at Kabul University. “They distribute videos of Americans killing innocent Muslims and try to build up hate among people. And such stirring up of hate—it works for some people.”

In rural Noorai village, in Khost’s Sabari District, 8-year-old Mariam Zaman wasn’t as lucky as Khan’s family. Ten months ago, in the early morning hours, KPF soldiers entered her compound, climbed on the roof, and dragged her and her family—a total of 37 people—outside into the cold, installing explosives throughout the house.

“They pushed us away with their guns,” Mariam, a green-eyed girl in a striped headscarf, remembered, holding on to her grandfather Mohammed Zaman, 67. The shockwave and shattering blast came simultaneously, drowning out the family’s screams and cries.

“We had just finished construction on the house and spent about $40,000,” Zaman said, sitting on a bed outside his temporary home in Khost city that he rents for 10,000 Afghani (about $125). “No one is helping us now,” he added. 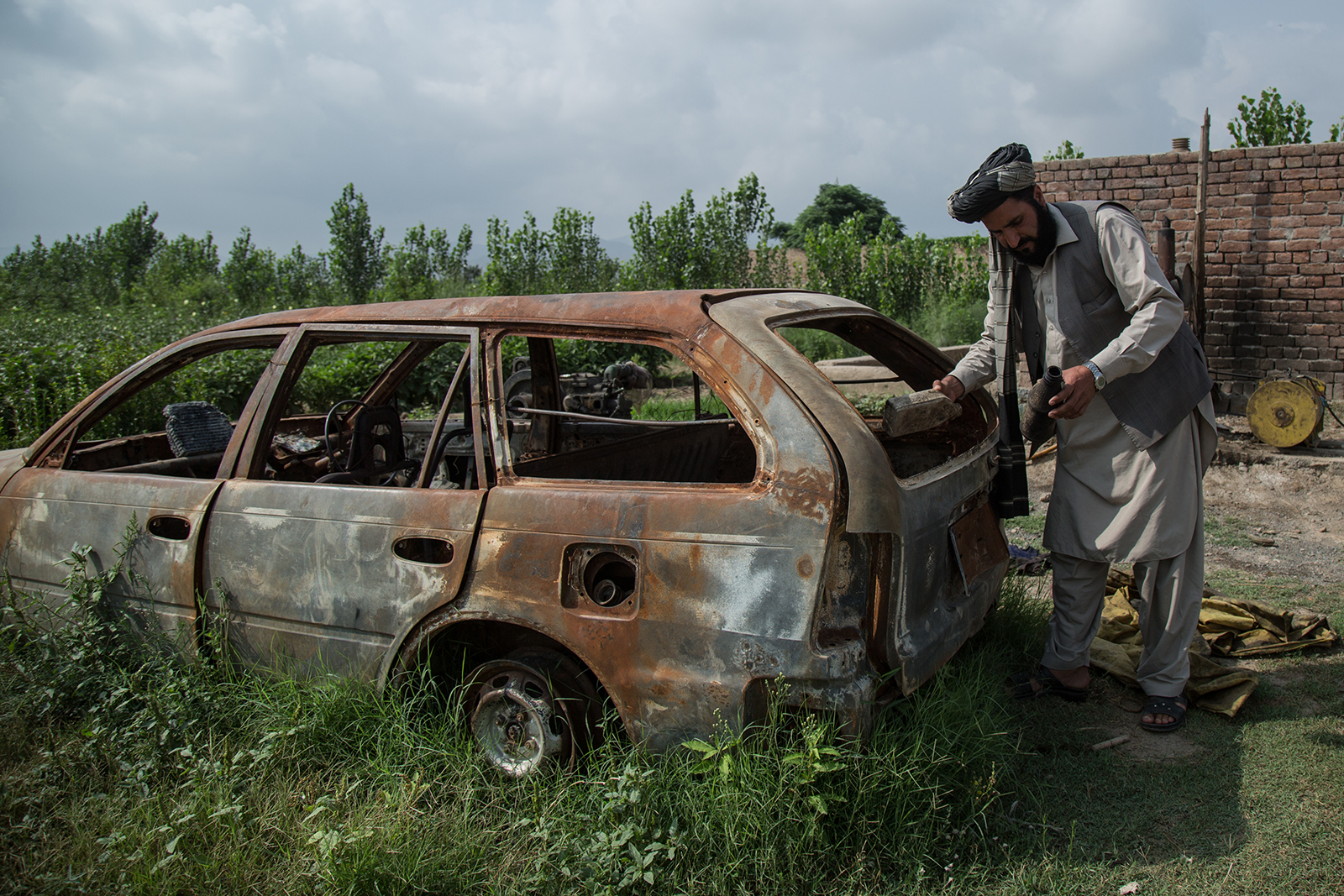 Noor Walli Khan, 42, stands near his burned-out car on July 28. He says his house was raided by the KPF and his car was set on fire, even though he says his family has no links to militant groups. Stefanie Glinski for Foreign Policy

Noorai village, home to a number of Taliban families, has seen countless raids over the years, and the KPF had warned Zaman. “My son joined the Taliban years ago but hasn’t been living in Khost,” he said, contending that his family had nothing to do with his son’s activities. “He didn’t even live with us, and we always followed the KPF’s demands to stay away. They still came for us.

“I’m angry, but I have no other option but to stay calm. Others think it’s better to fight back to save your honor, even if it means getting killed.”

Indeed, in Afghanistan, it’s not uncommon for split allegiances within families, with blood ties running deeper than political views. Mohammed, 28—his last name is omitted for security reasons—embodies just that. He joined the KPF five years ago, receiving training from the CIA. Today he sits crammed in a room with 14 family members—among them a government soldier and an uncle who works for the Haqqani network, considered to be one of the most violent branches of the Taliban.

But amid the criticism, the KPF’s overall support from pro-government forces and some people in Khost has grown over the past years, with both the United Kingdom and France now financially backing the group, according to a security official. As a standalone union, neither fully integrated into the U.S. nor the Afghan armies, the KPF continues to raise the stakes of its shadow war.

And with continued foreign investment—besides that of the CIA—its future could be secured, even after a U.S.-Taliban deal is settled. 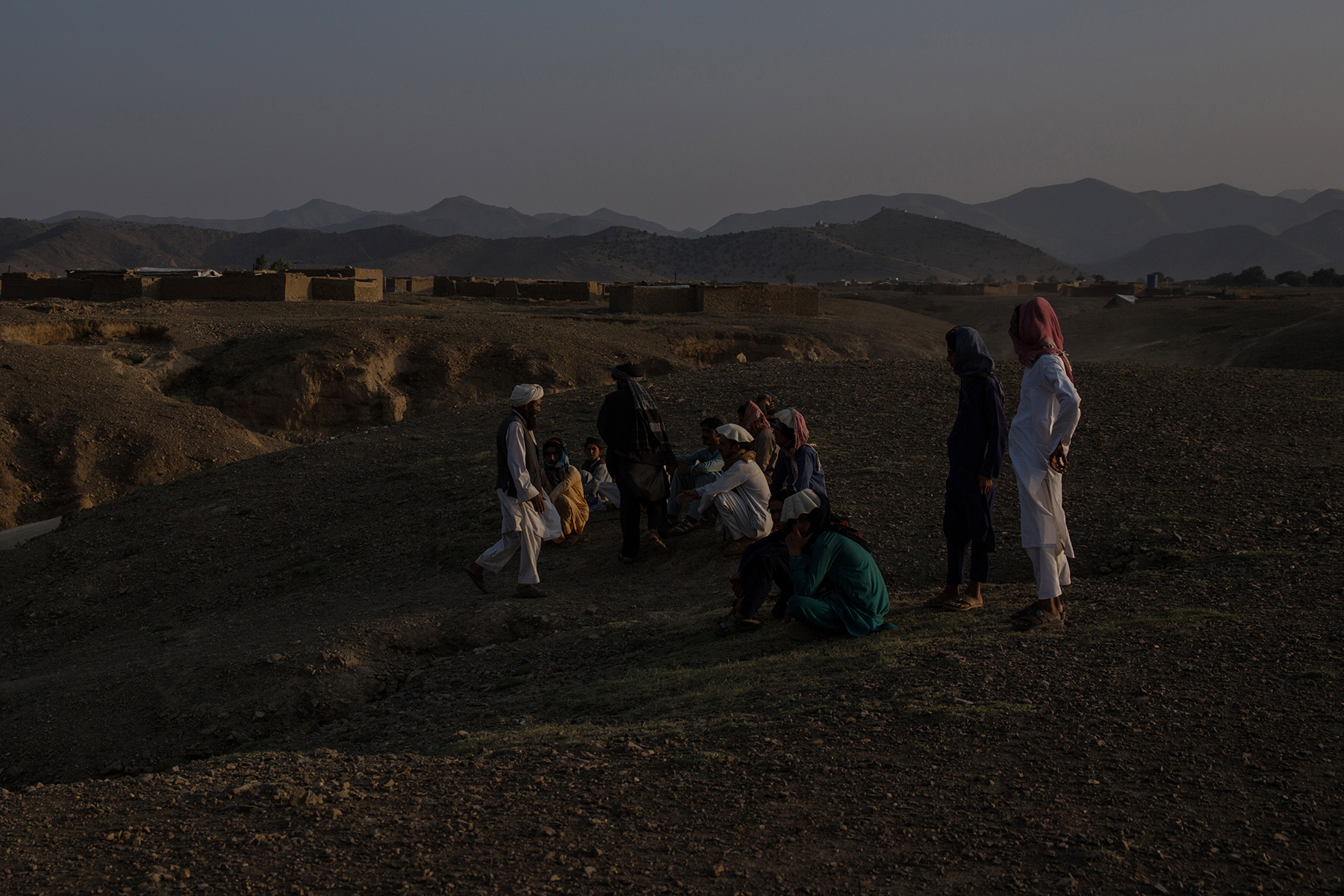 The rural province of Khost in eastern Afghanistan, seen on July 8, is the birthplace of the CIA-funded, equipped, and trained KPF. Stefanie Glinski for Foreign Policy

Qais, the KPF commander, said he plans to eventually apply for a U.S. special immigrant visa—given to Afghans working alongside American forces, the U.S. Embassy, or U.S.-funded humanitarian programs—which would resettle him in the U.S. permanently. “Money and the prospects of living safely in the U.S. one day drives many,” he said.

But of the KPF itself, Qais said he is certain of one thing: “If America leaves, we will remain.”