Truth and Lies in Kashmir

Welcome to the second edition of Foreign Policy’s weekly South Asia Brief, where we bring you essential news and analysis from India, Pakistan, Bangladesh, Afghanistan, Sri Lanka, Nepal, Bhutan, and the Maldives. We’d love to hear from you at newsletters@foreignpolicy.com. To get this in your inbox, sign up here.

The highlights this week: The tense lockdown continues in Kashmir, former Indian Foreign Minister Sushma Swaraj dies, no deal reached in Afghanistan, and a Rajapaksa returns in Sri Lanka.

Welcome to the second edition of Foreign Policy’s weekly South Asia Brief, where we bring you essential news and analysis from India, Pakistan, Bangladesh, Afghanistan, Sri Lanka, Nepal, Bhutan, and the Maldives. We’d love to hear from you at newsletters@foreignpolicy.com. To get this in your inbox, sign up here.

The highlights this week: The tense lockdown continues in Kashmir, former Indian Foreign Minister Sushma Swaraj dies, no deal reached in Afghanistan, and a Rajapaksa returns in Sri Lanka.

As the internet shutdown in India-administered Kashmir enters its 10th day, journalists have found creative ways to transmit videos from the region. On Friday, the BBC ran one that showed Indian police firing tear gas at protesters in Srinagar, Kashmir’s summer capital. The video also captured thousands of people demonstrating for Kashmiri independence after Friday prayers.

A government spokesperson called the video “fabricated.” Other officials showed to reporters images of Kashmiris praying peacefully. “There have been some minor localized protests of a routine nature,” one press release sent to reporters on WhatsApp stated. Yet media reports continue to contradict the government line.

What’s next? In a rare prime-time address to the nation last week, Prime Minister Narendra Modi argued that his decision to revoke Kashmir’s autonomy was an economic imperative. (Full transcript here.) The Confederation of Indian Industry has already announced a summit to showcase business opportunities in the region.

But it won’t be that simple: Kashmir is landlocked, with poor transport infrastructure. Internet blackouts will hardly boost confidence. Once New Delhi lifts its security blanket, violence and unrest could ensue.

Campaign promises. In revoking Article 370 of the Indian Constitution and bringing Kashmir more directly under his control, Modi has delivered on a key campaign pledge. Few predicted it would happen so soon after he won a second term in May. The question now is which other election promises of the Bharatiya Janata Party (BJP) will be realized—and how soon. Modi has said he will implement a controversial National Register of Citizens and build a temple to the Hindu god Ram at the site of a demolished mosque. Either move would test religious harmony in the world’s largest democracy.

The dynasty. After a crushing defeat to Modi’s BJP in national elections this year, Rahul Gandhi resigned as leader of the opposition Indian National Congress. It seemed like the moment Congress might move beyond the Nehru-Gandhi dynasty that has ruled the party for most of India’s post-independence era. Yet over the weekend, Sonia Gandhi, Rahul’s mother and the party leader from 1998 to 2017, was named interim president.

Back to the future. Voters will see a familiar name on the ballot in Sri Lanka’s presidential elections at the end of the year. The opposition Sri Lanka People’s Front selected as its candidate Nandasena Gotabaya Rajapaksa, the brother of former President Mahinda Rajapaksa. Gotabaya seems to be a national security pick in the wake of the April terrorist attacks. Serving as defense secretary under his brother, he’s known for his role in defeating the Tamil Tigers—but he has also been accused of human rights abuses during that campaign.

No deal in Afghanistan. Although an agreement in the peace talks in Afghanistan seemed to be close at hand last week, the latest round of discussions ended Monday without a deal. Neither side provided details, but both the U.S. and Taliban teams said they needed to go back and consult with their leaders on the next steps.

In memoriam. Former Indian Foreign Minister Sushma Swaraj died last week. She was 67 years old. The BJP leader was known for her diplomacy and kindness on Twitter, where she amassed more than 13 million followers.

Eid Mubarak. Over the weekend, hundreds of millions of Muslims around the world marked Eid al-Adha, one of the biggest holidays of the year. In parts of South Asia, this year’s celebration was not without controversy. Authorities in India-administered Kashmir banned large gatherings. Across the border in Pakistan, politicians called for stripped-down festivities in solidarity with Indian Kashmiris. Meanwhile, those in Bangladesh had other problems to worry about as massive traffic jams ensnarled the country and kept travelers away from their loved ones.

Indonesia is home to more Muslims (about 220 million) than any country in the world. But several South Asian nations are not far behind. Which of these countries has the world’s second-largest population of Muslims?

Interest rates. India’s central bank cut rates last week by an unusual 35 basis points (0.35 percent). Gov. Shaktikanta Das said a mere quarter-point reduction would have been “inadequate” to boost the country’s flagging economy. On Sunday, in an interview with the Economic Times, Modi appealed to banks to pass on the lower interest rates to borrowers.

India’s economy grew by 5.8 percent in its last reported quarter—its slowest pace in more than a year. The country’s slowdown likely means that India won’t meet this year’s growth projection by the Asian Development Bank in April. As the chart below shows, Bangladesh is expected to be the fastest-growing economy in South Asia this year. 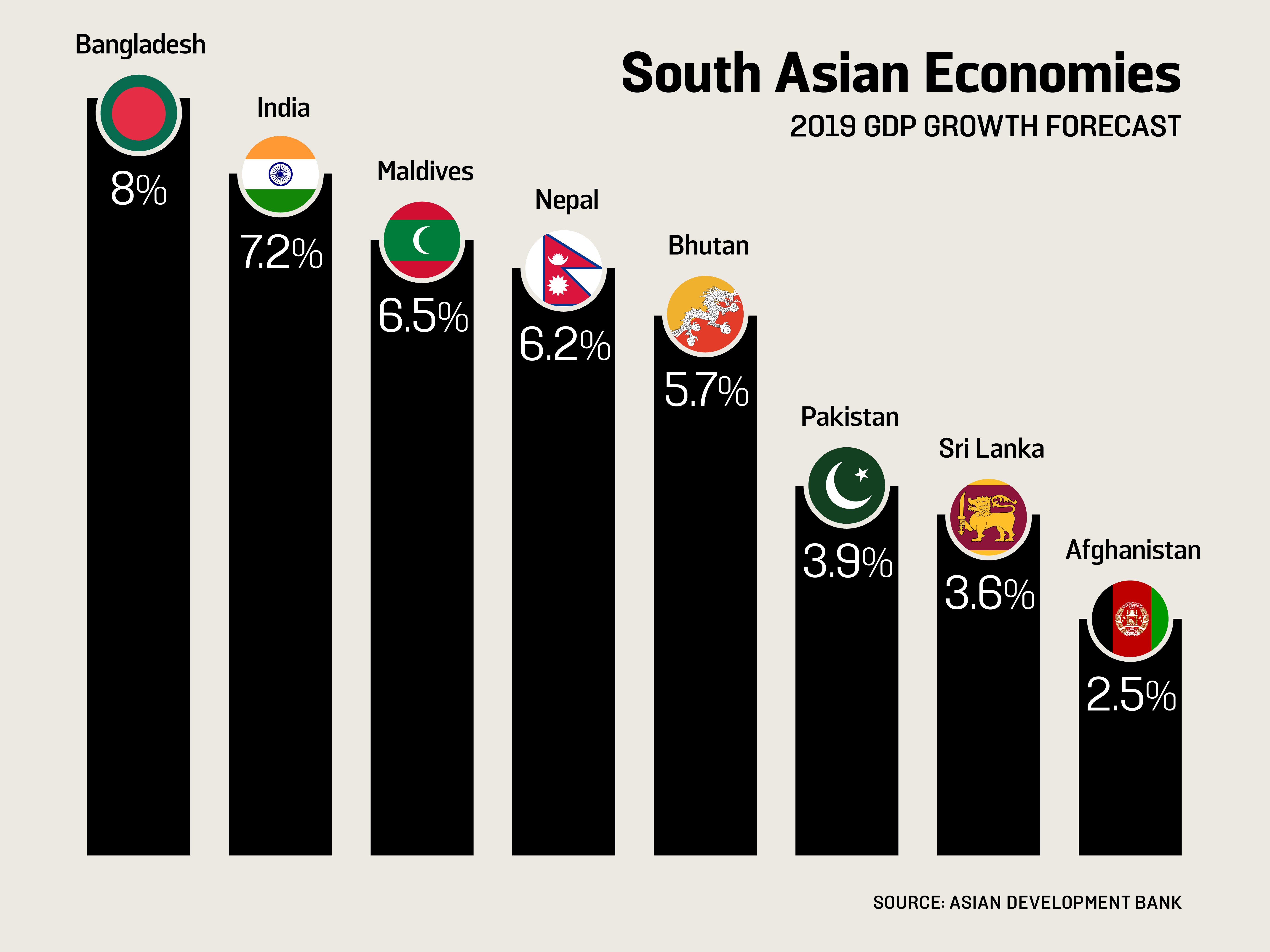 A big test for Netflix. The second season of Sacred Games, a popular streaming Indian drama, drops on Netflix on Aug. 14. It comes at a time when Netflix is betting big on India: Last month, the streaming service announced a mobile-only subscription plan for less than $3 per month in a bid to attract the country’s nearly 500 million smartphone users. According to CyberMedia Research, Netflix already has 1.3 million subscribers in India.

Broadband for nothing, internet for free. In 2016, the billionaire Mukesh Ambani’s company Jio disrupted India’s cellular internet market by offering free data for six months. JioFiber, the company’s new broadband service, plans to use a similar strategy when it launches next month: New customers will get a free HD or 4K TV.

Sand wars. Sand makes modern life possible. “When you got up this morning, you flicked on the light, provided by a glass bulb made from melted sand,” Vince Beiser writes in The World in a Grain: The Story of Sand and How It Transformed Civilization. “You meandered to the bathroom, where you brushed your teeth over a sink made of sand-based porcelain, using water filtered through sand at your local purification plant. Your underwear snapped into place thanks to an elastic made with silicone, a synthetic compound also derived from sand.” Unfortunately, we’re running out. In India, the supply and demand problem has led to the rise of sand mafias—and that’s just the beginning in the coming sand wars. Read an excerpt of Beiser’s book here.

Recommendation. Set in 2028, Numair Atif Choudhury’s debut novel, Babu Bangladesh!, weaves together fictional interviews, journal entries, and guesswork from an intrepid biographer to piece together the life story of its titular character. Babu Abdul Majumdar is a mystic and activist-turned-politician who mysteriously disappeared after being accused of stealing government funds. Unknotting the various strands of Majmudar’s life, the biographer patches together the story of Bangladesh’s own coming of age.

According to 2015 data from the Pew Research Center, which was republished in April, India has about 10 million more Muslims than runner-up Pakistan. Pew projects that India will outstrip Indonesia to take the No. 1 spot by 2050. By then, an estimated 311 million Muslims—11 percent of the total global Muslim population—will live in India.

Thanks for reading. See you next Tuesday!