This week: Growing violence in Hong Kong, a Chinese Communist party retreat, and a Christmas truce in the trade war.

We welcome your feedback at newsletters@foreignpolicy.com. To get this in your inbox, sign up here.

After Hong Kong Airport Protests, Beijing Turns Up the Propaganda

Flights resumed today at Hong Kong International Airport after two days of shutdowns following clashes between protesters and police. It’s still unclear whether the airport actually had to be closed or whether the authorities did so in a bid to heighten the impact of the disturbance. (The airport said it had an injunction limiting where the anti-government protests could take place.)

On Tuesday, the protests in the airport grew violent. A group of demonstrators attacked two men they assumed to be deliberate infiltrators. One may have been a mainland police officer, while the other was a journalist for the ultra-nationalist Global Times. The event has been a propaganda gift to Beijing, with the videos shared all over mainland Chinese sites and social media.

Meanwhile, China has again ratcheted up its official rhetoric, describing the protesters as “terrorists.” The official Chinese Communist Party newspaper, the People’s Daily, has called for “harsh justice” against the protesters. The odds of a direct mainland intervention now seem greater than ever, as Jude Blanchette writes for Foreign Policy.

An eye for an eye. This weekend, a young medic was hit in the face by a projectile fired at close range by the Hong Kong police and may lose sight in one eye. The incident has become a symbol and a rallying point for protesters, who are becoming more willing to use violence against any police officer they catch off guard.

The United States weighs in. Prominent U.S. politicians from both parties have come out in support of the Hong Kong protesters. That’s a risky move, as China is determined to see a U.S. “black hand” behind the protests. Language like that of House Minority Leader Kevin McCarthy (“We see you waving the American flag, and we hear you singing our national anthem”) will only fuel Beijing’s paranoia. Even more disruptive was Trump’s tweet alleging that Chinese troops were gathering on the border with Hong Kong—based on, as far as anyone can tell, his seeing a dubiously sourced video clip.

Can Hong Kong survive as Asia’s business hub? The odds are looking worse as chaos becomes a permanent condition rather than an anomaly. Hong Kong stocks fell to their lowest level in seven months this week. A prominent lawyer, Dan Harris, is already calling time on the city. Moreover, Hong Kong’s status as a financial hub has depended on the robustness of its colonial-era legal system, which protesters are fighting to defend.

A seaside retreat for party officials. Chinese Communist Party leaders and retired officials gathered for an annual retreat at the seaside resort of Beidaihe this week. The event is a chance for the party elite to hack out business in private—particularly important this year given the upcoming anniversary of the foundation of the People’s Republic of China in October. The retreat isn’t official, but it’s hugely important: It was at Beidaihe, for instance, that the ex-party chairman Jiang Zemin is rumored to have signed on to President Xi Jinping’s anti-corruption purges in 2012.

There’s little doubt that the unrest in Hong Kong and the U.S.-China trade war dominated the agenda this year. The big question will be if there are any signs of backlash against Xi amid the challenges.

Coal investments soar. China says it is set to meet its climate goals under the Paris agreement way ahead of target. But new coal mine approvals have quintupled this year. That is bad news for the planet, but it’s a possible sign that the once powerful state fossil fuel sector is recovering. The sector faced years of restrictions due to its close ties with fallen political leaders. (At one point, state oil companies were doing daily checks on critical staff members because so many were being arrested on corruption charges.)

The U.S.-China trust gap. New figures from the Pew Research Center show a big dip in U.S. trust in China, with 60 percent of American respondents indicating they have an unfavorable opinion of China—up from 47 percent a year ago. While there are no reliable equivalent figures for Chinese sentiment, anti-American messages in Chinese media appear to be increasing.

Gun violence declines. Chinese official media report a 20 percent decline in gun crimes after last year’s campaign against illegal firearms—which means all of them. Crime figures in China are largely fictitious, but it’s certainly become much harder for people to get their hands on a weapon after the “gun villages” that specialized in illegal manufacturing were shut down.

Graphic: A Basket of Problems 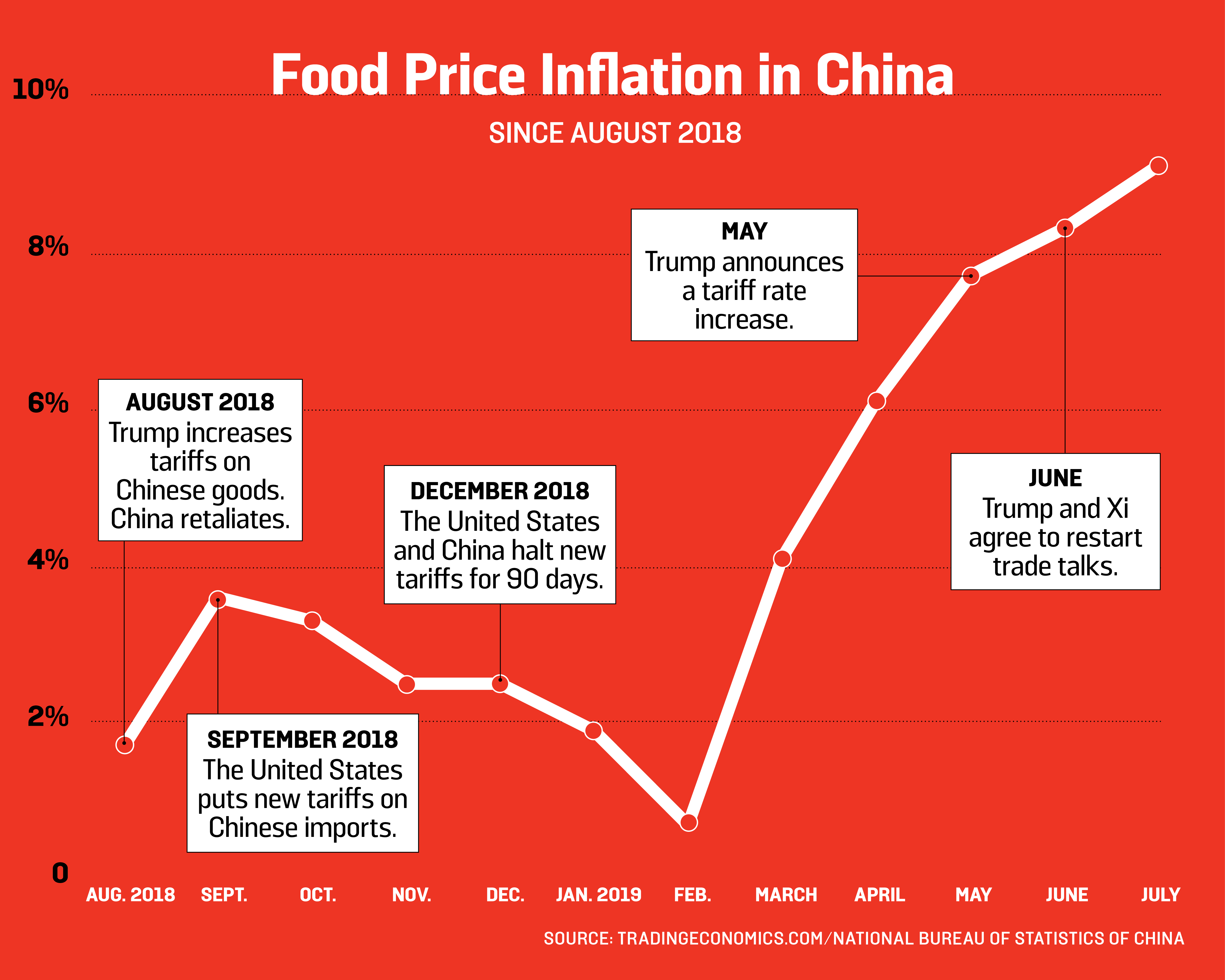 Food prices continue to soar in China, an unnerving trend for the Communist Party leadership. Agriculture is a massive political concern in China, where it is always the focus of the first policy document issued each year. While the inflation has occurred alongside the U.S.-China trade war—two weeks ago, China imposed a total ban on U.S. agricultural imports—the main factor in China’s rising food prices is the Asian swine fever outbreak. Pork prices have jumped by 27 percent, and China claims 1 million pigs have been slaughtered. (Experts say the real figure may be closer to one-third or one-half of the country’s herd.)

A Christmas trade war truce. On Tuesday, Trump said the United States would hold off on new tariffs on Chinese goods until December—after the Christmas shopping boom. The news brought relief to markets, but it highlights the trade war’s information distortion problem. It can appear as though the U.S. side is always the one suffering and then retreating. That’s in part because U.S. markets can respond quickly, unlike China’s highly controlled stock market.

Unfriendly skies. Cathay Pacific, Hong Kong’s flagship airline, has faced repercussions from mainland China after some of its staff indicated support for protesters. Cathay rapidly agreed to remove any staff member who did so from flights to the mainland. With Chinese tourism still on the rise, international air travel is a powerful way for Beijing to impose its political standards, as it did to United Airlines and American Airlines in 2018.

Fashion apologies. Relatedly, luxury firms—most prominently Versace—are the latest to be forced to apologize over China’s favorite shibboleth: the status of Taiwan and Hong Kong. Self-policing on this issue has become necessary for foreign firms in the Chinese market, and luxury goods are experiencing a renaissance in China.

Huawei’s public relations push. The U.S. ban on government contracts with the Chinese firm Huawei officially took effect on Tuesday. But Huawei’s global PR push continues, including hiring yet another prominent Washington lobbyist. U.S. efforts to get others on board have been largely unsuccessful, but British Prime Minister Boris Johnson has reportedly promised to revisit Huawei’s prominent position in the U.K. market.

This important new book by the historian and translator Julia Lovell is vital reading for China watchers at a point when ideological fervor is making a comeback. But it also follows Maoism beyond China’s borders, from the infighting of Western Maoists to the revolutionary violence of India’s Naxalites and the Shining Path in Peru.

In the last days of the Northern Song empire (A.D. 957-1127), the Jurchen people—once the Song’s allies—conquered the northern part of China, founding the Jin empire and leaving the Song holding onto the south. The sack of the Song capital, Kaifeng (then called Bianjing), was one of the most notorious incidents of the invasion. Around 14,000 members of the former court were enslaved en masse, marched north, and sold to the Jurchen. Former royals were sold for eight ounces of gold, according to the Accounts of Jingkang.

The event, known in Chinese as the Humiliation of Jingkang, after the reigning emperor, marks the first time that a sense of national humiliation followed the destruction of a city by foreign invaders in China, setting a template for the later Mongol, Manchu, and Japanese invasions. The best English-language account of the sack of Kaifeng is in Patricia Buckley Ebrey’s biography of Emperor Huizong, one of two unfortunate Song emperors captured by the Jurchen.

Send any tips, comments, questions, or typos to newsletters@foreignpolicy.com. You can find older editions of China Brief here. For more from FP, subscribe here or sign up for our other newsletters.