Kashmir’s Dangerous and Difficult Path Ahead

This week: The U.N. Security Council discusses Kashmir for the first time since 1971, plus stories from Afghanistan, Bangladesh, and Nepal.

Welcome to Foreign Policy’s weekly South Asia Brief, where we bring you essential news and analysis from India, Pakistan, Bangladesh, Afghanistan, Sri Lanka, Nepal, Bhutan, and the Maldives. We’d love to hear from you at newsletters@foreignpolicy.com. To get this in your inbox, sign up here.

The highlights this week: The U.N. Security Council discusses Kashmir for the first time since 1971, a terrorist attack strikes Kabul, and Saudi Aramco buys a giant stake in India’s Reliance.

Welcome to Foreign Policy’s weekly South Asia Brief, where we bring you essential news and analysis from India, Pakistan, Bangladesh, Afghanistan, Sri Lanka, Nepal, Bhutan, and the Maldives. We’d love to hear from you at newsletters@foreignpolicy.com. To get this in your inbox, sign up here.

The highlights this week: The U.N. Security Council discusses Kashmir for the first time since 1971, a terrorist attack strikes Kabul, and Saudi Aramco buys a giant stake in India’s Reliance.

On Friday, the U.N. Security Council discussed the disputed region of Kashmir for the first time in nearly five decades. Although council members didn’t reach any conclusion—failing to issue even the lowest level of action, a statement to the press—holding the meeting was notable in and of itself.

The media game. “The voice of the Kashmiri people … has been heard today in the highest diplomatic forum of the world,” Pakistani Ambassador to the United Nations Maleeha Lodhi said after the session. Indian U.N. Ambassador Syed Akbaruddin disagreed, calling his country’s Aug. 5 move to revoke certain autonomies in India-administered Kashmir an internal matter: “We don’t need international busybodies,” he said.

The factions. Permanent Security Council members France, the United States, and Russia favored keeping Kashmir a bilateral issue between India and Pakistan—a stance that New Delhi has long advocated. But China had called for the meeting, and its U.N. ambassador said India had “changed the status quo in Kashmir, causing tensions in the region.” China’s support for Pakistan’s position is no surprise given the close relations between the two countries. Their attempts to draw international attention to the plight of Muslims in Kashmir, however, rang hollow given the internment of 2 million Muslim Uighurs in China’s Xinjiang region—actions that Pakistan has yet to publicly condemn.

Interestingly, the fifth permanent member of the council, Britain, seemed to align partly with China. Why? Ashok Malik, a former spokesman for India’s president, writes in the Print that the Pakistani community in Britain may have influenced London’s stance.

What’s next? Indian Prime Minister Narendra Modi and Pakistani Prime Minister Imran Khan will attend the U.N. General Assembly in New York next month and are likely to continue lobbying the Security Council and the media. But it’s unlikely any of the players will shift allegiances. On Monday, U.S. President Donald Trump spoke with Modi and Khan and described the phone calls on Twitter as a “tough situation, but good conversations!”—a departure from his controversial offer last month to mediate the crisis.

The larger question, however, is how India will deal with the Kashmir Valley in the coming weeks. If it continues its security and communications lockdown, global criticism of India will continue. (Amy Kazmin, for example, writes in the Financial Times that New Delhi’s actions show “a profound lack of empathy.”) On the other hand, restoring the internet and allowing protests could lead the Kashmiri population to finally vent its outrage, potentially leading to clashes with the military.

The internet factor. Some telephone landlines and basic cellular connections were restored over the weekend. But the broader internet shutdown remains, and that isn’t a new phenomenon in Kashmir. Largely thanks to Kashmir, India has recorded more internet shutdowns than any other country. 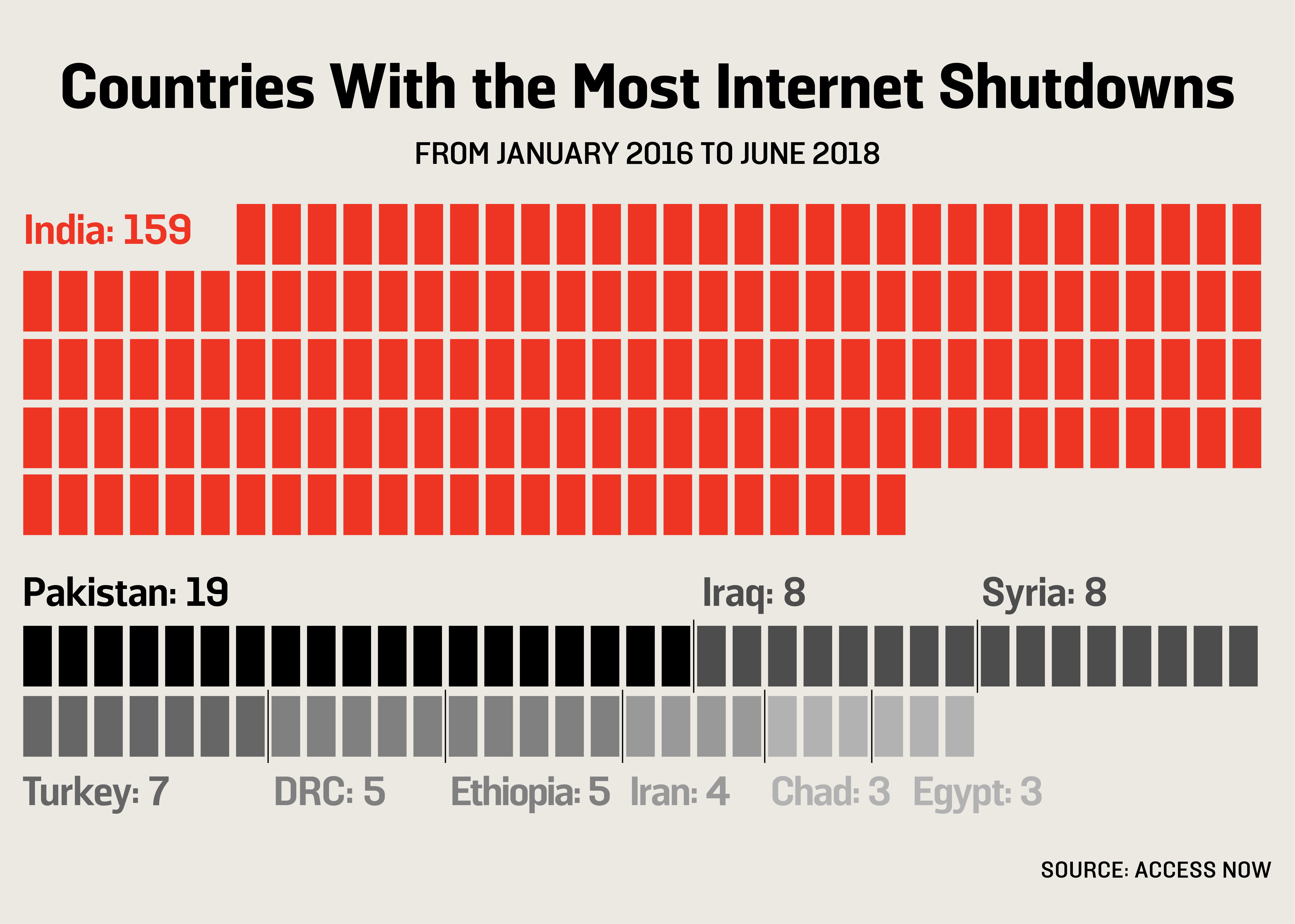 Breakdown in Afghanistan. On Saturday, a terrorist attack on a wedding hall in Kabul killed at least 63 people and injured more than 180. A local affiliate of the Islamic State claimed responsibility. The attack complicates the already messy U.S.-Taliban peace talks, the final stage of which has focused on a U.S. withdrawal from Afghanistan. Trump met with advisors on Friday to review “near-final” plans to bring home the troops, but it is unclear whether the latest attack will change those calculations.

A return to Myanmar? Late last week, Bangladesh and Myanmar agreed to a new attempt to repatriate 3,450 Rohingya Muslims who had fled ethnic cleansing in Myanmar in 2017. This follows a similar attempt last November that failed when none of those selected agreed to go, fearing ongoing violence. After a survey on Monday, U.N. officials say no refugees have agreed to return to Myanmar this time, either.

Dhaka slum in flames. Elsewhere in Bangladesh, a massive fire blazed through Dhaka’s Chalantika slum over the weekend, destroying 1,200 shacks and leaving as many as 10,000 people homeless. No deaths have been reported.

Khan’s military move. Pakistani army chief Gen. Qamar Javed Bajwa’s three-year term was set to end this fall, but Prime Minister Imran Khan this week took the unusual step of extending his tenure by another three years. The move is seen by some as a sign of Khan’s allegedly cozy relationship with the country’s military. Bajwa may also be seen as a safe pair of hands to handle the increasing tensions with India over Kashmir.

Don’t climb every mountain. This year’s climbing season on Mount Everest was one of the most dangerous in recent memory, with long lines to reach the peak, overpacked passes, and mountaineers struggling to descend with low oxygen supplies. Now Nepal’s government has proposed new rules to limit the number of climbers on Everest. Local guides say safety will come down to the rules’ enforcement.

This year, South Asia has seen major monsoon-related flooding in Bangladesh, India, Nepal, and Pakistan. Millions of people have been affected, and hundreds have died. In India alone, according to the Times of India, such flooding leads to about 2,000 deaths per year and hundreds of millions of dollars in damage.

As the rain continues to fall, pick the correct ranking of the top four South Asian nations by yearly precipitation averaged across the country:

A cash infusion for Reliance. Last week, Saudi Aramco bought a 20 percent stake in Reliance Industries’ refining and petrochemicals unit, valuing the business at $75 billion. The partnership is another move by India’s biggest company to raise cash as it seeks to cut its net debt to zero by 2021. The purchase comes after Credit Suisse downgraded Reliance shares this month over concerns that it had overspent in rolling out its cellular service Jio, which has gained 340 million subscribers with offers of free internet.

Another trade war? The Confederation of All India Traders called for a boycott of Chinese products on Sunday after China supported Pakistan at the U.N. Security Council meeting on Kashmir. The traders’ body said it was time “to make China understand the repercussions of supporting Pakistan.” (In this Economic Times essay, former Indian Foreign Secretary Kanwal Sibal writes on how New Delhi should respond to Beijing’s stance on Kashmir.)

Digital Bhutan. Cambodia’s Meal Temple Group is investing in the Bhutan start-up DrukRide to capture a relatively untapped market for online food deliveries in the country. The service will use MyDrukRide, the top ride-hailing service in mountainous Bhutan. 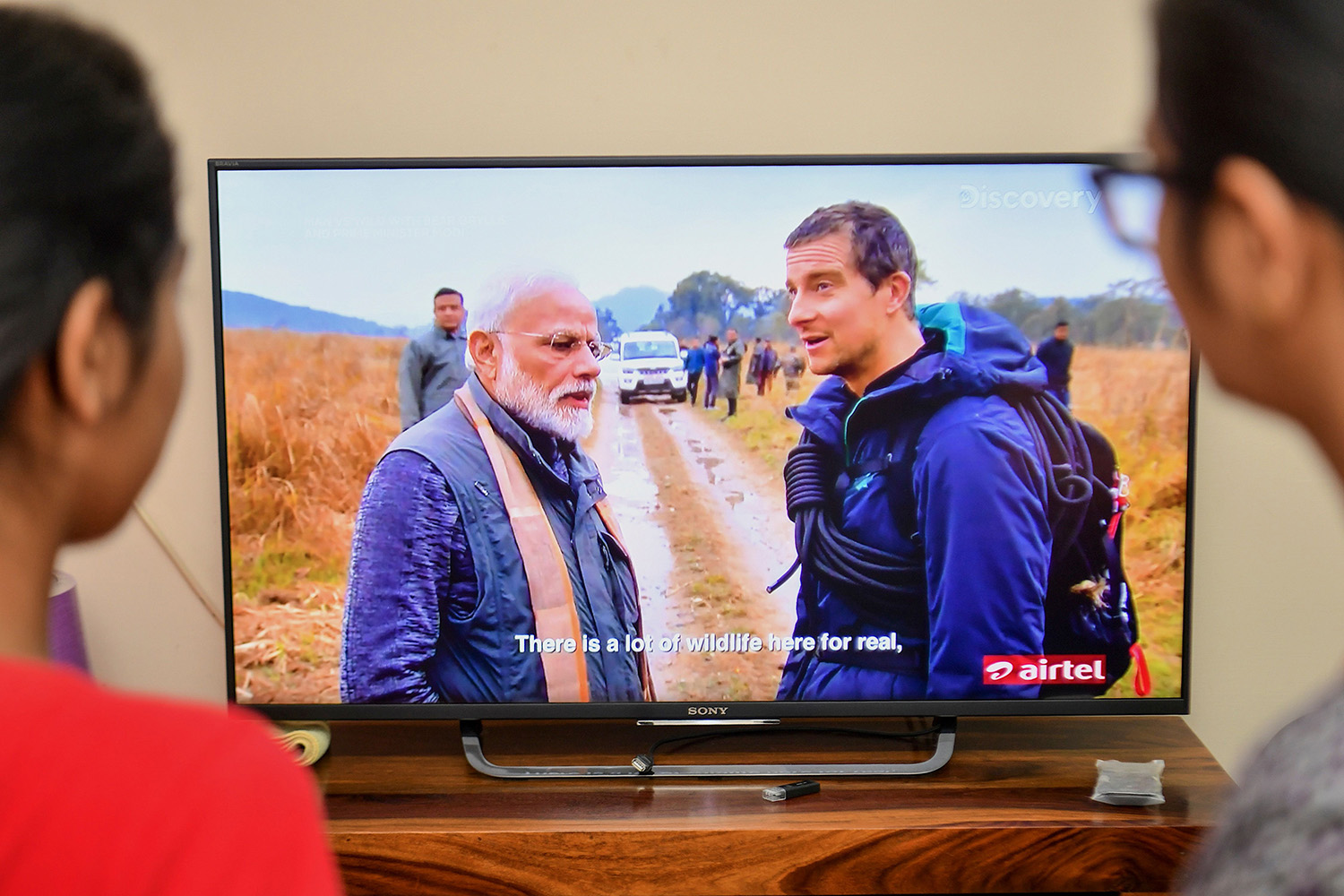 Modi vs. Wild. Indian Prime Minister Narendra Modi and British survivalist-turned-TV star Bear Grylls might seem like an odd pair, but the two recently appeared together on Grylls’s popular show Man vs. Wild. The episode—which saw the two men tramp through the rainy Corbett National Park in northern India, cross a river on a makeshift raft, and keep a lookout for crocodiles and tigers that never appeared—was panned by some as a “Putin-style propaganda exercise” and praised by others for highlighting Modi’s apparent environmentalism. You can watch it for yourself on the Discovery Channel.

Recommendation. A video by the YouTube channel Great Big Story profiles nuns from the Buddhist Drukpa Order in Nepal. In addition to typical training for meditation and prayer, they also learn kung fu as a way to focus their minds. Their skills, one nun says, show others in Nepal that girls and women are capable of anything.

At 1,083 mm per year, India ranks fifth among South Asian nations in average annual rainfall, ahead of only Pakistan (494 mm) and Afghanistan (327 mm). Bangladesh is by far the regional outlier, with 2,666 mm of rain per year. While many parts of India are very wet, the country also boasts vast stretches of arid desert.

Correction, Aug. 26, 2019: An earlier version of this article characterized the Aug. 16 U.N. Security Council meeting on Kashmir as a “formal” discussion; it was in fact technically an informal meeting, which means a closed-door discussion with no official record. It was the first session regarding Kashmir since 1971.

NEW FOR SUBSCRIBERS: Want to read more on this topic or region? Click + to receive email alerts when new stories are published on United Nations