This week: A social media ban on a network of Chinese accounts, strange ties between a dissident group and the U.S. far-right, and a corporate crackdown in Hong Kong.

Hello, and welcome to the latest edition of Foreign Policy’s China Brief. What we’ve got this week: Social media companies ban Chinese disinformation accounts, strange ties emerge between a dissident group and the U.S. far-right, and Chinese authorities launch a corporate crackdown on Hong Kong firms.

Twitter and Facebook announced this week that they had banned Chinese networks spreading disinformation on their platforms. The accounts focused in particular on discrediting the protesters in Hong Kong—for example, claiming the nurse who lost an eye after being hit by police projectile last week was actually injured by other protesters. Twitter has released the details of nearly 1,000 involved accounts and preemptively banned 200,000 more using spam filters. Facebook announced the discovery of a smaller network based on a tip from Twitter.

The move by the tech companies is a big deal, as it’s the first time a Chinese disinformation network of this scale has been identified—though many of the accounts date back years. The tactics have been likened to Russian disinformation operations. While China refused to directly respond to the ban, some Chinese users have called it censorship. That’s a hard claim to defend: Most of the accounts deliberately concealed their purpose.

Giveaway clues. It’s not yet clear how Twitter put together the list of accounts, and there’s been at least one likely case of a false accusation. One clue may have been the time that the accounts were posting, which a mainland-based data sleuth identified as peaking during work hours in Beijing. (The accounts claimed to be spread all over the world.) The drop-off from noon to around 2 p.m. is noteworthy: It coincides with the long lunch break of Chinese official institutions that U.S. agencies have used to identify Chinese military hackers in the past.

Big tech’s next move. Twitter has taken the opportunity to ban advertising from state-controlled media on its platform, after growing criticism. That policy can be tricky to define, especially if it includes propaganda outlets such as China’s CGTN or Russia’s RT but excludes independent media with state funding such as the BBC. Facebook, which has far more Chinese advertising than Twitter despite also being banned in the country, has not announced any such move. Nor have Google and YouTube, despite a growing propaganda presence.

A medley of fake accounts. It appears that some of the Chinese disinformation accounts were purchased from other users, particularly in Russia. The accounts seem to have built up followings by appealing to very specific niches, such as QAnon conspiracy theorists, supporters of U.S. President Donald Trump, or bitcoin fans. In addition to the Hong Kong protesters, many of the accounts previously targeted the self-exiled Chinese billionaire Guo Wengui with criticism. They have also posted in various languages. 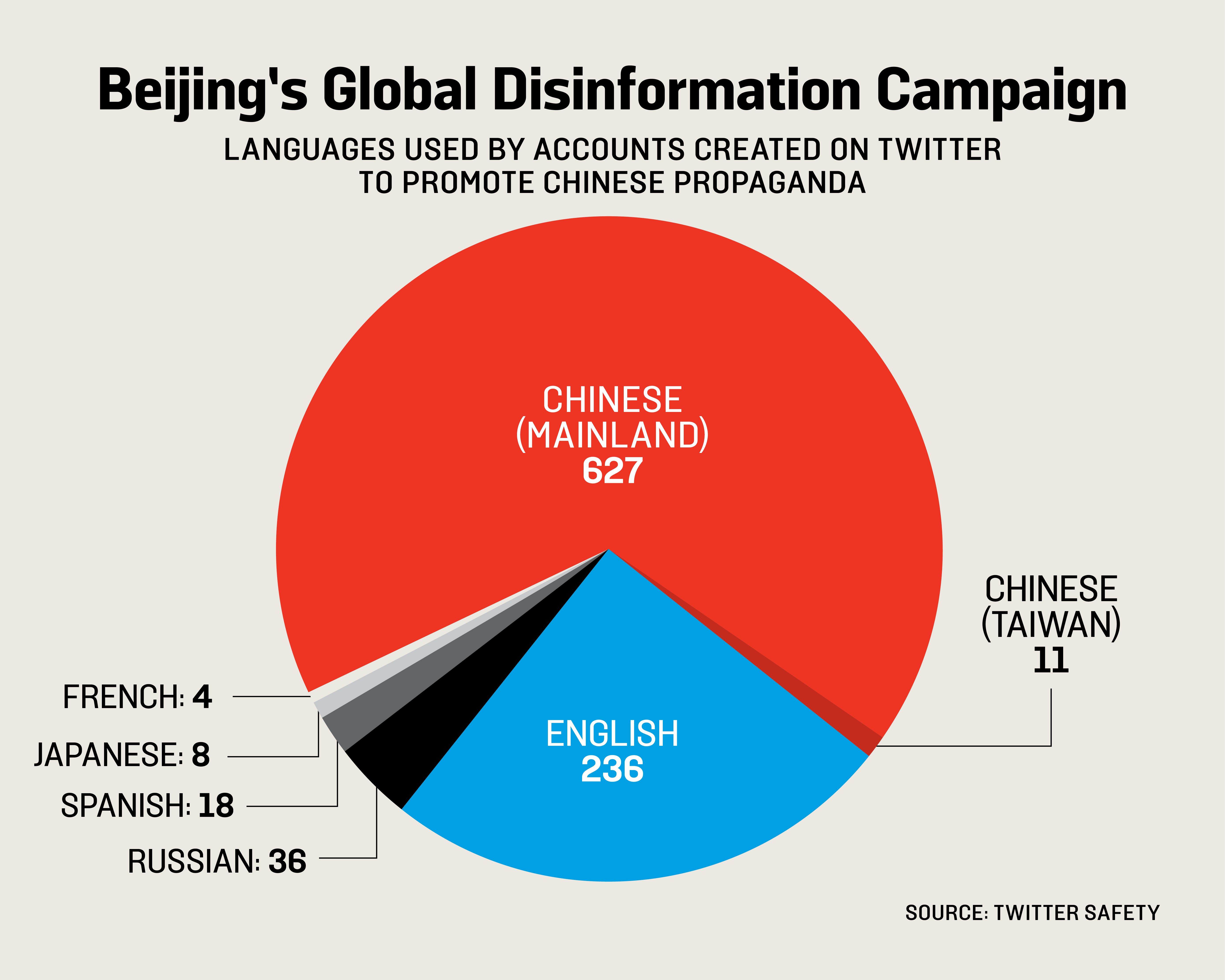 The cult of Trump. The Chinese state isn’t the only dubious social media actor. It was revealed this week that the Epoch Times, associated with the Falun Gong spiritual community, is now the largest buyer of pro-Trump Facebook advertising. In the last six months, the English-language outlet has spent $1.5 million on 11,000 video ads. In addition to promoting far-right policies and conspiracy theories in the United States, the Epoch Times is closely allied with extremist political parties in Germany.

Falun Gong is a religious movement that has been the target of a particularly far-reaching Chinese government crackdown. It is also known among China analysts for promoting extreme and unsupported claims. (Its founder, Li Hongzhi, espouses crank theories and has claimed to have magical powers.)

Hong Kong keeps marching. According to organizers, 1.7 million people turned out for yet another massive pro-democracy march in Hong Kong this weekend, despite a police ban on the rally. The march was entirely peaceful, in part due to the police keeping their distance. That could put more pressure on the besieged Hong Kong Chief Executive Carrie Lam. As protests continue, Beijing’s line—that the protestors are terrorists and separatists—seems unlikely to change.

Border paranoia. It has become routine for Chinese authorities to check phones and computers for signs of support for the Hong Kong protesters at the border with the mainland. One possible victim of this policy is Simon Cheng, a British consulate employee held by the Shenzhen police for over 10 days. (China admitted today that it had detained him but offered no comment on the rationale.) As the legal expert Jerome Cohen points out, if Cheng is released soon it could be a relatively minor matter, but there are fears he could be accused of espionage—leaving him in the same boat as former Canadian diplomat Michael Kovrig, held by China since Dec. 10, 2018.

U.S.-China tensions. Trump has continued making aggressive comments over the U.S.-China trade war this week, saying that the dispute was necessary even if it hurt the U.S. economy. “Somebody had to take China on,” he said during a press conference. Meanwhile, the United States has formally approved a fighter jet sale to Taiwan in a move already vigorously denounced by China. (It’s the first such deal signed with Taiwan since 1992.)

Cathay slapped down. Hong Kong airline Cathay Pacific’s CEO stepped down this week after some of its staff were reportedly involved in the democracy movement. It is rumored that the resignation came because he refused to hand over the employees’ names to the Chinese authorities, though reports are unconfirmed. The turmoil at Cathay Pacific comes amid reported threats against the Big Four accounting firms in Hong Kong for not sufficiently supporting Beijing.

And Alibaba steps out. In a move closely watched by investors, the Chinese logistics giant Alibaba has postponed a $15 billion listing in Hong Kong as unrest in the city continues. The decision could be because of the city’s growing instability—or it may also have been driven by fears that the Chinese Communist Party would look sternly on the deal, which Reuters reports could have been the largest equity deal this year.

China’s GPS. The Chinese satellite positioning system BeiDou now has more satellites in orbit than its U.S. competitor, GPS—even though its use remains largely limited to Chinese firms. That has raised security concerns: Unlike GPS, BeiDou is a two-way communication system, allowing it to identify the locations of receivers. The U.S. national security community is worried that it could be used in cyberattacks.

Plane problems. The Craic CR-929, a passenger jet developed jointly by China and Russia and intended to challenge the Boeing-Airbus duopoly, looks like it won’t meet its 2025 delivery date. The delay reflects disagreements between Chinese and Russian state firms—as well as possible miscommunication. The market for a Chinese plane is more than secure: China is projected to overtake the United States as the largest air travel market within three years.

This 1957 book is, like the region it describes, a forgotten gem. Goullart was a Russian white emigre forced into exile in his youth and a brilliant eccentric. Forgotten Kingdom describes his eight years running micro-finance programs in Lijiang, with Tibetan princesses, local gossips, and drunken barfights. Full of affection and humor, it’s a rich portrait of pre-Communist China. The book ends with the CCP attempting to stamp all this out. It’s hard to find in print, though there is a relatively recent reprint edition.

China’s disinformation campaigns abroad are an extension of techniques long used to control the internet within its borders. While outright censorship online is a common tactic, the Chinese Communist Party also employs tens of thousands of people to post covert pro-government propaganda. These pro-government posters are derogatorily termed wumao (literally “50-centers”), or known as part of the “50-cent party”—a reference to how much they were supposedly paid per post. The term has shifted meaning somewhat in recent years and is now used to denigrate anyone who seems too enthusiastic in their support of the party. The implication is still that they’re being paid off in some way, rather than expressing genuine views.

If you enjoyed this in your inbox, you can subscribe to our other newsletters here. Send any tips, comments, questions, or typos to newsletters@foreignpolicy.com.