Residents of the restive area of Pulwama are under lockdown for a third week. But they want the world to know they’re going to fight back.

PULWAMA, Jammu and Kashmir—In February, a suicide bomber blew up an Army convoy in the Kashmiri city of Pulwama, killing more than 40 military personnel. The attack—which India alleges was orchestrated by militants from across the border in Pakistan—brought the two nuclear-armed countries to the brink of war. But while tensions receded in the following months, they were ratcheted up once again on Aug. 5, when New Delhi unilaterally announced the revocation of certain autonomies in Indian-administered Jammu and Kashmir—a move Islamabad warns could be the start of ethnic cleansing in the disputed Muslim-majority region.

On Aug. 16, the United Nations Security Council discussed Kashmir for the first time in decades. But while the fate of the region has been the topic of debate in Washington, London, Moscow, Beijing, and Paris—the capital cities of the five permanent members of the Security Council—Kashmiri voices have largely been silenced since Aug. 5, with a security clampdown and a near-total communication shutdown in effect. The few video reports from the region, such as the BBC’s footage of thousands of demonstrators in Srinagar being attacked by police tear gas, have been dismissed by New Delhi as “fabricated.”

In addition to shutting down communications, New Delhi has orchestrated mass detentions of mainstream and separatist politicians, civil society members, lawyers, and businesspeople to keep a lid on information flowing in and out of the Kashmir Valley. But the Indian government has repeatedly said there is no law and order crisis in the state. I traveled to the troubled region of Pulwama to explore the situation on the ground. 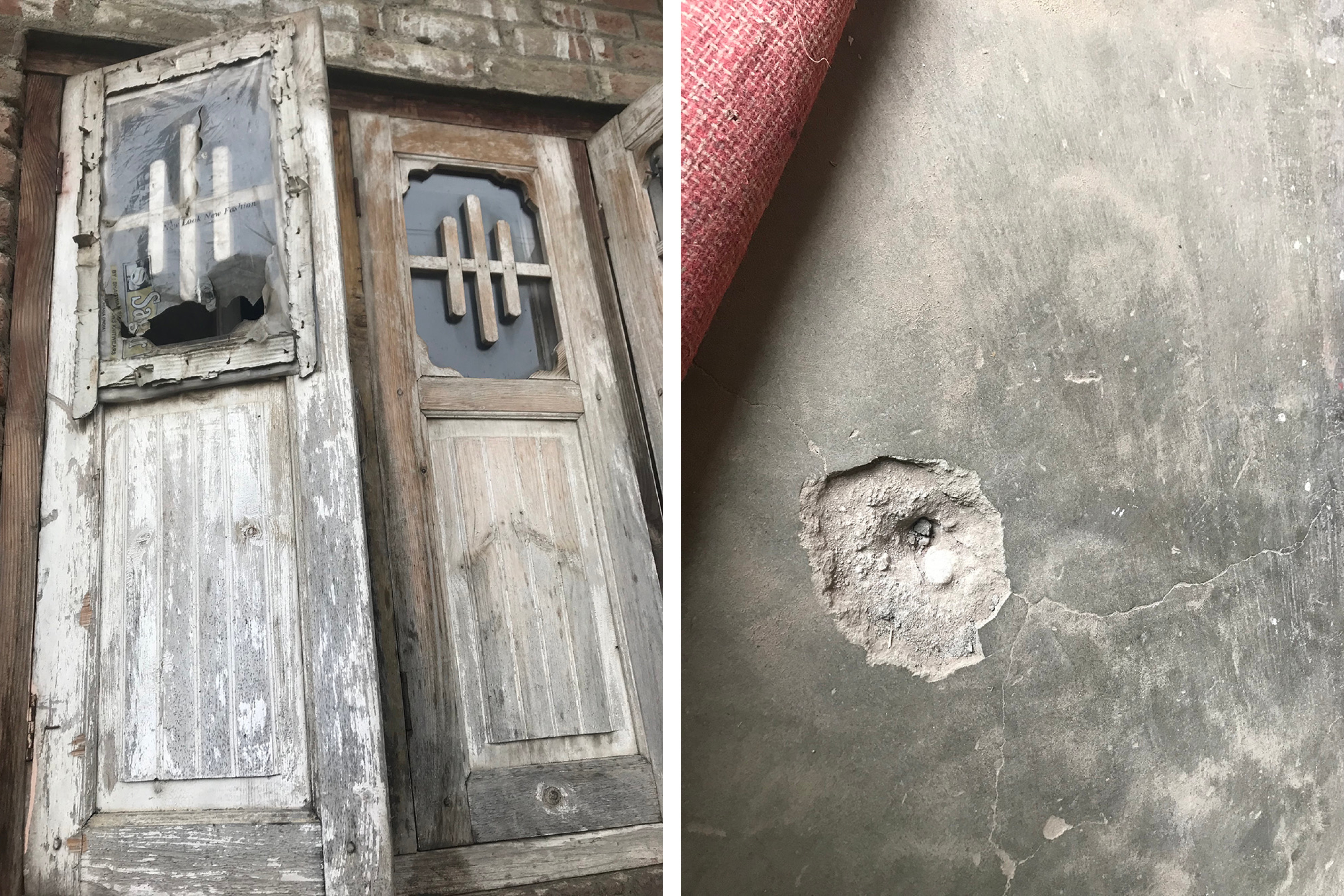 Left: Residents say the army broke windows in Parigam during the crackdown in Pulwama. Right: Bullet holes on the floor in Seher’s Karimabad house on Aug. 14. Soumya Shankar for Foreign Policy

The mainstay of Pulwama’s economy is its sprawling apple orchards, visibly spread around its arterial highway as far as the eye can see. August is prime season for working in the orchards, and even the government-imposed curfew cannot keep the residents of Pulwama off their fields. As I rode into the heavily militarized city on Aug. 14, a day before India’s Independence Day, it took a while before I could find locals willing to talk to a reporter. Amid the roars of a massive surveillance jet hovering above, behind an abandoned lane, two 20-year-old men told me how their friend, Mudasir Hamid Dar, had been picked up by the police in a midnight raid a week earlier. The two men were told by the police that they would meet the same fate if they didn’t keep shut. Dar is a medical student who was preparing for the NEET examinations, India’s centralized and highly competitive entrance test to its elite medical schools.

“I fear for my life, but when it comes to your own people, one is forced to risk everything,” said one of Dar’s friends. He said that a majority of young men from this area had been detained by the police at least once in the last two years, as they would throw stones at Army forces in dissent of the long-running security clampdown in the area.

“Once innocent boys are picked up and tortured on baseless suspicions, they join the militancy in reaction. Then they’re declared terrorists by the state and gunned down,” said one of the young Kashmiris.

“The abrogation of Article 370,” said the other friend, referring to New Delhi’s revocation of the constitutional clause giving Kashmir a degree of autonomy, “is gunda raj”—the reign of thugs. “These days they are arresting whoever they want, whenever they want,” added the friend, who is training to be a mechanical engineer. “Slowly, they will kill all the boys in Kashmir. They want to kill us and take our land.”

Critics argue that Prime Minister Narendra Modi’s decision to unilaterally alter Kashmir’s special status—a key campaign issue for his Hindu nationalist Bharatiya Janata Party—amounts to a demotion in the state’s importance, bringing it directly under New Delhi’s control. Non-Kashmiri Indians can now buy land in the state, leading to inevitable fears that Hindus could attempt to settle in the area and change the demography of the Muslim-majority state.

A couple miles away from the main town on the main highway lies the Pulwama jail, where most of the young detainees are being held. On any given morning since Aug. 5, a crowd of parents can be seen inquiring about their missing sons.

A few meters away, a group of local men open up. Life has been difficult under the curfew, they said. “The Indian media tells us all is calm, without even asking us how we feel,” said Mir Wasim, 40, who runs a business and a school in the area.

The consensus in this Pulwama neighborhood is that New Delhi’s move has alienated Kashmiris who felt a fealty to India—as opposed to those who wanted freedom from it.

“A militant who has already picked up the gun couldn’t care less about this change of status,” Wasim said. “You could unfurl the flag of India, Pakistan, the United States, or even Afghanistan, it doesn’t matter to him, because he wants nothing less than freedom. The only people who care about the abrogation of Article 370 are those who actually believed in the Indian Constitution—those who believed they were a part of India.”

Wasim’s opinion corroborated what I heard from several others across the restive valley. By unilaterally revoking Article 370, India had pushed to the brink even those who were moderately inclined toward New Delhi in the discourse of Kashmiri statehood and identity.

Unlike the capital Srinagar, which has been rocked by multiple mass protests since Aug. 5, there have been no mass demonstrations in this part of Kashmir. Locals say the fear of raids and detentions has kept the volatile area from erupting. The question is how long Kashmiri anger can be contained. “[As long as] there are constraints, there will be no protests in Pulwama,” Wasim said. “It’s like a bottle of soda: You’ve tightened the cap and shaken the bottle.” In other words, once the constraints were loosened, there could be an eruption. 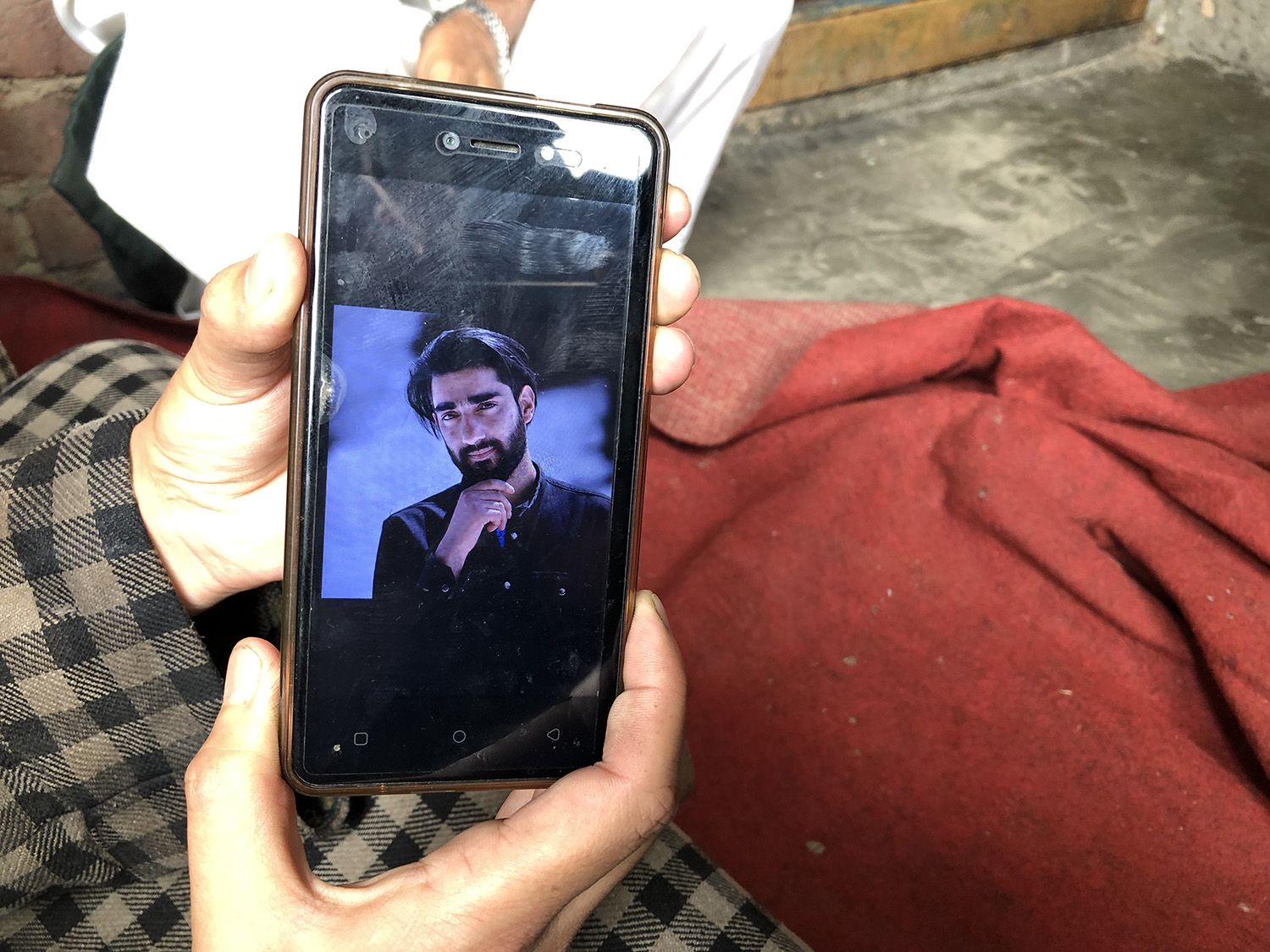 Family members display a picture of Seher, who was detained in the crackdown in Pulwama on Aug. 14. Soumya Shankar for Foreign Policy

Karimabad is a small hamlet in Pulwama known for being among the most rebellious villages in Kashmir. Separatist sentiment has always been strong in this area. According to the 2011 state census, Karimabad has just 3,565 residents.

The village cemetery—known locally as “the martyrs’ graveyard”—holds the coffins of men who died in the fight for Kashmiri independence. It is revered as if it were a holy site. Just a few meters away is a brick and mortar settlement with narrow, winding lanes. Here, on Aug. 8 at 3:15 a.m., 26-year-old Nilofer and her mother, Rubina, were woken by the footsteps of security forces who scaled the walls of their two-story home and picked up Seher, Nilofer’s 19-year-old brother. We’re keeping their surnames secret to protect their identities.

“When they reached our veranda, they banged on our doors, intimidated us, and asked my mother where Seher was,” said Nilofer. Her brother lay asleep inside, she said. Hearing the commotion, he leaped out of bed in fear. The guards then caught him by his hair and dragged him out of the house.

“I kept telling them, my brother is innocent, he has never held a gun,” Nilofer said. When the forces left, they fired two shots, she said, removing a red rug from the veranda floor to show me the bullet marks. Several other local young men were also picked up from Karimabad that night in a bid to preempt potential protests.

Seher worked in the village as a welder. But Nilofer sees no future for young men and women in Karimabad. “Modi has killed our future,” she said. “We fear for our lives and safety every day. Does Modi actually believe he can rule over Kashmiris? We will never let this happen. We will keep fighting. [Just as] our brothers have achieved martyrdom, the girls of Kashmir will give our lives too.”

The Associated Press has reported at least 2,300 people, mostly young men, have been detained in the Kashmir Valley during the ongoing crisis. Kavitha Krishnan, a political activist from New Delhi and member of a fact-finding team assessing the situation in Kashmir confirmed mass arrests across the state. “We have no idea of the numbers, because most detainees are not being kept in official detention—they’re simply being held in Army camps and police stations,” Krishnan said. And because of the region’s history, Kashmiris have a strong collective memory of young men being picked up and never returning home—a fear that has now been reignited across the valley.

Pulwama’s deputy superintendent of police, Farooq Ahmad, said his teams were following protocol: “The situation is completely peaceful. No incident of violence has been reported. … We are apprehending people as usual—there is nothing special in this. We used to arrest people on charges of stone pelting in the past too. This is quite normal.” 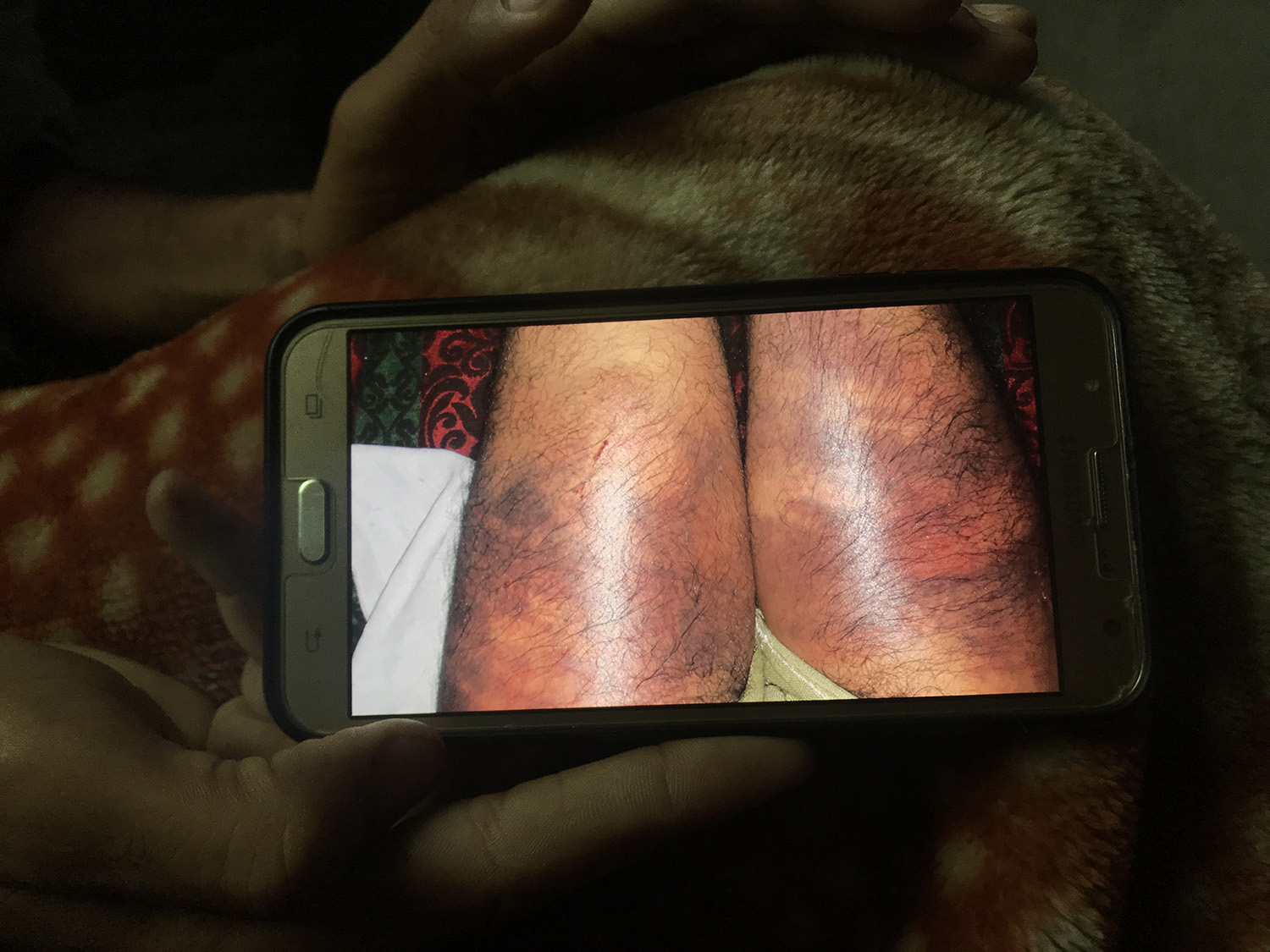 Residents of Parigam show bruises on Aug. 14 that they say were inflicted by army beatings during the crackdown. Soumya Shankar for Foreign Policy

A few miles away, the neighborhood of Parigam is nestled between the Srinagar and the plains of southern Kashmir. Unlike Karimabad, Parigam has remained largely peaceful in the past 10 years. Militants are rarely seen in these parts.

But on Aug. 6, just a day after Kashmir’s autonomy was revoked, security forces set upon the neighborhood. Parigam residents say officers dragged young men out of their homes, warning their families to stay inside. “The Army forced us to chant ‘Jai Hind’ and ‘Vande Mataram,’” said one resident, referring to two Hindu nationalistic slogans. “When one of the men recited the ‘Islami kalma’ instead, they made him lick the dirt off the road.”

Among the alleged instruments of torture used that night were cables, rods, and plumbing pipes. One young carpenter I spoke to was unable to walk without crutches. Torture marks showed across his back and legs. But the forces said: “We didn’t beat you, did we?” The villagers nodded in unison, “No sir, you didn’t.”

This story was produced as part of a reporting fellowship with The GroundTruthProject, with support from the MacArthur Foundation and Henry Luce Foundation.