Greenland Is the Center of the World

The Arctic island offers a harrowing reminder of the environmental damage, and political dangers, already imposed by climate change.

NUUK, Greenland—U.S. President Donald Trump’s open interest in purchasing Greenland was almost universally acknowledged as undiplomatic and “absurd,” to cite Danish Prime Minister Mette Frederiksen. But the kerfuffle has brought long overdue attention to the Arctic island that’s roughly half size of Western Europe (more than 836,000 square miles), 80 percent covered in a layer of ice that is up to 2 miles thick, and enveloped in frigid darkness for about six months every year.

Although Greenland is unassuming, it has quietly moved ever closer to the center of geopolitics. Trump probably didn’t know or particularly care about the island’s status as a leading indicator and object of climate change. But the American people should pay close attention. It’s not enough to merely laugh at Trump’s audacity. His advisors were likely aware of China’s and Russia’s growing assertiveness in the region and the way its shipping lanes and mineral deposits are becoming more accessible through global warming. The melting of the Arctic is being treated by many countries as an opportunity—and by the region’s indigenous peoples as an existential risk.

A journey I made this summer across Greenland was a harrowing reminder of the widespread environmental damage, and political danger, already imposed by climate change. Glaciers I visited just five years ago have visibly further retreated, with temperatures rising to California levels and new forms of plant life growing where once only ice and rock had existed. Today, Greenland is melting six times faster than it was in the 1980s. Between 1972 and 2018, scientists estimate, Greenland’s ice sheet lost 11 quadrillion pounds of water. 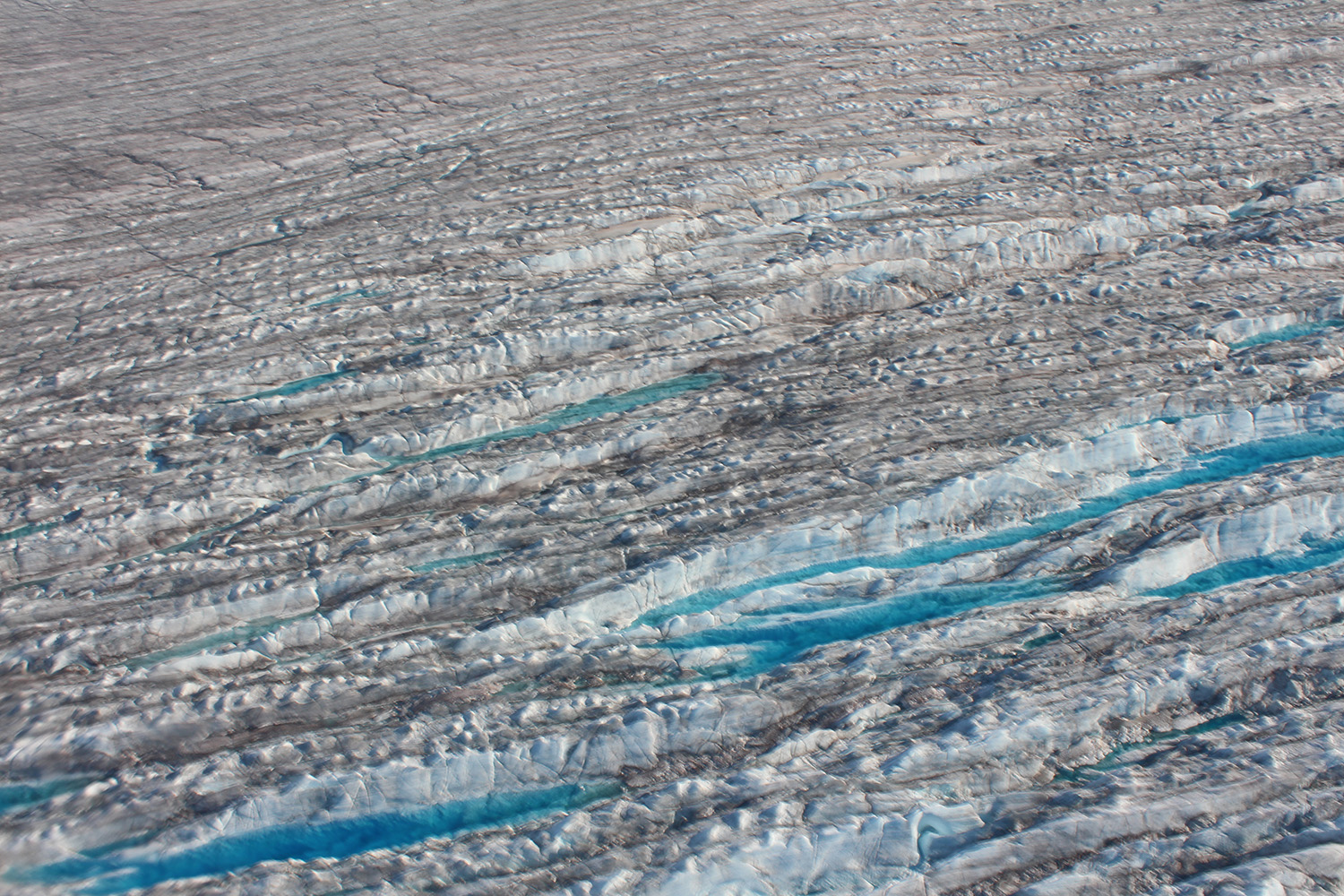 The Greenland ice sheet in August. The massive ice sheet that covers 80 percent of Greenland is melting, with rivers and lakes crisscrossing its surface. (Laurie Garrett for Foreign Policy)

For the first time, I saw spruce and birch trees—normally found only as far north as Norway— growing near the Russell Glacier and rivers of water flowing across the surface of Greenland’s ice sheet. 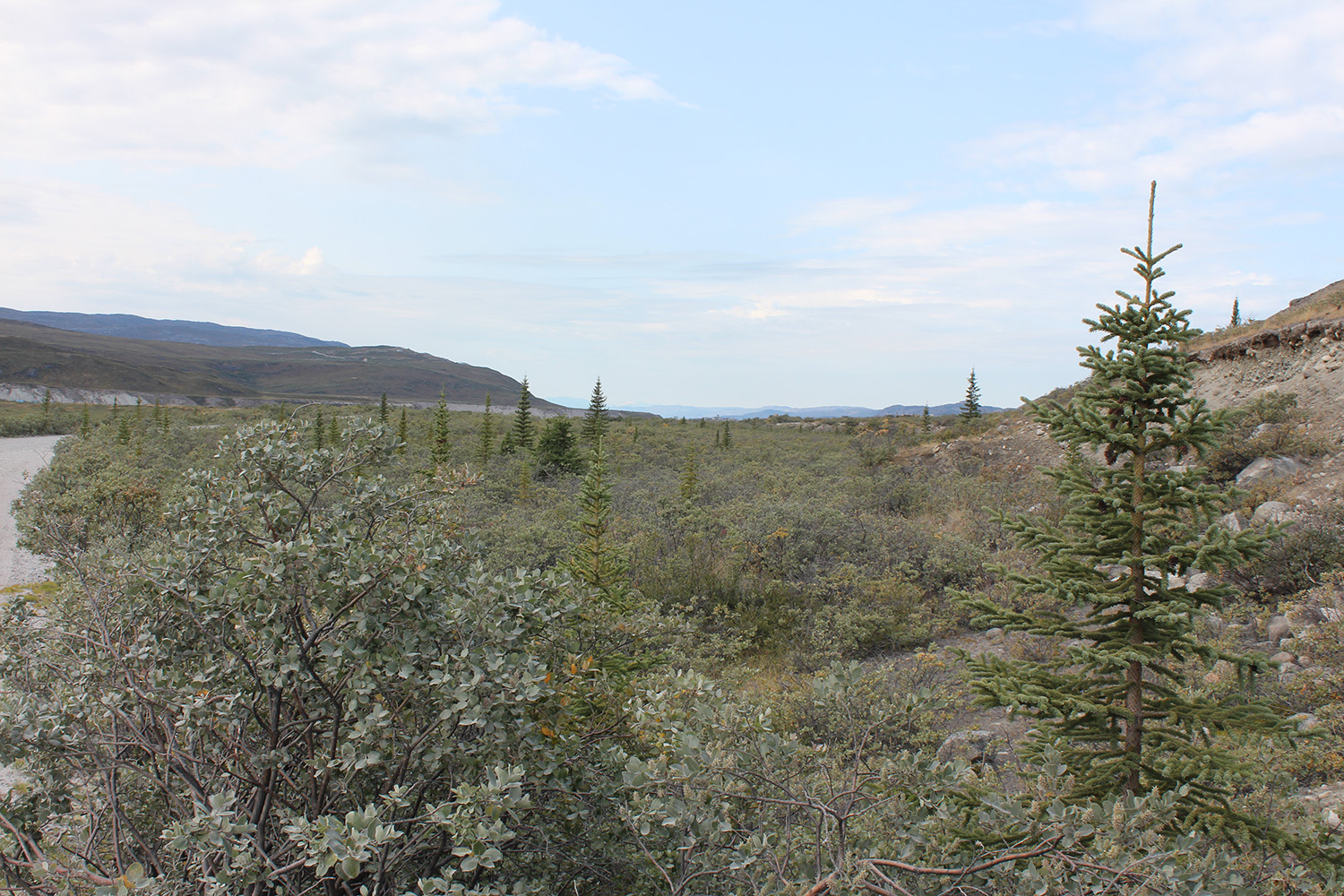 Spruce trees near the Russell Glacier in southwestern Greenland in August. Until very recently, the climate was prohibitively frigid for such trees to grow there. (Laurie Garrett for Foreign Policy) 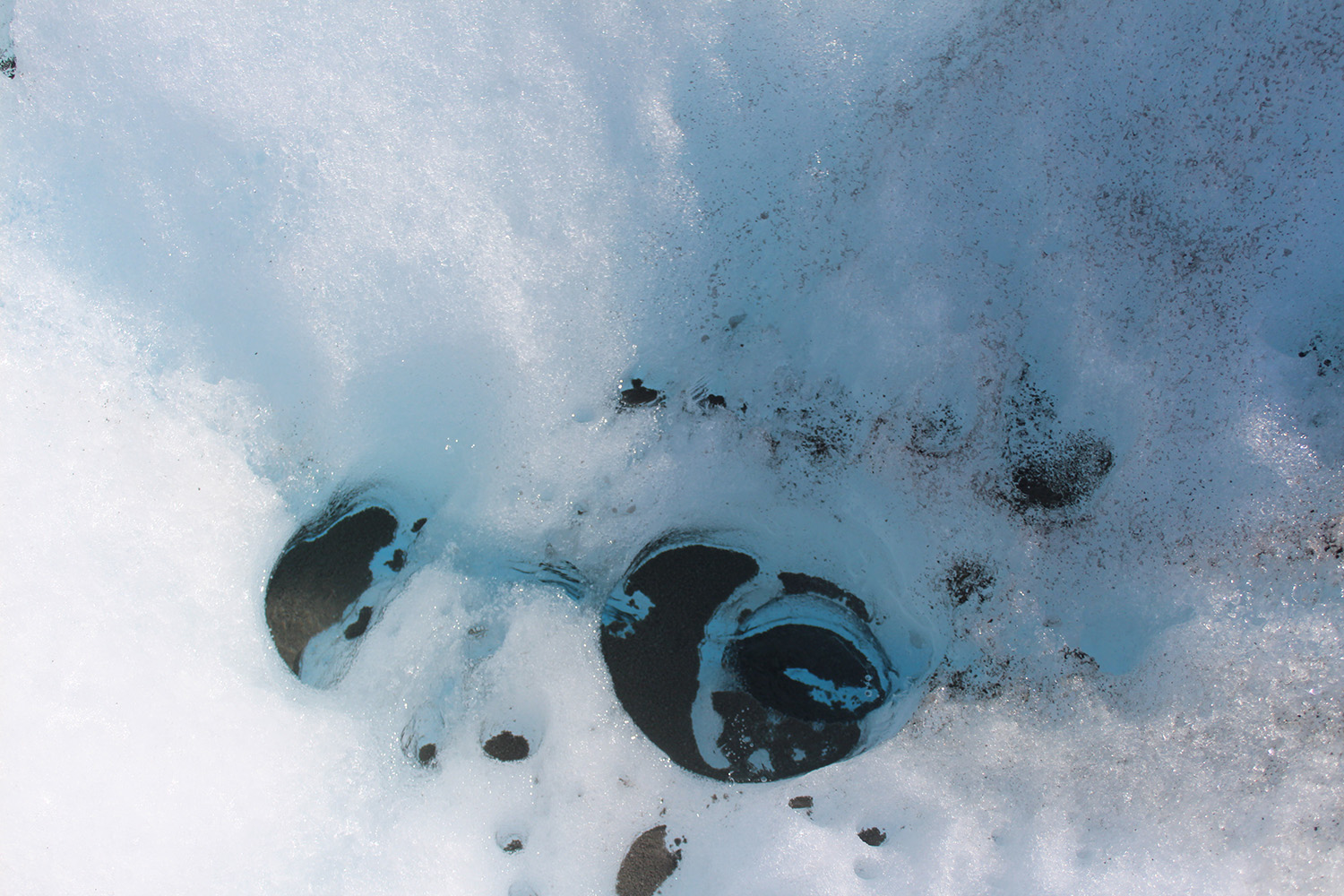 Cryoconite holes were so numerous across the sheet that some sections looked like Swiss cheese. The cryoconite holes form when something black settles on the white ice surface—soot blown from faraway polluters, colonies of microscopic organisms, microplastics, or bits of stone ground up from the melting surface—reversing the albedo effect. Usually the white ice reflects sunlight so blindingly that it is intolerable to spend time on the sheet without wearing polarized sunglasses. But black surfaces attract sunlight, allowing solar radiation to drill deeply down, fracturing the surface and speeding overall melt. The combination of reverse albedo effects and abnormally hot weather spells doom not only for Arctic ice from Nome, Alaska, to Norilsk, Russia, but also for our oceans. The melted, unsalted water must go somewhere. Its destination is the seas, raising sea levels and lowering the overall salinity of the waters, imperiling millions of life forms that cannot tolerate the rising acidity.

I was in Greenland’s southwestern town of Kangerlussuaq when temperatures soared over 73 degrees Fahrenheit and torrents of melting ice roared from the ice sheet into the fjord, eventually reaching the open sea. In 2012, the tiny town’s bridge was washed out by raging melt waters. It has since been replaced by a stronger concrete-and-steel structure from which I filmed the following massive flow of melt water:

This is a roaring glacial melt, under the bridge to Kangerlussiauq, Greenland where it's 22C today and Danish officials say 12 billions tons of ice melted in 24 hours, yesterday. pic.twitter.com/Rl2odG4xWj

But it wasn’t the huge amount of water that was most significant here—it was the fact that this marked an unprecedented second melt in a single year. Greenland had already experienced a record-breaking ice melt in late May and early June. In a few weeks, Danish researchers and NASA scientists will calculate the total 2019 ice loss, comparing it to 2012 to decide whether this year has set an ominous new record. Between July 31 and Aug. 3, I bore witness as an estimated 58 billion tons of ice melted off Greenland’s central sheet and hundreds of glaciers—40 billion more than is average for this time of year. On July 26, the nightmare that would soon reach Kangerlussuaq hit the Arctic Swedish outpost of Markusvinsa, where, according to the U.S. National Oceanic and Atmospheric Administration, the temperature topped 94 degrees Fahrenheit.

Meanwhile, in the winter, when darkness makes flyover and satellite studies impossible, temperatures across the Arctic are rising even more rapidly above normal. About 600 miles from the North Pole in Longyearbyen, Svalbard—a Norwegian archipelago in the Arctic Ocean—Kim Holmen, the international director of the Norwegian Polar Institute (NPI), told me that average winter temperatures there have risen 18 degrees Fahrenheit since 1989. And that means less snow falls in the winter, rains are more common, and the shift results in radical change in the texture and stability of the ice itself. Svalbard may be the fastest-heating place on Earth, but the same trends are seen across the entire Arctic. 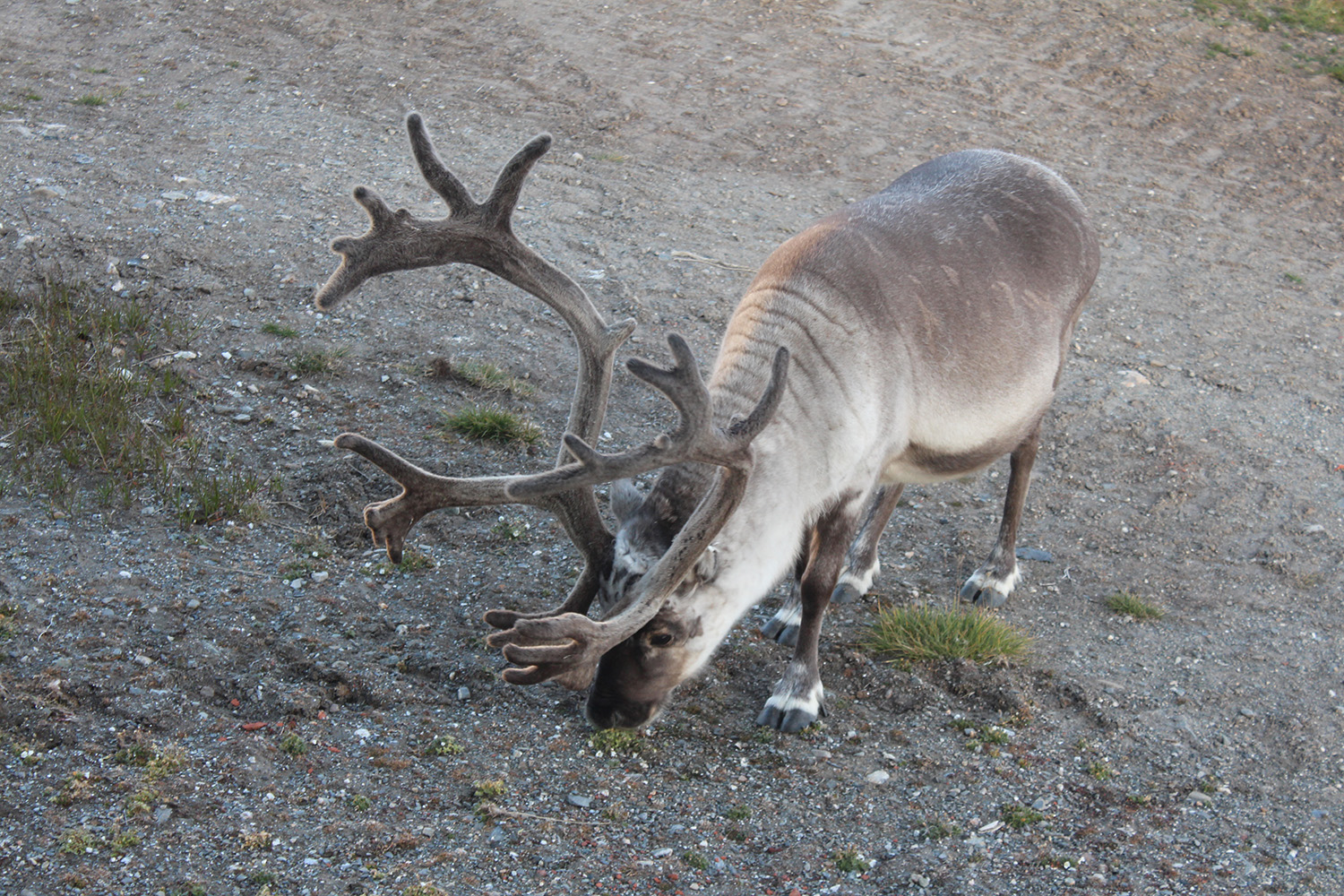 A reindeer fattens up before winter arrives in Svalbard, a Norwegian archipelago in the Arctic Ocean, in August. (Laurie Garrett for Foreign Policy)

Lack of normal ice and snow means a loss of terrestrial mobility in places like Greenland’s west coast, where native Inuit have, for centuries, made their way from village to village via dog sleds and kayaks. In the long, dark months of winter, boat travel is impossible and air travel is often overly dangerous for commercial airlines, so dog sleds remain the primary form of travel. As winter temperatures rise and snowfall is increasingly interrupted by rain, the snowpack hardens and gets glassy, rendering it too slick for safe travel. The hardened surface ice is also killing grazing animals, such as musk ox and reindeer, as they cannot punch through it to get to lichen and plants that cling to rocks beneath the snow. Shortly before I arrived in Longyearbyen, Svalbard’s largest town with a population of 2,200, NPI researchers found 200 dead reindeer on the island, all victims of such starvation.

As detailed in this month’s issue of Scientific American in a series of articles and powerful graphics, countries are now hovering like vultures over the melting Arctic, staking claims to vast swaths of once frozen seas. Trump’s efforts may have been the crassest attempted land grab to date, but China, Russia, Canada, Denmark, Sweden, and Norway have all staked enormous claims around the North Pole region.

Greenland’s tiny capital of Nuuk, inhabited by about 18,000 people, is expected to more than double in size over the next nine years. A building boom is underway, construction cranes dot the landscape, and two international airports servicing Nuuk and another western town are in development. This will make the expensive, arduous journeys to and around Greenland far more accessible, vastly increasing tourism and interest from developers, according to Nuuk Mayor Asii Chemnitz Narup. Everywhere I looked in Nuuk I saw signs of prosperity that were absent when I visited in 2014, including a crowded shopping mall, upgrades to housing, and well-paved roads bathed in LED lights.

Most of the investors are European—but China now wants a piece of the Arctic action. When I was last in Greenland in 2014, I saw no Chinese visitors or tourists, but this summer they rivaled the Europeans in numbers. By comparison, few Americans venture privately to Greenland, beyond the scientific teams working on the Greenland ice sheet, logging the grim details of its accelerating melt.

Nevertheless, Aqqaluk Lynge, a longtime native Inuit political leader, acknowledged that Greenlanders “are very much dependent of U.S. defense,” including the large Thule Air Base operated by U.S. military since 1943. Originally a radar outpost used to monitor Soviet activity, Thule was a vital position throughout the Cold War. But “it’s very problematic now, when we see what kind of country you are developing into,” Lynge told me over lunch in Nuuk. “I’m very nervous about dealing with Trump.” The Inuit of Greenland are also well aware of how their brethren in Alaska fared after the 1867 U.S. purchase of that territory from Russia.

“We’re better off with the Danes,” Lynge said. He described studies that show how dependent the population is on Danish subsidies and social welfare programs—the loss of which, he said, would require 10 enormous iron-mining operations running year-round. There aren’t enough Greenlanders to staff such a scale of mining, even if the populace supported inflicting large-scale environmental damage to extract the ore from solid stone. But Chinese investors, courting pro-independence activists, have let it be known that they would be happy to conduct the mining on behalf of an independent Greenland. Lynge remains skeptical of any would-be partners. “It’s a humanitarian question, how long we can survive,” he said. “Can Greenland be an independent nation-state? No. I don’t think the world is ready for us.”

Even absent independence, Lynge fears that his small, highly scattered Inuit population will eventually be overwhelmed by foreigners enticed by the country’s warming climate. “Then, we will have to deal with being a minority in our own country,” he said, shaking his head. “That would be the end of us.”

Laurie Garrett is a former senior fellow for global health at the Council on Foreign Relations and a Pulitzer Prize winning science writer.

Here’s How Trump Should Have Approached Greenland

The United States can build on its strategic toehold without buying the entire country.

Trump’s Spat With Denmark Could Cost Him Against Iran

The Danes may have been considering joining the United States’ maritime security force—until the U.S. president exploded over Greenland.

Coronavirus and the End of Economics

The Shocking “Coronavirus Coup” in Hungary Was a Wake-Up Call

Coronavirus and the Dawn of Post-Democratic Europe

The Shocking “Coronavirus Coup” in Hungary Was a Wake-Up Call