Plus: Developments in the Afghan peace deal, a vote on Italy’s new government, and what to watch in the world this week.

Here is today’s Foreign Policy brief: Britain’s Parliament meets as Boris Johnson threatens snap elections, the Afghanistan peace deal is on Mike Pompeo’s agenda in Brussels, and what to watch in the world this week.

Here is today’s Foreign Policy brief: Britain’s Parliament meets as Boris Johnson threatens snap elections, the Afghanistan peace deal is on Mike Pompeo’s agenda in Brussels, and what to watch in the world this week. 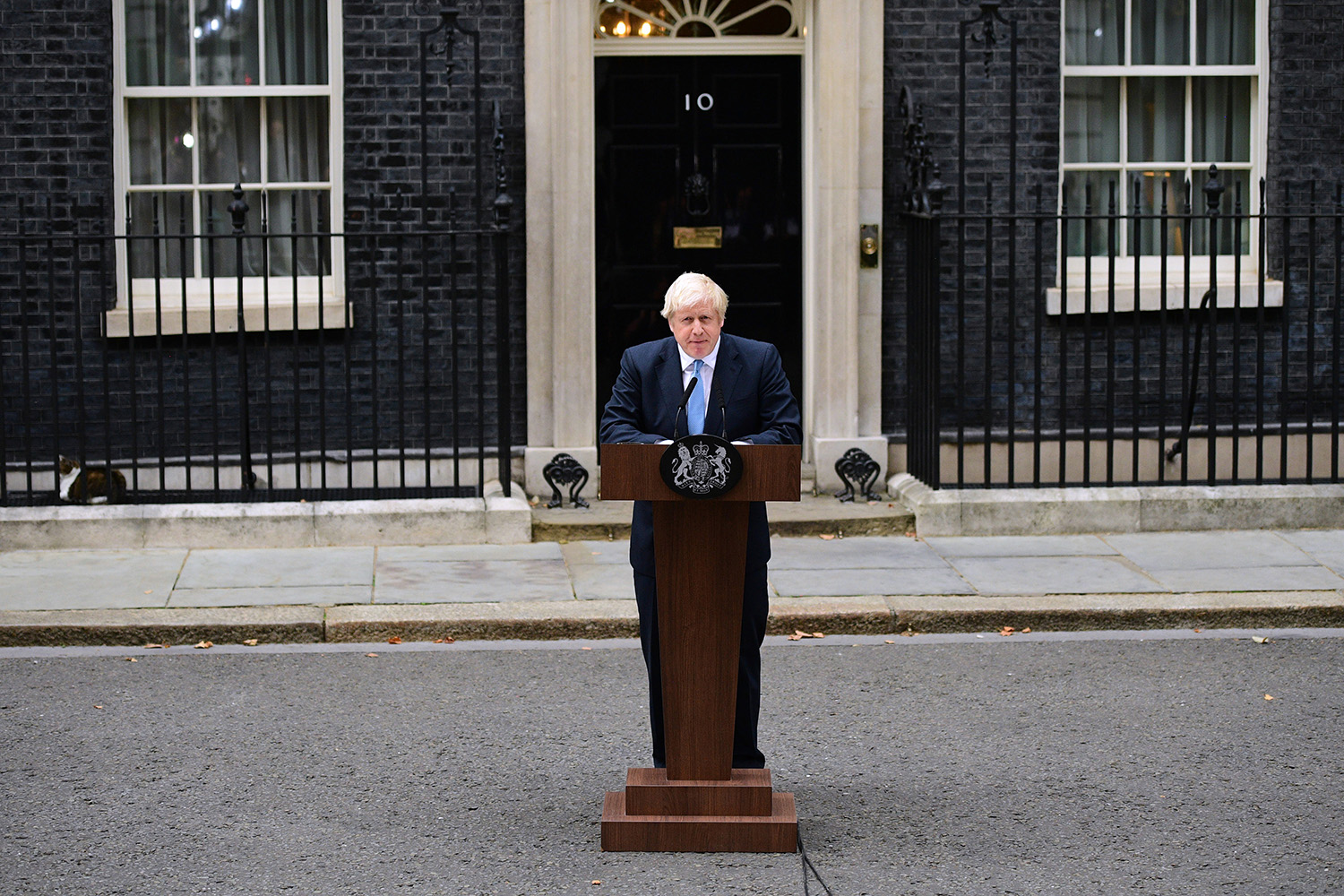 Britain’s Parliament returns from its summer recess today, and lawmakers are set to hold an emergency debate on the first part of a plan to block Prime Minister Boris Johnson from seeking a no-deal Brexit. Meanwhile, Johnson made clear in a televised speech on Monday that if the House of Commons goes ahead with the bill, he will call a snap election for Oct. 14. Johnson cannot simply call the election on his own; he would still need the support of two-thirds of Parliament to make it happen.

“MPs should vote with the government against Corbyn’s pointless delay,” Johnson said. “[T]here are no circumstances in which I will ask Brussels to delay. We are leaving on the 31st of October, no ifs or buts.”

Those supporting the bill, including an estimated 17 rebel Conservatives, say that the threat won’t deter them from voting to block a no-deal Brexit. “No. 10 has left us with little choice but to go into the chamber prepared to vote against the deal,” one told the Guardian. Johnson maintains they are undermining the government’s chances of renegotiating the existing Brexit agreement with the European Union.

Isn’t Parliament suspended? Not yet. While Johnson made the unconventional move to ask Queen Elizabeth II to prorogue Parliament last week, the current session will continue through early next week. Today, a Scottish court will hear arguments over the legality of that decision. (Thousands protested against it over the weekend.)

What would happen in a new election? Johnson has already threatened to “deselect” the Conservative rebels, which would prevent them from running as Conservative candidates. He appears confident that a new general election would allow him to expand his majority and room to maneuver. Labour leader Jeremy Corbyn has also endorsed a new election—seemingly confident that Labour could win—but some members of his party are not so sure, insisting that legislation blocking no deal must be in place first. Former Labour Prime Minister Tony Blair argued that going ahead with an election would amount to falling into Johnson’s trap in a speech on Monday. If Johnson were to lose an election in October, he would be the country’s shortest-serving prime minister.

U.S. withdrawal from Afghanistan draws nearer. The draft peace deal agreed between the United States and the Taliban—after months of negotiations—would see the United States withdraw nearly 5,000 troops in 135 days, U.S. envoy Zalmay Khalilzad said on Monday. Afghan President Ashraf Ghani has yet to comment on the agreement, which does not include a formal cease-fire. U.S. Secretary of State Mike Pompeo will discuss the proposed deal with NATO Secretary-General Jens Stoltenberg today in Brussels.

Italy’s anti-establishment party votes on new coalition. Italy’s Five-Star Movement will hold an online vote today to decide whether to join the Democratic Party—its historic rival—in a coalition government that would solve the ongoing government crisis. Prime Minister Giuseppe Conte has encouraged party members to support the partnership. A new coalition government would avert snap elections after the League party pulled out of the government.

U.S. Vice President Mike Pence meets Prime Minister Katrin Jakobsdottir in Iceland on Wednesday, where he is expected to discuss Russian and Chinese activities in the Arctic Circle. The prime minister, who has pursued progressive policies on LGBT rights and abortion, had previously told Pence she had other plans—a move widely viewed as a snub—before rescheduling. Later in the week Pence will also meet the prime ministers of Britain and Ireland.

Iran has renewed its threats to further reduce its nuclear deal commitments by Friday if the European parties to the agreement don’t push back against U.S. sanctions. Tehran has indicated that the third step will be stronger than the first and the second breaches. French President Emmanuel Macron is still leading the charge to salvage the deal.

India’s unmanned lunar module will attempt a moon landing on Saturday, which would be the country’s first. The Chandrayaan-2 mission left India on July 22 and is intended to study water deposits near the moon’s south pole.

A communications blackout in the Rohingya camps. Bangladesh has told telecommunications companies to cut access to the nearly one million Rohingya refugees in the camps around Cox’s Bazar within seven days. Officials say the decision is based on “security grounds,” but it could prevent refugees from communicating with family who remain in Myanmar, where more than 700,000 fled a military crackdown two years ago.

Huawei’s new smartphone. Chinese telecoms firm Huawei will debut a new smartphone later this month in Germany—without any Google services. The Mate 30 will the first new Huawei smartphone on the market since the company was blacklisted by the United States. Meanwhile, on Monday the United States and Poland signed a deal to cooperate on 5G technology amid U.S. security concerns over Huawei’s expansion in Europe.

Currency controls in Argentina. Argentina’s government has introduced capital controls to boost reserves in an attempt to slow the country’s ongoing currency crisis. The value of the Argentine peso improved on Monday, but the full effects of the policy might only be seen today as U.S. markets open. President Mauricio Macri had removed capital controls in 2015.

Tunisia’s presidential campaign. The 24 candidates in Tunisia’s presidential election started campaigning on Monday. They face a struggling economy and growing unemployment in the only democracy to emerge from the 2011 Arab Spring protests. The Sept. 15 vote follows the death of President Beji Caid Essebsi, the first democratically-elected leader after the uprising.

A rare set of giant panda twins was born at Berlin’s zoo over the weekend, marking the first-ever panda birth in Germany. The mother, Meng Meng, is on loan from China. The cubs must be returned to the country within four years.

For more on these stories and many others, visit foreignpolicy.com, subscribe here, or sign-up for our other newsletters. Send your tips, comments, questions, or corrections to morningbrief@foreignpolicy.com.

Avoiding actual war will be on each side’s mind.

Inflation remains a concern for central banks in Europe and beyond.