After a summer of discontent, a series of elections in Russia opens up a new chapter in its political history.

At the height of summer, the Russian capital was plunged into an unexpected political crisis as thousands of people took to the streets week after week to protest the election commission’s decision to bar opposition candidates from running in this Sunday’s elections for Moscow city council.

The largest anti-government protests since Vladimir Putin returned to the presidency in 2012 were greeted with a heavy-handed response: Armor-clad riot police beat unarmed protestors with batons, and more than 1,300 people were arrested in a single day at the peak of the crackdown.

The Moscow city council elections were an unlikely political lightning rod. The body has long been regarded as largely insignificant with little real power. But the outcry shone a light on a new political reality emerging in Russia as Putin approaches his constitutionally imposed term limit in 2024. Economic stagnation and the lingering uncertainty of what’s to come after 2024 has already begun to place strain on the system that has become synonymous with the Russian president as unrest has been brewing not only at the grassroots level, but also among a political elite that has shown signs of doubt in the country’s trajectory.

“The situation is so fluid right now that the horizon is only a few months,” said Sergei Medvedev, a professor of political science at Moscow’s Higher School of Economics. “You would be an idiot to be planning too far ahead in today’s Russian politics.”

After five years of falling incomes, Russians are showing an increasing appetite for protest, particularly on the socioeconomic issues that eat at the heart of Putin’s social contract of authoritarian rule in exchange for stability and prosperity. Putin’s approval ratings dropped steadily since last summer, when the government announced plans to raise the retirement age, hitting a 13-year low in May. Protests have sprung up across the country against issues such as planned garbage dumps, proposals to build a church on popular parkland, and a land swap between two republics in the North Caucasus.

“More and more people are growing discontent, and what is most important for me is that people are losing [their] fear,” said Natalia Arno, the president of the Free Russia Foundation, a U.S.-based nonprofit. “For many years people wouldn’t be protesting or they would be afraid of participating in unsanctioned rallies.”

Independent candidates in Moscow saw Sunday’s election as a way to send a message that the opposition was still capable of being a political force after years of systematic pressure from the authorities. With key opposition figures imprisoned and many candidates unable to get on the ballot, that outcome now seems unlikely. Consecutive protests, which brought out more than 50,000 people on Aug. 10, have dwindled in the final weeks before the vote as infighting exposed divisions within the opposition.

Lyubov Sobol, a candidate in the Moscow elections who has emerged as a leader of the recent protests, remains undeterred. “I want to live in a country where rights and freedoms are respected, a country with independent courts and independent media,” she said in an interview with the Associated Press.

The longest-serving ruler since Soviet dictator Joseph Stalin, Putin has managed to benefit from high oil prices, antagonism with the West, and his promise to restore Russia’s greatness to maintain his popularity, sideline rivals, and decimate the opposition. But after 20 years in power, the potency of these approaches has been spent, and the Kremlin appears to be struggling to find a new rallying cry as the country embarks on the road to 2024.

“This is a symptom of their other tools not working,” said Andrei Kolesnikov, a senior fellow at the Carnegie Moscow Center. “They have no new ideas.” 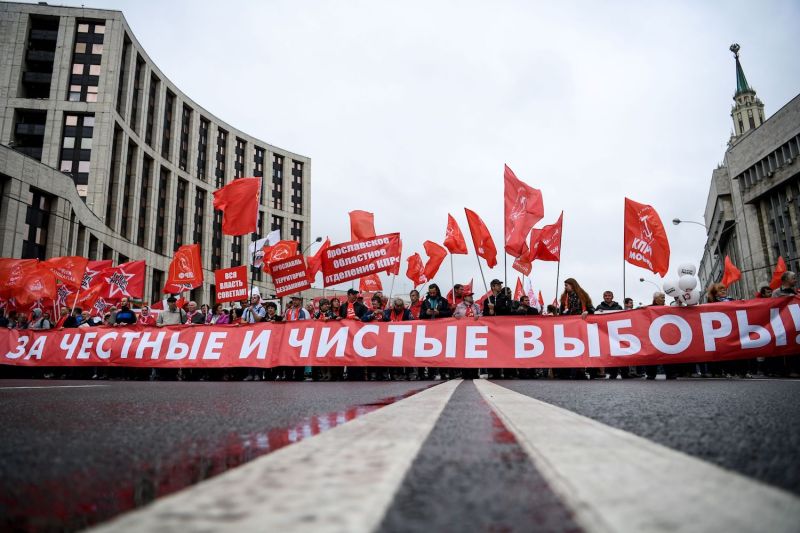 Russian Communist Party members and supporters attend a protest rally against the exclusion of some city council candidates from Moscow’s upcoming election in central Moscow on Aug, 17. (Kirill Kudryavtsev/AFP/Getty Images).

In Moscow and 16 other regions, Russians will go to the polls on Sunday for local and regional elections seen as a critical test of the Kremlin and its regional representatives’ ability to successfully stage manage the vote despite a sharp drop in the approval ratings of both Putin and the party that backs him, United Russia.

To prevent a repeat of last year’s gubernatorial elections, when a number of Kremlin-backed candidates were unexpectedly defeated, Putin has replaced several regional governors ahead of Sunday’s vote. In Moscow, the party’s brand has grown so toxic that even candidates with long-standing ties are distancing themselves, running as independents while still accepting funds from foundations linked to the party. The brutal response to the Moscow protests has been criticized by some members of the elite for mismanaging the local dispute and turning it into a national one.

The results will be a bellwether ahead of parliamentary elections in 2021, when it will prove critical to maintain United Russia’s two-thirds majority should constitutional changes be needed as part of any plans to keep Putin in power after 2024.

“Putin’s main focus these days is foreign policy, so he’s fine to outsource domestic politics to the technocrats,” said Medvedev, the political science professor. “They are looking at different scenarios now, and the Duma elections will play a role in that.”

Although the Kremlin’s politicos don’t appear to have settled on a plan for what to do in 2024, there are a few cards on the table. One, put forward in July by Vyacheslav Volodin, an influential aide to Putin who is now the speaker of the Russian parliament, proposed changing the constitution to give parliament more authority, including the right to approve government ministers before they are appointed. Keeping a strong hold on the Duma would widen Putin’s room for maneuver and open the door for him switching roles and becoming prime minister again, but this time with a much more powerful brief.

Another option would be simply to change the constitution, although this would undermine Russia’s simulacrum democracy and Putin’s efforts to distinguish himself from dictators elsewhere in the former Soviet Union. A less likely scenario involves dusting off a 20-year-old union treaty with neighboring Belarus that, if fully implemented, would create a role for Putin as leader of the new union sate.

This is not the first time the Kremlin has contended with mass street protests. When Putin returned to the presidency in 2012 after castling with Dmitry Medvedev as prime minister for a term, tens of thousands of Russians took to the streets in Moscow in the largest protests seen in Russia since the collapse of the Soviet Union. What makes the current unrest more precarious for the Kremlin is that for the first time it has been coupled with economic stagnation and signs of unease among the ruling elite.

“It’s really the confluence of these three things that is somewhat unprecedented,” said Sam Greene, the director of the Russia Institute at King’s College London.

Putin has proved adroit at managing the competing clans within the Russian security services, but in 2007 when Putin was first headed toward his term limit of two consecutive terms in office, it triggered a vicious turf war among these groups as they sought to shore up their own positions and take out rivals to prepare for an uncertain future. The power struggle was characterized by unexpected arrests of high-ranking officials in a bid to take out rivals. Experts have pointed to such arrests as that of former government minister Mikhail Abyzov and the head of a regional branch of the security services as a sign that a similar battle may now be brewing now.

“There’s all of this kind of elite infighting and jockeying for influence, because there’s so much uncertainty about what is going to happen next,” said Andrea Kendall-Taylor, a former deputy national intelligence officer for Russia and Eurasia at the U.S. National Intelligence Council, now a senior fellow at the Center for a New American Security.

Putin is famously wary of popular uprisings like those that toppled governments in neighboring Georgia and Ukraine, but it’s the loss of elite support that could prove to be more damaging, said Greene, the co-author of Putin v. the People.

“Most autocrats fall because they lose the ability to control the top of the system,” he said, “One can contribute to the other, a crisis in the streets can create a crisis of confidence among the elites.”

Despite the recent cracks, the Kremlin’s position has not wavered. But with five years to go until Putin is scheduled to step down, few are willing to bet on what will come next. In the meantime, many observers fear that the indiscriminate arrests and repression seen in Moscow this summer have set a new normal for how the Russian authorities will respond and will look to eliminate the already limited space for opposition politicians to participate in the system.

“My instinct tells me that they’ll respond with using more force and greater repression,” said Angela Stent, a professor at Georgetown University and the author of Putin’s World: Russia Against the West and with the Rest.

There are already signs that this is underway. A report published earlier this year by the Washington-based public interest law firm Perseus Strategies with support from the Russian human rights foundation Memorial outlined how the Russian government was implementing an “ever-increasing array of laws specifically designed to criminalize acts of everyday life,” such as imposing steep fines for making insulting remarks about the state online and imprisoning people on extremism charges for saying that Crimea belongs to Ukraine.

“Putin will look to stay in power, the mechanism is what is in dispute,” said Kolesnikov, of the Carnegie Center Moscow. “It’s in Putin’s interest to keep all his plans secret, even from his inner circle, otherwise he can make himself into a lame duck.”

There’s More to Russia Than Putin

How the country’s governors will shape its future.