Why a controversial citizens register may leave 1.9 million residents of Assam stateless.

By Ravi Agrawal, the editor in chief of Foreign Policy, and Kathryn Salam
September 3, 2019, 3:02 PM

Welcome to Foreign Policy’s weekly South Asia Brief. We would love to hear from you at newsletters@foreignpolicy.com. If you would like to receive this in your inbox, sign up here.

Welcome to Foreign Policy’s weekly South Asia Brief. We would love to hear from you at newsletters@foreignpolicy.com. If you would like to receive this in your inbox, sign up here.

On Saturday, 1.9 million residents of India’s northeastern state of Assam learned that their names were left off a controversial citizens’ register, putting them at risk of becoming stateless. The National Register of Citizens (NRC) is meant to track Indian nationals living in Assam, which experienced waves of mass migration in 1947 when India became independent and in 1971 when East Pakistan became Bangladesh.

Assam shares a 163-mile border with Bangladesh, and a third of its 32 million residents are Muslim—the second-highest ratio after India-administered Kashmir. The NRC, first compiled in 1951, marks residents of Assam as foreigners if they cannot prove they lived there before Bangladesh declared independence on March 24, 1971. Updating the NRC was a key pledge of Prime Minister Narendra Modi’s 2019 election campaign.

What happens next? The people who didn’t make the NRC list can appeal to so-called Foreigners Tribunals, but the process will be messy. The government has allowed only 120 days for the 1.9 million residents to prove they have the paperwork to stay. And paperwork is a problem in India: Not only are names frequently misspelled (or incorrectly transliterated), but many people lack land deeds or legitimate proof of residence. Daily wage laborers will lose valuable working hours trying to clear their status. It’s difficult to imagine a few hundred tribunals handling nearly 2 million petitions within three months, and Amnesty International has already called those courts “biased and discriminatory.”

There’s also the question of what to do with the people India declares foreigners. Can they be deported? “We can’t take any more [people],” said Bangladeshi Foreign Minister A.K. Abdul Momen in July, adding that Bangladesh was already “the most densely populated country on the planet.” Given that deportations seem infeasible, one option could be that excluded residents get work permits but lose their right to vote.

Hindus and Muslims. As the Indian website Scroll.in points out, it is not entirely accurate to say the NRC has an inherent bias against Muslims: Many Bengali Hindus have also been excluded from the citizens’ list, which explains why the ruling Bharatiya Janata Party (BJP) has expressed concern over the process. Still, judging by what BJP leaders have said about the NRC, fears about the party targeting Muslims are not unfounded.

In April, then-BJP President Amit Shah referred to Muslim immigrants from Bangladesh as “termites” and, in a barely disguised dog whistle, stated that his party would give citizenship to Hindus, Buddhists, Jains, and Sikhs from Bangladesh and Pakistan. If the BJP passes its proposed Citizenship Amendment Bill—a way for non-Muslim refugees to gain Indian papers—then Hindus who failed to make the NRC could find a way back in. Shah, who is now home minister and the second most powerful person in India, has promised to extend Assam’s NRC to the entire country.

Take Modi’s BJP seriously—and literally. In October 2016, the Silicon Valley billionaire Peter Thiel famously weighed in on press coverage of then-U.S. presidential candidate Donald Trump by saying that the media “never takes him seriously but it always takes him literally.” Voters did exactly the opposite, taking Trump’s campaign quirks seriously but not literally. In India, it’s time to take Modi both literally and seriously.

In 1998, the BJP delivered on its promise to test a nuclear weapon. Since becoming prime minister, Modi has been making good—with mixed results—on promises to clamp down on corruption. Now in his second term, Modi has delivered on campaign pledges to revoke Kashmir’s autonomy and to update the NRC. Other promises, such as the BJP’s long-standing goal to build a Hindu temple at the site of a demolished mosque in Ayodhya, may well be next. Nobody should be surprised anymore. Modi’s moves have already been widely telegraphed—and endorsed in the world’s biggest election.

Arms race. Pakistan announced on Thursday that it had successfully tested Ghaznavi, a surface-to-surface ballistic missile it says can deliver multiple types of warheads up to 180 miles. The airspace around Pakistan’s largest city, Karachi, was reportedly closed for several days during the testing.

Marriage equality. In Bangladesh, brides have long had to pick from three categories to describe themselves on their marriage certificates: virgin, widowed, or divorced. After a five-year legal battle and an even longer campaign by women’s rights groups, the country’s top court has ruled that the term “virgin” should be replaced with “unmarried.” Grooms will now also have to select from among the three categories.

Only 48 percent of women around the world are employed. The labor force participation rate in the United States, for example, is 56 percent, and China comes in at 61 percent.

When it comes to female labor force participation, which are the top three ranking countries in South Asia? 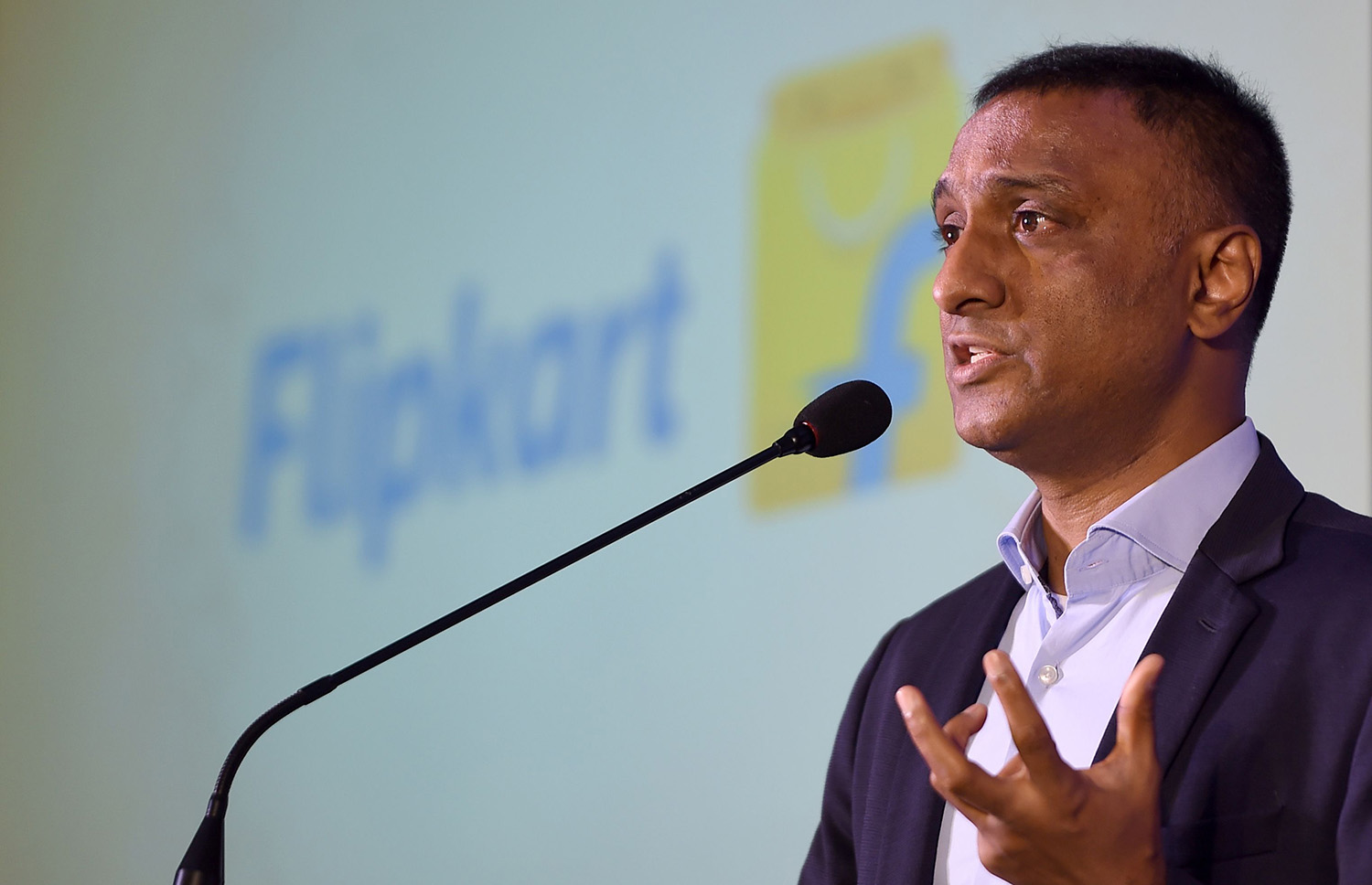 Kalyan Krishnamurthy, the CEO of Flipkart, speaks during an event to launch the e-commerce platform’s “Samarth” initiative in New Delhi on July 31.MONEY SHARMA/AFP/Getty Images

Alexa, what’s English? The e-commerce giant Flipkart, Amazon’s main rival in India, has launched a Hindi interface on its shopping app. The Walmart-owned company’s move is long overdue: Most English readers in India are already online, while the fastest growth in new internet users comes from Hindi speakers among the country’s middle classes. Flipkart now plans to introduce other Indian languages to its platforms.

Bank boost. India announced plans last week to merge 10 state banks into four entities in a bid to make them more efficient and to better pass on low interest rates to consumers. The move came as government data revealed India’s GDP grew by just 5 percent between April and June, the slowest pace in more than six years.

Power deal. Bangladesh signed a 22-year deal to buy electricity from India’s Reliance Power on Sunday in a move that will see the company invest $1 billion to set up a giant power plant near Dhaka. Bangladesh also signed a deal with China to build renewable energy projects worth $400 million, according to Reuters.

In Nepal, it’s electric. By the late 1990s, the air quality in Kathmandu was so poor that residents could seldom see the peaks of the Himalayas, once visible for a third of the year. To reduce pollution, the city government rolled out a fleet of zero-emission electric vehicles to replace some public buses. By 2000, it was the biggest fleet in the world. Nepal’s government is pinning its hopes on a new fleet to help meet its commitments under the Paris climate agreement. The journalist Atul Bhattarai lays out the history of Kathmandu’s famed Safa Tempos for CityLab.

Patriot pop. A new genre of music is spreading among Indian Facebook, Twitter, and TikTok users, and it urges Indians to move to Kashmir, buy land there, and marry Kashmiri women. The “patriotism pop” songs are hits among younger listeners in northern and eastern India. Nitesh Singh Nirmal, a Modi supporter, claims to have released the first such song, which has over a million views on YouTube.

Among the other countries, Bhutan ranks second at 58 percent, Afghanistan third at 49, Maldives fourth at 42, Bangladesh fifth at 36, Sri Lanka sixth at 35, and Pakistan and India seventh at 24.

Finally, a note about an upcoming event: On Tuesday, Sept. 10, at 4:30 p.m. in Washington, Ravi will be in conversation with U.S.-India Business Council President Nisha Biswal, who is also the former assistant secretary for South and Central Asian affairs at the U.S. State Department. Read about the event here, and write to diana.marrero@foreignpolicy.com for an invite.

As tensions between Tajikistan and Kyrgyzstan flared, Moscow and Beijing chose to remain on the sidelines.