With prospects for a negotiated settlement between the United States, the Afghan government, and the Taliban in disarray after U.S. President Donald Trump’s abrupt weekend cancellation of an alleged Camp David summit to advance peace talks, Afghans are bracing for a renewed round of terrorist violence and mourning what seem like vanishing hopes for peace.

Few in Afghanistan are as well equipped to understand the whiplash cycle of violence, repression, reconciliation, liberation, and renewed violence than the 500 people that live in Sayedabad, a village in southern Afghanistan’s Helmand province. Since the beginning of the U.S. war in Afghanistan in 2001, Sayedabad has bounced between government and Taliban control six times.

I first visited Sayedabad in 2016, and came to pin what optimism I had for Afghanistan’s future on the village’s experience reconciling with a Taliban that seemed to have moderated since its most brutal incarnations in the 1990s and 2000s. If Sayedabad was anything to go by, I thought, Afghanistan’s future might not be as bleak as many predict.

Until earlier this month, that is, when I got a message from a friend in Helmand. 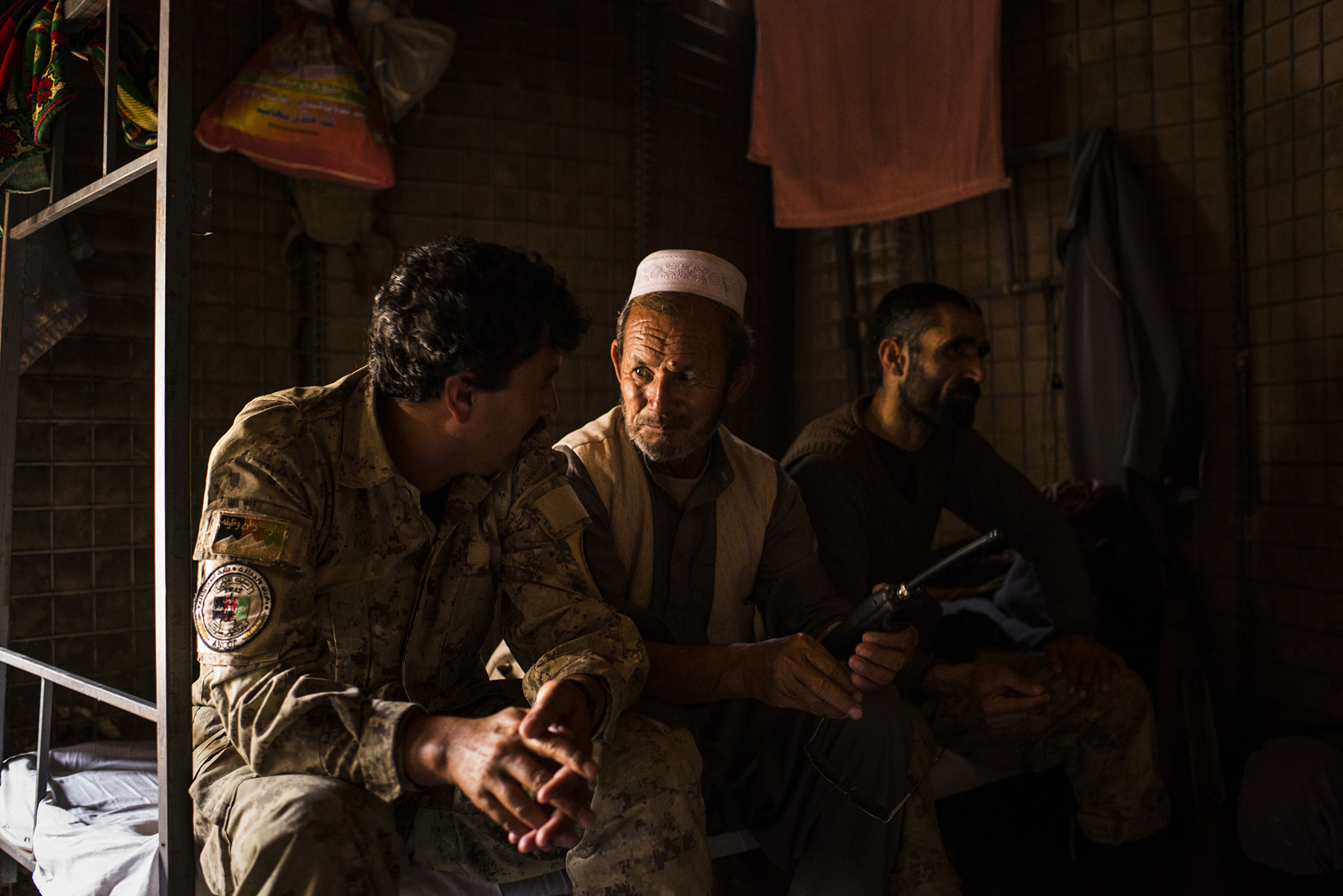 Ghulam Sakhi speaks with a member of the ANA and one of his Afghan Local Police (ALP) fighters inside an ALP outpost in March 2016, two months before the Taliban captured the village.Andrew Quilty for Foreign Policy

It included a photograph of an elderly man lying on a bitumen road. Long, violet-gray shadows, cast by onlookers out of the frame, matched the color of the man’s traditional clothes. His white skullcap had tumbled off the back of his head, but there was no sign of the bullets that had struck him down.

“Ghulam Sakhi,” the message read, “is not with us anymore.” 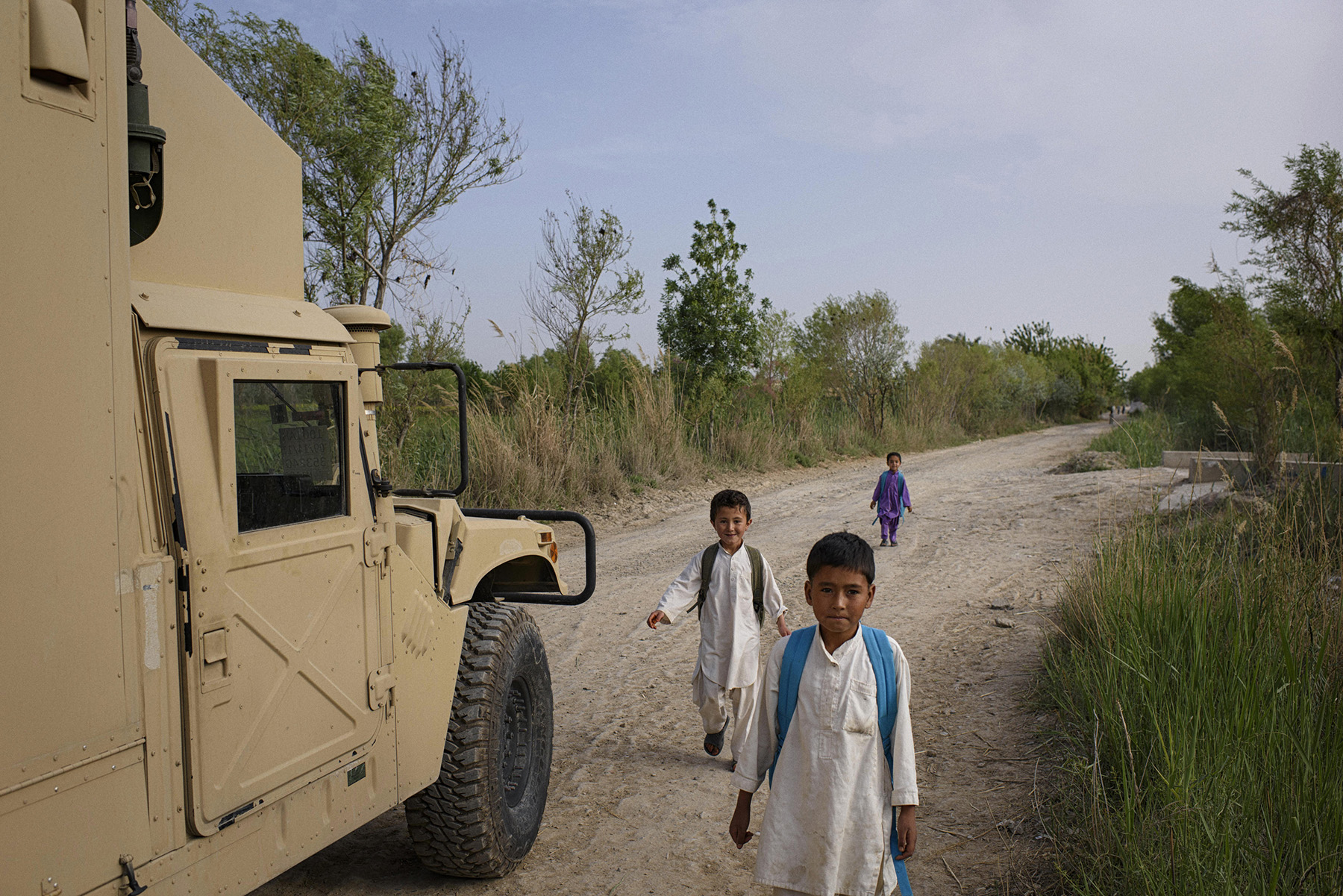 Young students walk to school past an armored Humvee in the Sayedabad area of Helmand’s Nad Ali district on March 29, 2016. Andrew Quilty for Foreign Policy

Sayedabad was one of several villages that bloomed in Helmand’s desert in the 1960s, when American engineers built an irrigation canal, luring families from central and northern Afghanistan to cultivate the land and build homes. The village is built around a school, from which earthen pathways radiate out through crops of wheat, corn, and opium poppy. Scattered among the crops today are houses belonging to the 70 to 80 ethnic Hazara families that settled there half a century ago.

I’d been enchanted by Sayedabad since my first visit there, in March 2016, when I met Ghulam Sakhi, then 61, the commander of the village’s Afghan Local Police (ALP) unit, and the warmest of hosts. Sakhi was 16 years old when he migrated with his family to Sayedabad from Ghazni province. He lived there until he was a grandfather, not leaving until 2016, and only because he was forced out by the Taliban.

He was named Sayedabad’s ALP commander in 2011. He didn’t have any military experience, and his kindly face contradicted his role as a militia commander. His reading glasses, which darkened in daylight, gave him the appearance of a high-school history teacher, and he looked more comfortable holding a glass of green tea than a VHF radio. While touring a half-dozen police checkpoints, he insisted I photograph him brandishing a different weapon at each. He looked faintly ridiculous, but the men under him, all from the village, including two of his sons, treated him with the respect of a commander and the reverence of an elder. 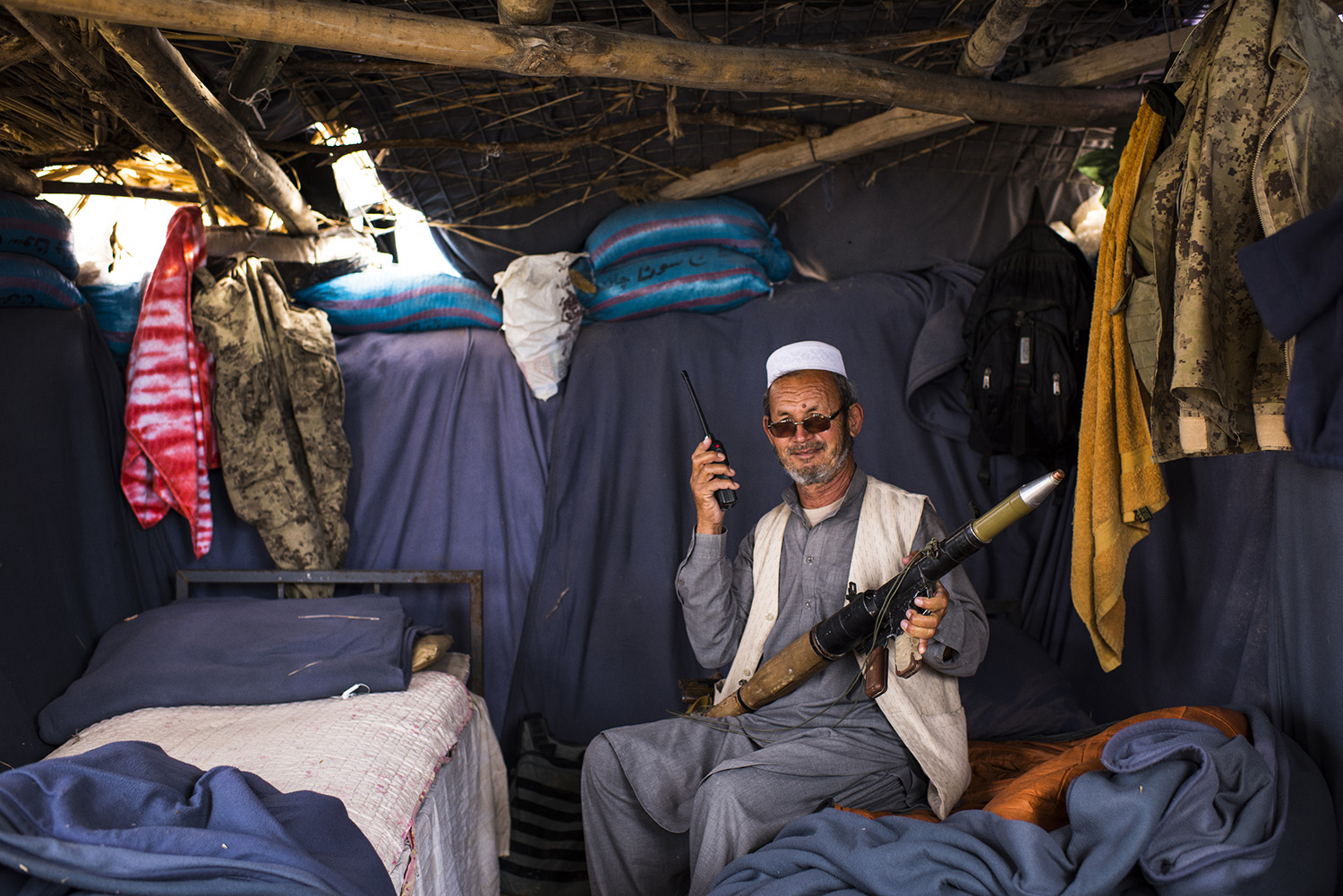 Ghulam Sakhi requested his photo taken with various weapons, including a rocket-propelled grenade launcher and his VHF radio, while touring checkpoints on March 28, 2016. Andrew Quilty for Foreign Policy

He’d taken the dangerous task of heading the local police because he felt a particular duty to protect the school in Sayedabad—the only one in Helmand province that allowed coeducational classes beyond the age of nine.

In the spring of 2016, the Taliban were again on the offensive. After tens of thousands of foreign combat forces withdrew at the end of 2014, momentum on the battlefield swung to the Taliban. Insurgent fighters had flooded Helmand and government forces were in retreat. But even as violence hammered at its gate, Sayedabad was unusually tranquil, and the school was still in session. However, since it was the tallest building in the village, soldiers from the Afghan National Army had built machine gun nests on the roof, from which they frequently fired, and were fired upon, even as classes continued below.

Sakhi’s task had become critical. Sayedabad, and by extension the school, had been on the front line for six months, and white Taliban flags could be seen from the roof, just a few hundred yards away. One night, Sakhi’s eldest son, Rohullah, dressed in a pink perahan tunban and an ammunition vest, escorted us through the dark to a front-line position where ALP members fired machine-gun rounds toward suspected Taliban positions. 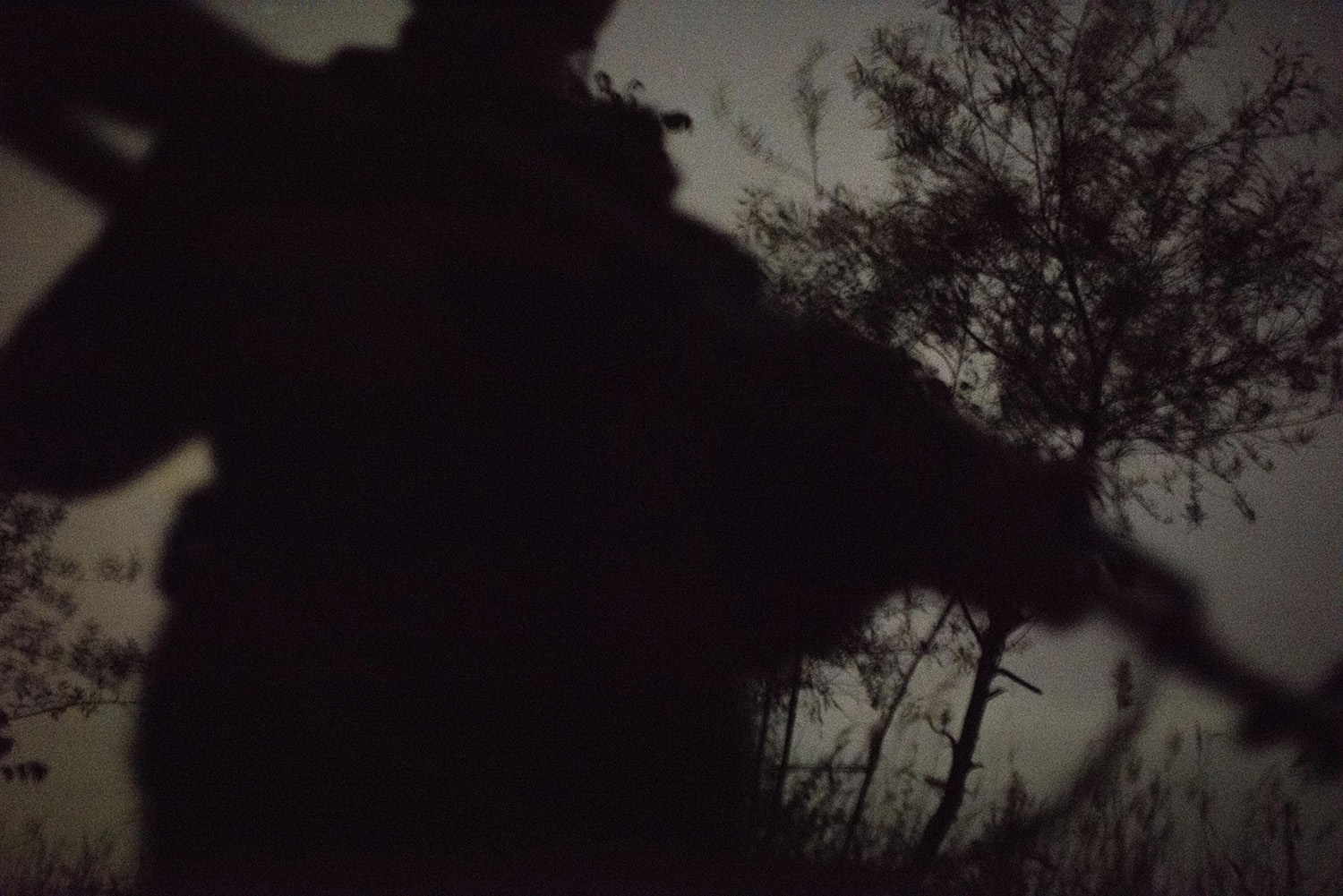 An ALP policeman patrols in the middle of the night between outposts in the Sayedabad area of Helmand’s Nad Ali district, after a small nighttime skirmish with Taliban fighters, in March 2016. Andrew Quilty for Foreign Policy 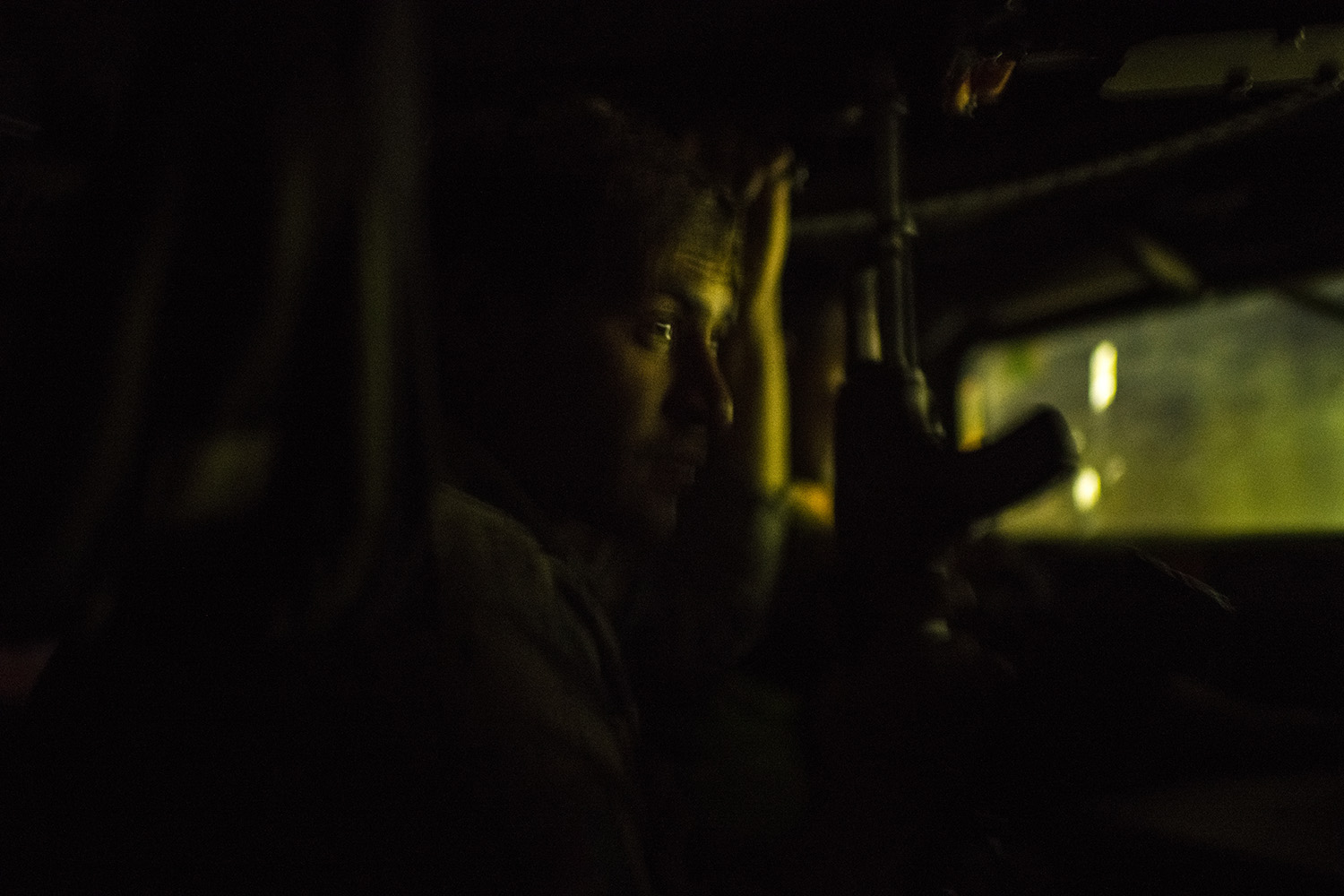 Members of the Afghan Border Force (ABF) drive along the front line in a convoy from the village of Sayedabad, in Nad Ali district, on June 23. There, the ABF and other government forces are holding positions along the line that divides territory held by the Taliban from land retaken by government forces over the past 12 months or so. Andrew Quilty for Foreign Policy

“If the Taliban take Sayedabad,” Sakhi said at the time, “they will go all the way to Lashkar Gah,” the capital city of Helmand province.

Within a month, as word spread that the Taliban were massing for an assault, most residents left. On May 11, 2016, the Taliban swarmed into Sayedabad. Government forces were coming under attack across the province and Sakhi, alongside 45 ALP fighters and 100 other police and soldiers stationed in Sayedabad, was practically surrounded. He and other commanders decided to leave, but were ambushed twice during their retreat. Two ALP fighters were killed, as well as 10 soldiers and six national police.

He made it to Lashkar Gah, but when the Taliban pushed all the way to the Helmand River on the western side of the city and began threatening him by phone, his son Rohullah booked him a flight to Kabul, where he lay low for several months.

Slowly, a degree of normality returned to the village. Residents trickled back warily, and village elders negotiated the release of a handful of government fighters who’d surrendered to the Taliban.

Some of the insurgents’ excesses were curbed, too. The young fighters who overran the town initially set fire to a handful of classrooms, but were soon ordered by their superiors to open the school.

“They were told to treat people well,” said Khadim Ali, headmaster at the time. “Otherwise, it would be bad for their future.” Around 100 boys resumed school in classrooms that hadn’t been damaged. Religious studies were mandatory, but prayer wasn’t enforced during school hours.

When the Taliban had captured Sayedabad in 2008, they’d banned school altogether, Ali recalled. Then, he had fled to avoid execution. This time, since the Ministry of Education had begun coordinating with Taliban counterparts in Helmand, he knew it would be safe to stay.

But there were limits to the Taliban’s benevolence. Girls were once again forbidden from attending school. After consultations with village elders, however, local female teachers were allowed to instruct girls up to fourth grade in private homes.

Still, while they were strict toward Sayedabad’s residents between 2016 and 2018, the Taliban weren’t cruel like before, giving weary local residents a glimmer of hope. “They have made big changes,” said the school’s principal, Mohammad Safar Jafari. “This time, when they needed tables and chairs, they took them, but they didn’t destroy things like they did the previous times.” 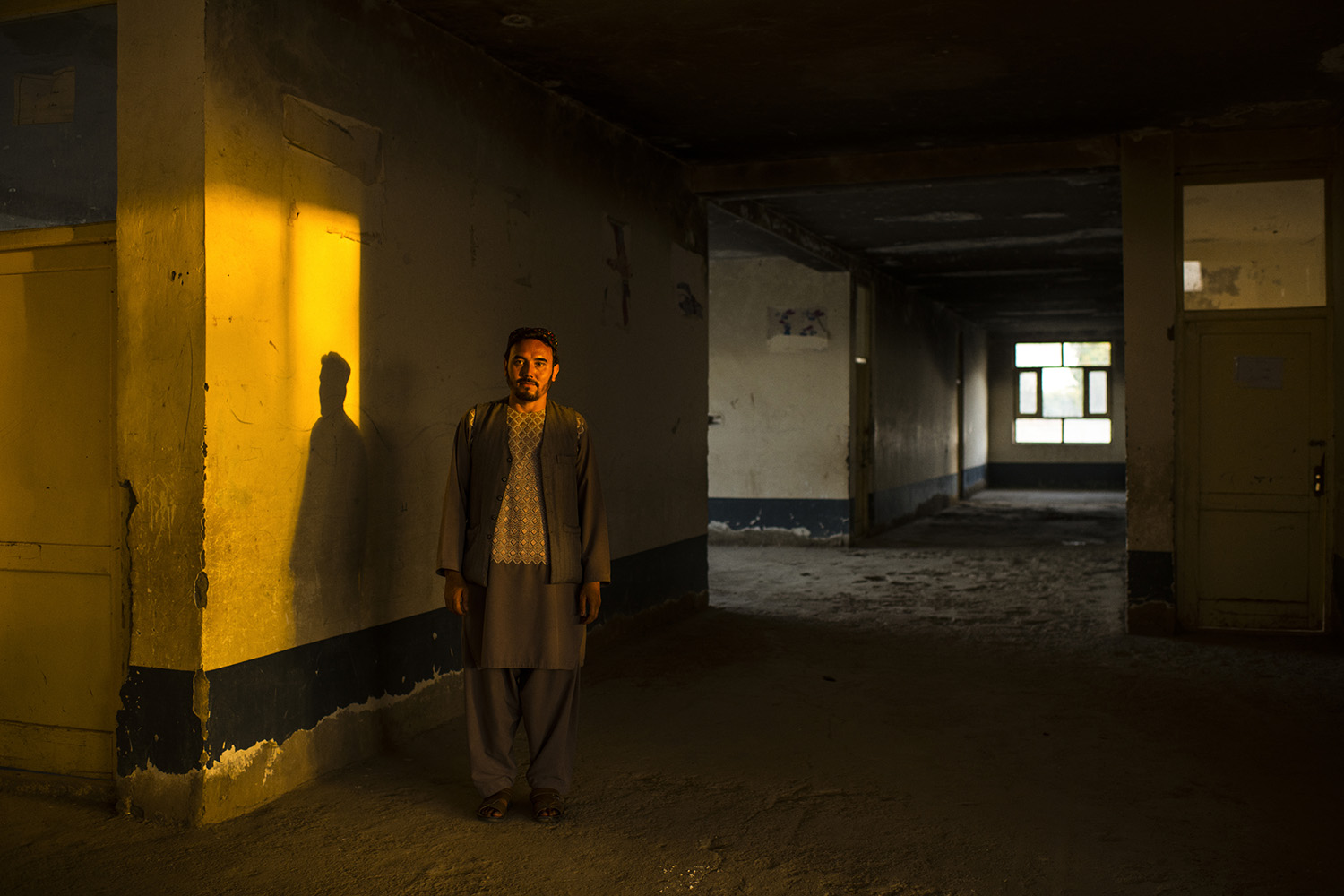 Mohammad Safar Jafari, 37, inside the Sayedabad School on June 23, has been the school’s principal since his predecessor was killed in fighting in 2012. 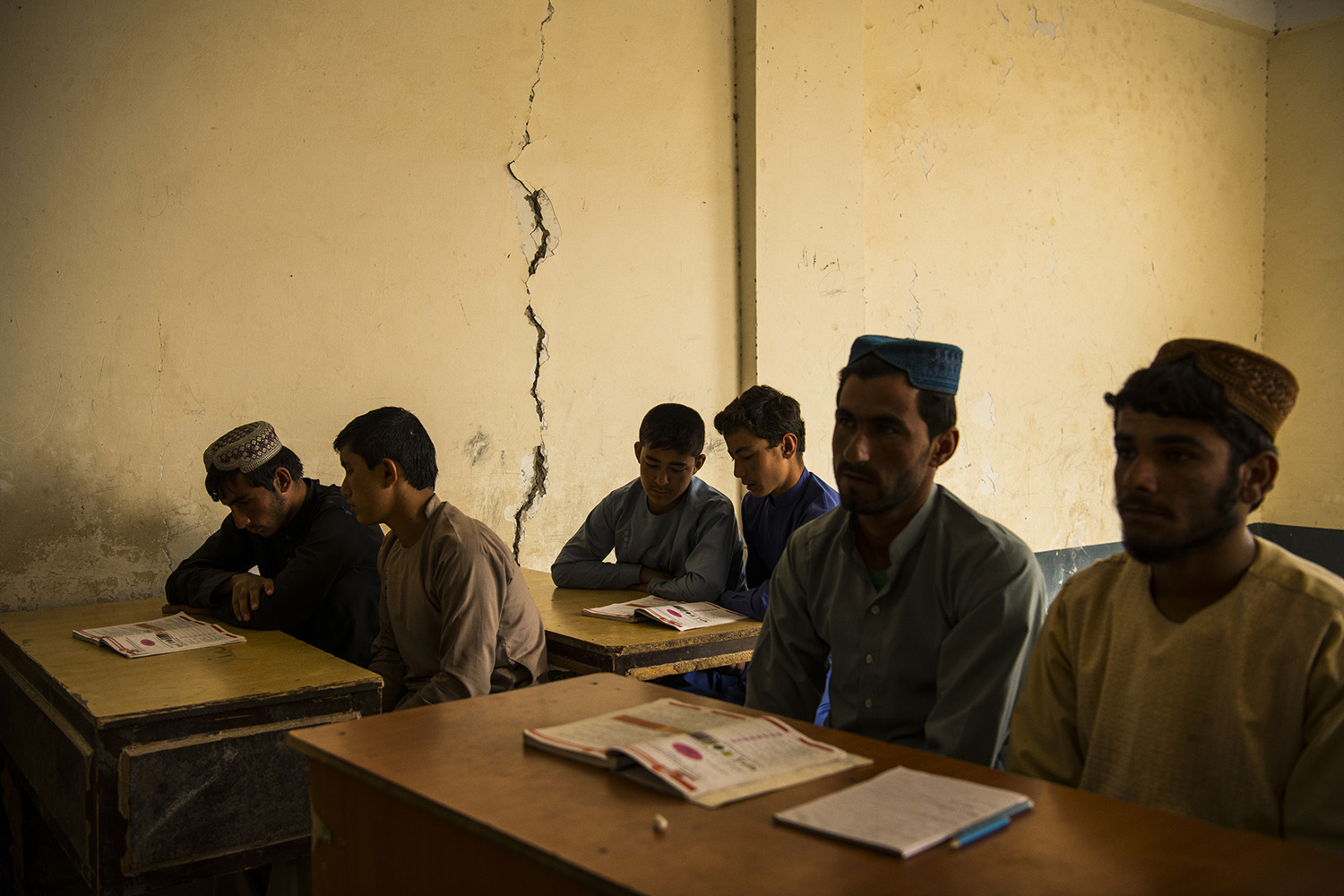 Ninth graders study English at the Sayedabad School in November 2018, months after it reopened under government control following more than two years under Taliban rule.

Last November, soon after Sayedabad had been retaken by government forces after two and a half years under the Taliban, Ali, the headmaster, told me that the only difference was that taxes were no longer being collected. And even though the government returned, few residents did.

“Those that left mostly haven’t returned,” Ali said. “They fear the government can’t protect them.”

“Those that left mostly haven’t returned. They fear the government can’t protect them.”Ghulam Sakhi was reluctant, too. The Taliban never took Lashkar Gah as he’d feared, but even there, his family didn’t like him leaving the house for fear of his safety, he told me when I visited in June this year. He made only three visits back to Sayedabad since the Taliban were forced out, covering his face with a scarf each time. “They took everything from my house,” he said of the Taliban. “All that’s left are the walls.” 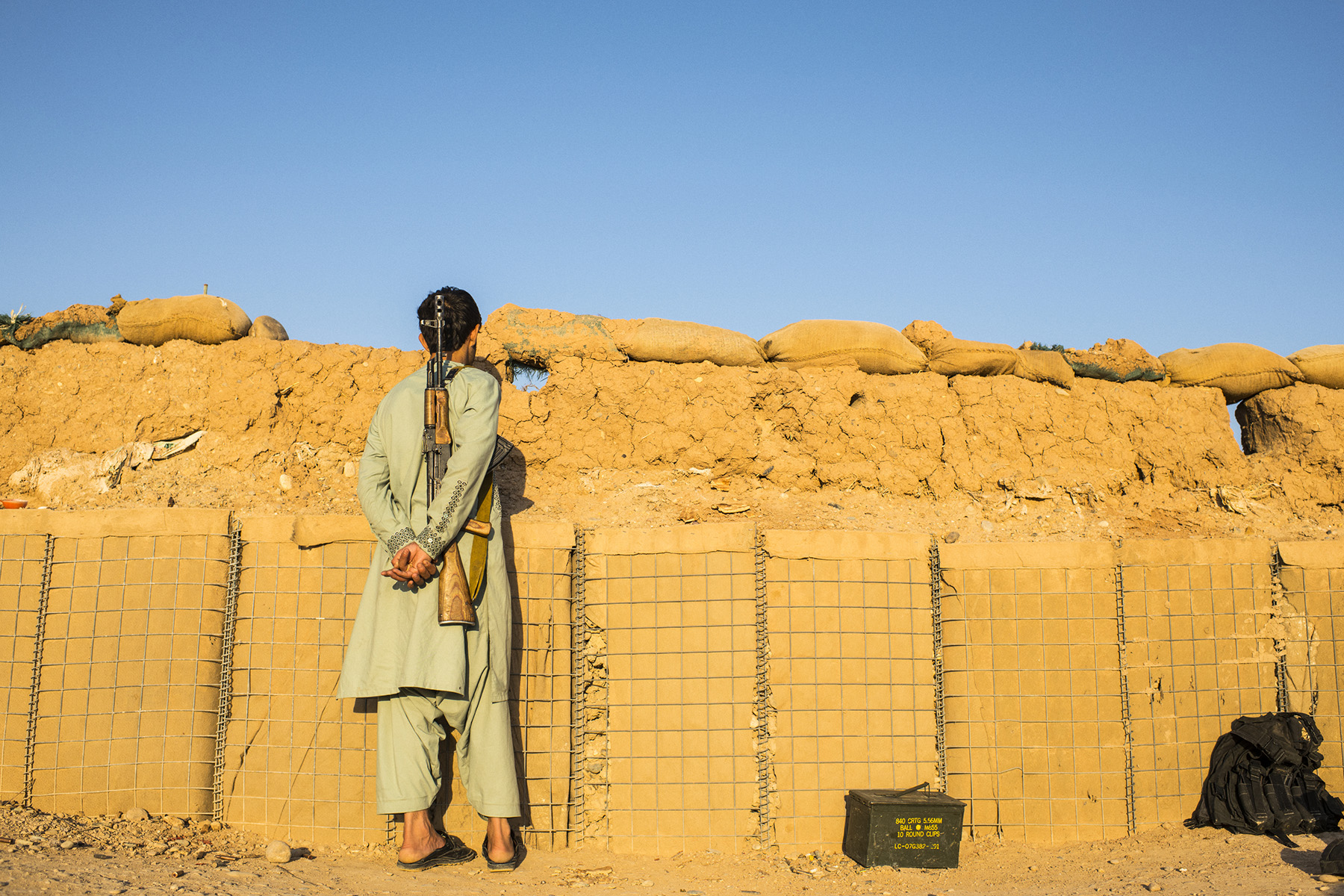 A member of the Afghan Border Force guards a checkpoint at dawn in Helmand province on June 24. Andrew Quilty for Foreign Policy 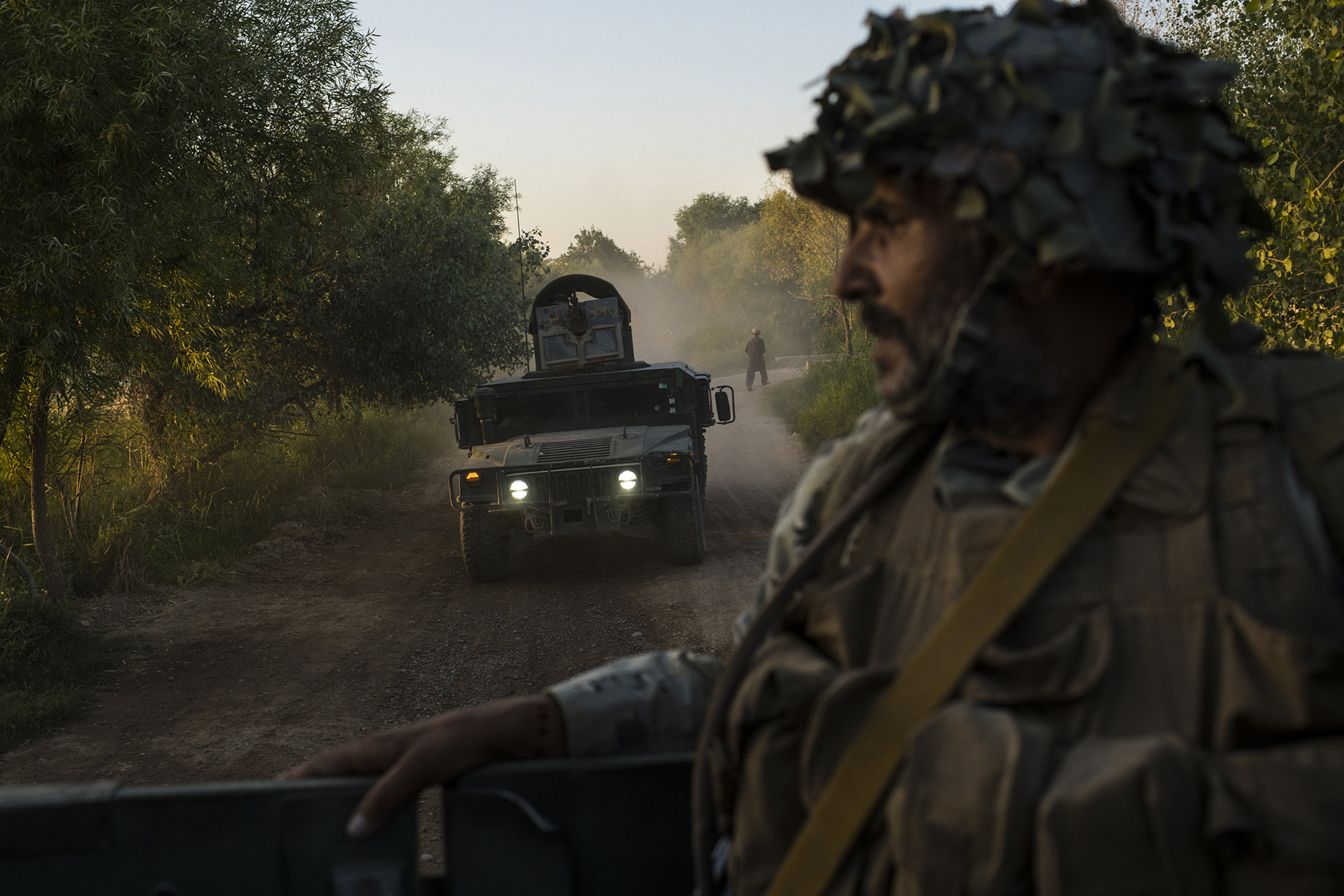 Members of the ABF ride in a convoy that departed Lashkar Gah, the capital of Helmand province, driving through Nad Ali district on their way to the village of Sayedabad on June 23. Andrew Quilty for Foreign Policy

What about peace with the Taliban? “Yes, why not?” Sakhi said. “It’s like I’m living in a prison now. I could go back to Sayedabad, walk freely and live my life.”

He talked of buying a sheep and a cow, and spending days like he did during his last Eid holiday in Sayedabad, in 2015: sitting on carpets under the apricot tree outside his home, drinking milky tea with friends.

In Lashkar Gah, his doctor told him he needed exercise, so he’d taken to walking for an hour every morning after dawn prayers at a nearby mosque. On his return, close to home, he’d pass his son Rohullah riding his bicycle to work.

Soon after sunrise on Monday, Sept. 2, Sakhi neared home from his morning walk in Lashkar Gah, but he still hadn’t passed Rohullah, who’d been delayed at home. Two men on a motorcycle, their faces wrapped in scarves, approached from behind. The passenger fired a pistol four times, and Sakhi fell to the ground. 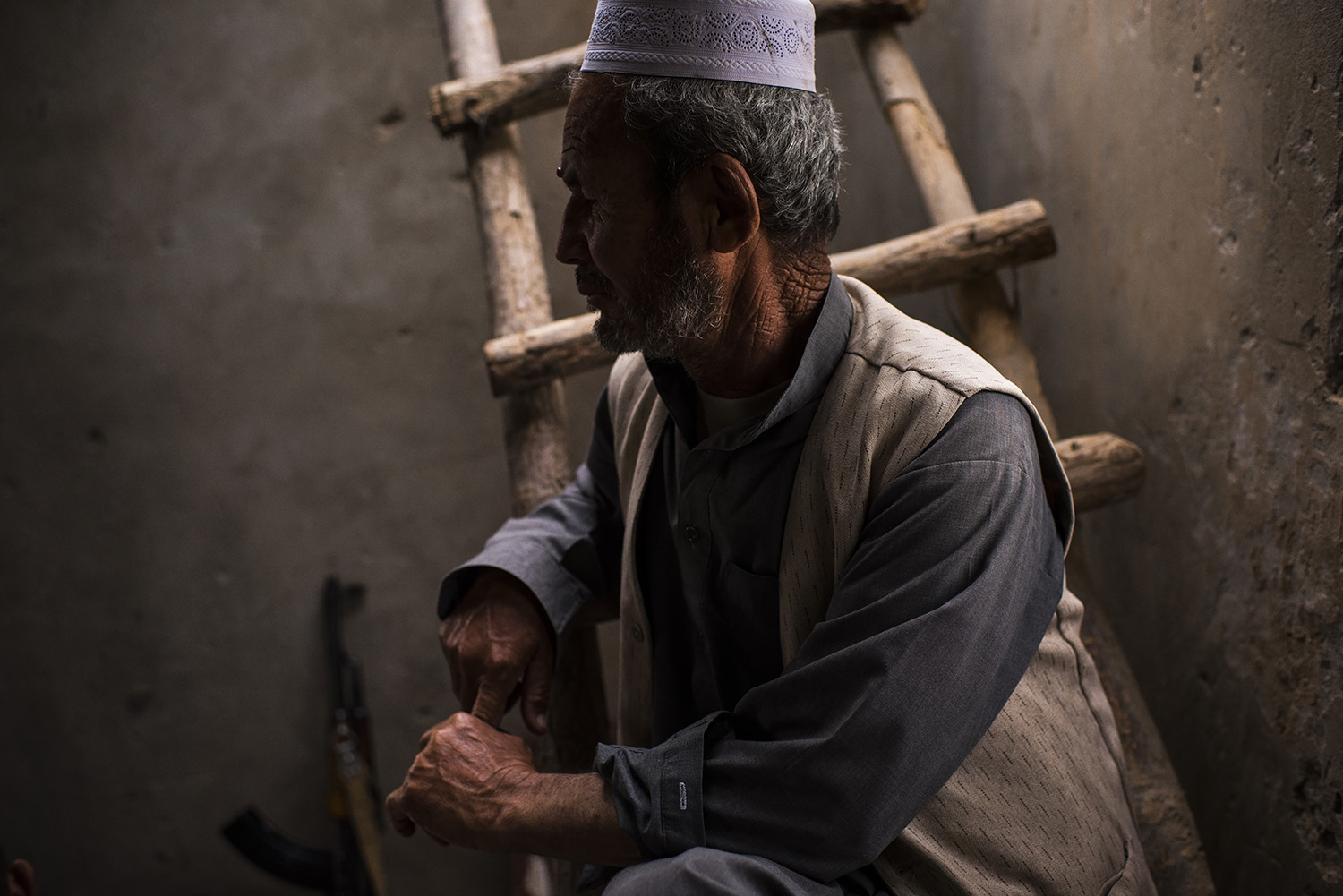 Ghulam Sakhi inside an ALP checkpoint from which Taliban flags could be seen planted in fields a couple of hundred yards away, in March 2016. Andrew Quilty for Foreign Policy

In a one-line post on its website, the Taliban claimed responsibility for Ghulam Sakhi’s killing. His sons buried him before noon.