Just a week before yet another close general election, Israeli Prime Minister Benjamin Netanyahu has announced a plan to annex the Jordan Valley—a large chunk of the occupied West Bank—if his Likud party wins. During the previous election campaign in April, Netanyahu also asserted that he would annex Jewish settlements in the West Bank—playing to his right-wing base and seeking to maximize votes for his Likud Party.

As in April, Netanyahu faces a tricky situation on Sept. 17—and afterward. Some polls project that Likud will win the most votes, but Netanyahu’s various opponents, who together are poised to win more than the 61 seats needed for a Knesset majority according to recent polling, could frustrate his ability to form a coalition. His looming indictment on corruption charges could also complicate his prospects of remaining prime minister, as Joshua Mitnick writes for FP. Earlier this year, Netanyahu chose to dissolve the government—forcing this month’s elections—rather than let Benny Gantz’s Blue and White party form a coalition.

How is the United States involved? Netanyahu said the broader annexation of all settlements in the West Bank would require “maximum coordination” with the United States. The administration of U.S. President Donald Trump is expected to unveil its Israeli-Palestinian peace plan after the election, and asserted on Tuesday that its position on Israel and the occupied territories had not changed.

How will the region react? Netanyahu’s announcement—widely seen as a bid to outmaneuver the far-right Otzma Yehudit party—has not provoked outrage in the Arab world. That’s likely because of Trump’s previous endorsements of Israel’s moves in disputed territory. It’s also in part because political shifts in the Middle East means that the Palestinian cause is no longer at the top of Arab countries’ agendas, the New York Times notes.

What does Bolton’s departure mean for U.S. policy? U.S. President Donald Trump fired National Security Advisor John Bolton via Twitter on Tuesday, bringing an end to his 17-month tenure in which he often argued with other officials over key policies. Bolton only lasted 520 days in the job—a longer stint than his Trump administration predecessors. “I disagreed strongly with many of his suggestions, as did others in the Administration,” Trump tweeted. His departure will certainly destabilize the president’s foreign-policy team, FP reports.

It also comes just before the U.N. General Assembly in New York. Secretary of State Mike Pompeo announced in a news briefing on Tuesday that Trump could meet with Iranian President Hassan Rouhani at the meeting later this month—with “no preconditions.” Bolton was a key part of the “maximum-pressure” campaign against Iran, and while his departure certainly removes an obstacle to talks between the United States and Iran, it doesn’t mean they are likely, officials say.

Trudeau launches election campaign. Today, Canadian Prime Minister Justin Trudeau will formally kick off the campaign for the country’s national election next month. Polls predict that the race will be close, and neither of the two main parties—Trudeau’s Liberals and the Conservative party—are projected to take enough seats to win a majority. That means the next Parliament could be more divided than the current one, threatening Trudeau’s left-leaning agenda. The election will take place on Oct. 21.

South Korea files complaint over Japan trade restrictions. South Korea will file a complaint with the World Trade Organization (WTO) today over the export controls Japan imposed in July on materials needed for computer chips and displays for computers, smartphones, and TVs. The trade dispute follows a South Korean court ruling that Japanese companies should pay reparations to South Koreans forced into labor during World War II. Today’s complaint marks the first step in a settlement process through the WTO.

Rwanda’s refugee deal. Rwanda and the African Union finalized an agreement on Tuesday for Rwanda to take in hundreds of refugees and asylum seekers stranded in detention centers at the center of the conflict in Libya. The first group of 500 people from Somalia, Eritrea, and Sudan, will arrive later this week. Their cases will be handled by the U.N. refugee agency, and they could be resettled in third countries. Rwanda already hosts around 150,000 refugees.

Election interference in Britain. Facing a potential election, authorities in Britain say the country isn’t prepared to resist foreign interference in the form of social media and disinformation campaigns. While politicians have discussed tightening political advertising laws, the policies haven’t been implemented. Experts allege that such campaigns played a role in the close 2016 Brexit referendum, when British voters decided to leave the European Union.

A crackdown on drug shipments. The administration of U.S. President Donald Trump is considering an executive order that would tighten restrictions on foreign shipments believed to contain the opioid fentanyl and counterfeit goods, Bloomberg reports. The move would likely target China, which Trump has accused of not adequately controlling shipments of the addictive drug amid the ongoing opioid crisis in the United States.

Flooding in Sudan. Floods have killed dozens and destroyed more than 100,000 homes in Sudan, which has only recently transitioned to a government with its first civilian prime minister, Abdallah Hamdok. The flood crisis presents a major challenge: The power-sharing coalition is so new that state governors haven’t yet been appointed and aid is slow.

Court battles over U.K. Parliament suspension. A day after Parliament was officially prorogued, a Scottish appeals court has ruled that the move was unlawful, overturning an earlier ruling. The U.K. Supreme Court will hear appeals on Sept. 17 concerning both the Scottish ruling and an English court’s decision that upheld the prorogation.

How Does Bolton’s Tenure Compare? 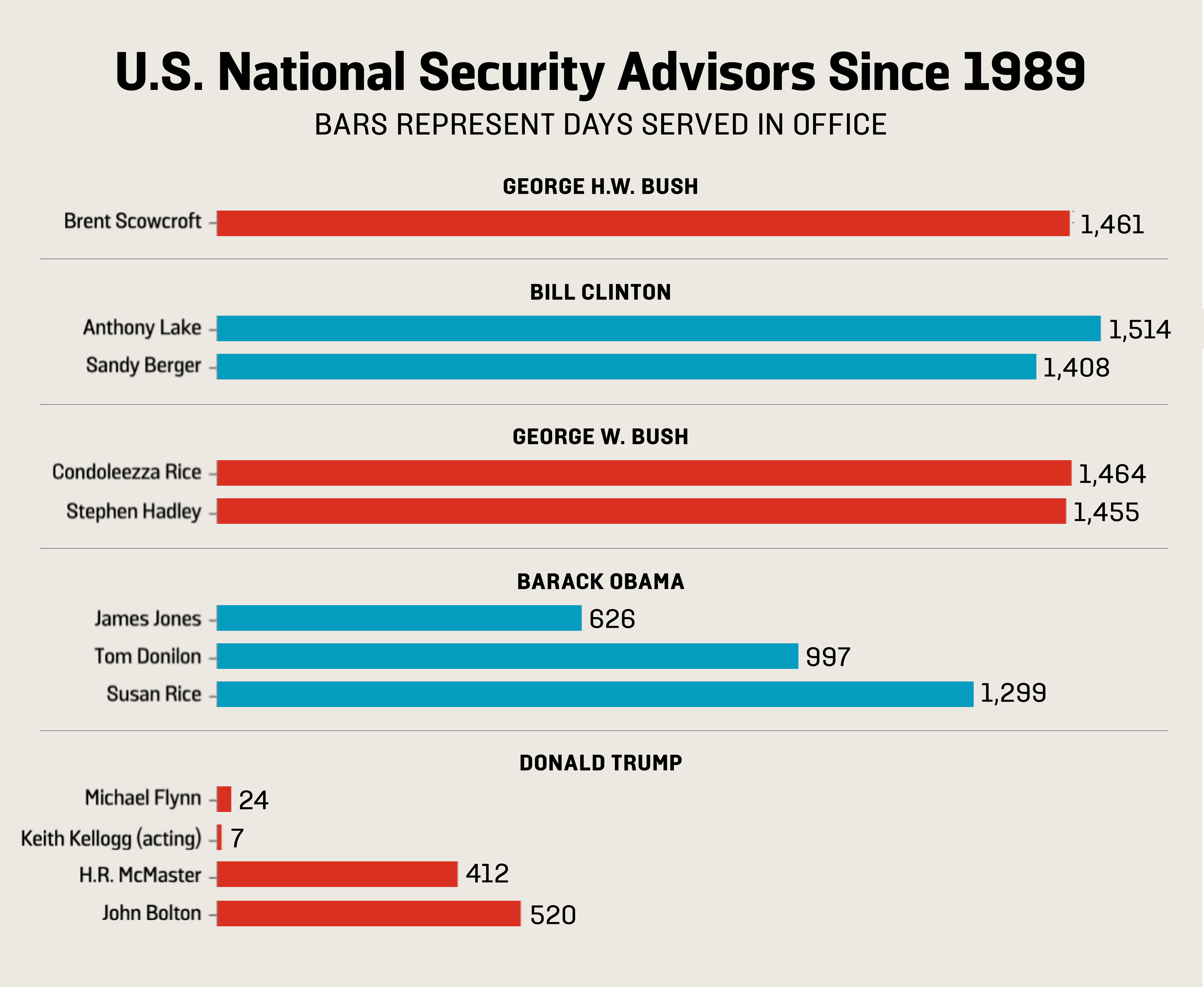 Since the administration of President George H.W. Bush, most national security advisors have tended to serve for an entire presidential term. That’s not the case under President Donald Trump, C.K. Hickey notes. Above, see how John Bolton’s 520 days in office stack up compared to his predecessors.

Hundreds of dogs in Norway have fallen ill with an unknown disease that has killed 26 pets, the New York Times reports. The gastrointestinal illness remains mysterious to veterinarians, and it remains unclear how it is spreading. In the meantime, authorities have urged citizens to keep their dogs from socializing.

After U.S. President Donald Trump abruptly put an end to the prospects of a negotiated settlement between the United States, the Afghan government, and the Taliban, Afghans are bracing for renewed violence. Few Afghans are more familiar with this cycle of fighting and reconciliation than those living in the village of Sayedabed, in Helmand province, which has switched between government and Taliban control six times since 2001. The slaying of a local elder there dampens optimism about Afghanistan’s future, Andrew Quilty reports for FP.

The largest Japanese population outside of Japan can be found in Brazil, where Japanese culture permeates what Brazilians watch, what they eat, and even what sports they play. Many Brazilians associate baseball more with Japan than with the United States. Sumo wrestling is now gaining popularity in the South American nation, too, as the Los Angeles Times recounts in this profile of a São Paulo sumo gym and its star wrestler. Nina Goldman, deputy copy editor