The Weapon Britain’s Parliament Can’t Do Without

The mace is a symbol of royal power—and sometimes of lawmakers’ anger.

The symbol of royal power in Britain’s Parliament is a weapon and not an especially sophisticated one. The mace, also known as a bludgeon, is a long club with a heavy lump on one end. Maces have been used ceremonially to denote power as far back as the Stone Age. William Shakespeare mentions the mace as part of the burdensome trappings of royalty in Henry V: “the balm, the scepter, and the ball / The sword, the mace, the crown imperial.”

Neither the House of Lords nor the House of Commons may sit without a mace present. It is the parliamentary MacGuffin: an object that is in and of itself functionless but without which the legislature cannot function.

Many parliaments and assemblies around the world, including that of the United States, have ceremonial maces, a tradition often traceable back to Westminster. The mace in the House of Commons is made of silver gilt. At 4 feet, 10 inches long and weighing 17.5 pounds, it could probably still do some damage. The stem is curled around with roses and thistles for England and Scotland. The emblems of each of the four nations of the United Kingdom are etched beneath a pearly crown. There is some confusion over this mace’s history: It was once believed to have been made for Oliver Cromwell (who rejected King Charles I’s mace as a “fool’s bauble”) during the Commonwealth period (1649-1660) and later modified with the symbols of a restored monarchy. More recent research indicates that it was probably just made—at considerable expense—for Charles II.

British parliamentarians behaved themselves around the mace for nearly three centuries after Cromwell until 1930, when a Labour member of Parliament, John Beckett, enraged by the suspension of a fellow left-winger, seized it and strode forth. “I decided … to take the weapon to one of the toilet rooms,” Beckett remembered later, “and place its head in one of the magnificent porcelain receptacles which I believed would conveniently accommodate it.” The mace was wrested from him by attendants before he could submit it to what British public schoolboys would call a “bog-washing.” 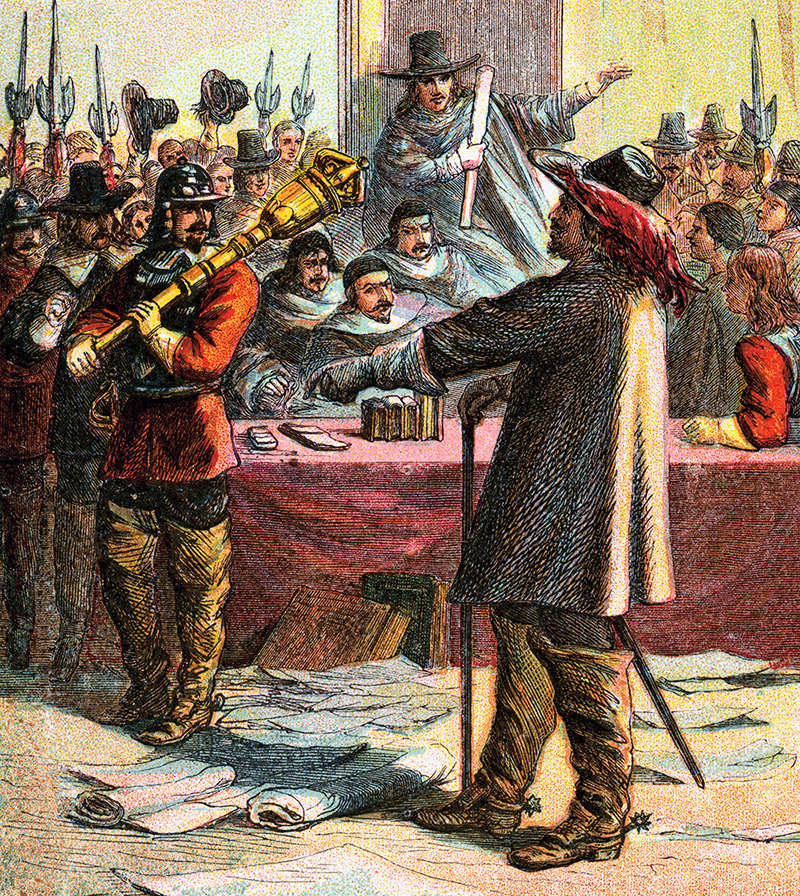 “Cromwell Turns Out Parliament,” a circa 1850 color plate. The Print Collector/Getty Images

Since then, several more members of Parliament have seized the mace in anger. In 1976, Conservative MP Michael Heseltine grabbed the mace and appeared to swing it at Labour members who were singing their party’s anthem, “The Red Flag.” “Against an unprecedented background of fisticuffs,” the Guardian reported, the Labour government had just defeated by one vote an attempt to prevent it from nationalizing the shipping industry. Scottish Labour MP Ron Brown seized and dropped the mace during a debate on supplementary benefit appeals in 1988. He paid around $2,700 to fix the damage: “I think I must be paying for the last hundred years of dents, including Heseltine,” he grumbled. Brown later appeared dancing with a mace in a video for the pop group Bananarama.

Labour MP John McDonnell, now shadow chancellor, was suspended from Parliament for five days in 2009 after snatching the mace in protest at his own government’s plans for a third runway at Heathrow Airport. Just last year, Labour MP Lloyd Russell-Moyle seized the mace in protest at then-Prime Minister Theresa May’s refusal to allow a vote on her Brexit deal. “I am aware that for the vast majority of people a gangly man in moleskin trousers holding a 5ft golden rod might look a bit odd,” Russell-Moyle wrote in the Guardian. “But I work in a very odd place, which rests heavily on symbol and ritual. … By ruling without the authority of the parliament, the Tories made the ceremonial mace into a tawdry ornament, devoid of meaning and value.”

For outsiders, the mace may seem like a fetish, but it remains for Parliament a powerful symbol of state and specifically royal authority. As Britain goes through the convulsions of leaving the European Union, both the Brexiteers and their opponents may seek to turn that back into a bludgeon.

This article appears in the Fall 2019 print issue.

Alex von Tunzelmann is a British author, screenwriter, and historian. Her most recent book is "Blood and Sand."