Why China’s Leaders Are Losing Sleep Over Pigs

For the Chinese middle class, pork is a key indicator of prosperity.

Good afternoon, and welcome to this week’s Foreign Policy China Brief. What we’ve got today: China’s rising pork prices add to economic concerns, a new anthem for the Hong Kong protesters, and slowing sales as the Chinese auto market shrinks

We welcome your feedback at newsletters@foreignpolicy.com. If you would like to receive this in your inbox, subscribe here.

Ahead of the 70th anniversary of the People’s Republic of China, two things are probably keeping Chinese President Xi Jinping up at night: the ongoing unrest in Hong Kong and rising pork prices. Out of the two, China’s pig herd—threatened by African swine fever—is the bigger worry. Data released this week shows that pork prices have soared by 46.7 percent year on year, leading to steep inflation.

That’s prompted an official circular from the State Council—an indicator of real concern at the top—urging provincial leaders to take steps to boost large-scale hog farming. While the Communist Party propaganda machine has been largely effective at shaping mainland public opinion about the protests in Hong Kong, it’s a tougher challenge to explain rising bills at the supermarket.

Is swine fever still spreading? African swine fever devastated Chinese livestock earlier this year and has since spread to countries across Asia. (The Philippines is the latest to record new cases.) While official reports indicate that a third of China’s herd has been culled, insiders privately say that it could be as much as half.

Despite the mass slaughters, the disease may still be spreading in China: Many farmers have simply been dumping dead pigs to avoid slaughtering costs. In March, Chinese police announced the arrests (link in Chinese) of more than a thousand people on pig-related crimes such as concealing infection and selling diseased swine. This week’s state circular announces subsidies for properly butchering infected herds.

Why it matters. Pork consumption is the best indicator of Chinese prosperity: It’s not cheap enough to be a staple for all, but it’s easily within reach of middle-class households. At a time when the public is already worried about an economic slowdown, the rising prices are especially painful. And with the pork supply pinched and farmers unable to restock their herds, the problem could continue for years. Normally, the pork shortage would be a potential bonanza for U.S. farmers, but China has said it will stop buying American agricultural products amid the ongoing trade war.

Hong Kong’s anthem. Violent clashes between protesters and police are becoming less common in Hong Kong, but the activists’ sense of independence—and hostility toward Beijing—appears to have strengthened. The most remarkable manifestation of this is the sudden adoption of a new unofficial anthem, “Glory to Hong Kong”—a 19th-century-style ode to new nationalism with crowdsourced lyrics in Cantonese referencing battle, sacrifice, and revolution.

Composed by an anonymous musician, the anthem is still evolving into its final form. But it’s another sign that this movement could persist even if the current wave of protests dies down. And it hits another sensitive spot for Beijing’s leadership: Disrespect for China’s national anthem is criminalized in the mainland, and there have been attempts to introduce a similar law in Hong Kong.

Pacific reach? New Zealand opposition leader Simon Bridges is under fire this week after a visit to Beijing where he lavished praise on his host, the head of China’s Ministry of State Security. It’s not the first time he’s faced criticism over his vulnerability to Chinese influence: Bridges is already mired in scandal for hiding donations from Zhang Yikun, a New Zealand businessman with ties to the Chinese Communist Party.

Meanwhile in Australia, an article by Clive Hamilton, a prominent critic of Chinese influence, attacking Liberal Party MP Gladys Liu for her connections to the CCP is causing a stir, particularly after intelligence officials noted the Liberals had been warned about Liu’s ties.

Uighur executions. Once the president of Xinjiang University, the Uighur geographer Tashpolat Tiyip was made to disappear and then convicted in secret in 2017. His execution could now be imminent, Amnesty International reveals. Tiyip was once a successful member of Chinese society and praised by Chinese state media, and he is one of thousands of Uighur academics who seem to have been deliberately targeted in an attempt to destroy the intelligentsia.

Taiwanese businessman detained. A Taiwanese visitor, Lee Meng-chu, has been detained this week in southern China for sharing images of the Hong Kong protests online, sparking new protests in Taipei. Unless he is released quickly, expect his arrest to become another issue in January’s presidential elections in Taiwan.

World leaders convene in New York for the U.N. General Assembly later this month, and from Sept. 23 to 27, Foreign Policy will publish a one-week-only newsletter devoted to on-the-ground coverage and in-depth analysis of the goings-on at the 74th U.N. General Assembly. Sign up here for the U.N. Brief, written by FP’s Colum Lynch and Robbie Gramer.

iPhone frenzy. The launch of Apple’s newest iPhone will test sentiments toward the tech giant in mainland China. Apple has repeatedly been targeted by Chinese media, which favors domestic firms. But it’s also a huge investor in the Chinese market—and the iPhone is still a symbol of urban chic. Reaction online has been muted since Tuesday’s announcement, but expect long lines when it actually launches—even given the hefty surcharge for Chinese buyers.

Cloud pollution. While computing now seems weightless, the data in the cloud actually sits on a thrumming machine somewhere. These data centers require immense amounts of power and contribute around 3 to 5 percent of global carbon emissions—comparable to the emissions caused by air travel. China’s internet plays a big part in that: Its data centers emit an equivalent amount of emissions to that of 21 million cars on the road every year, according to a new Greenpeace report.

A trade war olive branch. The exclusion of a brief list of U.S. exports from China’s retaliatory tariffs is a small concession from Beijing to U.S. President Donald Trump, but it doesn’t include any big-ticket items, like soybeans. U.S. farmers are still losing money, though many still support Trump—not least because of large payouts from Washington.

A slump in the auto market. Auto sales have been declining for 14 months in China—an unprecedented slump, and another sign that the economy may be worse off than official figures represent. Sales for the first half of the year declined by 12 percent.

How Much is Hong Kong Worth? 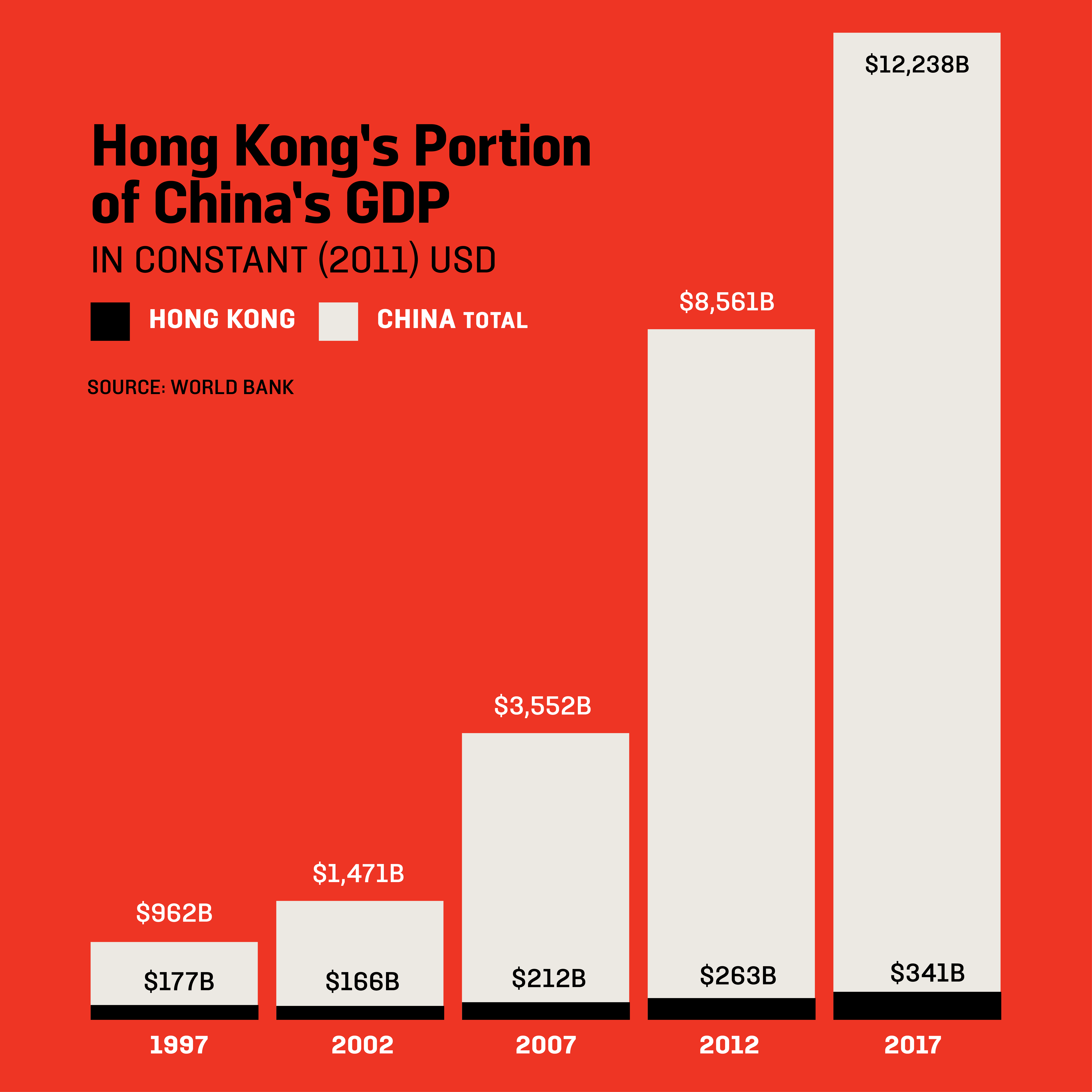 Hong Kong used to be economically critical for China. While the city is still important for its access to financial markets, it represents a smaller and smaller percentage of China’s wealth, as shown above. Don’t underestimate how much the Chinese elite is still invested in the city, though. While the wealth gap between Hong Kong and Shanghai is smaller than ever, Hong Kong is still an important way station for an essential project: getting money out of China.

Last week, we recommended the new documentary American Factory. This week, read this incisive take on it by Adam Minter, one of the best commentators on Chinese business—especially at the factory floor level. “The irony is that the work culture displayed in the film is increasingly obsolete in China itself,” Minter writes. “Thanks to rising expectations, Chinese factories can no longer operate with the impunity that allowed them to grow during China’s extraordinary economic expansion.”

This week, we open a question up to the readers: What actions by China would convince U.S. policymakers that it isn’t a threat to the American global order? And, conversely, what actions by the United States would convince China that Washington doesn’t want to contain it?

Send your answers to james.palmer@foreignpolicy.com. The interesting ones will be published in a future issue.

That’s it for this week. For more China coverage and other stories, visit ForeignPolicy.com. You can find older editions of China Brief here. If you enjoyed this in your inbox, subscribe to our other newsletters. Send any tips, comments, questions or corrections to newsletters@foreignpolicy.com.