The view from the ground.

Ordinary Afghans felt excluded from the talks and feared an empowered Taliban.

By Stefanie Glinski, a journalist covering conflicts and crises with a focus on Afghanistan and the wider Middle East.
September 12, 2019, 1:53 PM

KABUL—Sakhi Murad Sadar, his wife, and their two children were asleep in the family’s living room on Sept. 2 when a car bomb was detonated on the street nearby, ripping the house apart, smashing its windows, and almost killing the family.

The explosion, targeting an international residential and office compound across the street, killed at least 16 people and injured more than 100.

Yet despite a rise in violence in Afghanistan’s capital, Kabul—and across the country—Sadar, 28, said that while he wants the violence to stop, he’s glad a long-negotiated peace deal between the Taliban and the United States fell through.

KABUL—Sakhi Murad Sadar, his wife, and their two children were asleep in the family’s living room on Sept. 2 when a car bomb was detonated on the street nearby, ripping the house apart, smashing its windows, and almost killing the family.

The explosion, targeting an international residential and office compound across the street, killed at least 16 people and injured more than 100.

Yet despite a rise in violence in Afghanistan’s capital, Kabul—and across the country—Sadar, 28, said that while he wants the violence to stop, he’s glad a long-negotiated peace deal between the Taliban and the United States fell through.

His view is shared by many who see the deal as unfit for a country that has seen decades of war and is on the verge of another presidential election, scheduled for Sept. 28, with President Ashraf Ghani seeking a second five-year term.

While people across the country want peace, many fear a large-scale U.S. troop withdrawal could strengthen Taliban rule and increase violence.A lack of clarity has bothered many who say that the details of the deal were kept secret from almost the entire country, including the majority of the Afghan government, which had been sidelined during the talks.

A quick deal without negotiations with the Afghan government could see the Taliban become even more powerful or strengthen groups such as the Islamic State.

U.S. President Donald Trump unexpectedly canceled peace talks on Saturday, supposedly in response to a Taliban attack last week that killed 12 people, including a U.S. soldier. His Twitter announcement was followed by a declaration on Monday outside the White House, with Trump saying, “They are dead, they are dead,” referring to the negotiations—and by the firing of National Security Adviser John Bolton, an opponent of the talks.

Taliban spokesperson Zabihullah Mujahid reacted by saying that Trump’s decision will lead to more losses to the United States.

“This will further affect their credibility and expose their anti-peace stance to the world in a more clear way. Losses to lives and assets will increase,” he said in a statement.

In recent weeks the Taliban has stepped up attacks, often at the expense of civilians like Sadar, hoping to gain more leverage in talks as a result.

The price Sadar has paid is visible in the remains of his house. Sadar walks through his shattered home, broken glass covering the floor, the walls sprinkled with dried blood. A golden lamp dangles from a white painted ceiling that almost collapsed on the family.

“I don’t believe the Taliban will join and abide by a peace agreement anyway,” he said, looking out of a broken wooden window frame toward the mountains.

“The Taliban will continue to fight civilians and the government. There are killings every day. A peace agreement with the U.S. wouldn’t have made a difference, and it wasn’t what we needed,” he said, arguing that a total cessation of violence was needed, as well as direct talks between the Taliban and the government.

An eventual deal may still be on the table with the Taliban, who now control more territory than anytime since 2001 and continue to advance into new districts. They have been in negotiations with the United States for the past 10 months, with the last round of talks in Qatar’s capital, Doha, ending on Sept. 1, just a few days before Trump’s announcement.

“[Islamic State of Khorasan Province] is scared of a peace deal between the U.S. and the Taliban, because they are getting hammered on the battlefield from two sides: by the pro-government forces and by the Taliban,” said Graeme Smith, a consultant for the International Crisis Group.

But the decision to cancel the deal was welcomed by Afghanistan’s presidential palace, which had been sidelined during the talks.

“Trump’s decision is a genuine concern to question the commitment of the Taliban,” Ghani’s spokesperson Sediq Sediqi told Foreign Policy.

“We had our own concerns about any potential deal in which the government wasn’t included and where details weren’t shared.”

Anisa Murad, 45, who was a young adult when the Taliban took over in 1996 and who now lives with her husband and six children in eastern Kabul, was scared that any agreement could have meant far more power in the Taliban’s hands.

“We don’t trust them, and we were afraid,” she said of the militant group, standing next to her 11-year-old daughter, Salmah, in the family’s destroyed house, hit by the same explosion that left her neighbor Sadar’s house in rubble. 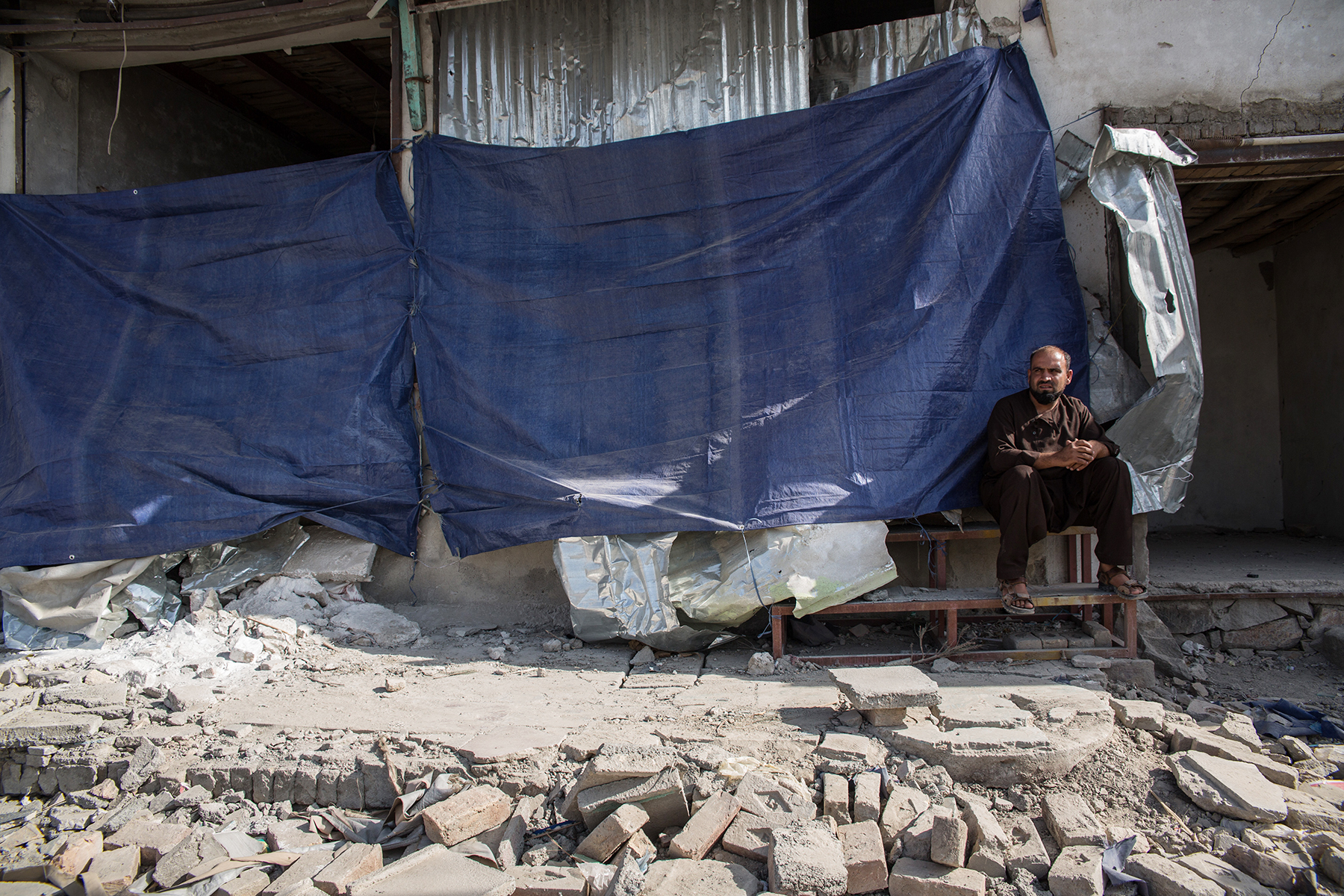 Sakhi Murad Sadar, 28, sits in front of his shop, which was hit by a car bomb that targeted an international residential and office compound, on Sept. 11. He says that right now, there can’t be peace with the Taliban. Stefanie Glinski for Foreign Policy

“I can’t believe we’re still alive. We can’t sleep at night for fear of more violence,” she said. “We want peace, but it can only come if the Taliban, the government, the U.S., and the neighboring countries agree.”

More than 4,000 civilians have been injured or killed in the war this year, according to a United Nations report.

“A deal without the government wouldn’t guarantee an end to the violence,” Sediqi said. “Instead, a peace process led by the Afghan government is necessary—and a road map for it came together during the Loya Jirga,” he added, referring to an assembly in May that brought together tribal elders and prominent Afghans to discuss potential peace talks with the Taliban.

“Trump’s reasoning doesn’t seem legit,” he told Foreign Policy by phone, referring to the claim by the U.S. president that the killing of an American soldier was the reason to call off the talks. “We worked for peace for all these months, so I’m not happy the talks were canceled. The U.S. wants to put pressure on us, but we will continue fighting foreign forces. It will become more dangerous for Americans, but this isn’t good for Afghans either. We will stage more attacks on both Afghan and U.S. forces.”

The capital is anticipating the violence. New checkpoints have gone up across Kabul, and the police have ramped up security. While the capital is as busy as usual, people’s fear of an uncertain future sits deep.

“I don’t know what to make of it,” said the independent peace activist Nargis Azaryun, referring to Trump’s declaration, “but I am happy at the same time. The Taliban has to show that they want peace—they have to stop terrorizing people. The move by the U.S. could pass a strong message to the Taliban, who was already claiming victory. Now we’ll have to wait and see what unfolds in the next months.”

But while people across Afghanistan are desperate for peace, many agree that a deal will have to be signed under the right circumstances and with the Afghan government involved.

Bacha Khan Mauladad, 28, of the People’s Peace Movement, a group of activists who have walked across 20 Afghan provinces advocating for an end to the fighting and a permanent solution to the war, said that all of Afghanistan—including the government—had to participate in talks.

“Even with monthslong U.S.-Taliban negotiations, it wasn’t clear what the U.S. and the Taliban wanted in detail. The deal was exclusive, and that’s why we’re happy it’s off the table,” he said, tense, but seemingly relieved.

The United States’ chief negotiator during the past months’ peace negotiations, Zalmay Khalilzad, has been recalled to Washington to discuss further steps.

“The last U.S.-Taliban peace agreement wouldn’t have brought a difference to us and to the ongoing violence,” Sadar said. “Now there will hopefully we another chance for us. A chance to make it better.”

NEW FOR SUBSCRIBERS: Want to read more on this topic or region? Click + to receive email alerts when new stories are published on U.S. Foreign Policy, South Asia, Afghanistan

Getting to ‘Yes’ Has Just Gotten a Lot Harder in Afghanistan

An abrupt end to a possible deal with the Taliban sticks the United States deeper in the quagmire.

We Lost the War in Afghanistan. Get Over It.

After 18 years of war, thousands of lives lost, and hundreds of billions of dollars squandered, the United States accomplished precisely nothing.