Repent for Your Frequent Flyer Miles!

Feeling guilty for the carbon burned on your last flight? The Germans have a word for that.

When Greta Thunberg departed Europe for New York on Aug. 14 in a zero-emissions racing yacht, she accelerated a global discussion of the morality of flying, which has become a particular fixation of the climate change movement. According to the German nonprofit Atmosfair, a single round-trip flight from London to New York generates 986 kilograms of carbon dioxide per person.

People everywhere who care about emissions often feel a particular kind of shame when they burn an annual household’s worth of carbon on a single trip. But Germans are among the few who have a word for it: Flugscham, or “flying shame.”

The term is actually an import: It comes from flygskam, which was coined in Thunberg’s native Sweden. Flygskam has enjoyed a tremendous career in Sweden—a popular Instagram account shames celebrities who fly too much, while train travelers flaunt their tagskryt, or “train pride,” on Facebook and Twitter. Flugscham’s reception has been more mixed, which is why the German term is ultimately more consequential than the Swedish original. Its ambivalences offer a more accurate view of the strengths and weaknesses of the current movement for climate justice.

When Fridays for Future, the movement of student protesters that Thunberg started, staged a protest at Stuttgart Airport this past July, it was met with shrugs. Flight passengers at the airport interviewed by Frankfurter Allgemeine Zeitung said they supported the movement, would support their own children protesting, and would rather take the train on future trips—if only there weren’t so many delays. The airport, meanwhile, applauded the political commitment of the protesters and called for increased investment in reducing airline emissions. German airline lobbyists are advocating for increased investment in rail systems and say they encourage travelers to use trains or buses for shorter trips. The Dutch airline KLM has even gone so far as to launch an advertising campaign encouraging passengers to avoid short-haul flights and instead seek other modes of transport.

The outsized attention paid to flying—and the increasing emotional dread associated with it—has political rather than ecological reasons.

The aviation industry’s position might seem surprising, but it’s likely in service of the sector’s bottom line. Airline executives have noticed how widely climate activism has been embraced in Germany. Politicians who have dared to criticize youth activists—such as the Free Democratic Party’s Christian Lindner and the Christian Democratic Union’s Annegret Kramp-Karrenbauer—have been roundly criticized on social media. Savvier political operators have followed German Chancellor Angela Merkel’s cue and praised the demonstrators for their political engagement while affirming their own commitment to fighting climate change. Even the reactionary Alternative for Germany, which has long rejected climate science, has considered changing its position at the request of its youth wing.

While powerful figures in politics and industry have generally encouraged the entanglement of moral judgment and consumer choice, others have been more skeptical. “Laws, not shame,” wrote the far-left Die Tageszeitung, arguing that climate change should be addressed through governmental action rather than personal choices. Die Zeit has expressed fears that Flugscham may spell the end of cosmopolitanism. Der Tagesspiegel has claimed that shame should be reserved for those responsible for the lamentable state of the German rail network. Der Spiegel, meanwhile, has pointed out that road traffic, not flying, is predominantly responsible for energy usage in the German transportation sector. In 2017, according to the German Environment Agency, of the 168 million tons of carbon dioxide produced by transportation in Germany, 162 million tons came from ground vehicles. 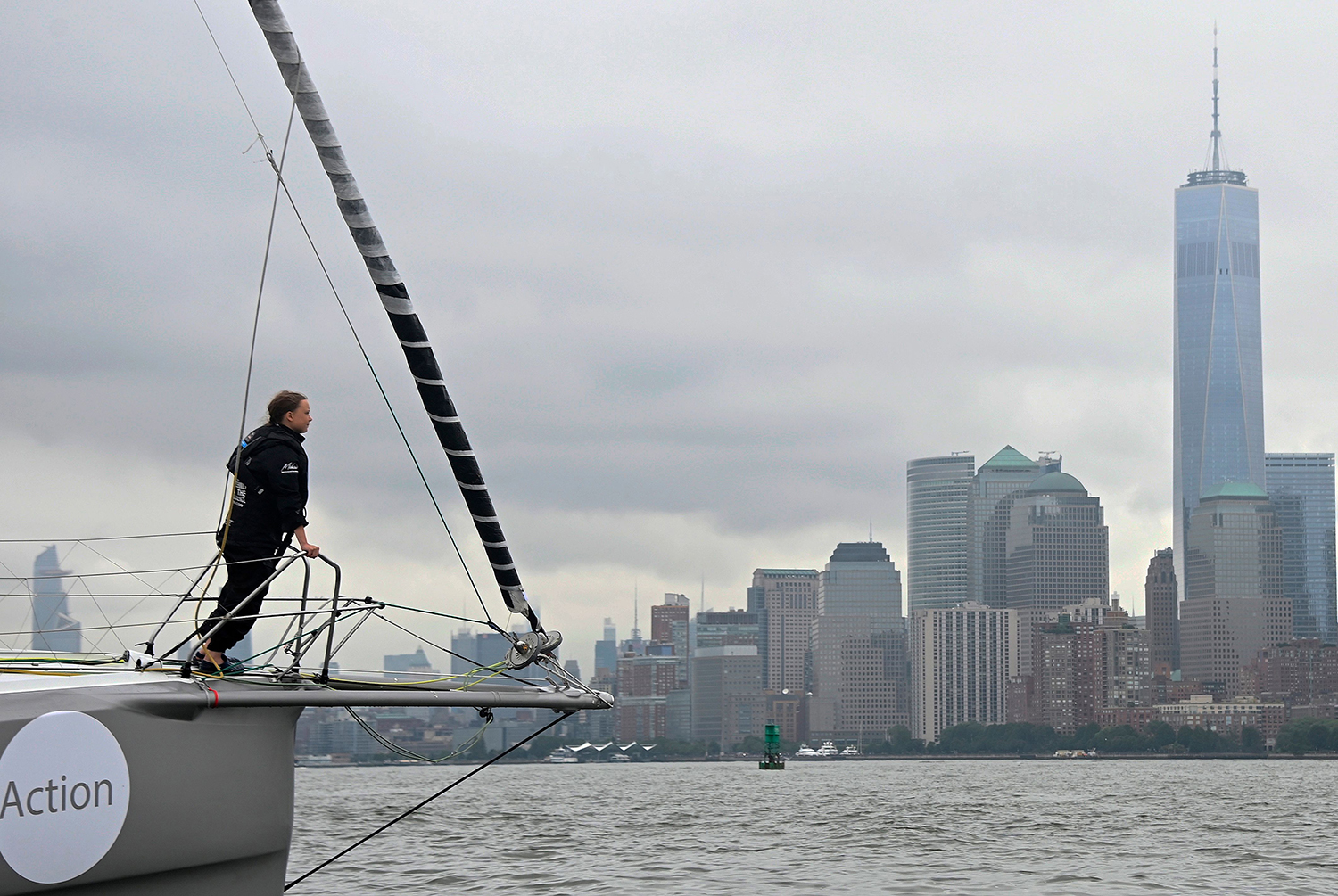 Greta Thunberg arrives in New York City on Aug. 28 after a 15-day sailboat trip across the Atlantic. JOHANNES EISELE/AFP/Getty Images

Though there are environmental reasons to think that the emissions produced by aircraft are especially harmful, the outsized attention paid to flying—and the increasing emotional dread associated with it—has political rather than ecological reasons. Even a slight reduction in the number of cars on the road would have a far greater impact on carbon dioxide emissions than eliminating domestic flights in Europe. But the widespread, and hugely disruptive, yellow vest protests in France serve as a clear demonstration of the dangers of government attempts to limit automobile use. In car-obsessed Germany, with its large manufacturing sector and beloved autobahn highway network, the outrage caused by any serious bid to limit automobile travel would likely be even more profound. Frequent flyers are a less problematic target.

They’re also a less powerful political actor than many of Germany’s other polluters. Plenty of other sources of carbon emissions could be regulated with even less impact on ordinary Germans. According to Der Spiegel, the energy sector produced 299 million tons of emissions in 2018—as much as transportation and manufacturing combined.

Yet meeting emissions targets in the energy sector became nearly impossible after Germans shuttered nuclear power plants in response to the 2011 Fukushima disaster. A more careful, more gradual shift away from nuclear power might well have helped Germany meet the ambitious targets it set in the 1990s, when it was a leader in the fight against global warming. Instead, Germany has now delayed the transition away from coal power until at least 2038, and the government has failed to intercede decisively against plans to mine coal in the Hambacher Forst—an ancient forest situated above a massive reserve of brown coal.

The attention paid to reducing emissions from flights is a distraction from more important issues. Project Drawdown, an overview of approaches to stopping or reversing climate change, ranks aviation 43rd. Yet it has certainly received much more media attention of late than refrigerant management, the project’s No. 1 approach to reducing carbon emissions.

The biggest problem with Flugscham, however, isn’t the Flug—it’s the Scham. Aviation does produce unnecessary emissions, and reducing them is certainly a laudable goal. But addressing the problem of climate change by shaming individual consumers is ultimately ineffectual. In Germany, since the word began to gain traction last year, airline ticket sales have gone up. Shame flyers too much, and they may invent the aeronautical equivalent of “rolling coal,” in which truck drivers remove environmental protections from their rigs in order to create clouds of black smoke, giving the finger to environmentalists in the process.

Moreover, the use of shame as a political tool, as the historian Ute Frevert argues in a recent book, has a terrible résumé. It’s found in war zones and totalitarian regimes, is used for racial and ethnic discrimination, and, perhaps above all else, it’s associated with misogyny. Not that long ago, women who slept with the so-called wrong people were publicly raped, had their heads shaved, were placed in the pillories, or were forced to wear the scarlet letter. This history should give everyone pause when activists, no matter how well-intentioned, try to shame their political opponents. The European far-right has already proved extremely adept at appropriating the tools of progressive organizers, and it’s not hard to imagine that shaming might reappear in uglier forms in the near future.

The dedication, the passion, and the creativity of the current generation of climate activists have drawn comparisons to the antiwar movement in the 1960s, but whereas that generation of activists insisted that the personal was always political, this generation has reduced a fundamentally political question to a moral issue. Flying less might reduce personal culpability for the climate crisis, but it’s pure narcissism to prioritize personal responsibility when collective action is so desperately needed. In the meantime, Flugscham is just one more opportunity to gesture at climate justice without following any real plan for achieving it. Thunberg can hold her head high knowing that she crossed the Atlantic without flying. But the two professional sailors who helped her cross the ocean? They took a commercial airliner back to Europe.

This story appears in the Fall 2019 print issue.

Peter Kuras is a writer, translator, and editor living in Berlin.