Plus: Netanyahu’s uncertain future, a Syria resolution at the U.N. Security Council, and the other stories we’re following today.

What Else Can the U.S. Sanction in Iran?

What Else Can the U.S. Sanction in Iran?

After the suspected Iranian attack on Saudi oil infrastructure over the weekend, U.S. President Donald Trump has announced plans to “substantially increase” sanctions on Iran. His administration is expected to reveal plans for the unspecified economic measures later this week. Iran continues to deny that it carried out the strikes, which were claimed by the Houthi rebels in Yemen.

But the announcement raises a question: What’s left to sanction? U.S. sanctions have already cut Iran off from the global financial system, pushing the country’s inflation rate above 40 percent. Still Iran has refused to negotiate. All that is left is a near-total economic blockade. Experts say this response could be seen as weak, Keith Johnson reports.

Rouhani meeting off the table. Amid the growing tensions with Iran, a meeting between Trump and Iranian President Hassan Rouhani at the U.N. General Assembly in New York next week looks even more unlikely. Iranian state media reported on Wednesday that Rouhani’s advance team hasn’t been granted visas to travel to the United States, jeopardizing Rouhani’s attendance at the event.

Netanyahu’s future in doubt. With Israel’s election results nearly final, Prime Minister Benjamin Netanyahu’s future looks even more in doubt, as his Likud party appears to have come in a close second to Benny Gantz’s Blue and White party and his right-wing bloc together won only 55 or 56 seats—well short of the 61 required to form a government.

Both Gantz and the newly minted kingmaker Avigdor Lieberman have pushed for a broader national unity coalition—in contrast to Netanyahu’s bloc, which is reliant upon far-right and ultra-Orthodox parties. Meanwhile, the election saw an unlikely winner: Israel’s coalition of small Arab parties, which will become the third-largest party in parliament, Joshua Mitnick reports for FP.

U.N. Security Council to vote on Syria truce. Today the U.N. Security Council will vote on two competing resolutions for a truce in northwest Syria: one from Russia and China and another from Kuwait, Germany, and Belgium. The region, including Idlib, is the last part of Syria still held by rebels. Russia seeks to include language that would exempt military offensives against blacklisted militant groups. The United States and others object, as Western states have accused both Russian and Syrian government forces of targeting civilians.

U.S. Afghanistan envoy subpoenaed by Congress. The U.S. special envoy for Afghanistan, Zalmay Khalilzad, has been subpoenaed to testify before Congress today after the State Department has refused previous requests for testimony from Khalilzad. The subpoena follows the abrupt cancellation of the peace talks with the Taliban, which Trump has said are now “dead.” It also comes as Pakistani Prime Minister Imran Khan seeks to push the United States to resume the negotiations.

Get ready for the U.N. General Assembly. Join FP Editor in Chief Jonathan Tepperman and senior U.N. correspondent Colum Lynch for a subscriber-only conference call on Sept. 19 at 10 a.m. ET as they preview the week ahead. And sign up for U.N. Brief for daily updates and insights from Lynch and staff writer Robbie Gramer during the week of Sept. 23-27.

Reproductive rights at the U.N. The Trump administration is trying to form a coalition of ultra-conservative governments to denounce efforts to promote sexual and reproductive health at a U.N. health summit next week, Colum Lynch reports. The United States has portrayed such programs as “anti-family” and “pro-abortion.” U.N. experts and lawmakers say the U.S. position endangers women’s health around the world.

Turkey’s refugee resettlement plan. Turkish President Recep Tayyip Erdogan suggested on Wednesday that the planned “safe zone” in northern Syria would be able to host 2 or 3 million of the Syrian refugees currently living in Turkey and Europe. The statement comes as both major parties in Turkey have responded to voters with tough talk on refugee repatriation, as Selim Sazak writes in FP.

A vaping ban in India. India has announced an executive order banning the production and sale of e-cigarettes. (It’s not yet clear if the rule includes the use of the products.) India, with more than 100 million smokers, had appeared to be a ripe market for e-cigarette companies. In the United States, the Trump administration last week said it would enact its own ban on flavored vaping products—a move that could reshape the U.S. market.

Europe’s war over arms exports. While the European Union has an arms export policy, countries often ignore the common controls and base their decisions on political or commercial pressure. This problem is particularly acute in the devastating war in Yemen, which has been exacerbated by the poorly coordinated policy, Beth Oppenheim argues in FP. 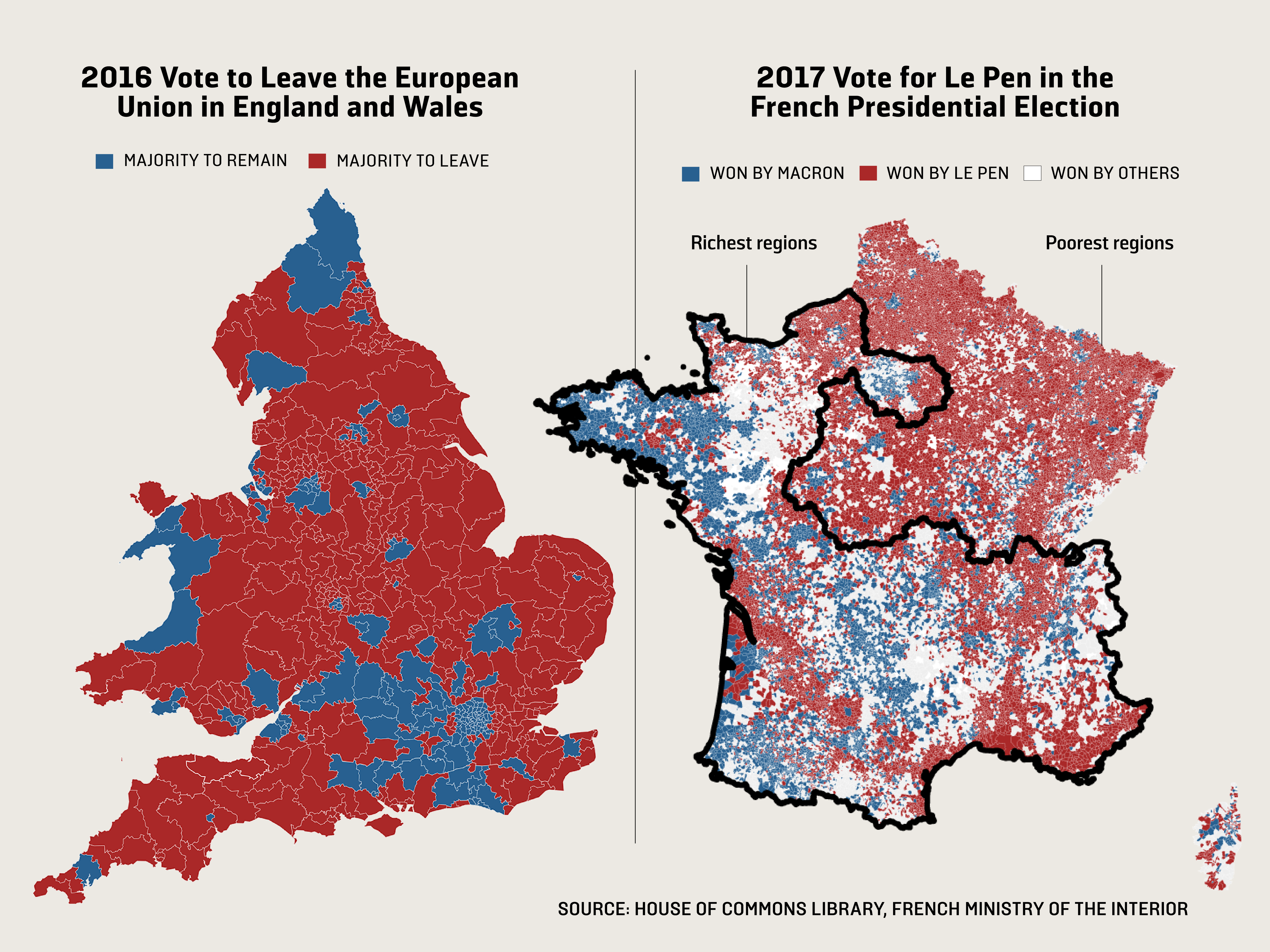 Across the West, economic inequality between regions with countries is fueling the rise of populism, Roberto Stefan Foa and Jonathan Wilmot argue in FP. This marks a change from previous generations. “If we are to understand the depth of populist anger, we must look to the economics of regional resentment,” they write. Above, regional divergence shows up in British and French elections in recent years.

The death of a giant panda in a Thailand zoo on Monday has prompted online outrage in China, with many debating the merits of Beijing’s panda loan program. Thai media have reported that the 19-year-old panda collapsed after eating bamboo, but those online have called into question the quality of care at the Chiang Mai facility.

Australia’s famous Great Ocean Road—which marks its 100th anniversary today—is under threat from climate change and a boom in tourism. Locals say the road, which runs through the state of Victoria, has seen an increase in traffic fueled in part by growing numbers of foreign tourists.

NEW FOR SUBSCRIBERS: Want to read more on this topic or region? Click + to receive email alerts when new stories are published on United States, Iran