One of the many dramatic facts about Darkness at Noon, Arthur Koestler’s 1941 novel on the evils of Stalinism, is that both the original manuscript Koestler wrote in German and the carbon copy of the original went missing in the chaos of World War II. The version the world came to know was an English translation that Koestler’s 21-year-old lover, Daphne Hardy, produced almost simultaneously while the two shared a small apartment in Paris in the run-up to the war; they would pull a curtain across the middle of the apartment every day after breakfast, and Koestler would write on one side while Hardy translated on the other. They finished the book and fled, days before Nazi troops marched on Paris. Koestler joined the French Foreign Legion, and Hardy went to London, where she had mailed her translation of the novel. She got the book published and titled it Darkness at Noon, which Koestler loved. He lived the rest of his life believing the English translation was the only version to survive the war.

So when a German graduate student, Matthias Wessel, stumbled on a copy of the original manuscript in an archive in the Zurich Central Library four years ago, even Koestler scholars were stunned. Darkness at Noon had gone on to become one of the most influential political novels of the 20th century, but no one had read the words as Koestler wrote them. Even the German edition that existed for 75 years had been a translation from the English.

Simon & Schuster is now publishing a new translation of the book—from the recovered German manuscript, back to English—by a seasoned translator, Philip Boehm. Koestler’s biographer Michael Scammell wrote in the introduction to the new translation that “[t]he prose is tighter, the dialogue clearer, the tone more ironic, and the intricacies of Marxist-Leninist dialectics more digestible.” 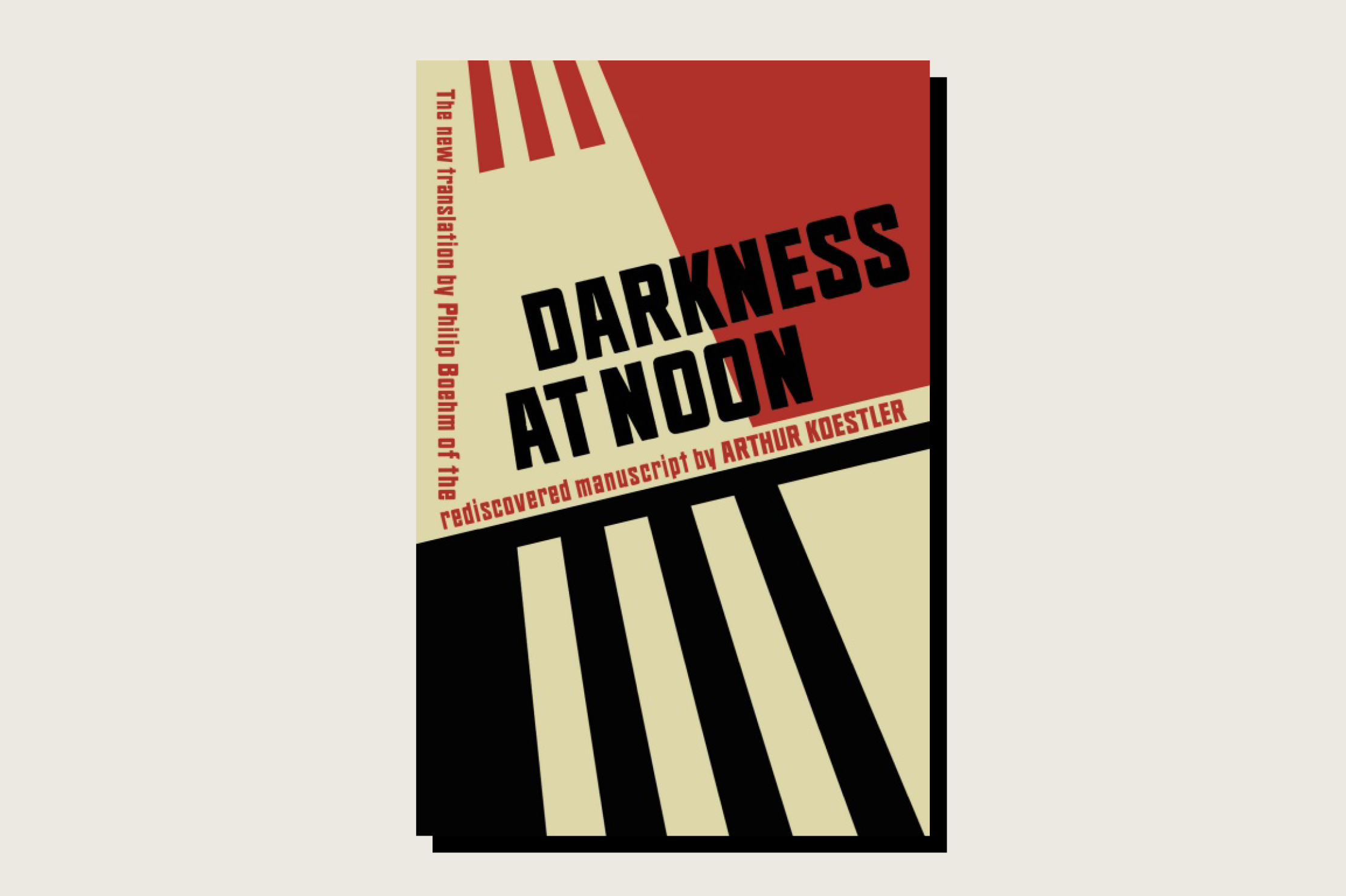 Degrees of digestibility are, of course, in the eye of the digester. Reading the new version as a Koestler fan but not a scholar, I didn’t notice many differences. Comparing them side by side, however, it’s clear that some are significant. In Hardy’s translation, the book’s first three sections are called “hearings.” Boehm, who lived behind the Iron Curtain for several years, used the word “interrogation.” But the larger question that looms over this new edition, appearing at this moment in history, with authoritarianism mutating and growing in countries all over the world, is: Does this anti-totalitarian novel from almost 80 years ago have something insightful to tell us today? Is it resonant in 2019?

Like George Orwell’s Nineteen Eighty-Four, Darkness at Noon has made a bit of a comeback in recent years, as people feel obliged to bone up on totalitarianism. Hannah Arendt can’t keep all the eyeballs forever. And bits and pieces of Darkness at Noon did speak to me across time, including his observations on the political impact of technology. The novel’s main character is Rubashov, a smart, tough, vain Old Bolshevik who’s in a prison cell trying to understand how the revolution he led, instead of making his countrymen’s lives better, has produced a murderous tyrant. He writes in his diary at one point that technological advances in history always lead to “a further complication of the economic framework.” His larger point becomes clear: Big technological leaps are so bewildering and painful that they can make societies vulnerable to demagogues. He was referring to the destabilizing power of the steam engine in the late 18th and early 19th centuries. But he could just as easily have been talking about the internet. Maybe Rubashov would have seen right away how Facebook could be used to surveil and go after anti-authoritarian activists, to spread lies and whip up rage.

Even so, he probably wouldn’t have acted differently. In his diary, as he warms to his technology argument, he writes with easy condescension that “every leap of technical progress brings with it a relative intellectual regression of the masses, a decline in their political maturity. At times it may take decades or even generations before the collective consciousness gradually catches up to the changed order and regains the capacity to govern itself.” His conclusion? “The terror, the falsehood, and the general debasement that are so evident are merely the visible and inevitable expression of the causal connection described above.”

Another aspect of the novel that felt relevant to today was Rubashov’s relationship to the unnamed demagogue leader in the story. Rubashov knows the man is dangerous but can’t bring himself to decide he’s wrong. Rubashov is caught in the mental trap of: Maybe the leader I serve, who I know is awful, is right, because he keeps winning.

Does this sound at all familiar?

But overall my answer to the question of the book’s relevance will be disappointing for admirers of Koestler generally and Darkness at Noon in particular. The book has limited value for people trying to understand the rise of a Viktor Orban or an Abdel Fattah al-Sisi, or even a Vladimir Putin. Koestler’s novel is, for the most part, specific to the to the place and time in which he wrote; it’s especially specific to the language of that time and place. One of the great things about Darkness at Noon is that Koestler, who had once been a fervent communist, knew the words and logic used by intellectuals who led the revolution and built the Soviet state. The not-great thing about the book is that such language is tedious, e.g., this passage: “The historical mistake of socialist theory was to believe that mass consciousness rises at a constant and consistent rate. This explains its helplessness in the face of the recent pendulum swings of history, and the ideological self-emasculation of the people.” I don’t read German, but I’d bet $5 that those sentences don’t skip off the tongue in any language. Reading them made me want to travel back in time and buy Daphne Hardy a drink.

At the time Darkness at Noon was published, the book’s passages about “the intricacies of Marxist-Leninist dialectics” were heady stuff for the novel’s primary target: members of the European intelligentsia who believed in the ideals of communism and had yet to face the horrors of Joseph Stalin’s crimes. The French translation of Darkness at Noon, published in 1946, sold 100,000 copies in its first year and 2 million copies over two years. People formed lines at the publisher’s office in Paris waiting for more. British Labor Party leader Michael Foot wrote, “For socialists especially, the experience [of reading Darkness at Noon] was indelible. I can recall reading it right through one night, horror-struck, overpowered, enthralled.”

The country depicted in the novel is never named—it’s just called “the country of the revolution”—but the book is clearly set in the Soviet Union. The story is an imagined behind-the-scenes look at Stalin’s show trials of the late 1930s. Rubashov has just been imprisoned. The Stalin character, like Big Brother in Nineteen Eighty-Four, is in pictures everywhere, staring down. Rubashov calls him “Number One,” though not to his face; it’s as an inside-joke nickname, rather than an official dystopian moniker. Rubashov fears Number One and admires him: “Amateur tyrants had forced their subjects to act on command; Number One had taught them to think on command.” In the system Number One has built, with the help of Rubashov and others, compassion is phony. Even curiosity is for suckers and losers.

Rubashov knows he is going to die and knows he will probably confess to treason and many other crimes he didn’t commit. The best parts of the book are about simply being a human in a prison cell, waiting for torture or execution: the daily reality of it, the rituals, and the flights of mind. The writing in these sections is crisp, and the reader can see and hear and feel the cell. Rubashov has conversations with a man in the next cell by a complex tapping system they both know, having been imprisoned before. Rubashov is visited by intense memories of the people he’s betrayed in the name of the revolution—a lover he allows to be executed, a party loyalist he drives to suicide, a young man he abandons to be picked up by the police and killed. Rubashov paces up and down the cell, never stepping on the cracks between the tiles, walking an endless, tiny loop: “Right-face at the door, left-face at the window—it was an old trick: if you didn’t change the direction of the turn you quickly became dizzy.” Writing those passages, Koestler drew on his experience during the civil war in Spain, where he spent three months in prison thinking he was about to be executed; he heard men around him being dragged off to be shot (all this is in another Koestler book, the memoir Dialogue with Death). Koestler also had a friend, Eva Striker, who was jailed in the Soviet Union for 16 months for supposedly plotting to assassinate Stalin. She told him about the tapping alphabet and other details.

I do think Koestler’s novel is worth reading (or rereading). It shows how easily a smart person can justify monstrous acts. It is a cautionary tale about what socialism can become in extreme form, and for an honest reader, it provides clarity on the differences between, say, the United States and the system Koestler wrote about. For instance, the totalitarianism of Darkness at Noon doesn’t look like a single-payer health care system—no matter what you think of that as a goal. As a contemporary tract, Darkness at Noon is a reminder that the Cold War ended decades ago, and we have new frightening battles to face.

Nancy Updike is a senior editor at This American Life.

We Are (Still) Living in an Orwellian World

Surveillance, drones, and never-ending wars have given new global resonance to the works of George Orwell.