Can India Give Up Coal?

As world leaders make bold speeches at the United Nations Climate Action Summit this week, the question is whether their countries can wean themselves off dirty sources of energy.

Welcome to Foreign Policy’s South Asia Brief, your weekly news and analysis from the region that includes India, Pakistan, Bangladesh, Afghanistan, Sri Lanka, Nepal, Bhutan, and the Maldives. If you would like to receive this in your inbox, sign up here.

The highlights this week: World leaders meet at the U.N. General Assembly, India and the United States work on a trade deal, Afghanistan votes, and Pakistan keeps Kashmir in the news.

Welcome to Foreign Policy’s South Asia Brief, your weekly news and analysis from the region that includes India, Pakistan, Bangladesh, Afghanistan, Sri Lanka, Nepal, Bhutan, and the Maldives. If you would like to receive this in your inbox, sign up here.

The highlights this week: World leaders meet at the U.N. General Assembly, India and the United States work on a trade deal, Afghanistan votes, and Pakistan keeps Kashmir in the news.

“The time for talking is over,” said Indian Prime Minister Narendra Modi in his address at the United Nations Climate Action Summit in New York on Monday. “The world needs to act now.”

Modi, it seems, heeded U.N. Secretary-General António Guterres’s warning to leaders to come to the summit not with beautiful speeches but with concrete plans for cutting greenhouse gas emissions. And the Swedish climate activist Greta Thunberg berated leaders in her speech: “We are in the beginning of a mass extinction, and all you can talk about is money and fairy tales of eternal economic growth. How dare you,” she said.

What plans were actually presented? The world’s two biggest carbon emitters were a disappointment: China made no new promises, and the United States stayed silent­ despite a surprise visit from President Donald Trump. From South Asia, Modi’s speech was the highlight. (Watch it here.) “Need—not greed—has been our guiding principle,” he said, speaking about how his government has given 150 million families clean cooking gas facilities. Modi also pledged that India would work toward a renewable energy target of more than 400 gigawatts by 2040, as well as implementing water conservation programs and expanding the use of electric vehicles. Next week, New Delhi is expected to announce a nationwide ban on plastic bags, cutlery, and straws.

India’s plans are not insubstantial. Spending on solar energy has exceeded that on coal plants across the country, with corporate giants like the Mahindra Group—with 200,000 employees globally—committing to a net-zero emissions goal. The question is whether it is enough, as India’s demand for energy rises alongside the expansion of its middle classes. Reuters reports that New Delhi is planning to invite bids from private companies to extract more coal from its vast natural reserves. (This move may also reduce a reliance on other countries: India’s imports of coal rose by 13 percent last year, worsening the country’s trade deficit.)

Coal dependence. Coal usage has steadily increased in South Asia’s main economy despite moves to boost renewable energy, as shown below. The reality is that the demand for energy in a region of 1.8 billion people is rising too quickly for solar, wind, and nuclear sources alone to satisfy. While it is difficult to deny the needs of consumers in emerging markets, it is also very expensive to jump straight to carbon-neutral energy products. For all the strong words from South Asia’s leaders, and the damage already caused by climate change, it’s difficult to imagine dirty fuels going away—at least not without massive political and social consequences.

It’s all happening at the U.N. India’s Modi, who has walked a fine line between closer ties with the United States and the pursuit of other allies, is expected to have a bilateral meeting with Trump on Tuesday. Teams from New Delhi and Washington have been working overtime trying to put together a deal clearing up some of the trade hurdles between the two countries, including India’s laws on data and e-commerce. The meeting comes a day after Trump met Pakistani Prime Minister Imran Khan. (Read a transcript of their press conference, where Trump once again offered to mediate on Kashmir—but only if India made a request that he get involved.)

Afghanistan votes. Later this week, Afghans go to the polls to elect a president. The run-up to the vote has been anything but calm. In August, an average of 74 people were killed every day in Afghanistan, according to the Independent, and most observers fear that the violence will worsen as election day approaches. While almost 20 candidates are running, Afghans are effectively choosing between incumbent President Ashraf Ghani and his coalition partner, Abdullah Abdullah—with whom he has feuded for most of the past five years. In the final days of campaigning, Ghani has taken a populist turn, but the vote may hinge on who Afghans believe can bring peace after talks between the United States and Taliban broke down last month.

Still under siege in Kashmir. While New Delhi wants to keep India-administered Kashmir an internal matter, Pakistan’s Khan will address the U.N. General Assembly on Friday, and he has vowed to use the platform to highlight the situation there. Meanwhile, thousands of people showed up outside Modi’s rally in Texas to protest the government’s actions. Back in Kashmir, the ongoing security clampdown has ensnared the region’s apple farmers, the Washington Post reports. Unable to organize and fearful of being caught in violence, farmers are letting this year’s harvest sit on the branch. Kashmir’s apple orchards are a $2 billion business, making up 60 percent of India’s apple haul.

Debt trap. The Maldives, which has a GDP of around $5.2 billion, may owe as much as $3 billion to China for Belt and Road projects. (Some assessments put the figure lower.) The island nation has been subject to a battle for influence between China and India, and the ruling Maldivian Democratic Party has raised fears that the flood of Chinese investment could doom the country. Chinese State Councilor Wang Yi has tried to ease such fears, suggesting last week that “there is absolutely no so-called ‘debt trap.’ To say that is complete nonsense.” 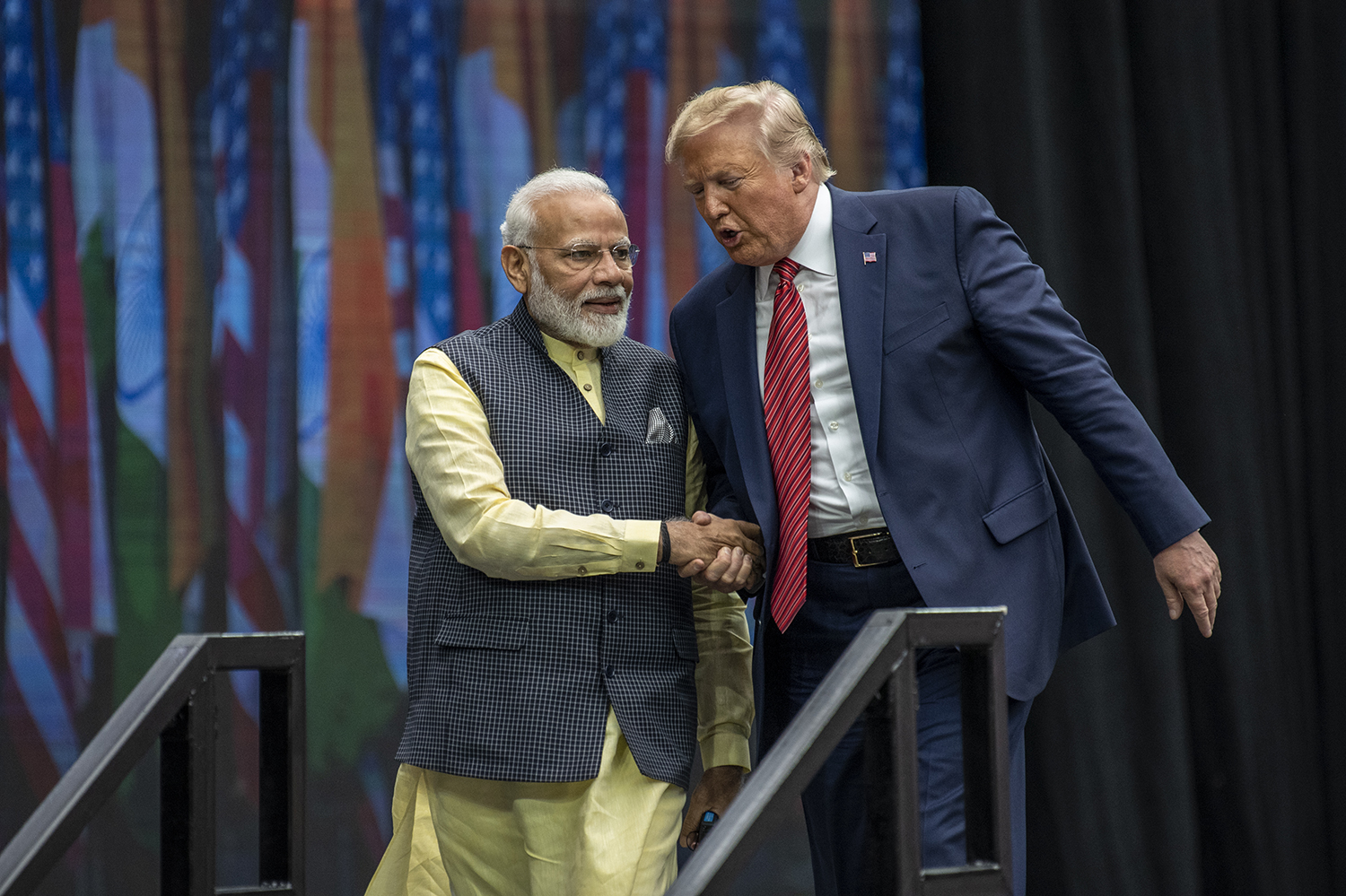 Modi comes to town. Over the weekend, the Indian prime minister touched down in Texas for a rally for tens of thousands of Indian Americans. Modi was accompanied onstage by Trump, whose presence reflected the increasingly close ties between India and the United States as well as the overlap in their nationalist, anti-elite, and majoritarian rhetoric. So friendly were the two men that Modi even said “abki baar, Trump sarkar,” or “this time, a Trump administration,” which raised eyebrows among those who understood it as an endorsement for another term for the U.S. president. Around 77 percent of Indian Americans voted Democrat in the 2016 presidential election.

According to the American Enterprise Institute’s China Global Investment Tracker, China’s total overseas investment and construction between 2004 and mid-2019 is $2 trillion. Of that, more than $140 billion is in South Asia. During this period, which South Asian country saw the lowest amount of Chinese investment and which the highest?

India’s corporate boost. Indian stocks recorded their highest one-day jump in a decade on Friday after the government cut its corporate tax rate from 30 percent to 22 percent. Modi called the cuts a “historic” move. Predictably, CEOs and corporate leaders cheered the decision: Biocon’s Kiran Mazumdar-Shaw called it the “best move ever.” But the question is how much of their savings will translate to economic growth or job creation. India’s unemployment is at its highest in a generation, and the cuts will hurt the country’s fiscal deficit.

If Beijing can do it. New Delhi is planning to set up what will become one of the world’s largest facial recognition systems—a boon for surveillance companies, Bloomberg reports. The new program would link to the country’s passport and fingerprint databases, and it has raised privacy concerns. Bidding opens next month.

Namaste, Alexa. In a long-overdue move, Amazon’s Alexa can now speak Hindi, the language of some 530 million people in India. Voice technology is particularly important in India: An estimated 266 million Indians are illiterate, and voice-activated technology remains the only way for them to access the internet.

Afghanistan’s other battle. As Afghan voters prepare to choose their next leader, it is worth revisiting this Foreign Policy photo essay from earlier this year. Air pollution killed more than 26,000 people in the country in 2017. The root cause, the photojournalist Ivan Flores writes, is “the burning of anything possible to get Afghans the energy and heat they need in harsh winters—including plastic, coal, and rubber.”

Kolkata’s last rickshaws. The streets of Kolkata once teemed with hand-pulled rickshaws, carting chickens and schoolkids alike. But now there are only a few hundred left, the job of rickshaw puller increasingly deemed barbaric. The Guardian documents the last rickshaws of Kolkata.

A) Bhutan and Pakistan.

For more reporting and coverage from across South Asia, visit ForeignPolicy.com. You can find older editions of South Asia Brief here. We welcome your feedback at newsletters@foreignpolicy.com. For more from FP, subscribe here or sign up for our other newsletters.

NEW FOR SUBSCRIBERS: Want to read more on this topic or region? Click + to receive email alerts when new stories are published on United Nations, India