Plus: The latest at UNGA, Maduro goes to Moscow, and Boris Johnson flies back to Britain to face Parliament.

The U.S. House of Representatives has launched a formal impeachment inquiry into President Donald Trump amid allegations that he asked a foreign leader to investigate former Vice President Joe Biden—a likely political opponent—ahead of the 2020 presidential election.

Until now, House Democrats have been divided over impeachment, but a whistleblower complaint about a July phone call between Trump and Ukrainian President Volodymyr Zelensky led to new demands for an inquiry—including from previous skeptics. It seems that Democrats, including House Speaker Nancy Pelosi, have concluded that the Ukraine allegations are clear enough for the general public to understand—unlike previous scandals.

The transcript. Trump has defended the conversation as appropriate and said he would release a full transcript of the phone call today. The whistleblower complaint reportedly involves other interactions between Trump and Zelensky besides the July conversation. The U.S. House Intelligence Committee Chairman, Adam Schiff, said that the whistleblower could testify before Congress this week.

What about Zelensky? Meanwhile, Trump is still scheduled to meet Zelensky on the sidelines of the U.N. General Assembly today—a meeting that will certainly be overshadowed by the looming inquiry. Elected this year, the actor-turned-President Zelensky is a novice politician. He has said that his conversations with Trump are “private and confidential,” CNN reports.

Will Trump be removed from office? The impeachment inquiry could eventually mean Trump leaves office, but it’s unlikely: After a trial in the House, he would have to be convicted in the Republican-held Senate—and it would require a two-thirds supermajority to oust him. The impeachment inquiry is more likely to have an effect on the 2020 election, though it could prove to be a political risk for Democrats.

Trump and Rouhani not likely to meet. Concerned about rising tensions, French President Emmanuel Macron has been pushing for in-person discussions at the U.N. General Assembly between Trump and Iranian President Hassan Rouhani. While both leaders remain in New York on Monday, the meeting is looking even less likely than before. Trump denounced Iran in his address on Tuesday, and Rouhani—who is under pressure from those who want to ditch the deal in Iran—said that he would allow some changes to the 2015 nuclear deal only if the United States lifted its sanctions.

Britain’s Parliament reconvenes. The U.K. House of Commons returns today after the country’s Supreme Court ruled that Prime Minister Boris Johnson’s suspension of Parliament was illegal. EU leaders cheered the decision, as they believe it makes a no-deal Brexit less likely. Johnson refuses to resign, but the ruling certainly complicates his plan to take Britain out of the European Union “do or die” by Oct. 31, Owen Matthews reports for FP. “With Parliament now officially back in session, Johnson has little room left to maneuver,” he writes.

Maduro goes to Moscow. Venezuelan President Nicolás Maduro will be in Moscow today to meet with Russian President Vladimir Putin—a key ally. While the two leaders are not planning to sign any agreements, it marks the first major international trip that Maduro has made this year. The meeting comes the day after pro-government lawmakers returned to Venezuela’s opposition-held National Assembly for the first time since 2017. After Maduro’s last visit to Russia, two nuclear-capable Russian bomber jets stopped in Venezuela, drawing U.S. ire.

Protests in Indonesia. On Tuesday, tens of thousands of students across Indonesia protested against a new criminal code that would penalize adultery and revise corruption laws. In Jakarta, the capital, police dispersed crowds with tear gas and water cannons. President Joko Widodo has delayed the parliament’s vote on the new criminal code until October.

The global postal system. The United Postal Union—which was set up in 1874 to ensure that mail could be delivered anywhere on earth—is holding an emergency meeting after Trump threatened to back out of the global postal system. The Trump administration has criticized the agency’s low delivery fees. The United States would be the first country to leave the 192-member organization, which the Union called a “nightmare” scenario that could lead to piles of undelivered mail.

China’s e-cigarette laws. China could introduce regulations around e-cigarettes next month amid a growing global backlash against the industry, state media reports. China is the world’s largest tobacco market, with more than 300 million smokers. India banned the sale and production of e-cigarettes last week.

America’s Love-Hate Relationship with the U.N. 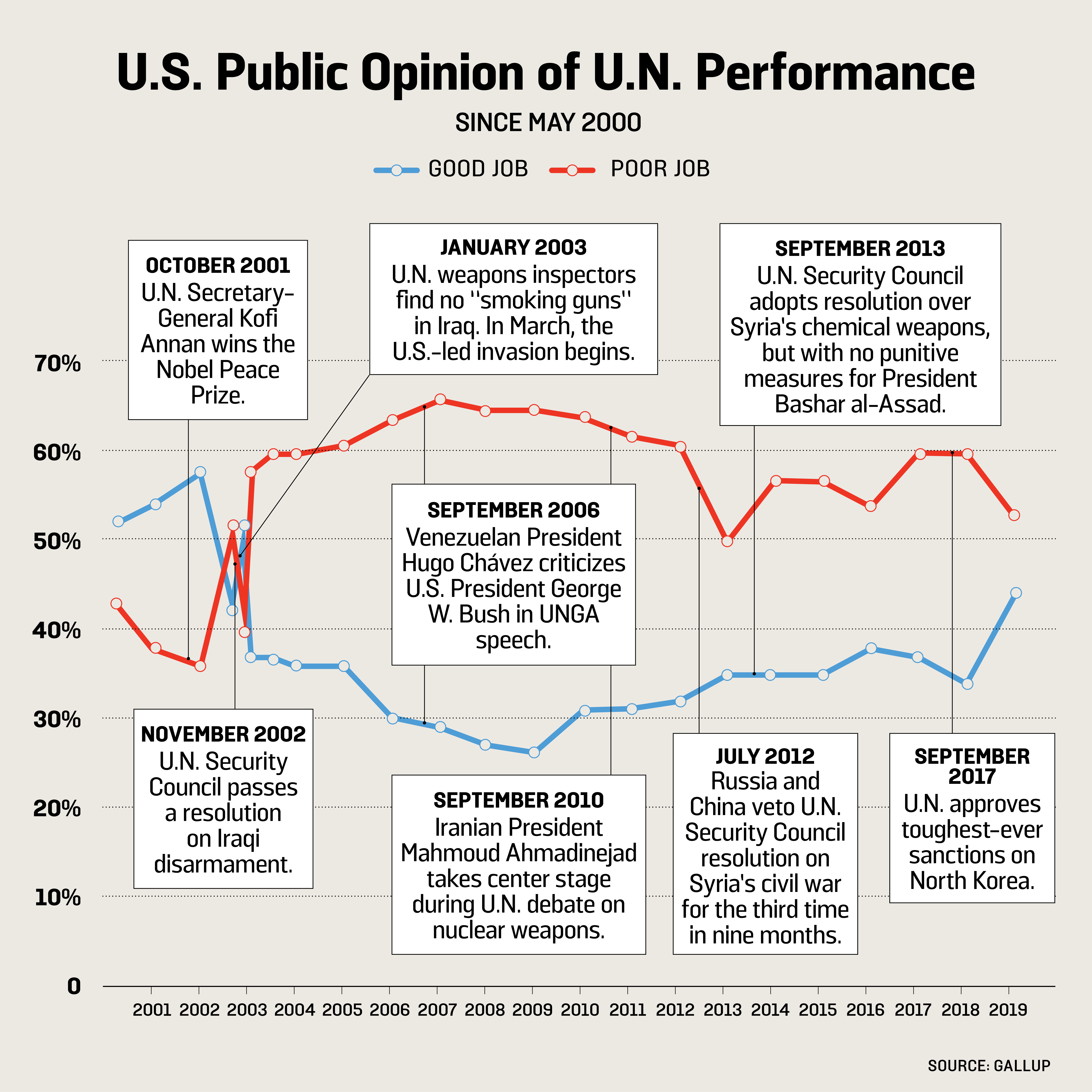 As world leaders convene for the U.N. General Assembly this week—and as U.S. leadership wanes—see how U.S. public opinion of the United Nations has changed over time. Since 2003, a majority of Americans believed the U.N. was underperforming, but in 2018 that trend began to reverse.

Sign up for FP’s pop-up U.N. Brief for daily on-the-ground coverage and analysis of the events at UNGA this week, from FP’s Colum Lynch and Robbie Gramer.

Next month, Pope Francis will host a three-week meeting of bishops from the Amazon, where a proposal to break with tradition and ordain married priests in the region will be discussed. A shortage of priests in indigenous communities means that 85 percent of the region’s villages can’t hold Mass, Reuters reports.