Why Doesn’t China Have Its Own Greta Thunberg?

There is little daily public concern about climate change in China, and combating it is seen as the state’s responsibility.

Good afternoon, and welcome to China Brief, Foreign Policy’s weekly round-up of news and analysis from the world’s most populous country. The highlights this week: muted climate hopes at the U.N. General Assembly, the death of an HIV whistleblower, and party controls at giant tech firms.

Good afternoon, and welcome to China Brief, Foreign Policy’s weekly round-up of news and analysis from the world’s most populous country. The highlights this week: muted climate hopes at the U.N. General Assembly, the death of an HIV whistleblower, and party controls at giant tech firms.

At the U.N. Climate Action Summit on Monday, China—the world’s biggest carbon emitter—poured cold water on the idea that it might propose more ambitious emissions reductions. (It wasn’t alone among leading polluters: The United States, Japan, and Australia have not offered any new commitments.)

Beijing may be ahead of its own emissions targets, but those focus on slowing emissions growth, not delivering actual reductions. That’s bad news for the world. China emits more carbon dioxide than Europe, Africa, and South America combined.

Growth problems. The Chinese argument has always been—with considerable justification—that the energy needs of a growing middle class of hundreds of millions of people make actual reductions impossible without leaving people trapped in poverty. That excuse may no longer work if climate change threatens the very cities the newly prosperous are living in. China’s east coast alone, with 600 million residents, is extremely vulnerable to rising sea levels. The country already struggles with a decline in arable land that could worsen as the climate changes. Aging dams like the Three Gorges Dam are under threat from landslides and seismic activity. The country’s last major dam collapse in 1975 killed 170,000 people, many through famine.

Public apathy. There is almost no daily public concern about climate change in China. The issue is fairly muted in Chinese-language media beyond coverage of Beijing’s own programs, and there is little individual concern about electricity usage or air travel. Climate change is overwhelmingly seen as a government responsibility, not a personal one. And as quality-of-life issues like air pollution become acute, the government has increasingly shut down local environmental groups. An activist like the Swedish teenager Greta Thunberg might be in prison in China.

Disasters forbidden. Depictions of disasters in Chinese cities—fictional or otherwise—are a big red line for China’s censors. In part, that’s because natural disasters like the 1976 Tangshan and 2008 Sichuan earthquakes, worsened by mismanagement and corruption, tested the stability of the Chinese Communist Party. Without being able to imagine disaster, it’s hard to grasp the scale of what the planet faces.

Sign up for FP’s pop-up U.N. Brief for daily on-the-ground coverage and analysis of the events at the U.N. General Assembly this week, from FP’s Colum Lynch and Robbie Gramer.

Police brutality in Hong Kong. A video showing Hong Kong police officers beating a protester has stirred another round of public anger in the city. Trust in the police has collapsed. Before the ongoing democracy protests, 6.5 percent of people surveyed rated the police at zero out of 10 on a trustworthiness scale. Today, that figure is at nearly 50 percent. Rebuilding that trust—surely vital to the city’s future—is impossible until the authorities make some serious concessions, like independent inquiries into police abuse. Instead, the use of petty charges against protesters seems to be increasing.

Beijing prepares for Oct. 1. Ahead of the 70th anniversary of the founding of the People’s Republic of China, restrictions on daily life in the capital are increasing by the day, and the crackdown is more extensive than usual. Residents in the city center have been ordered to leave their homes if they are near the military parade route or forced to stay inside during practice sessions for security reasons. The 80-minute parade in Beijing will involve 15,000 military personnel and 160 aircraft.

HIV whistleblower dies. Shuping Wang, one of a group of doctors who exposed the extent of the HIV crisis in the Chinese countryside in the 1990s, has died in Salt Lake City, Utah, at the age of 59. While working as a virologist in Henan province, Wang discovered that contaminated blood was spreading HIV and hepatitis. As a result, she was assaulted, persecuted, and eventually forced into exile, as was another whistleblower, Gao Yaojie. The media eventually covered the scandal, saving tens of thousands of lives.

A flag-raising film. Chinese authorities are heavily promoting the Hong Kong segment of upcoming Oct. 1 propaganda flick My People, My Country. In contrast to genuinely popular nationalistic action films like 2017’s Wolf Warrior 2, propaganda films are often kept in theaters by compulsory turnout: Even the most patriotic audience doesn’t want to pay for the content it gets for free on television.

Pork industry watch. With renewed U.S.-China trade talks on the horizon, pig futures in the United States are booming in anticipation of increased Chinese demand due to the African swine fever outbreak. In China, tech firms have invested in the pork sector for years. Now, the gaming behemoth NetEase is again expanding its pig farming operations. The old line was that every Chinese firm was really a real estate company. By 2020, perhaps every Chinese tech guru will really be a pig farmer.

Unicorn shortage. Amid the economic slowdown, there are funding problems even for China’s shiniest new tech firms. SenseTime, an artificial intelligence start-up valued at $7.5 billion, is now having trouble finding new capital as the trade war continues to scare off U.S. investors. Firms tied to the Chinese surveillance state, like SenseTime, may face more specific challenges.

Business controls in Hangzhou. The Hangzhou city government has sent representatives to work with 100 private companies, including the e-commerce giant Alibaba, that are headquartered in the southern city. The move is part of an ongoing push to reassert the party-state’s power over the private sector, despite promises from President Xi Jinping to entrepreneurs that their rights would be protected.

Electric cars flop. China’s main electric vehicle manufacturer, NIO, reported massive losses this week. While that’s partially the fault of the general slowdown in the automobile sector, it’s also the result of a heavily subsidized electric car industry that may have become a bubble. The government sunk $60 billion over the last decade into the industry, prompting over 100 companies to join in. Electric vehicles may still be the future, but expect a market cull soon. 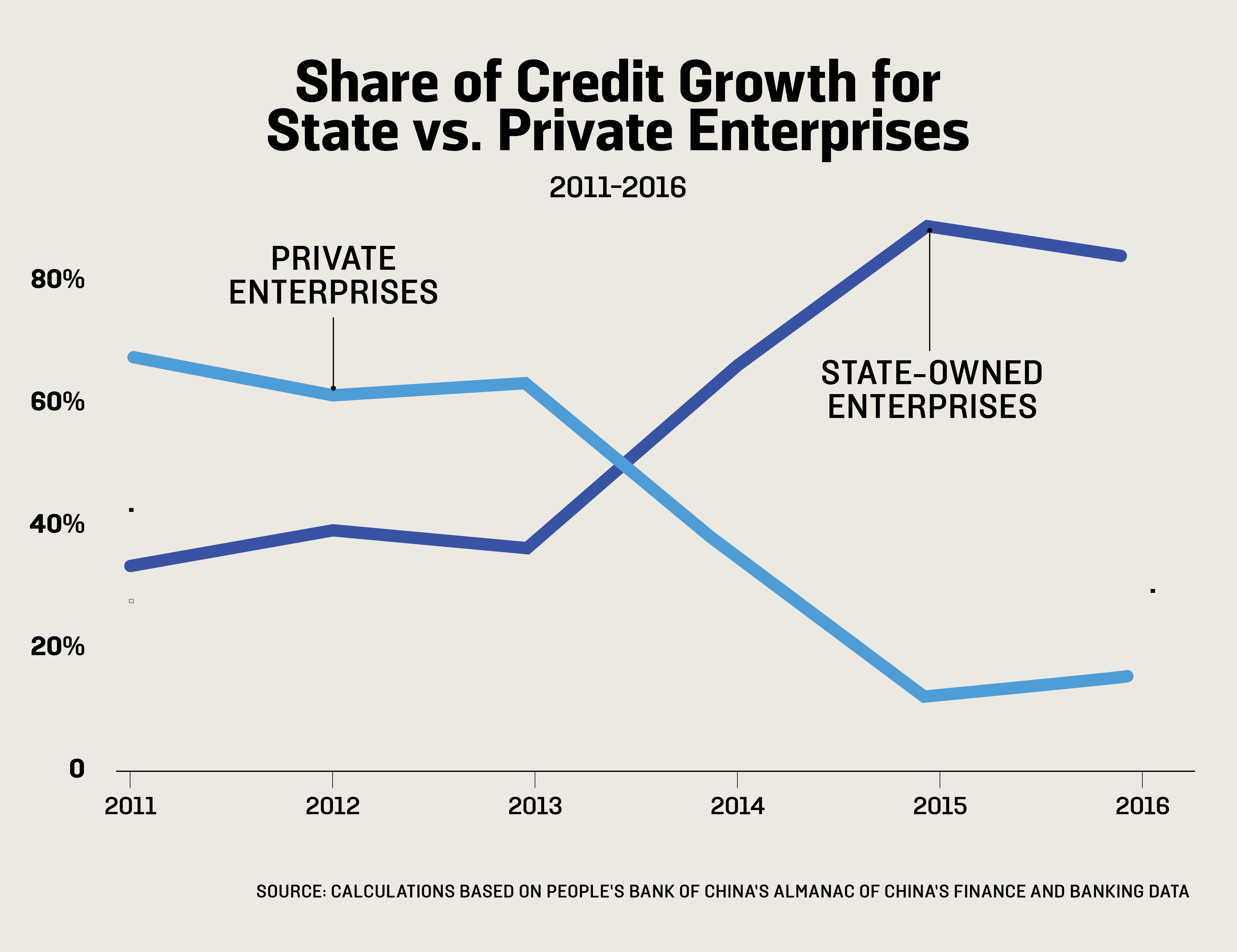 Although China constantly promises reform in its state-owned enterprises (SOEs), they have been eating up a greater share of resources than ever. Since 2013, the share of credit growth of SOEs has jumped, while the private sector has been left out in the cold. While there has been a correction effort since 2016, SOEs still hold vast amounts of debt.

“Are Chinese and Western Perspectives Incompatible in Our Post-Truth Times?” by Noah Lachs, SupChina

This piece is a depressing insight into a flagship U.S.-China education project, the Schwarzman Scholars program at Tsinghua University, by one of its students, Noah Lachs. Lachs depicts Chinese students as unwilling to accept any criticism of the system, aggressively defending human rights abuses in Xinjiang, and increasingly hostile to foreign ideas.

That’s perhaps unsurprising at Tsinghua, which is one of the most heavily monitored universities in China, and it’s always hard to tell how much is real—with performative nationalism playing a role in career advancement. But for advocates of programs like Schwarzman Scholars, which aspires to cross-cultural exchange, the compromises made are becoming harder to defend.

NEW FOR SUBSCRIBERS: Want to read more on this topic or region? Click + to receive email alerts when new stories are published on Environment, China