KABUL—Five years ago, during Afghanistan’s last presidential election, Farhad Sharif narrowly escaped death when he decided at the last minute not to join his uncle at a polling station in rural Nangarhar province.

Sharif, 24, missed a mortar being fired into a crowd of voters that killed his uncle and left many injured. Back then, at age 19, he was just old enough to cast his ballot. This year, he wants to give it another try, but he’s afraid things could be even more dangerous. “It’s our country and our future, so I want to participate, but it could be a big sacrifice,” Sharif said from his home in Ahmed Shah Baba Mena, an eastern suburb of Kabul.

Like Sharif, many Afghans are poised hesitantly at their front doors, weighing the conflicting demands of national duty and personal safety as Saturday’s presidential election approaches, with current President Ashraf Ghani and the republic’s chief executive, Abdullah Abdullah, as the top contenders.

The Afghan National Army counted 690 attacks during the April 2014 presidential election—a spike in violence even though a majority of attacks were considered small-scale. But this year the Taliban are far more powerful and threatening violence with peace talks on hold. 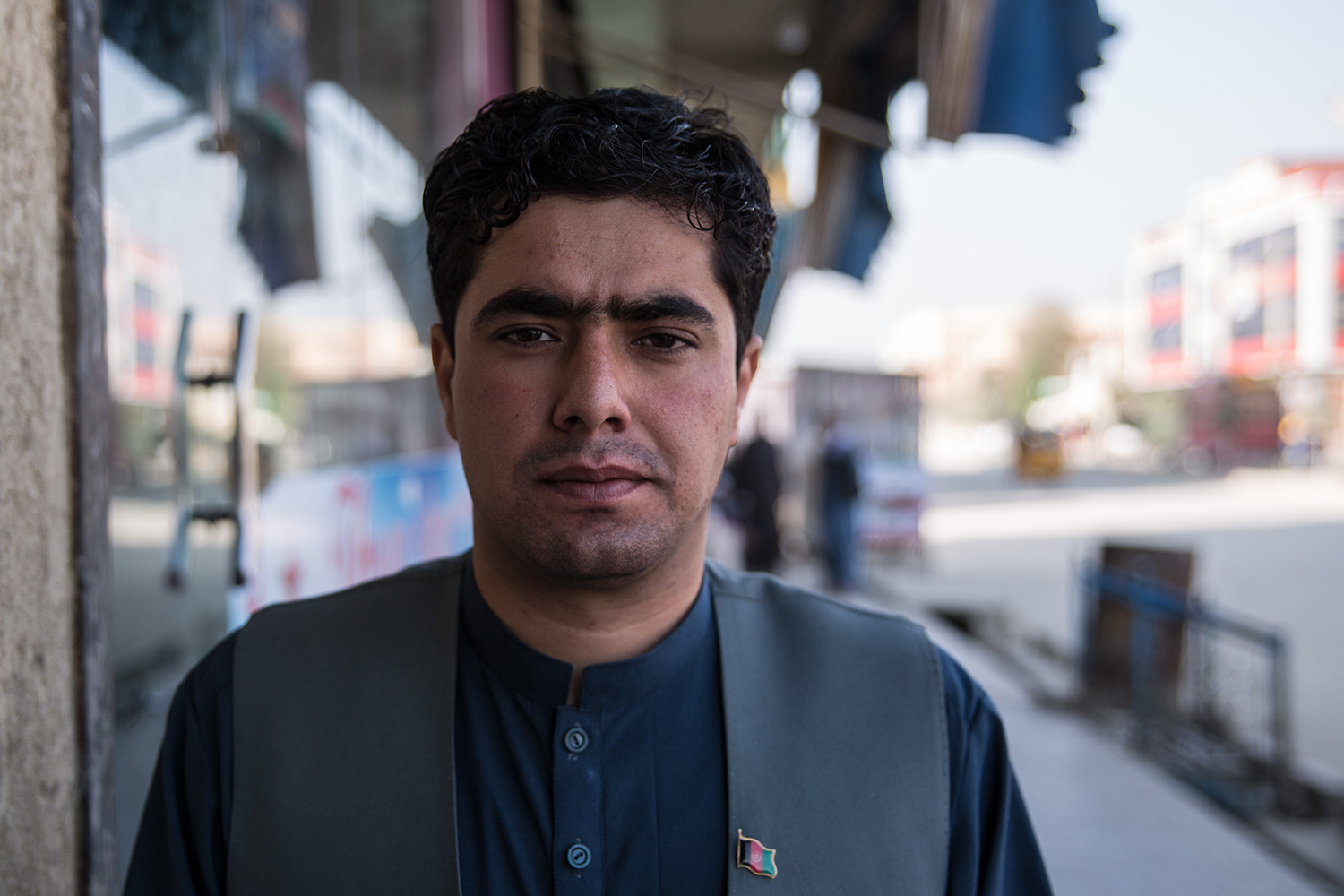 Farhad Sharif, 24, photographed in Kabul on Sept. 24. His uncle was killed in an attack during Afghanistan’s last presidential election in 2014 but says he will vote this year nonetheless. Stefanie Glinski for Foreign Policy

“It’s likely going to be more violent than in past years, unless any sudden major thing persuades the Taliban to not disrupt Saturday’s election,” said Ali Yawar Adili, an election expert working with Afghanistan Analysts Network. A United Nations observer group seemed to agree, saying: “As polling day nears, there have been increased reports of intimidation of eligible voters by insurgents threatening retaliation for persons involving themselves in the election.”

“It’s is chaotic and dangerous—and it’s gotten worse. I’m not going to risk my life to vote.”

“Afghanistan has become like a jungle. It’s chaotic and dangerous—and it’s gotten worse,” said Ramin Rahmini, a taxi driver in central Kabul. “I’m not going to risk my life to vote. We might not have all the riches and innovations that you see in Europe or America. There, people turn 90—even older. Here, you’re celebrated if you make it to 60. But we’re all human. We just want to be alive.”

Afghanistan’s Defense Ministry says it has put extra measures in place to keep voters safe, but the population either worries or doesn’t believe in a fair, transparent, and fraud-free procedure.

“If we look at last year’s parliamentary elections, the majority of registered voters—almost two-thirds—didn’t turn up. With the Taliban already stating that they plan to attack polling stations, and with their additional threats to cut off electricity, we have reason to believe that this year’s turnout could be even lower,” Adili said. “People have lost confidence. There was a huge mismanagement last year, and many don’t trust the election bodies anymore.”

This year, an estimated 5,373 polling stations will likely be open throughout the country for the 9.6 million people who have registered to vote, according to the Independent Election Commission of Afghanistan, though several hundred stations might not open after all due to high risk. During the 2018 parliamentary elections, only 3.6 million people cast their votes. Results from the 34 provinces are to be announced by Oct. 19, with the final figures available by Nov. 7, though these tentative dates could change. The Education Ministry announced that all schools are to be closed from Thursday on, as several of them will be used as polling centers.

According to the election expert Nishank Motwani, who has monitored Afghanistan’s three previous elections, people are more cynical this year. “They believe their votes are inconsequential to the voting results due to expectations of electoral fraud,” he said. 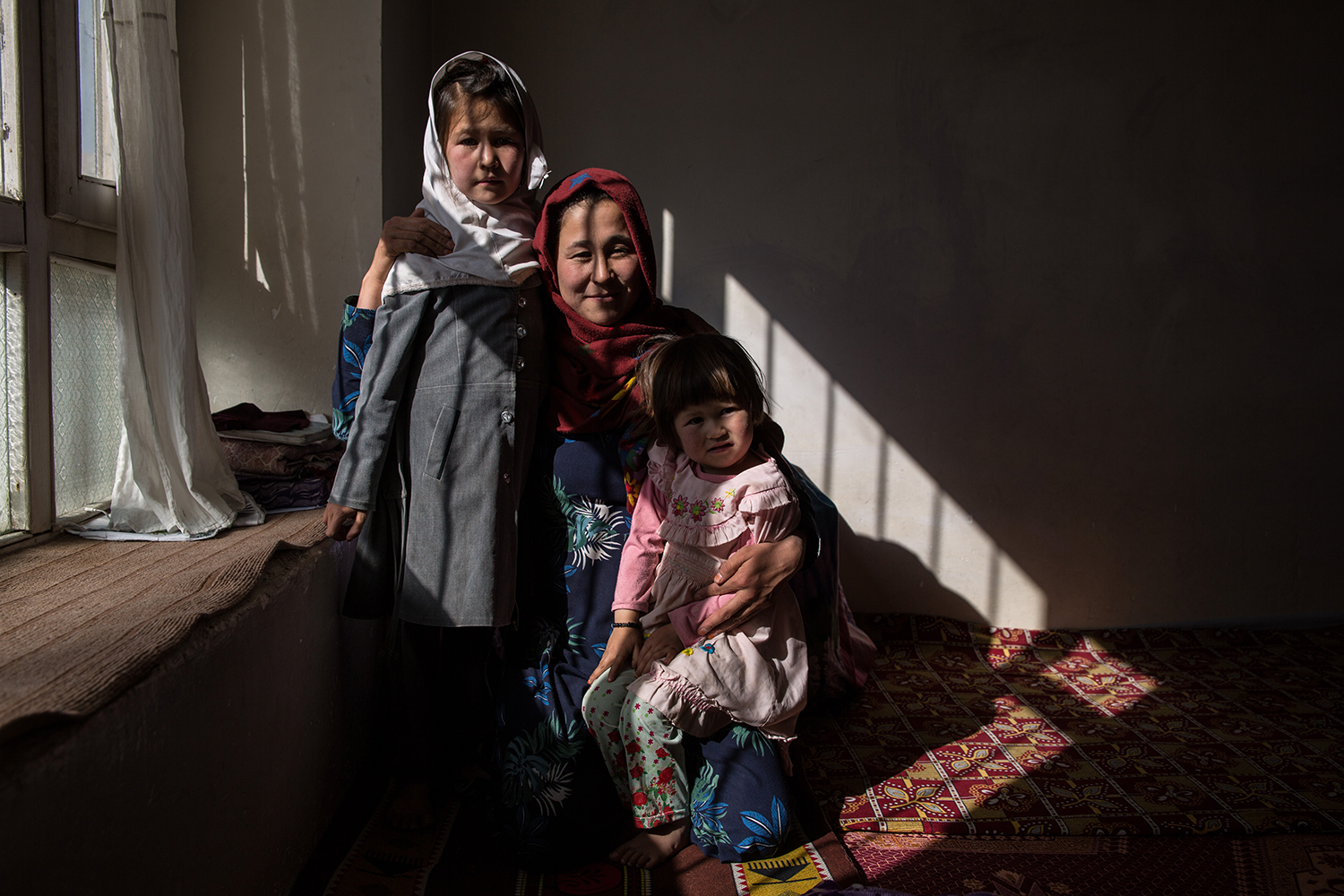 Fezah Rezayee, 26, seen with her family in Bamiyan province on Sept. 18, has decided not to vote in this year’s Afghan presidential election. Stefanie Glinski for Foreign Policy

Many fed-up voters echo that assessment. “I’ve decided against voting,” said Fezah Rezayee, a 26-year-old mother of two from the central province of Bamiyan who recently graduated with a psychology degree. “I believe my city is a lot safer than many other places throughout Afghanistan. But it means that throughout the country, many will risk their lives voting in an election that could be corrupted.”

Because past elections in Afghanistan have been marred by so much violence and fraud, many observers speculated that Saturday’s vote could have been postponed had a deal been struck between the United States and Taliban that could have seen an interim government form. But U.S. President Donald Trump suspended peace talks this month—citing Taliban violence—and the Taliban have vowed to target polling stations and warned voters to stay away.

The campaign period has seen two high-profile election-related attacks, with dozens of people killed. On Sept. 17, the Taliban claimed responsibility for a suicide attack in Parwan province at an election rally for Ghani. Thirty civilians were killed and 51 injured. On July 28, 21 civilians were killed and 50 injured in an attack on the Green Trend’s main office in Kabul, with no party claiming responsibility.

Defense Ministry spokesman Fawad Aman told Foreign Policy that 80,000 security forces have been mobilized in a bid to ensure people that the situation will remain “normal.”

“Over the last weeks, we have increased the number of raids and night operations, and we have gone into offense mode,” Aman said. “People can come outside and cast their votes. We will maintain and provide security for them.”

But throughout Kabul, new checkpoints and an increased army presence have worried residents more than they have reassured them.

Rusullah Monsur, a 27-year-old election aide, said he signed up to work in a polling station this Saturday for the extra cash, though he felt nervous about it. “I’ll be earning 12,000 afghanis [about $150] for the five days I’m helping out during elections,” he said.

“Of course I’m scared. We received many threats. I hope God will protect me, and I can serve my country.” His sister-in-law, who voted during the last presidential election, was shot in the chest three times after exiting the polling station. She survived, but—according to Monsur—she won’t be participating in this year’s election. While the Defense Ministry says it has “learned from past elections” and the “security situation in Afghanistan has improved,” realities on the ground prove different.

“If the election goes wrong, it could badly reflect on the government’s credibility,” Adili said, adding that a failed turnout could have long-lasting consequences. “It would create political tensions, which could cause more crisis and split the government. Yet at the same time, if things go well and conclusive results and a winner come forward, it will deliver a mandate to the next president to initiate peace negotiations.”

In the lead-up to Saturday, much of the presidential candidates’ rallying was done virtually, with the candidates addressing audiences via web call. “Let’s pick up again after the election” is an attitude echoed throughout Kabul. Fear is widespread, with most people wishing for peace above all.

“The campaigning is ending today [Wednesday], and we had been told by the Ministry of Interior before the campaign started that only certain venues in Kabul could be fully secured,” Adili said. “Therefore, there could be fear that not all polling centers are safe to go to vote.”

Getting to ‘Yes’ Has Just Gotten a Lot Harder in Afghanistan

An abrupt end to a possible deal with the Taliban sticks the United States deeper in the quagmire.

Doctors Struggle to Convince Pakistanis to Get Their Vaccine Shot