The Spanish government just moved a step closer to disinterring the remains of Francisco Franco. But as the country heads for yet another election, a new book shows that voters have other priorities.

Spain’s economic crisis, the buildup to and fallout from the Catalan independence referendum of 2017, and the country’s fractured politics have amounted to a tumultuous past few years—only reinforced by the impending election, its fourth in four years. These are the main themes of After the Fall, a superb new book by Tobias Buck, the Financial Times’ Madrid correspondent from 2012 to 2017.

Buck packs his narrative with revealing anecdotes and deeply informed analysis, taking the reader around Spain to explain with admirable objectivity how the economic crisis continues to affect communities and individuals. The reader comes away with a vivid understanding of the consequences of a period often discussed largely in macroeconomic terms by the international press.

Each chapter of After the Fall reads as a standalone essay—a structure that enables Buck to move effortlessly between different topics. “Spain’s Cross to Bear” is an especially thought-provoking section, exploring how the country is dealing with the legacy of its 1936 to 1939 civil war, and of the near 40-year dictatorship that followed. These fraught issues have recently made Spanish and international headlines again after a long period in the political shadows. 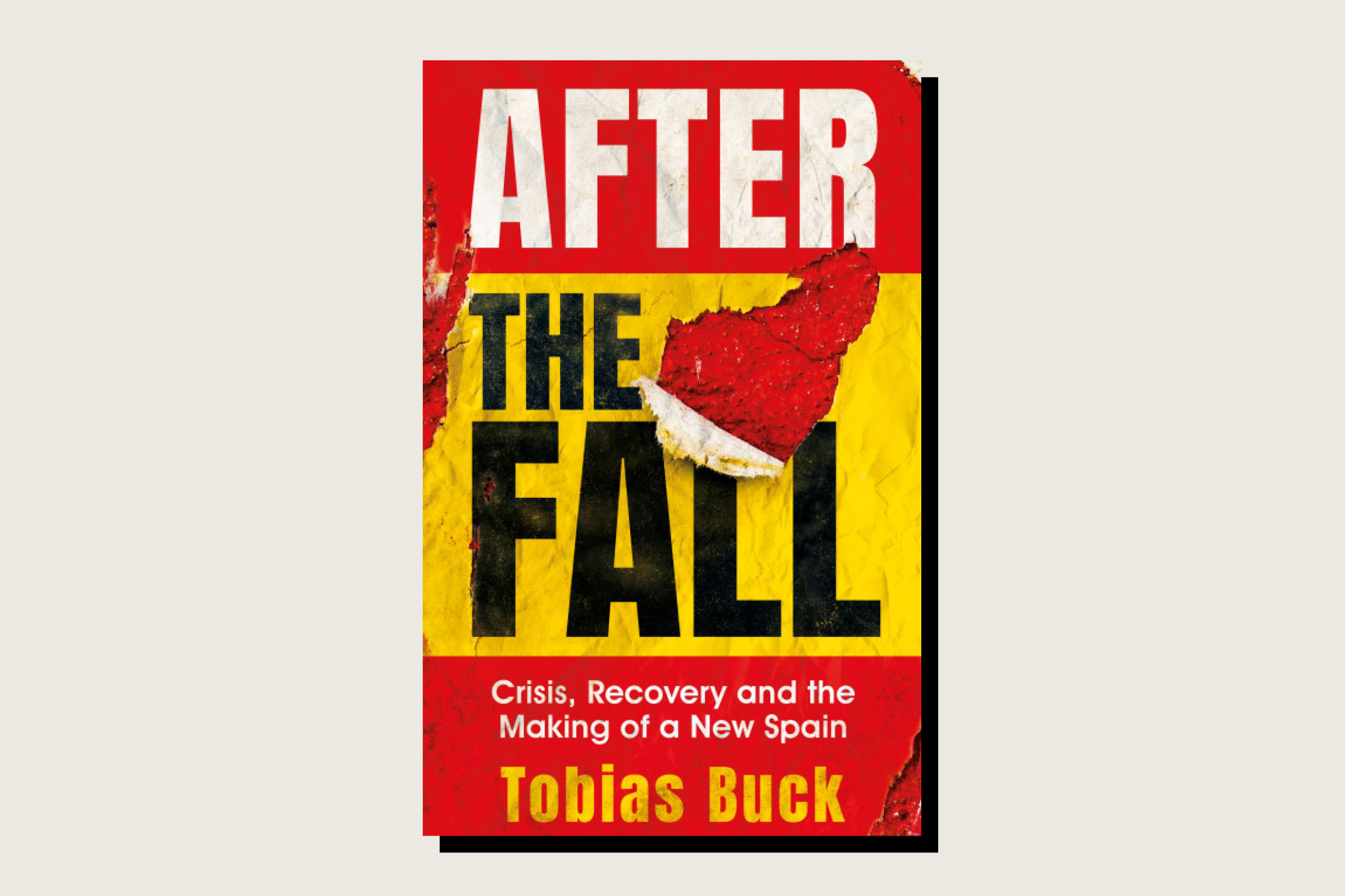 But their reemergence is likely to be short-lived—the latest attempt to confront the past, made by acting Prime Minister Pedro Sánchez of the Spanish Socialist Workers’ Party, is little more than gesture politics. And as Spain gears up for an election triggered by yet another round of failed cross-party negotiations, both the Spanish Civil War and Francisco Franco are likely to fall further down the political priority list, for voters and politicians alike.

Shortly after displacing his conservative People’s Party (PP) predecessor Mariano Rajoy with a no-confidence vote in June 2018, Sánchez announced his intention to remove the remains of Franco, dictator of Spain from the end of the civil war until his death in 1975, from his current tomb in the Valle de los Caídos, or Valley of the Fallen. Located about 30 miles north of the Spanish capital, this enormous complex was built by prisoners of war between 1940 and 1958 and houses the unmarked graves of more than 33,000 Republicans and Nationalists killed during the civil war, as well as those who died during construction. Last September, Congress approved the Socialists’ decree, and the exhumation was ordered to be carried out on June 10 this year, but an appeal by Franco’s family delayed the process.

Even if it goes ahead, the exhumation won’t achieve much unless it’s part of a broader project to reckon with the legacy of the civil war and dictatorship.

On Tuesday, news broke that Spain’s Supreme Court will back the government’s plan to exhume the remains and reinter them in the El Pardo cemetery north of Madrid. There are still obstacles standing in Sánchez’s way, though: The Franco family has said that it will appeal against the ruling to Spain’s Constitutional Court, and a Madrid judge is refusing to award the license necessary for the physical task of exhumation.

But even if it goes ahead, the exhumation won’t achieve much unless it’s part of a broader project to reckon with the legacy of the civil war and dictatorship. As Buck writes, “There has been no official commission [into the Franco regime], no national museum offering a unified narrative.” Sánchez has suggested turning the Valley into a “place of memory and reconciliation,” but these plans remain vague, displaced by the flagship policy of tomb relocation. Sánchez is right to describe the generalissimo’s giant grave as a symbol “that divides Spaniards,” but doing so leads to the question of whether its removal or relocation will magically unite the electorate—a poll carried out in July last year found that 41 percent were in favor of exhuming Franco, while 39 percent were against it. Over 54 percent thought that now is not the right time to exhume Franco.

That last statistic is revealing, suggesting that Spaniards’ concerns are elsewhere right now. Certainly, the emergence of Spain’s three new political parties over the last few years has owed little, if anything, to either a desire on the left to confront the past or a resurgence of Francoism on the right. The discontent that has propelled new parties—the leftist Podemos (“We Can”), the centrist Ciudadanos (“Citizens”), and the far-right Vox—to political power in the last several years is rooted in anger over corruption, austerity, immigration and the issue of Catalan independence, not the legacy of the Civil War or Franco’s dictatorship.

Nowhere is this clearer than in the case of Podemos, the leftist party formed by Pablo Iglesias in early 2014. Buck is accurate in describing Iglesias’s party as first and foremost an anti-establishment movement that has achieved “stunning success, fueled by the charisma of its leader, disgust with the old party regime and—above all else—by the rage and desperation of young Spaniards who were left without shelter in the economic storm.”

In “Left Behind,” a powerful chapter on unemployment, Buck invites the reader to consider just how real the recovery from that storm has been. He speaks with Marta Alba, a trained nurse from Seville, the capital of Andalusia—a region where a third of the population was out of work when he visited. Alba is struggling to find any job at all as her unemployment checks run out. A university student Buck interviews in Cádiz tells him that, in five years’ time, he’s “90 per cent sure [he’ll] be standing in the unemployment line.” Such cases jar with the upbeat macroeconomic narrative that was then being pushed by Rajoy’s government and organizations such as the International Monetary Fund.

As Buck convincingly argues, Podemos’s growth has been nourished chiefly by the anger that was on display in the 15-M movement, the huge anti-austerity demonstrations that started in Madrid in May 2011. The party’s public announcements on the legacy of the civil war and Francoism, by contrast, have been few and far between—although Iglesias supported Sánchez’s initiative and said of Tuesday’s Supreme Court ruling that it was “a very important step” in removing a monument that shamed Spanish democracy.

Spain’s latest political newcomer, the right-wing Vox, also achieved national prominence by tapping into public anger and unease. Founded in 2013 by Santiago Abascal, it languished in electoral obscurity for its first few years. Then Vox won 12 seats in the Andalusian Parliament last December and 24 seats in the national Congress (with 10.3 percent of the vote) in the April 28 general election, establishing itself as Spain’s fifth-largest party. But rather than “any desire to turn back the clock to the Franco era,” as Buck writes, its success is largely owed to a belief that Catalan separatists pose a threat to Spanish unity and that immigration, especially in the southern region of Andalusia, is reaching uncontrollable levels. Until recently, Abascal had steered clear of public discourse about Franco or the civil war, but after the Supreme Court decision on exhuming Franco, he went on the attack, characterizing the push to move Franco’s remains as “Desecrating graves, digging up hatreds, questioning the legitimacy of the monarchy” and, turning it into a campaign issue, declared that “Only VOX will be frontally opposed.”

The center-right Ciudadanos—the other party responsible, with Podemos, for ending the Socialists’ and PP’s decades-long duopoly at the end of 2015—gets the least space in the book. It’s an odd omission, given that it’s now the third most powerful party in Spain. Founded in Barcelona in 2006 and led by the lawyer Albert Rivera, it defines itself largely in terms of its opposition to the Catalan independence movement and its determination to rid Spanish politics of corruption.

The party’s progressive message appealed to younger, centrist voters unwilling to back the PP, and Ciudadanos scooped up 13.9 percent of the vote and 40 seats in congress in 2015, upping those numbers to 15.9 percent and 57 seats in this year’s previous election. But, like Iglesias, Rivera has kept his distance from announcements concerning Franco and the civil war, although he recently voiced his support for converting the Valley of the Fallen into a national cemetery similar to the U.S. military burial site in Arlington, Virginia.

The deeper question posed by Buck’s book is whether Spain actually needs a politically approved reconciliation with its troubled past. An idea he explores in the penultimate chapter is that such a task might be unnecessary, because modern Spanish democracy, by its very existence, demonstrates that the demons of the past have been vanquished.

Spain might have left the grim decades of dictatorship behind at a political level, but for Spaniards whose forebears were forcibly disappeared by Franco’s forces, the war and dictatorship chapter is far from closed. This is where the Association for the Recovery of Historical Memory comes in. Co-founded in 2000 by Emilio Silva and Santiago Macías, the organization is dedicated to exhuming and identifying the remains of an estimated 114,000 Spaniards who were killed by Franco’s forces and thrown into anonymous graves during the Spanish Civil War or the subsequent dictatorship. So far, the organization has recovered and given proper funerals to more than 1,300 bodies from these unmarked burial sites, even though its state funding fell drastically during Rajoy’s seven-year stint as prime minister and has not yet been restored to previous levels.

Even if the group is doing important work and many wounds remain unhealed, the question of how to deal with the legacy of the civil war is not a political priority in Spain right now, nor is it likely to feature in any of the upcoming campaigns or be a priority of the resulting government. Instead, Spain’s main parties, especially the newer ones, will focus on issues such as Catalonia, corruption, immigration, and the labor market, as they have been doing for the last few years. For now, Franco’s legacy will remain on the back burner.

Mark Nayler is a freelance journalist based in Spain. He writes on Spanish politics and culture for southern Spain's English-language newspaper, Sur in English, and for The Spectator.

The country’s snap election on April 28, its third in five years, may just be the prelude to another down the line.

Pablo Casado Was Meant to Save Spain’s Center-Right. He Destroyed It.

Spain’s conservatives lost more than half their seats in parliament by trying to outbid the far-right.

The upstart far-right party is unapologetically Islamophobic, but without donations from Iranian exiles, it may have never gotten off the ground.