Plus: Austria’s Kurz wins snap election, the U.S. whistleblower will testify, and what to watch in the world this week.

Here is today’s Foreign Policy brief: Hong Kong leader Carrie Lam heads to Beijing after a violent weekend, U.S. lawmakers will hear from the whistleblower who prompted an impeachment inquiry into President Trump, and what to watch in the world this week.

Here is today’s Foreign Policy brief: Hong Kong leader Carrie Lam heads to Beijing after a violent weekend, U.S. lawmakers will hear from the whistleblower who prompted an impeachment inquiry into President Trump, and what to watch in the world this week.

Hong Kong leader Carrie Lam heads to Beijing today, where she will join Tuesday’s celebrations marking China’s National Day—the 70th anniversary of the People’s Republic of China. Lam has been the target of weeks of pro-democracy demonstrations that began as protests against a controversial extradition bill to send suspects to China. Lam has the support of Beijing.

Ahead of her departure, protesters crowded Hong Kong’s shopping districts on Sunday in a direct challenge to Beijing. Activists clashed with police in some of the most violent unrest since the movement started in June. The police fired tear gas and water cannons as some protesters set fires and threw Molotov cocktails. The city’s local authorities have faced pressure to stop the protests from overshadowing China’s Oct. 1 anniversary.

Why isn’t Lam staying in Hong Kong? The chief executive had previously sent out invitations for a National Day ceremony in Hong Kong, but now another official will stand in. Lam will return to the city on Tuesday night by land—to avoid encountering a protest at the airport. “In these three months, Carrie Lam has not really cared about the protesters,” one demonstrator told Reuters. “She only cares about the CCP or what we might call ‘her boss.’”

Solidarity protests. Around 100,000 people turned out for a solidarity march in Taipei, reflecting unease about China’s growing reach as it pushes to bring Hong Kong’s “one country, two systems” model to Taiwan. Taiwanese President Tsai Ing-wen has voiced her support for Hong Kong’s protesters since June. Hundreds also marched in Sydney, with solidarity protests taking place in 40 more cities around the world on Sunday.

Austria’s Kurz seeks a coalition. As predicted, former Austrian Chancellor Sebastian Kurz won Sunday’s snap election—called in May after the government collapsed due to a scandal involving his far-right coalition partner. In Sunday’s election, Kurz took approximately 37 percent of the vote, the far-right Freedom Party lost ground, and the Green party picked up 14 percent of the vote. Now the conservative Kurz must decide how to form a government. The Freedom Party has lost popularity, while working with the Greens would require significant policy compromises.

U.S. House panel to hear from whistleblower. The chair of the U.S. House Intelligence Committee, Adam Schiff, said Sunday that it had finalized an agreement to hear private testimony from the whistleblower whose complaint about President Donald Trump’s dealings with Ukraine has led to an impeachment inquiry. A date and time for the whistleblower testimony has not been set. Meanwhile, White House officials have begun planning a strategy to respond to the inquiry and could present the plan to Trump as early as today.

Thousands protest in Moscow. Over 20,000 people demonstrated in Moscow on Sunday to demand that the protesters put in jail over the summer be released—an unusual public display of anger. The activists allege their detention is part of a government effort to stifle dissent: Several have been sentenced to up to four years, with others awaiting prosecution. (Ahead of the rally, authorities did drop charges against one activist.) Unlike previous rallies, Sunday’s protest was permitted by the city government—and no arrests were reported.

China marks the 70th anniversary of the ruling Communist Party on Tuesday with a massive military parade in Beijing showcasing 15,000 troops, 160 aircraft, and new weapons—including some never seen in public. President Xi Jinping will preside over the National Day ceremony, which comes at a challenging moment for China.

Israeli Prime Minister Benjamin Netanyahu’s pretrial hearing on corruption allegations will be held on Wednesday, as he fights to hold on to power—and immunity. Netanyahu will meet again with his rival Benny Gantz this week in a last-ditch effort to form a unity government.

The Saudi journalist Jamal Khashoggi was murdered one year ago Wednesday inside the Saudi consulate in Istanbul, and the kingdom still faces global criticism over his death. In a PBS interview that will air Tuesday, Crown Prince Mohammed bin Salman said he took some responsibility for the killing that “happened under my watch,” but denied ordering it.

Low turnout in Afghanistan. Though not all polling stations have reported yet, voter turnout in Afghanistan’s Saturday presidential election appears to be the lowest since the country’s first democratic vote in 2004. Under the threat of Taliban violence, as few as 2.2 million people—out of the 9.67 million registered—voted on Saturday. Preliminary election results are not expected until Oct. 19, with incumbent President Ashraf Ghani expected to win.

[Saturday’s election offered little hope for young Afghans who have grown up amid conflict and are now facing a mental health crisis, Sohrab Azad writes in FP.]

Wildfires in Bolivia. A caravan of indigenous activists is currently marching across Bolivia to push President Evo Morales to declare a recent increase in wildfires a national emergency. Morales, campaigning for a fourth term, has so far been reluctant to do so, and his government passed a law earlier this year expanding slash-and-burn agriculture in the regions now on fire.

The crisis in Nigeria’s northeast. The Nigerian government is threatening as many as 10 NGOs operating in the country’s northeast, claiming that they are aiding terrorist groups as it seeks to crack down on extremism in the region. In recent days, two agencies have been closed, and aid workers warn that if the crackdown continues it could create a humanitarian crisis.

A famous Sicilian chef arrested in Italy over the weekend for drug possession told police that he was only “researching new flavors” for his “third millennium cuisine.” Carmelo Chiaramonte, known across the country for his TV programs, had two marijuana plants at his house as well as cannabis-flavored wine, olives, and tuna.

The Solution to Canada’s Drug Crisis 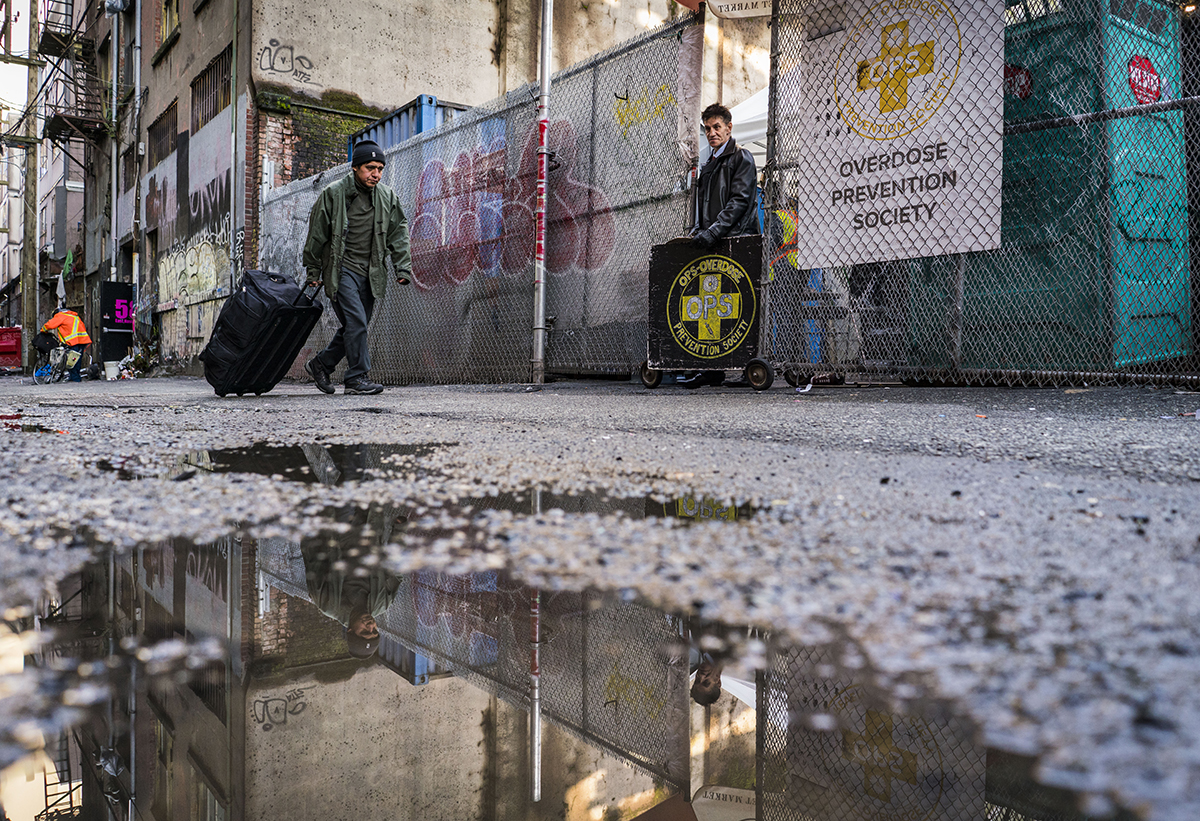 The federal election campaign in Canada has barely focused on the country’s opioid crisis, but a recent study shows that harm-reduction policies in British Columbia have saved thousands of lives. The activists and researchers on the front lines of the crisis in Vancouver say that to end Canada’s opioid epidemic requires decriminalizing the drugs that are causing it, Justin Ling reports for FP.

For more on these stories and many others, visit foreignpolicy.com, subscribe here, or sign-up for our other newsletters. Send your tips, comments, questions, or corrections to morningbrief@foreignpolicy.com.

NEW FOR SUBSCRIBERS: Want to read more on this topic or region? Click + to receive email alerts when new stories are published on China, Hong Kong

Iran’s Protesters Dig in Their Heels

As the regime’s violence intensifies, the protest movement is still gaining strength and global visibility.

As temperatures drop, Russia’s strikes on Ukrainian energy infrastructure have left the country in a dangerous position.