A Family Stranded by China’s Camps

Repression in Xinjiang leaves tens of thousands of children without parents.

NUR-SULTAN, Kazakhstan—Seyil Eldos is a shy teenager with large doleful eyes and an iron handshake. The 18-year-old has watched over his three younger brothers in a run-down neighborhood in Kazakhstan since they escaped from China.

The four of them are staying with distant relatives, a couple and their three children, in little more than a hovel on the edge of Nur-Sultan, the capital of Kazakhstan. They have a single stove to heat the place during winter when temperatures drop to minus 58 degrees Fahrenheit.

The four brothers, aged 12 to 18, are ethnic Kazakhs born in Xinjiang, China. Recently, their parents disappeared in China during separate return trips. The brothers have no idea where their mom and dad are—and fret that they are among the Uighurs, Kazakhs, and other mostly Muslim minorities imprisoned in a massive system of internment camps built over the last couple of years.

“It’s difficult to be a Kazakh in China,” Eldos started before falling silent, staring at his hands, pressed tightly together. I asked if he wanted to continue. He inhaled deeply and then said: “I’m afraid for my parents who are still in China … but I still want this article to be written because the situation over there is getting worse and worse.” 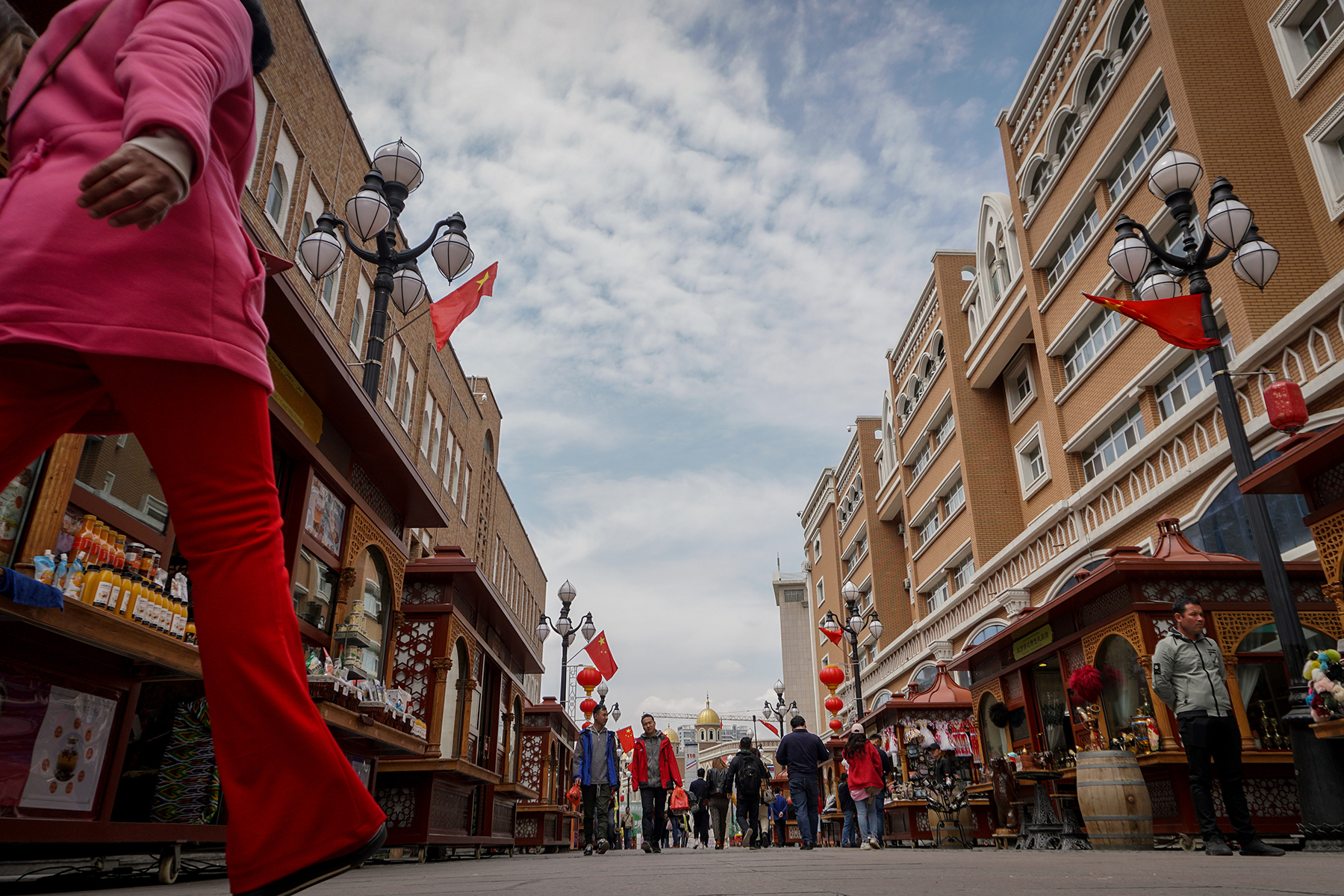 Outside the Xinjiang International Grand Bazaar in the capital of Urumqi, licensed vendors sell rugs, jewelry, and traditional trinkets from neat, allocated stalls on May 6. Chinese flags and a patriotic atmosphere prevail. Nathan A. Thompson for Foreign Policy

The brothers were all born in Ili Kazakh Autonomous Prefecture in Xinjiang, the scene of a “massive campaign of repression against Uighurs and other Muslim ethnic minorities,” including Kazakhs, according to a recent U.S. State Department briefing. While Uighurs, the majority population in Xinjiang, are the main target of the campaign, many ethnic Kazakhs have been targeted. It has prompted pushback from the Kazakh public—and a repressive response from a governing elite that has deep economic ties with China.

The brothers were all born in Ili Kazakh Autonomous Prefecture in Xinjiang, the scene of a “massive campaign of repression against Uighurs and other Muslim ethnic minorities,” including KazakhTheir father, Serik Galymkazy, was the first to disappear. (Biologically, he’s Sevil’s uncle; after Serik’s brother died young, Serik married his widow, Sevil’s mother— but Sevil treats him as a father.) After selling the family home in Ili and gaining residency for the family in Kazakhstan, he returned to Xinjiang in January 2015 after receiving a phone call from his former boss.

“We don’t know the reason they gave to make him return,” said Ershat Erlolsyn, a relative who supports the four brothers, his wife, and three children on about $350 a month. “We know he didn’t think it would be a problem to go and come back. Maybe he wasn’t aware of the new rules or when they came into force.”

The new rules requiring Kazakhs and other Turkic Muslims to hand in their passports weren’t posted publicly in Ili until April 2015, three months after Galymkazy disappeared there. The announcement, translated and published by Human Rights Watch, gives notice “to citizens holding ordinary passports to submit them to the police station in their jurisdiction for concentrated management.” It’s likely Galymkazy was detained before the official announcement. 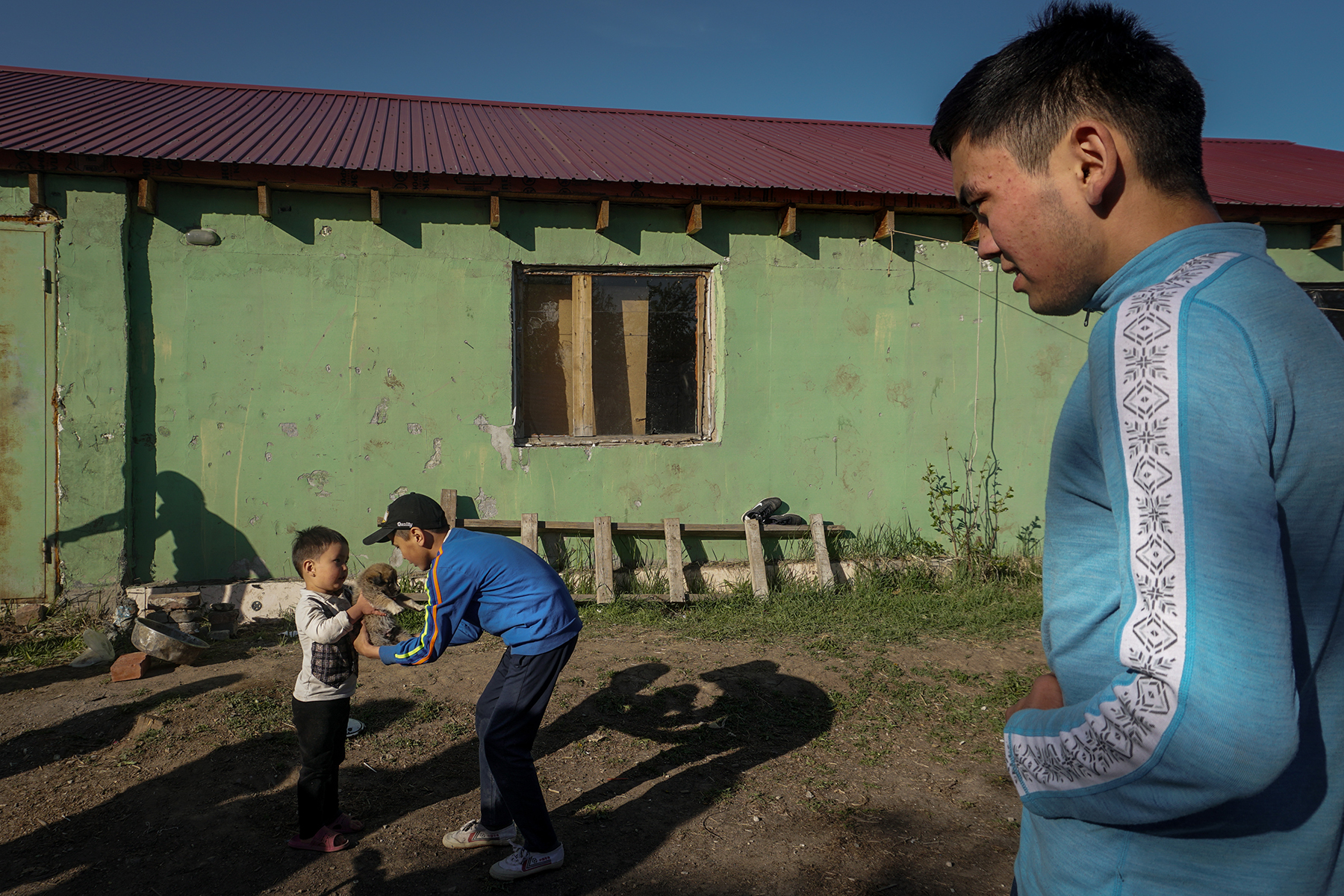 Eldos watches his brother play outside the house where they live with distant relatives on the outskirts of Nur-Sultan on May 17. Their caretakers have three young children of their own, making it a nine-person household (with at least one puppy) surviving on less than $300 per month. Nathan A. Thompson for Foreign Policy 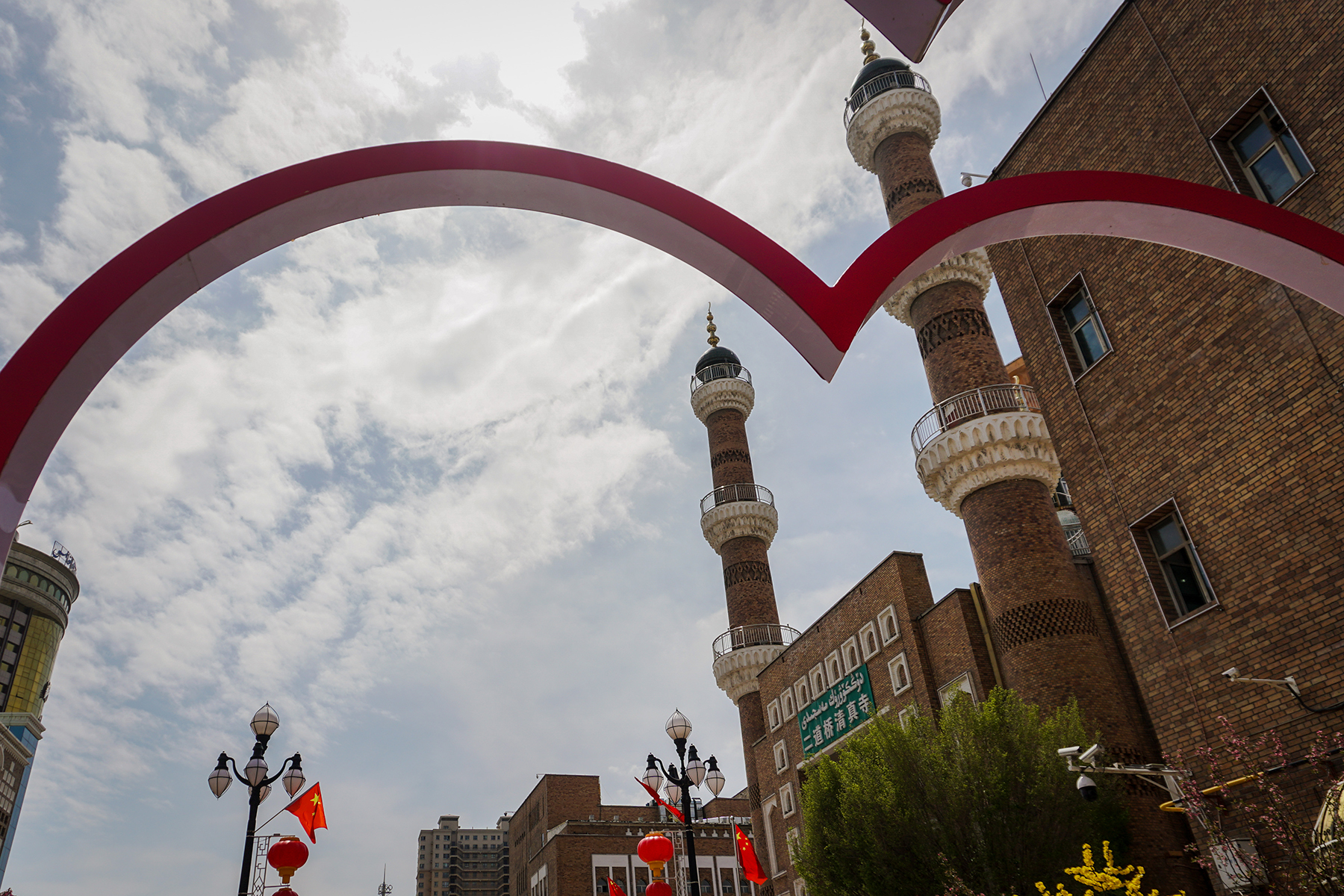 A mosque next to the Grand Bazaar in downtown Urumqi is glimpsed through an installation of giant plastic hearts on the street outside on May 6. Visitors have to pass through intense security to access the bazaar and mosque area. Nathan A. Thompson for Foreign Policy

Even though he was stuck in China, Galymkazy kept in touch with his family via WeChat. But it was worse when their mother, Gulzat Rysbai, was detained. She had been crossing the border every two months to visit her husband and also register at her old workplace, where she had been a veterinarian, to receive social security payments. But in January 2018 she never returned.

In the winter of 2017, reports of the construction of the camps began to reach Western media. The size and scale of the project were not yet apparent; initial estimates placed the numbers in the tens of thousands. By the early summer of 2018, the scale looked far bigger. Prime targets for detention included anyone who had been abroad—such as Galymkazy and Rysbai.

China defended itself against international criticism in a white paper released in March 2019. The Chinese authorities said their “intensive counterterrorism and de-radicalization efforts” were part of a legitimate “counterterrorism approach” in Xinjiang.

“Education and training centers have been established with the goal of educating and rehabilitating people guilty of minor crimes … in order to prevent them from falling victim to terrorism and extremism,” the white paper said. Chinese authorities did not respond to requests for further comment.

When I visited Xinjiang’s capital of Urumqi in May, the signs of oppression were constant: surveillance cameras every 100 yards, neighborhoods blocked behind security gates, and bag searches and metal detectors everywhere from coffee shops to train stations. Even for residents not formally in detention, control was constant.

According to Human Rights Watch, “[t]he Xinjiang authorities have, since around October 2016, prevented Turkic Muslims from leaving the country by requiring that they hand in their passports.” While this date is well after Galymkazy was detained, it is this measure that eventually caught up with Rysbai.

Soon after Rysbai’s passport was revoked, her WeChat messages were deleted, and her number was blocked. Their father also went silent. “We had no contact with my mother and father for three or four months,” Eldos said.

The brothers went to school and kicked a football around their scrappy yard, living every day with a big, dark hole where their parents used to be. After an agonizing wait, Eldos said they received two or three calls from their mother. “She sounded strange and cold. The calls were extremely brief and limited to formalities such as ‘How are you?’ and ‘Are you safe?’ She avoided answering any questions about her whereabouts or situation. It made us think there was someone there watching her as she talked.” Even if their parents have avoided the detention camps, they sold all their assets before leaving China and have been living an itinerant, vulnerable existence, dependent on relatives.

The Kazakh human rights lawyer Aiman Umarova, who has taken their case pro bono, said it was no coincidence that the most recent contact came in April. “We released an advocacy video about the boys [on April 11], and within a couple of weeks, we had a phone call from the parents requesting we remove it,” she said. “We decided to keep it online as I believe advocacy is the best chance they have of seeing their parents again.” Advocacy on behalf of individual detainees has produced results, especially for non-Uighurs. Released detainees, however, are generally still trapped in Xinjiang and subject to other forms of monitoring and punishment. 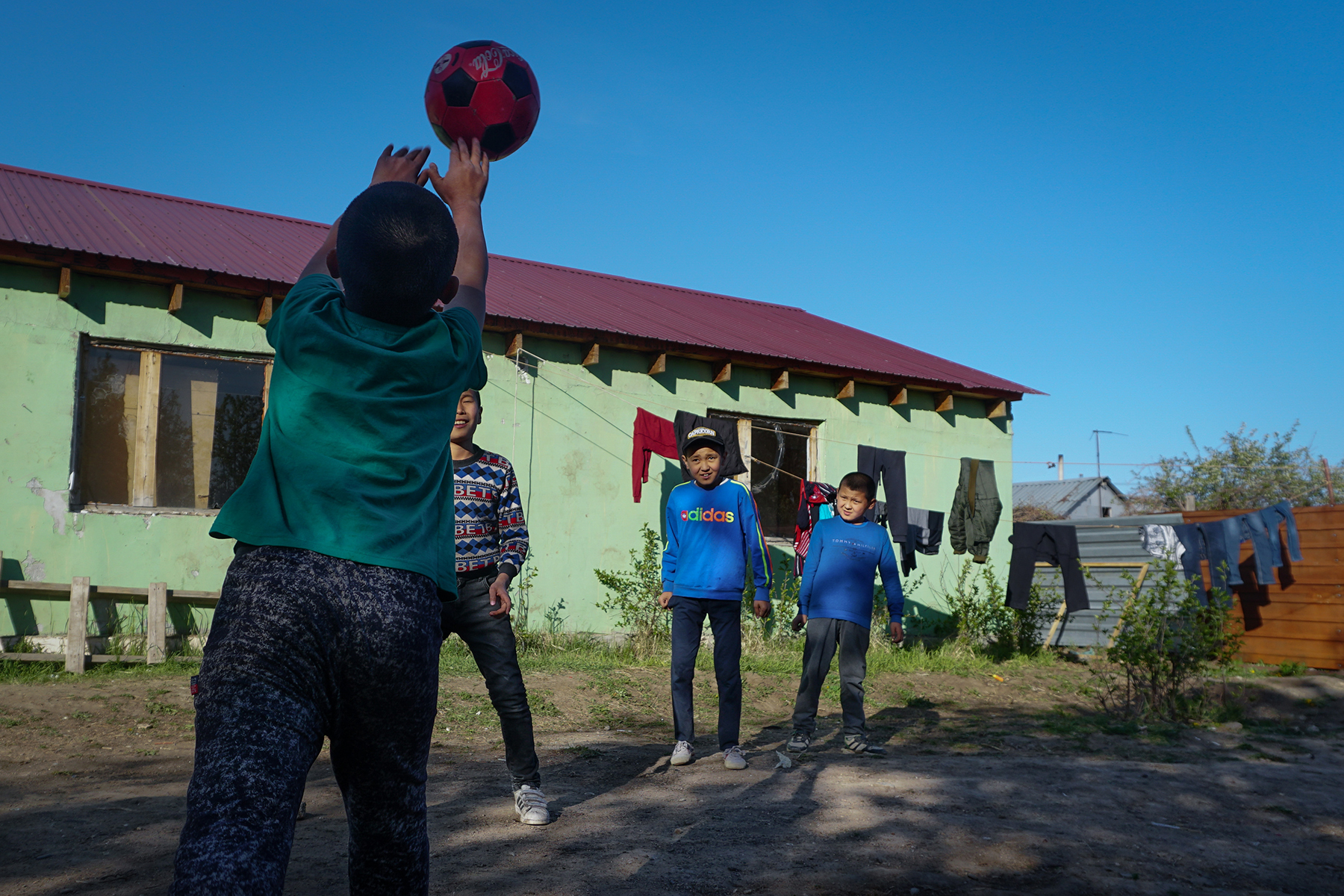 The children play in their backyard on May 17. It’s balmy in the summer, but in the winter, temperatures in Nur-Sultan can drop as low as minus 58 degrees Fahrenheit. Inside their house, single-glazed windows are all that shuts out the deadly cold. Nathan A. Thompson for Foreign Policy

Eldos put his arm around his youngest brother, Ilnor, who is 12. “If we return to China, we will be forced to stay there, but we don’t want that,” he said. “[In China] it’s a crime to talk about your nation and beliefs. They have banned our language, festivals, and religion.”

But it might not be up to them. Eldos has been able to apply for citizenship because he is 18, but the younger three are at risk of being deported, especially Ilnor, whose old Chinese passport will expire by the end of the year, leaving him without documents.

Every day is uncertain, the brothers hoping the Chinese authorities don’t lodge a formal request to return them to Xinjiang. “If their parents were here, it would be no problem to get a new passport and a residence permit,” Umarova said. “But now it is very difficult.”