Here is today’s Foreign Policy brief: The White House gives a green light to a Turkish offensive in northern Syria, security forces fire on demonstrators in Iraq, protesters in Hong Kong defy threats and the mask ban, and what to watch in the world this week.

Here is today’s Foreign Policy brief: The White House gives a green light to a Turkish offensive in northern Syria, security forces fire on demonstrators in Iraq, protesters in Hong Kong defy threats and the mask ban, and what to watch in the world this week.

At 6:30 am local time Monday, U.S. troops withdrew from their observation posts in northern Syria after a late night call between U.S. President Donald Trump and Turkish President Recep Tayyip Erdogan. Turkey has long been planning an incursion into northern Syria to push out Syrian Kurdish groups that Ankara regards as terrorists; Erdogan also hopes to create a so-called safe zone in the area in order to repatriate some of the millions of Syrian refugees living in Turkey.

But the Kurdish fighters Erdogan wants to force out of the area have been key U.S. allies in the fight against the Islamic State—a fact that they are keen to point out. The U.S. move leaves the Syrian Kurdish Democratic Union Party (PYD) and the People’s Protection Units (YPG) exposed to a Turkish onslaught, which Erdogan says could come as soon as today.

What does Turkey want? “Our aim is, I underline it, to shower east of the Euphrates with peace,” Erdogan declared. His advisor Ibrahim Kalin was more specific on Twitter. “The safe zone plan has two purposes, to secure our borders by eliminating terror elements and to ensure the safe return of refugees.” Turkey is facing growing domestic pressure to deal with the millions of Syrian refugees in the country. Though they were initially welcomed, public sentiment has begun to turn against them, as Selim Sazak has reported in FP.

According to Sinan Ulgen, the chairman of the Istanbul-based EDAM think tank and a visiting scholar at Carnegie Europe, Trump’s move will force Syrian Kurds to make a “more realistic assessment of the sustainability of U.S. support given the position of Turkey, a NATO ally. Washington had always told Ankara … that U.S. support to the PYD was tactical in nature. Now Trump’s decision proves this point,” Ulgen wrote in an email to FP.

Did Trump defy experts at the Pentagon and State Department? The issue of U.S. troops in Syria has divided the Trump administration for years. Former Defense Secretary Jim Mattis stepped down in the wake of Trump’s announcement of a full withdrawal of 2,000 U.S. troops from Syria in late 2018. Soon after Mattis resigned, Brett McGurk, a special presidential envoy focused on the Islamic State, followed in his footsteps. After their departures, U.S. officials sought to keep some forces in northern Syria.

McGurk is just as critical of Trump today. Speaking to the New York Times after news of the Trump-Erdogan call broke, he argued “This looks to be another reckless decision made without deliberation or consultation following a call with a foreign leader.” It could also lead to further instability in his view. “The White House statement bears no relation to facts on the ground,” he told the Times. “If implemented, it will significantly increase risk to our personnel, as well as hasten ISIS’s resurgence.”

More than anything, the U.S. move allows “Trump to return to his original decision of completely withdrawing from Syria,” Ulgen argued in an email to FP. “He does not see Syria as having any strategic value for the U.S. He also did not want to risk totally alienating Turkey at a time when the containment policy towards Iran has reached a critical stage. Ultimately, Trump was forced by Erdogan to choose between Turkey and the PYD,” he added. Trump, it appears, has chosen Turkey.

Will it help or harm U.S.-Turkey ties? According to Ulgen, “Trump’s decision is important to assuage the very widespread anti-Americanism in Turkey,” which has in part been driven by U.S. support for the PYD, which Turkey views as identical to the Kurdistan Worker’s Party (PKK), against which it has been fighting a war for decades. While the PYD is no match for Turkey’s military, an offensive in northern Syria could, he adds, pose an “additional risk is for the PKK to re-engage in terror activities within Turkey.”

An anonymous current U.S. official took a darker view, telling the Washington Post that the Trump administration “has no idea” whether Turkey’s incursion would be minor or a major push deep into Syria territory; the latter could place prisons holding captive Islamic State fighters in danger. “There are many potential disastrous outcomes to this,” the official told the Post.

Iraq protests grow despite government response. Over 100 protesters have been killed in Iraq, where security forces have opened fire against anti-government demonstrators as unrest stretches into a seventh day. More than 6,100 people have been injured across the country. The protests came as a surprise for the government of Prime Minister Adel Abdul Mahdi. On Saturday, he announced an emergency plan to help quell the unrest, offering an increase in housing and unemployment stipends. But on Sunday, protesters returned to the streets.

On Sunday, an Iraqi government official claimed that security forces had not fired on protesters, contradicting activists’ and journalists’ reports from the ground. Amid the unrest, the government has cut off the internet in much of the country but the blackout hasn’t stopped people from turning out for the protests, which don’t appear to be centrally organized.

Hong Kong protesters defy laws, and Chinese troops issue first warning. After colonial-era emergency laws and a ban on face masks took effect in Hong Kong, protesters came out in defiance over the weekend. Dozens were arrested under the new rules: Demonstrators who break the mask ban face up to a year in jail. As a crowd of protesters gathered near Chinese army barracks, military personnel issued a verbal warning to protesters to “Bear consequences for your actions” in Cantonese—the first direct engagement between the People’s Liberation Army and Hong Kong’s anti-government protesters.

The threats only seem to have further angered the activists. “We are not afraid of the new law, we will continue fighting,” one told Reuters. “I put on the mask to tell the government that I’m not afraid of tyranny.”

Nobel week begins today, with the Nobel Peace Prize scheduled to be awarded in Norway on Friday. Many bets are on the teenage climate activist Greta Thunberg winning the prize, though world leaders including the prime ministers of Ethiopia and New Zealand are high on the list.

Former U.S. Ambassador to Ukraine Marie Yovanovitch testifies before the House on Friday as part of the impeachment inquiry. President Donald Trump recalled Yovanovitch from Ukraine in May, as reported by FP. Her removal is now a key focus of the House inquiry into allegations that Trump pushed Ukraine to investigate former Vice President Joe Biden.

Macron issues deadline for Brexit plan. French President Emmanuel Macron insisted Sunday that British Prime Minister Boris Johnson must come up with a new Brexit plan by the end of the week—rather than aiming for last-minute negotiations at the EU summit on Oct. 17. That leaves only a few days for Britain to make changes to key proposals, particularly on the Irish border. Today, opposition lawmakers are expected to push for the full alternative backstop plan to be made public.

Tunisia is set to hold a presidential runoff on Sunday, but one of the two candidates remains jailed on charges of tax evasion and money laundering. Meanwhile, Tunisia’s lawmakers could struggle to form a government after a fractured vote in the country’s parliamentary elections.

France’s IVF law. Tens of thousands protested in Paris on Sunday against a new law that grants single women and lesbian couples the right to conceive a child using IVF or other medically-assisted methods. The law is President Emmanuel Macron’s first social reform, but it has roiled traditional Catholic and far-right activists. It has not yet passed the French senate.

The peace plan for eastern Ukraine. In Kyiv, thousands demonstrated on Sunday against President Volodymyr Zelensky’s recent agreement with Russia to grant autonomy to the pro-Russian Donbass region in an attempt to reach a peace deal. Currently, Zelensky’s party doesn’t have enough votes in Ukraine’s parliament to change the constitution and give Donbass autonomy.

Sri Lanka’s presidential election. Sri Lankan President Maithripala Sirisena will not run for re-election next month, facing mounting criticism—particularly for his government’s handling of intelligence about the bombings that killed 250 people in April. A record 41 candidates have registered for the November election, including Gotabaya Rajapaksa, the former defense minister and brother of the former president. Rajapaksa is the frontrunner; he has also been accused of war crimes and may face litigation in U.S. courts.

Protests in Haiti. Protests continue in Haiti over corruption and shortages of fuel and food, leading to disruptions in aid and paralyzing the economy. The communities outside the capital, Port-au-Prince, are particularly vulnerable as barricades and demonstrations cut off the supply of basic goods. 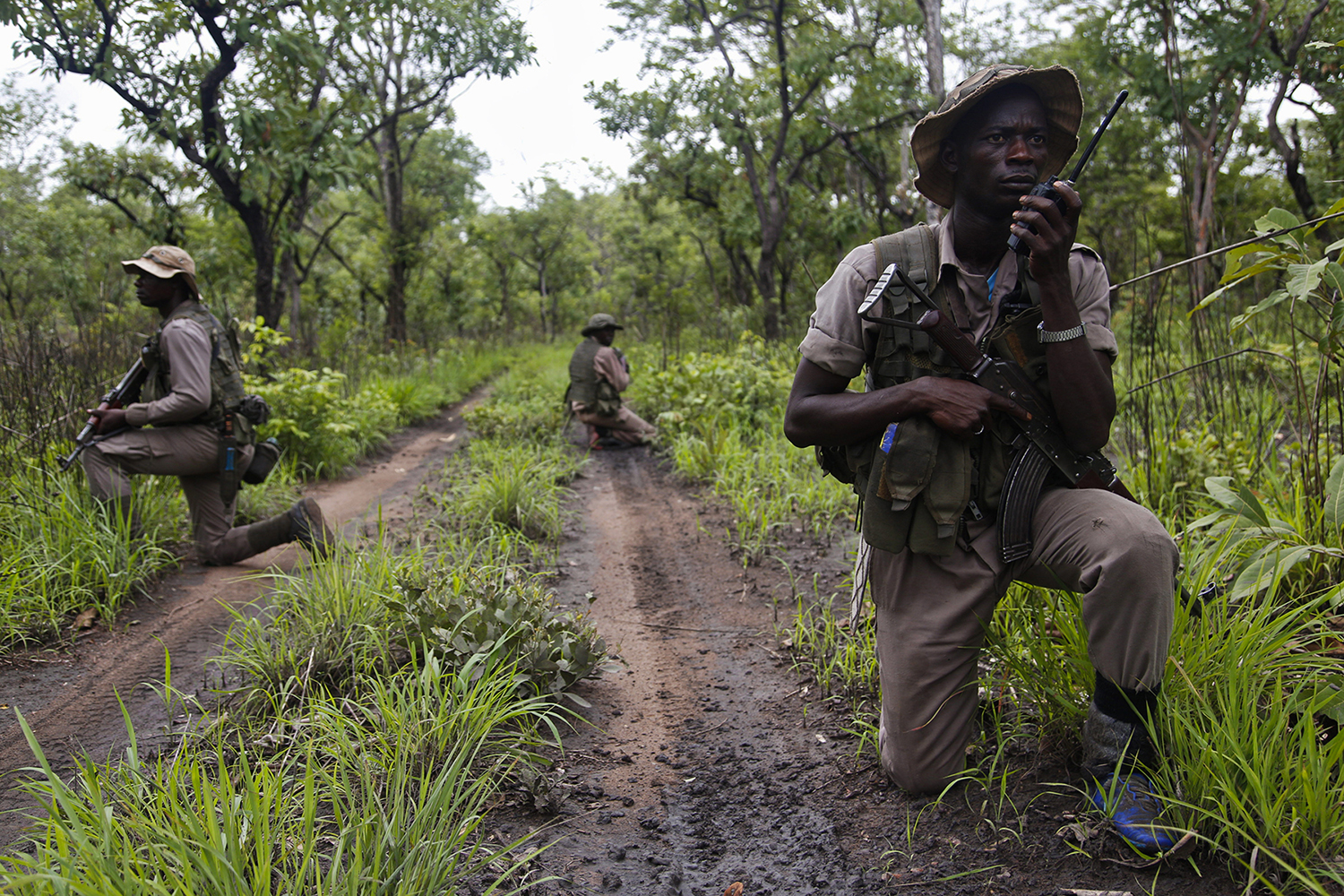 Jean Ghodjendji radios back to colleagues at an advance post during a foot patrol in Bamingui-Bangoran National Park in the Central African Republic while fellow rangers scan the forest on May 18. Jack Losh for Foreign Policy

Threatened by militias and poachers, the Central African Republic is one of the world’s most hostile areas for conservation. Bamingui-Bangoran National Park, one of the country’s oldest has been pushed to the brink. There, 50 rangers and scouts must protect the park’s animals—and themselves—in a weakly governed space, Jack Losh reports for FP.

On the island of Samothraki in Greece, there are 15 times as many goats as humans—and their grazing threatens the local ecosystem, the Associated Press reports. EU subsidies caused a boom in traditional goat herds, but erosion on the island is now approaching crisis level as residents search for a sustainable solution.

NEW FOR SUBSCRIBERS: Want to read more on this topic or region? Click + to receive email alerts when new stories are published on Human Rights