In Bamiyan, an all-female demining team provides jobs and hope.

As she combed through the red soil of her native Bamiyan province this August, 22-year-old Layegha Marfat felt her demining probe knock against something metallic. She carefully set down her tools and began to unearth a corner of the dinner plate-sized object by hand. It’s innocuous to the untrained eye, but Marfat immediately recognized the danger. It is a Soviet-era anti-personnel mine.

Along with 39 other women, Marfat is a member of Afghanistan’s first all-female demining team. Inaugurated in 2018 by the United Nations Mine Action Service, the $450,000 pilot program has two primary aims.

As she combed through the red soil of her native Bamiyan province this August, 22-year-old Layegha Marfat felt her demining probe knock against something metallic. She carefully set down her tools and began to unearth a corner of the dinner plate-sized object by hand. It’s innocuous to the untrained eye, but Marfat immediately recognized the danger. It is a Soviet-era anti-personnel mine.

Along with 39 other women, Marfat is a member of Afghanistan’s first all-female demining team. Inaugurated in 2018 by the United Nations Mine Action Service, the $450,000 pilot program has two primary aims.

The first is to equip women with the skills and training to clear their communities of the deadly remnants of decades of war. Even in the relatively peaceful Bamiyan, a province in Afghanistan’s central highlands, land mines and other explosives remain pervasive.

Second, the program provides women with an opportunity to throw off Afghanistan’s deeply entrenched gender roles and thrive in a new and challenging profession. Demining offers Afghan women increased financial independence and—in many cases—has opened doors for them to study for a diverse range of careers including law and business. Those are options that would have been out of reach without the financial assistance demining provides.

As the women work toward their broader goals, they are making their country safer, one mine at a time. 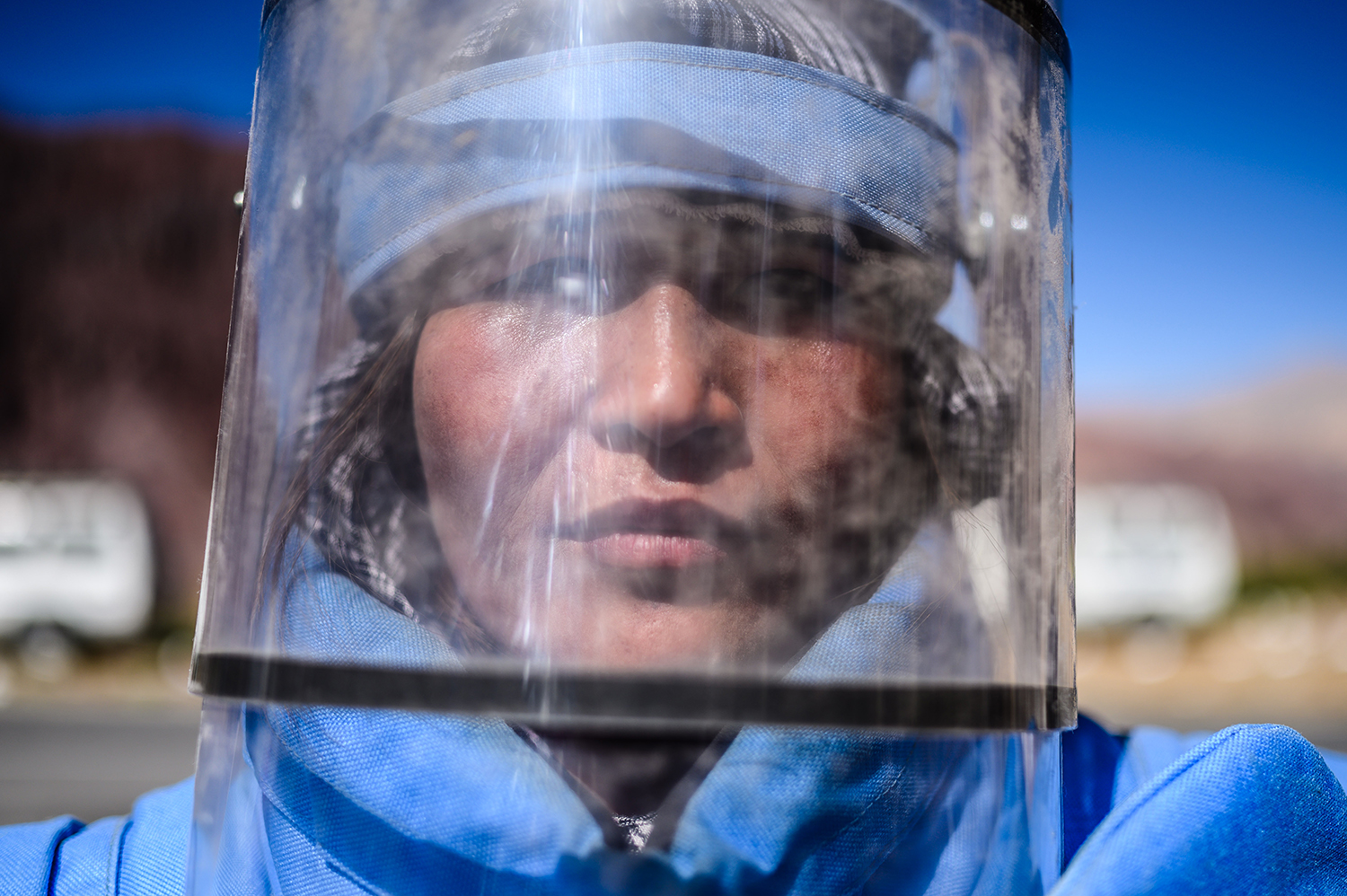 Marfat in her protective helmet in Bamiyan on Sept. 18. Kern Hendricks for Foreign Policy 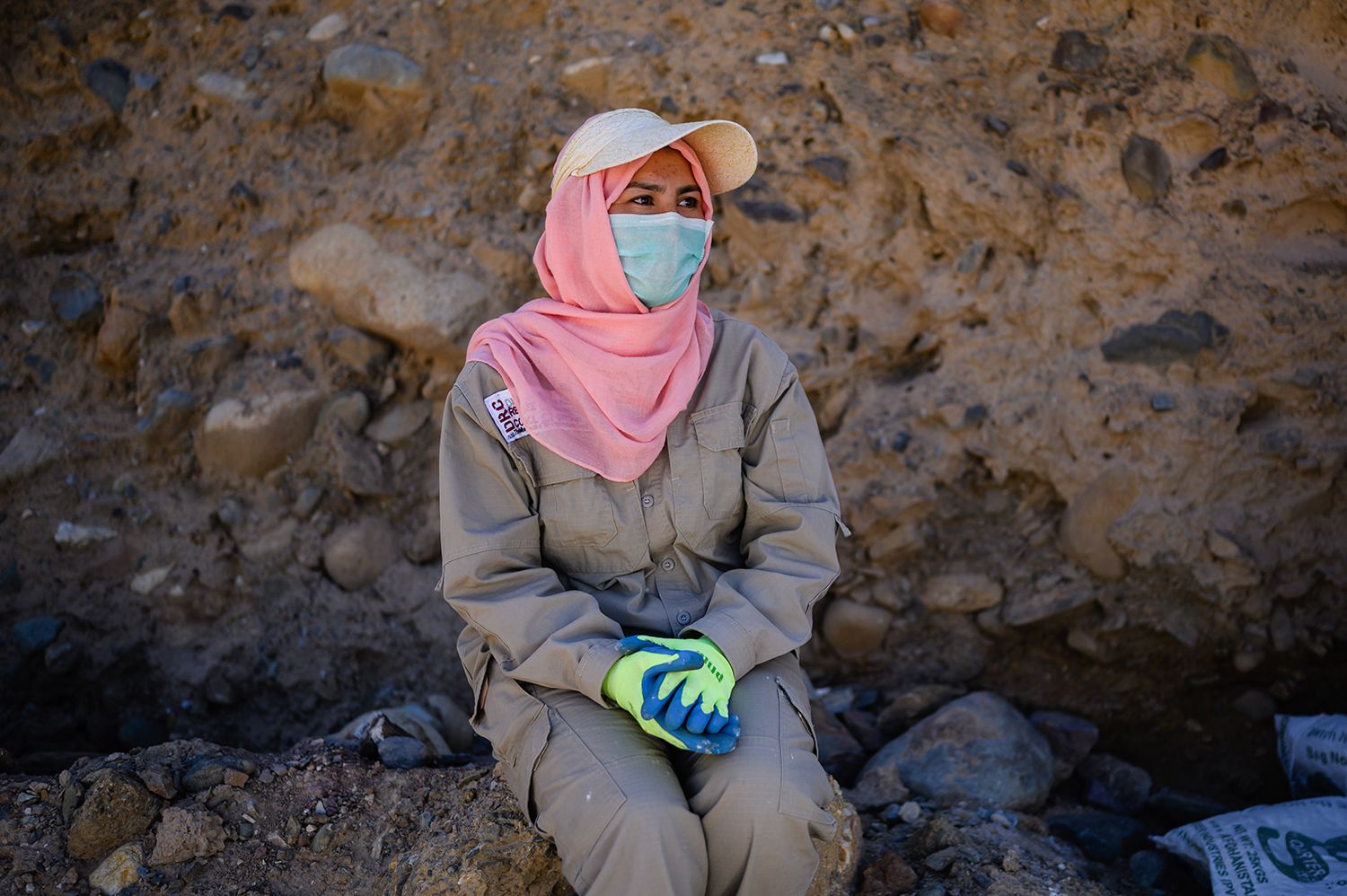 Jamila, a 34-year-old member of the demining crew, in Bamiyan on Sept. 18. Kern Hendricks for Foreign Policy

Despite oft-repeated claims of progress for Afghan women over the past 18 years, a raft of challenges remain. In conservative rural areas, women still struggle daily for recognition of their value, and they continue to face pervasive harassment and discrimination. Although ostensibly equal to men in the eyes of the 2004 Constitution of Afghanistan—even dating back to the pre-Taliban 1964 constitution—the day-to-day reality for many women is far from one of equality. Change has been slow, and a prevailing conservative culture continues to place women firmly in the role of second-class citizens.

Even within relatively liberal urban centers such as Kabul, and in some unique social enclaves like Bamiyan, working women are still the exception. A recent Gallup poll found that nearly half of all Afghan women would leave the country if given the means and opportunity. The same poll also found Afghan women to be the “least satisfied women in the world with the freedom to choose what they do with their lives.” No wonder: 80 percent of women in Afghanistan are left out of the workforce, many having never held a job in their life. Within this difficult context, the progress of these female deminers is all the more remarkable.

The youngest on the team is Zarah Atayee, who is 21 years old and has been working as a deminer for about five months.

Atayee began her working life at 16, traveling from house to house in her community to teach basic school subjects such as math and spelling to younger children. Both of Atayee’s parents are illiterate, and the burden of contributing to the family finances was placed on her shoulders at an early age. In previous years, Atayee’s father, Ali Hussain, worked as a guard with one of the male demining crews. But when he was not rehired for a new season of mine-clearing, Atayee decided to submit her own application for a position on the newly established female demining team. Few full-time jobs are available to women in Atayee’s position, and even with the extreme dangers involved, demining’s $400 per month salary—about four times what she would make in a civil society position—was too good to pass up. 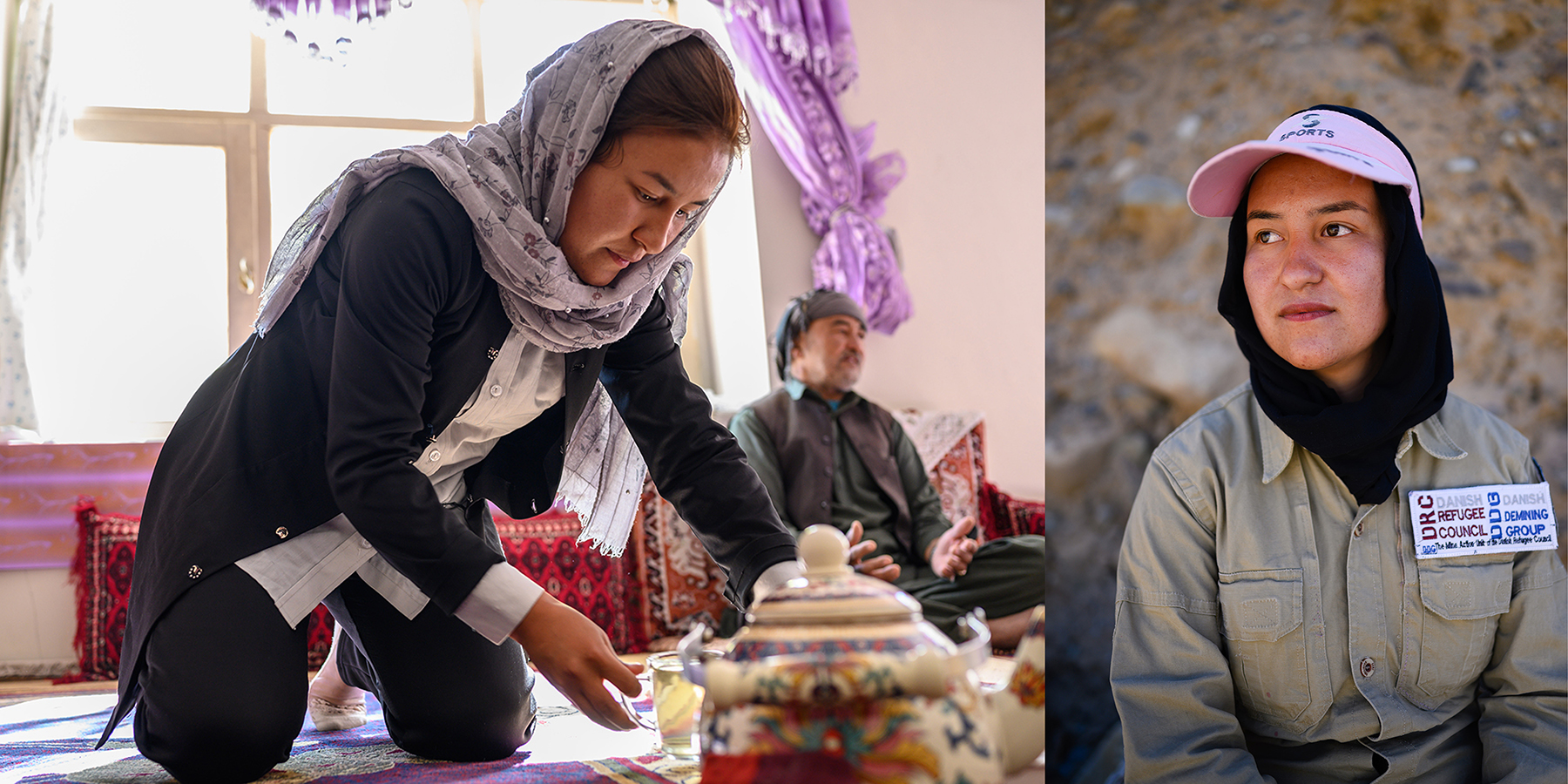 Zarah Atayee, who at 21 is the youngest woman on the demining team, at home with her father, who used to work as a deminer himself, and in the field in Bamiyan on Sept. 18. Kern Hendricks for Foreign Policy

Atayee’s father supports her decision to work and is proud of her ability to support their family—it is the only thing putting food on their table. However, he also acknowledges the dangers that her job entails. “When she’s working in the field, we don’t know if she’ll come across a mine or not,” he said. “But she has to do this work, because we are desperate.”

Although Atayee takes great pride in her work, she has plans for her future that lie far beyond Bamiyan’s rocky, booby-trapped fields. She is saving money to get a bachelor’s degree in business and then start her own clothing design company. For now, she continues to embrace the difficult and dangerous responsibilities of her current vocation.

Many others from the group have similar stories of single-handedly supporting their families while also studying for careers that they hope to pursue in the future. Fiza Rezayee, a mother of two, finances her husband’s studies at a university in Kabul, hundreds of miles away—something that Rezayee herself encouraged him to do. Jamila, at 34—the oldest of the group—is the sole breadwinner for her family of five, yet she finds time to study in the evenings, with the goal of becoming a practicing lawyer. 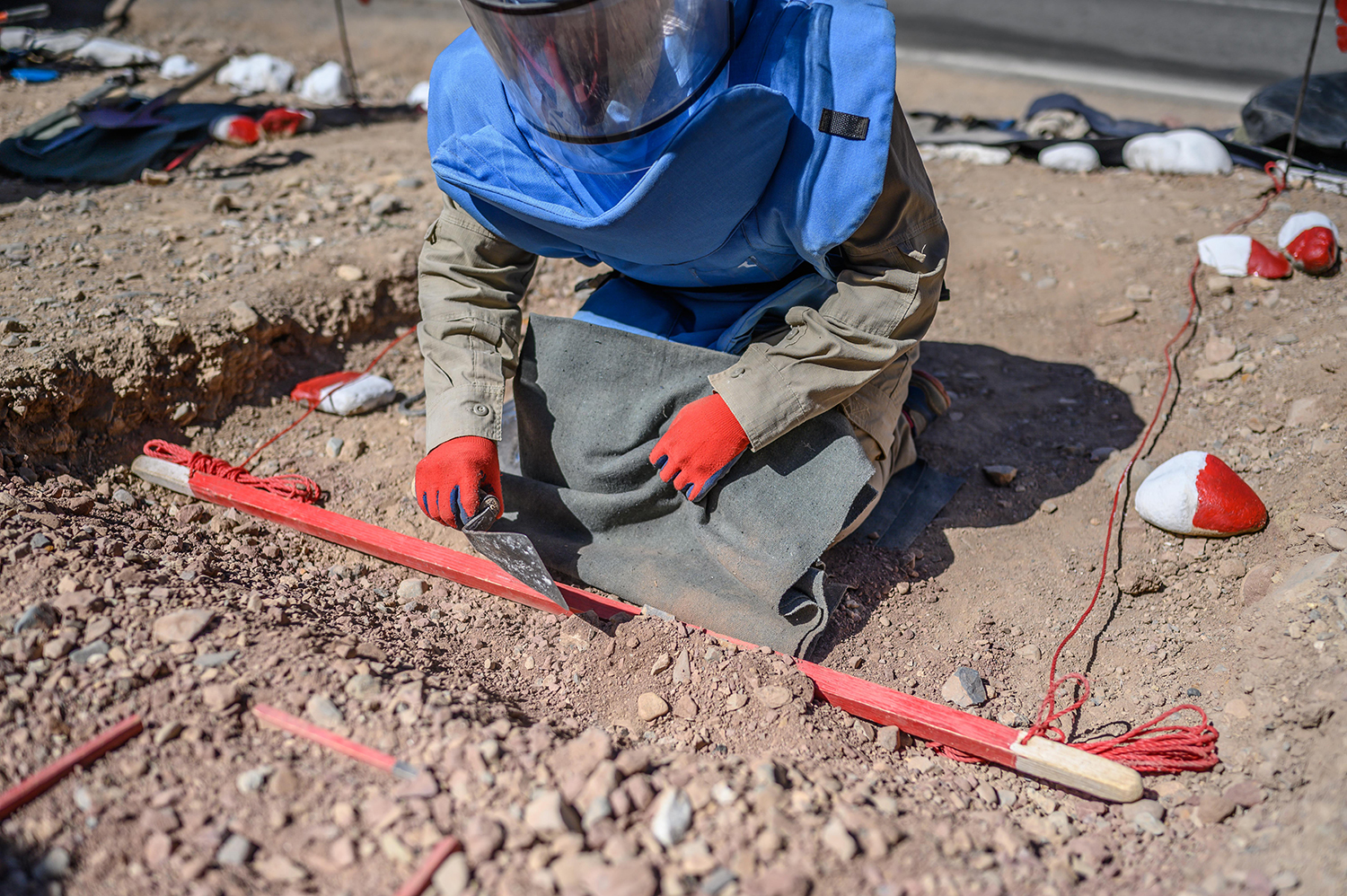 Marfat demonstrates how mines are unearthed by hand in Bamiyan on Sept. 18. Kern Hendricks for Foreign Policy

Afghanistan is one of the most heavily land-mined countries in the world. The legacy of four decades of conflict is staggering: Almost 700 square miles of Afghan soil remains contaminated by mines and other explosives, including artillery shells, mortars, and deadly cluster munitions—bombs weighing hundreds of pounds that, prior to impact, eject hundreds of golf-ball-sized bomblets that spread far and wide

On May 17 this year, one such cluster bomb that had lain dormant for decades behind a small school in Bamiyan detonated, killing three young boys. Their bodies were not discovered until nearly 24 hours later. And in 2018 alone, more than 1,400 Afghans were killed or injured by land mines and other explosives, a number that has tripled since 2012. Among these victims, around 80 percent are children.

Clearing Afghanistan of unexploded ordnance is thus an enormous task.

The international community is estimated to have spent around $1.5 billion on mine clearance projects in Afghanistan over the past 30 years, but only one of country’s 34 provinces has yet been declared mine-free, although Bamiyan is getting close.

To put it over the finish line, the women of the demining team do their work entirely by hand.

A three-hour hike from the nearest road, up a steep and winding trail, the women scan the rocky ground with metal detectors. They are on high alert, searching for the telltale magnetic signature of a mine or fragment of unexploded ordnance.

When a suspicious object is discovered, the deminer must get onto her knees and dig, using a metal probe to precisely map out the device’s type and orientation. Once identified, mines and other explosives are nearly always detonated where they lie, to avoid further danger. Four of the women are soon to undergo training for this important portion of the demining process. 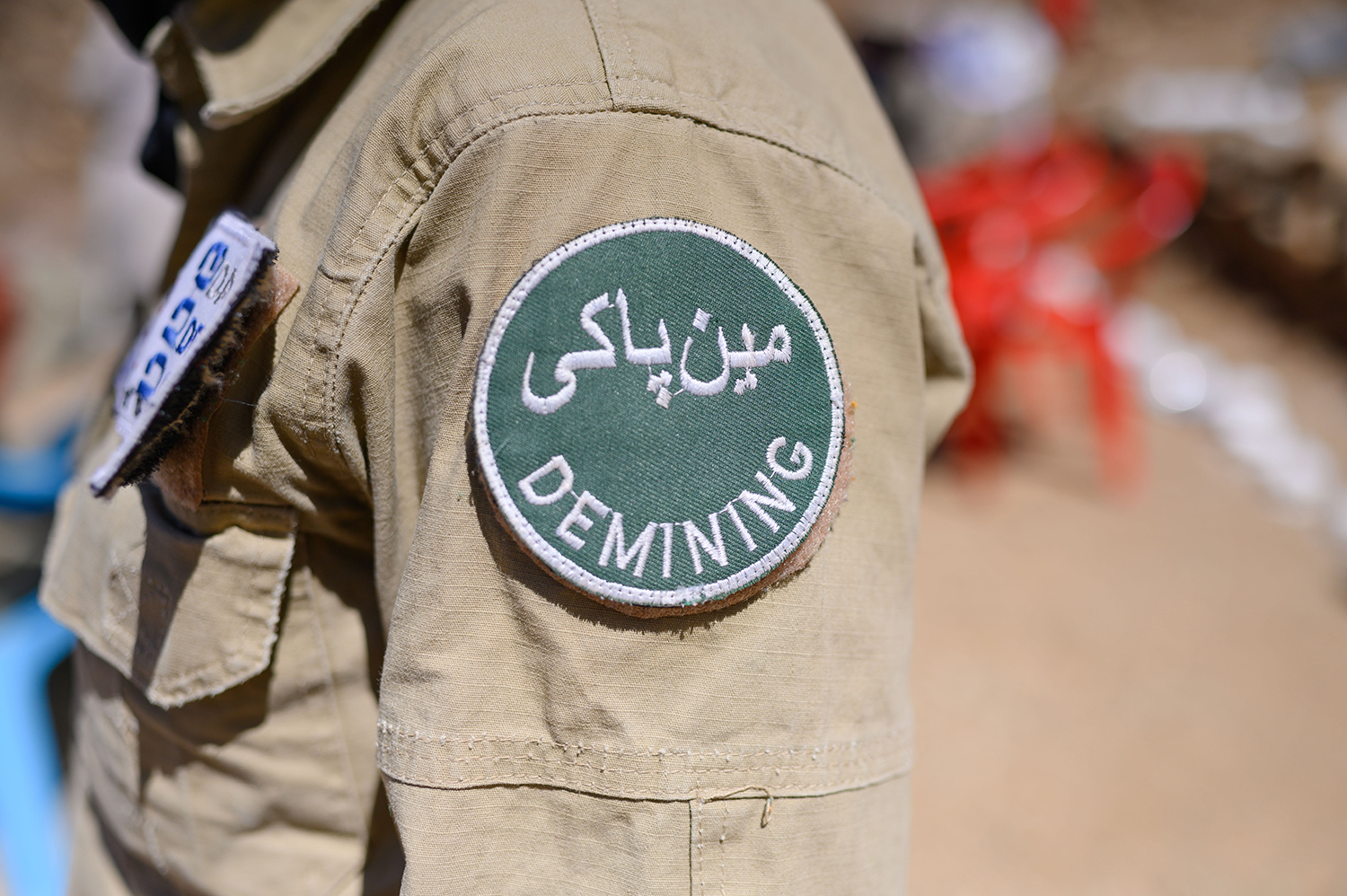 The uniform of the demining crew on Sept. 18. 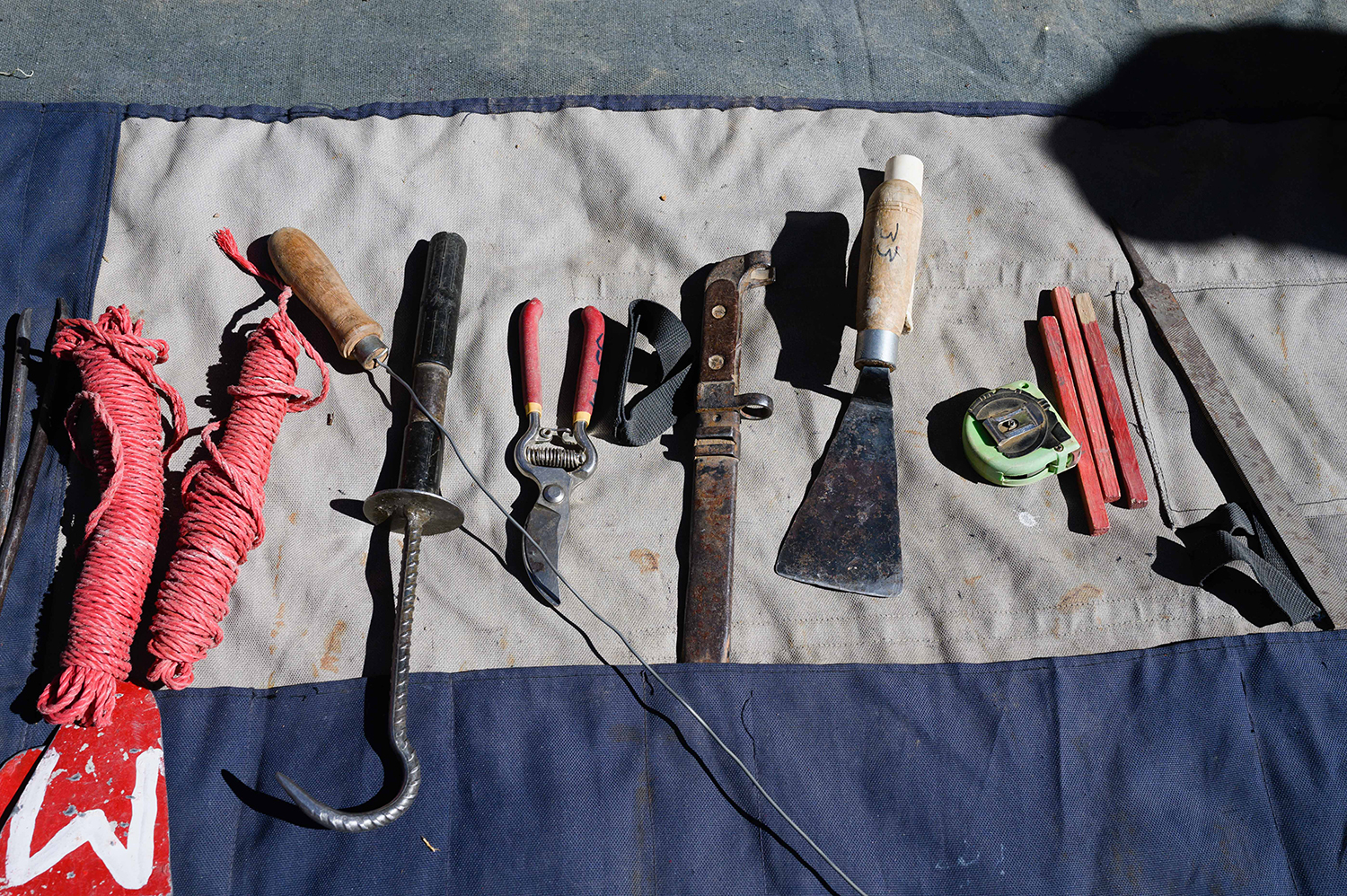 Demining tools used by the women for locating and digging out landmines and unexploded ordnance in Bamiyan on Sept. 18.

Anti-personnel mines are often designed to maim, rather than to kill. The calculus is grimly pragmatic: If a soldier is killed, the mine has removed only one enemy from the battlefield. If merely injured, they require the help of other soldiers to evacuate them, effectively removing multiple combatants from the battlefield with a single explosion.

However, when working in such close proximity to the devices—as these women do—a mine can easily be deadly.

For protection against a potential blast, the women are issued with standard demining safety equipment. A thick Kevlar vest, oppressively hot in the midday sun, protects the torso, neck, and groin. A shatterproof polycarbonate visor is worn to shield the face. No protection is worn for hands or feet, and the majority of women wear nothing more than simple gardening gloves and sneakers in addition to their standard-issue demining jumpsuits. Even with protective equipment, injury is very likely in the event of an unintentional detonation. Although no members of the female team have yet been injured, two male deminers were killed in Bamiyan while clearing mines earlier this year.

Thanks in part to their and the women’s efforts, the U.N. estimates that by late October Bamiyan will be declared officially clear of land mines and other unexploded ordnance. All formerly contaminated land will be returned to the community, and the majority of it to be used for Bamiyan’s main industry: agriculture. 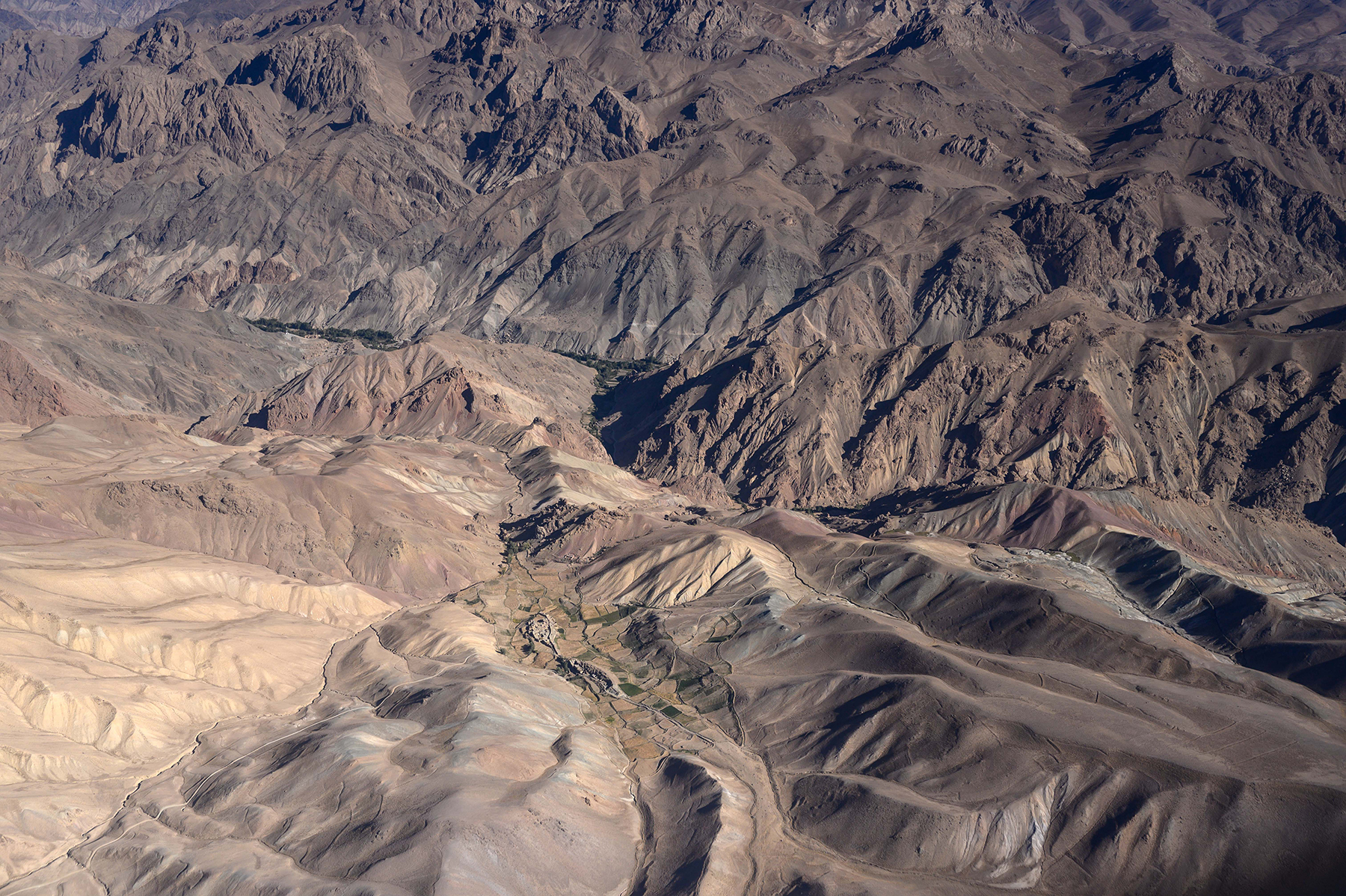 An aerial view of Bamiyan’s many valleys on Sept. 18. Kern Hendricks for Foreign Policy

With the clearance of their home province nearing completion, members of the demining team will soon leave their position in the minefield for a safer role: traveling to other provinces where they will draw on their expertise to train new groups of female deminers across the country.

Although this female demining team has been overwhelmingly successful, it represents just one small step in a cultural shift that may take years to spread to more traditional and conservative parts of the country. Atayee acknowledged that most of the country is far behind her native Bamiyan where women’s progress is concerned. “In some of these places they still don’t even let their women go outside,” she said.

To date, 40 women have been trained as deminers, and the U.N. Mine Action Service plans to increase the scope and scale of the program in coming years. For the moment, though, the potential to expand the program is limited by Afghanistan’s increasingly poor security situation. Although voting in the country’s recent national election is complete—voter turnout was less than 25 percent—many observers predict more violence stemming from accusations of ballot-stuffing and impropriety against multiple candidates.

Back in the rocky hills of Bamiyan, Marfat is able to safely unearth her dangerous discovery. She is well trained, and she works with confidence. This will not be the last mine she uncovers. For Marfat and her fellow deminers, the job is far from over. Soon, new provinces await. Despite the inevitable challenges ahead, she remains sanguine about her current occupation. “We’re happy to be setting an example for other women in Afghanistan,” she said, “and we’re proud to be working alongside the men as equals.”

Kern Hendricks is a journalist and photographer based in Kabul. Twitter: @kernhendricks