I Was a Model Uighur. China Took My Family Anyway.

Beijing says it’s releasing people from the camps. So where are my parents?

After more than a year of denial that they even existed, the Chinese Communist Party at last admitted, last fall, that it was holding people in camps in Xinjiang. It describes these as “reeducation” camps focused on potential terrorists or job training and takes carefully selected groups on Potemkin tours to visit them. In July, an official claimed that “most people” had been released from the camps.

If most people have been released, then I would like to ask China this question: Where are my parents?

My father’s name is Abdurashid Tohti—rendered into Chinese as 阿布都热西提 托胡提. (Even our names do not fit easily into the Chinese language.) My mother’s name is Tajigul Kadir, or 塔吉古丽 卡迪尔. I’m giving their names in Chinese so that the authorities can be certain whom I’m talking about. I would not want there to be any error. My father is 54 years old and owns an auto business; my mother is a 50-year-old housewife. Neither of them are terrorists or extremists or in need of reeducation to do the work they have done successfully for decades. They were snatched from their home at No. 035, Saybag Town, Shufu, Xinjiang.

They have been missing for more than two years. My brothers have been taken, too: Ametjan Abdurashid (艾麦提江 阿布都热西提) and Muhamed Ali Abdurashid (麦麦提艾力 阿布都热西提). As it happens, I have Muhamed’s national ID number, in case that helps the authorities find him. It is 653121199003261233.

We are not a family of radicals, although we love our land and our language. As a student, I followed the path that the Communist Party had laid down for me—the one that model Uighurs were supposed to walk. I attended the prestigious Minorities University in Beijing as a graduate student. I worked in Chinese offices and had Chinese friends. I learned how to speak Chinese—and English. My dress and my face set me apart from my classmates, but I did well enough to receive a scholarship to study in Turkey. That achievement may have helped condemn my family.

For Han Chinese families, studying abroad is considered an achievement, one that shows you have the money and reach to get the best for your children. For Uighurs, it was always riskier. While it became easier and easier for Han Chinese to get passports, the gates began to close for us. I left in February 2014, just two years before the Chinese authorities started confiscating passports from almost all Uighurs. 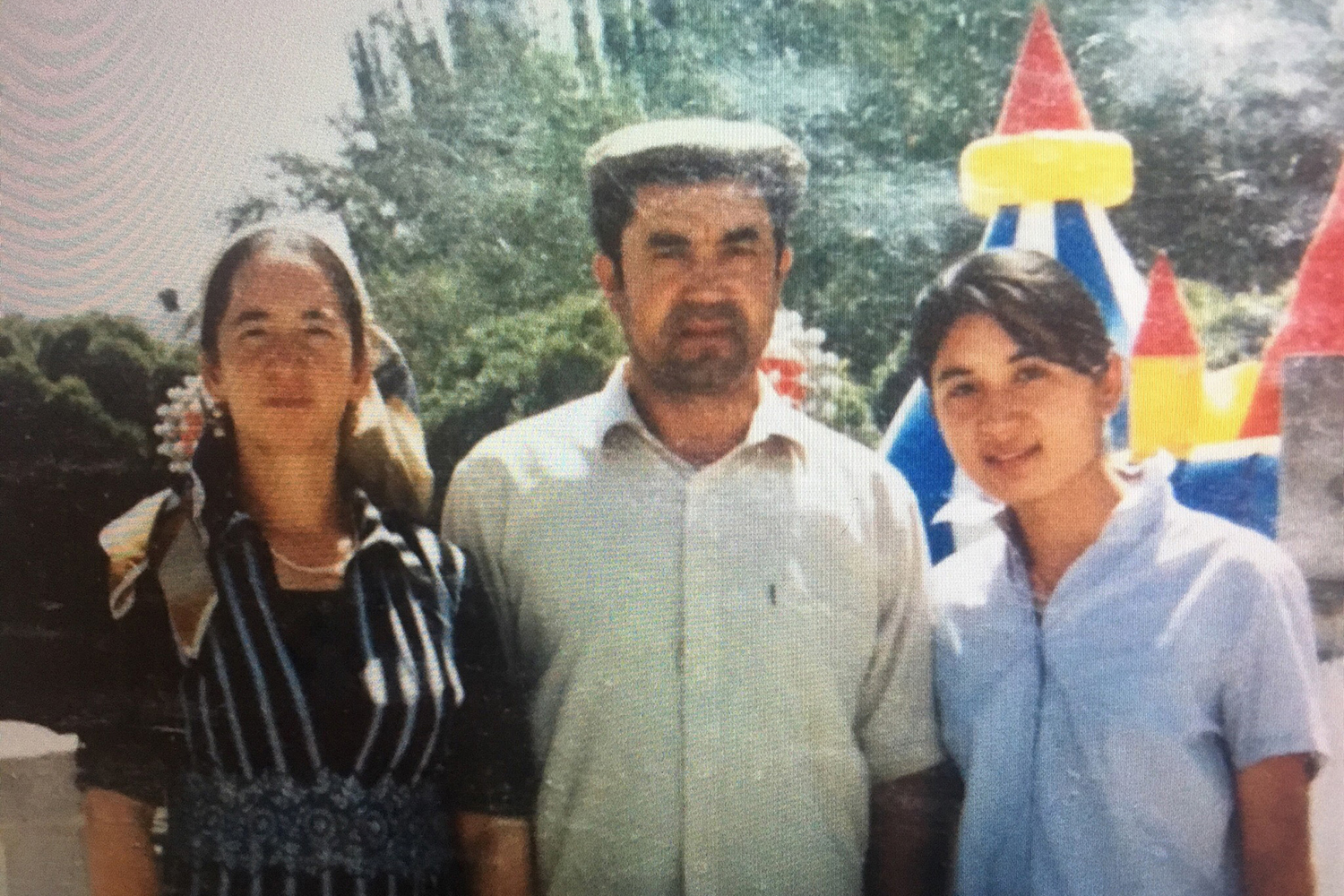 Nur Iman with her mother and father during a summer vacation to Kashgar, Xinjiang, in 2002.Courtesy of Nur Iman

As the crackdown deepened in Xinjiang, the diaspora became a source of cultural and political survival for Uighurs. But for Beijing, our efforts to keep our people alive were a threat. In an increasingly paranoid political environment, any contact with the outside world, whether that was Kazakhstan, Turkey, or the United States, became a sign of deviance or support for independence. The very scholarship that the Chinese government had sent me on put me—and everyone in my family—in danger from the same government.

The last time I spoke to them was on June 18, 2017, when I called them from Turkey. After we talked on the phone, I was speaking with my niece when the line went dead. I was fearful because there were already stories circulating of the police warning people against receiving international phone calls.

I had been calling them every day. When I tried them again, on June 20, my father’s number was dead. I tried my brother’s—the same. Finally, I tried my mother. The phone rang, but no one answered. I kept calling.

Eventually I reached my uncle’s family. They warned me not to call again—the police were already coming round threatening people who received international calls, more severely this time. By July, I learned, through roundabout means, that my brothers and my father had been taken to a detention center in the village. It became harder and harder to reach anyone in Xinjiang, and information became scarcer. It wasn’t until February 2018 that I was able to confirm that there was nobody left in my house. My father, mother, and brothers had all been taken to the camps.

I was not alone. Almost every family had a relative in the camps. Previously, if innocent people were taken to prison, there was some hope they would be released—either through the grinding cogs of the system or through personal influence. But the numbers now were overwhelming.

I received threats and pressure from the authorities to return. But I knew from the experience of others that doing so would simply mean me being sent to the camps, too. Having been abroad was even more suspicious, in the eyes of the state, than communicating with the outside world. Instead, I came to the United States, where I and other Uighurs are working to draw attention to our families’ plight. Thousands of individual accounts have been collected, but they are a drop in the bucket of the numbers taken. Even relatives abroad are often frightened to talk.

Today, some people have been released from the camps. But many of them are simply being shunted into other forms of imprisonment, from forced labor to the regular prison system, where numbers have also swollen grotesquely amid the crackdown. Rumors swirl every day among the Uighur community of worse.

But now China says people are being released. If that is so, I ask again.

Where are my parents?

Nur Iman is a Uighur scholar now living in the United States.

The Capital of Xinjiang Is Now in Turkey

Ethnic cleansing of Uighurs in China has forced an exodus to Istanbul—and a desperate effort to keep their culture alive.

Muslim Leaders Are Betraying the Uighurs

The Trump administration has done more for the millions in camps than any Islamic leader.

America Needs to Prosecute Its Presidents