One Belt, One South Asia?

Why Xi Jinping is meeting the leaders of Pakistan, India, and Nepal this week.

Chinese President Xi Jinping has South Asia on his mind this week. After welcoming Pakistani Prime Minister Imran Khan in Beijing on Tuesday, Xi is scheduled to visit India and Nepal to discuss trade, infrastructure, and regional foreign-policy issues.

The bilateral meetings come right after Beijing’s celebrations last week of 70 years of Chinese Communist Party rule, as well as last month’s global gathering at the United Nations. Let’s run through the issues at stake.

Pakistani proposals. Khan’s visit to Beijing marks his third to the Chinese capital in a year. The Pakistani leader is meeting not only Xi and Premier Li Keqiang but also several top business leaders as he seeks to shore up his country’s finances. Pakistan has been one of the biggest recipients of China’s Belt and Road Initiative in recent years, but those infrastructure projects are slowing down: Bloomberg reports that Chinese foreign direct investment into Pakistan has declined by 77 percent in the last fiscal year.

Khan is also expected to raise the issue of Kashmir as he continues to rally allies against India’s Aug. 5 decision to downgrade Indian-administered Kashmir’s status, revoking many of its autonomies. (Sen. Elizabeth Warren last week became the second U.S. presidential candidate, after Sen. Bernie Sanders, to express concern about a communications blackout in Kashmir.)

India summit. On Friday and Saturday, Xi will visit the Indian seaside town of Mamallapuram for a “second informal summit” after a similar meeting with Indian Prime Minister Narendra Modi in Wuhan, China, last year. While the Wuhan summit was marked by hope and cooperation, the tone of this year’s meeting seems more uncertain. Indian security analysts have noted that it is unusual that Chinese Foreign Minister Wang Yi has not visited India to oversee arrangements for the visit. And the meetings come as Chinese leaders, including Wang, have supported Pakistan over India on the issue of Kashmir.

Khan’s visit to Beijing will be closely watched in New Delhi, with Indian officials mindful of China’s recent agreement to send its cutting-edge J-16 fighter jets to train Pakistan’s air forces. India was also miffed this month when it was refused permission to celebrate Mahatma Gandhi’s birth anniversary at a public park in Beijing. China has its frustrations with India, too, from recent Indian military exercises along its borders to the upgrading of the U.S.-Japan-Australia-India “Quad” alliance to a ministerial level.

After concluding his business in India, Xi will fly to Kathmandu—the first visit to Nepal by a Chinese president in 23 years.

Trade rules. Neither India nor China has formally announced the Modi-Xi meeting in Mamallapuram, although New Delhi has opened registration to the summit for foreign journalists. The uncertainty hanging over the meeting, as well as the fact that Xi will be in India for only 24 hours, suggests that big trade or security breakthroughs are unlikely. But as shown below, China’s exports to every South Asian country far exceed the value of imports from those places—a trade imbalance that India, at least, has been trying to address. 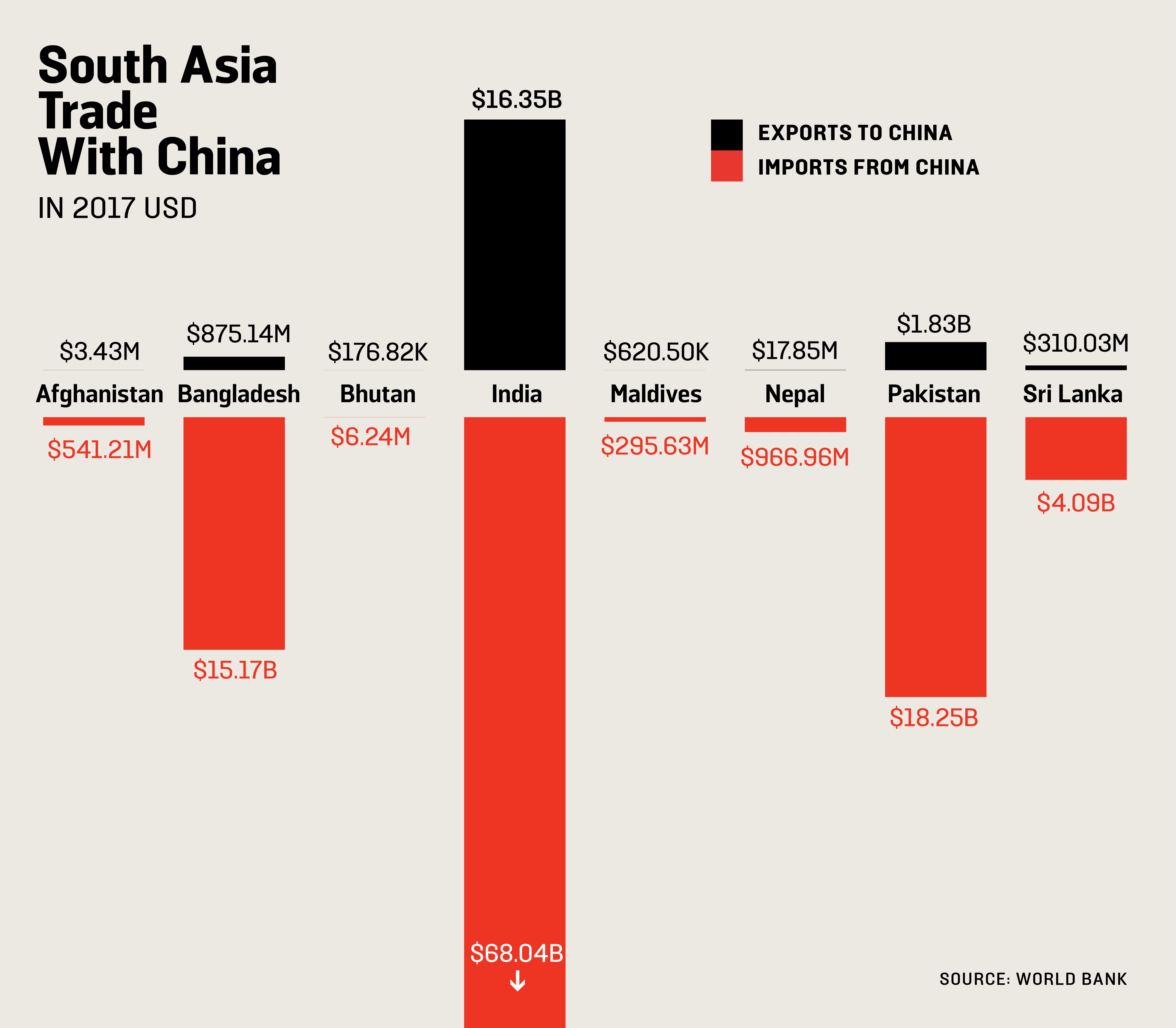 Sirisena stands down. Sri Lankan President Maithripala Sirisena has announced he will not seek reelection when his country heads to the polls next month. Sirisena created a political crisis last year when he sacked his prime minister, appointed a new one (former President Mahinda Rajapaksa), dissolved Parliament when Rajapaksa wasn’t able to form a coalition, and called for a new vote—all in an apparently failed effort to build up a base for the coming elections. Rajapaksa won’t be running either, but two of his brothers are among as many as 41 candidates on the ballot.

A vote with no confidence. A week after Afghanistan’s presidential election, the country is no closer to knowing whether incumbent President Ashraf Ghani or his coalition partner Abdullah Abdullah will lead the country—and both say they would not be open to a power-sharing agreement this time. Meanwhile, the country’s security situation remains worrying. On Monday, a suicide bomber targeting Afghan security force recruits killed at least 10 people in Jalalabad, and over the weekend 11 Taliban commanders were freed from a prison in Bagram as part of an exchange. Reuters reports that Taliban officials held an informal meeting in Islamabad last week with U.S. envoy Zalmay Khalilzad—the first known contact since U.S. President Donald Trump abruptly called off talks last month.

Fast friends? On Saturday, the leaders of two of South Asia’s biggest economies met in New Delhi. Bangladeshi Prime Minister Sheikh Hasina and Indian Prime Minister Narendra Modi signed agreements on several issues, including a coastal surveillance system, a new credit line for Bangladesh, cultural and educational exchanges, and India’s withdrawal of water from the Feni River. They also inaugurated two joint institutes and made a pact for India to import liquefied petroleum gas. The agreements come as Bangladesh has avoided taking sides in the latest flare-up between India and Pakistan over Kashmir.

Nepal’s ex-Parliament speaker arrested. On Tuesday, Nepal was rocked by the arrest of Krishna Bahadur Mahara, the former speaker of Parliament, whom a female staff member has accused of rape. Mahara, who disputes the charge, was a major figure in the Maoist insurgency against the government between 1996 and 2006 and played a leading role in the peace talks that ended the conflict. It is rare for public figures in Nepal to face such allegations, despite the fact that sexual violence is persistent. According to the United Nations, 25 percent of women in the country will face sexual violence in their lifetime.

In early October, Indian Prime Minister Narendra Modi banned the export of onions in an effort to rein in soaring prices of the vegetable widely seen as a key indicator of inflation. The move is wreaking havoc among India’s neighbors. According to the New York Times, for example, onion prices in Bangladesh have soared by 700 percent in recent months.

The ban will have consequences for India, too. In 2018, it exported more than $421 million worth of onions, making it the fourth-biggest exporter in the world. Which country was the largest onion importer?

India’s slowdown. India’s central bank has cut rates for the fifth time this year, as it announced on Friday a downward revision in the country’s projected growth rate from 6.9 percent to 6.1 percent. The moves come as New Delhi announced a giant corporate tax cut last month along with moves to privatize airport operations and creaking state-run businesses.

Oyo’s coming. The Indian discount hotel chain Oyo raised $1.5 billion from investors last week—including from its own founder, Ritesh Agarwal, who told the Financial Times: “[I]f I have the opportunity to infuse capital, I must do it.” The company is now valued at $10 billion. Oyo is already India’s largest hotel chain, and it operates 1.2 million rooms in 80 countries, including in the United States, where it has 50 hotels. 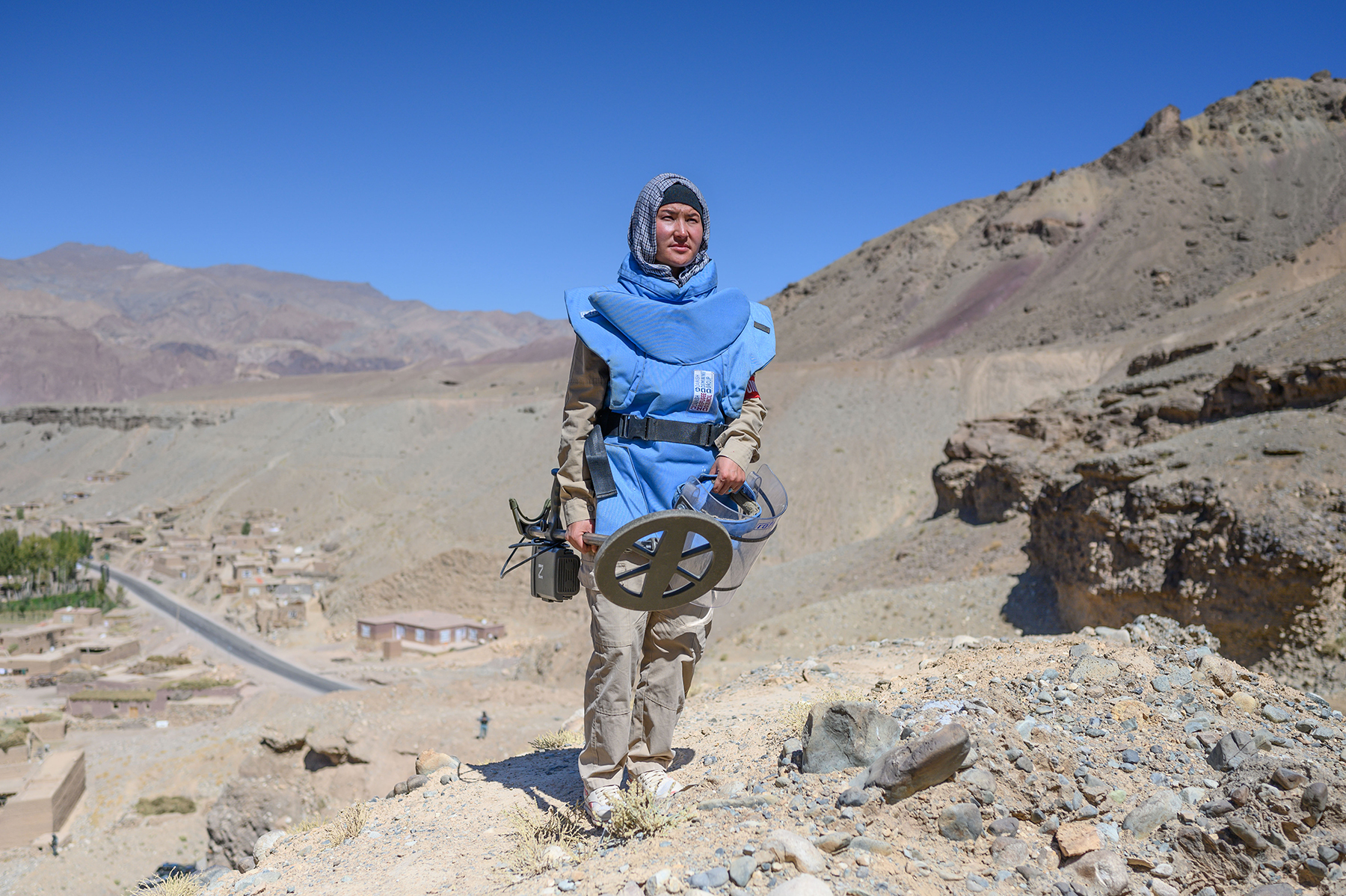 Undermining violence in Afghanistan. An all-female team is working to rid Afghanistan’s Bamiyan province of landmines. They work by hand, carefully digging out each unexploded device, most of which are decades old. Thanks to their efforts, Bamiyan will become one of the country’s first provinces to be officially declared mine-free this month. But the women aren’t done, Kern Hendricks reports for Foreign Policy. They’re already making plans to move on to the next region in need.

Royal tour. Next week, the Duke and Duchess of Cambridge—Prince William and his wife, Kate—will make a four-day visit to Pakistan. Although most of the details of the trip haven’t been released due to security concerns, the royal couple will visit Islamabad and Lahore. Their meetings in Pakistan will focus on empowering young people, especially girls, and on climate change.

B) The United States.