The Nobel Peace Prize was awarded to Ethiopian Prime Minister Abiy Ahmed in Norway on Friday morning. The Nobel committee lauded Abiy for his “efforts to achieve peace and international cooperation and for his decisive initiative to resolve the border conflict with neighbouring Eritrea.” The committee also praised him for seeking to “promote reconciliation, solidarity and social justice,” while acknowledging that “many challenges remain unresolved. Ethnic strife continues to escalate, and we have seen troubling examples of this in recent weeks and months. No doubt some people will think this year’s prize is being awarded too early,” it added. “The Norwegian Nobel committee believes it is now that Abiy Ahmed’s efforts deserve recognition and need encouragement.”

Foreign Policy has covered Abiy’s rise to power and his peacemaking efforts extensively over the past two years. In April 2018, soon after he was named prime minister, Nizar Manek profiled Abiy for FP, based on interviews with him prior to his ascent. In July 2018, Bronwyn Bruton discussed how Abiy helped thaw relations with Eritrea and negotiate with its leader Isaias Afwerki due to both leaders’ animosity toward hard-liners in the Tigrayan People’s Liberation Front, the party that had long dominated Ethiopian politics.  And Tom Gardner argued in December 2018 that Abiy is not a populist, though he often sounds like one.

But it has not all been smooth sailing for the new Nobel Laureate. In January, Florian Bieber and Wondemagegn Tadesse Goshu warned that rising ethnic tensions risked turning Ethiopia into another Yugoslavia. “Ethnic conflicts might increase in intensity and number, both as a result of a backlash by conservative forces rejecting the rapid reforms or due to the sudden liberalization of the public space,” they argued. After an alleged coup attempt against the government in June seemed to confirm that thesis, Manek cautioned that Abiy’s reforms, by allowing extreme ethnonationalist voices back into the public sphere, may have unleashed forces he can no longer control.

Who else was in the running? The Swedish climate activist Greta Thunberg had been among those favored to win; the 16-year-old would have been the youngest Nobel Peace Prize laureate, and the first recipient since 2007 recognized for their work on climate change. Other contenders included Chief Raoni Metuktire of the Kayapo tribe in Brazil, for his work to protect the Amazon rainforest and New Zealand Prime Minister Jacinda Ardern, who brought her country together after a devastating terrorist attack on a mosque in Christchurch. (Like Abiy, Ardern was on the list of FP Global Thinkers in 2019.)

What does the prize mean? The selection criteria of the Peace Prize has been questioned in recent years, as laureates often receive awards for activism or raising awareness rather than for brokering peace. (U.S. President Barack Obama received his award in 2009, shortly after his inauguration.) In 2017, there were calls for Myanmar leader Aung San Suu Kyi to have her 1991 prize withdrawn after Myanmar’s military waged an ethnic cleansing campaign against the Rohingya Muslim minority.

Literature prize controversy. The 2018 Nobel Prize for literature was not awarded last year due to sex abuse allegations among the Swedish Academy, the awarding committee. On Thursday, the prizes were awarded to Poland’s Olga Tokarczuk (2018) and Austria’s Peter Handke (2019), sparking another controversy. Handke has been accused of defending Serbian war crimes, with the Mothers of Srebrenica group demanding the prize be revoked.

Turkey continues attack on Kurds. The Turkish offensive against Kurdish groups in northern Syria continues from the air and on the ground, with hundreds reported dead, including nine civilians. Around 64,000 people have been displaced since the attack began. Meanwhile in Turkey, authorities are investigating Kurdish politicians and have arrested dozens of people for criticizing the military offensive on social media. U.S. lawmakers are preparing bipartisan legislation to sanction Turkey over the campaign. They expect a veto-proof majority, Elias Groll and Robbie Gramer report.

[U.S. military officers who fought with the SDF say they are devastated by Trump’s decision to withdraw troops from northern Syria, FP’s Lara Seligman reports.]

Hong Kong reopens ahead of weekend protests. Hong Kong’s subway system opened for the first time in a week and the city’s legislature held its first session since July on Friday, though anti-government protests are expected this weekend. On Thursday, Apple removed an app that Hong Kong’s protesters were using to track police movements from its app store after the company was criticized by Chinese state media. CEO Tim Cook defended the move, which critics say was the latest corporate capitulation to Chinese pressure.

Can the U.S. and China reach a (small) deal? U.S. President Donald Trump will meet Chinese Vice Premier Liu He at the White House today as U.S.-China trade negotiations continue for a second and final day. Trump said Thursday’s talks went “very well,” and both sides have sent signals that they could reach a limited agreement on some issues today—though they remain far from a complete deal.

Ecuador’s protest tactics. On Thursday, indigenous protest leaders in Ecuador escalated their tactics, capturing eight police officers and bringing them before a crowd. The move followed a day of clashes with police as protesters push back against recent government austerity measures. Ecuador’s indigenous-led demonstrations have ousted presidents before, the Washington Post reports.

Sebastian Kurz’s next move. After leading his center-right Austrian People’s Party (ÖVP) to an election win, Chancellor Sebastian Kurz is faced with a choice: to form a coalition with the Austrian Greens or another weaker partner. Kurz has a reputation to maintain, Franz-Stefan Gady argues for FP. “For now, Kurz must choose between a coalition he doesn’t want and a coalition that’s unlikely to last,” he writes.

Scarce opportunity in Kashmir. Since India revoked Kashmir’s special status and enacted a communications blackout in the state, graduates are losing opportunities. Young Kashmiris are struggling to complete their studies—and new rules around competition for the state’s civil service mean that government jobs are scarce, Yashraj Sharma reports for FP.

Tunisia returns to the polls on Sunday for its presidential runoff election. Kais Saied, an independent, will face Nabil Karoui, a media mogul released from prison on Wednesday after weeks of detention—which threatened the election’s credibility. The winner will be the country’s second democratically-elected president.

Hungary’s opposition could win big in Budapest’s mayoral election on Sunday in what appears to be a tight race. While Prime Minister Viktor Orban isn’t up for re-election until 2022, an opposition victory on Sunday could reveal weakened support for the right-wing leader in the capital.

Poland holds parliamentary elections on Sunday, and the ruling Law and Justice Party is almost certain to win. If Poland’s opposition wants to defeat the populists, it needs to offer an alternative welfare state model, Slawomir Sierakowski writes in FP.

The Migrants Left to Die in Libya 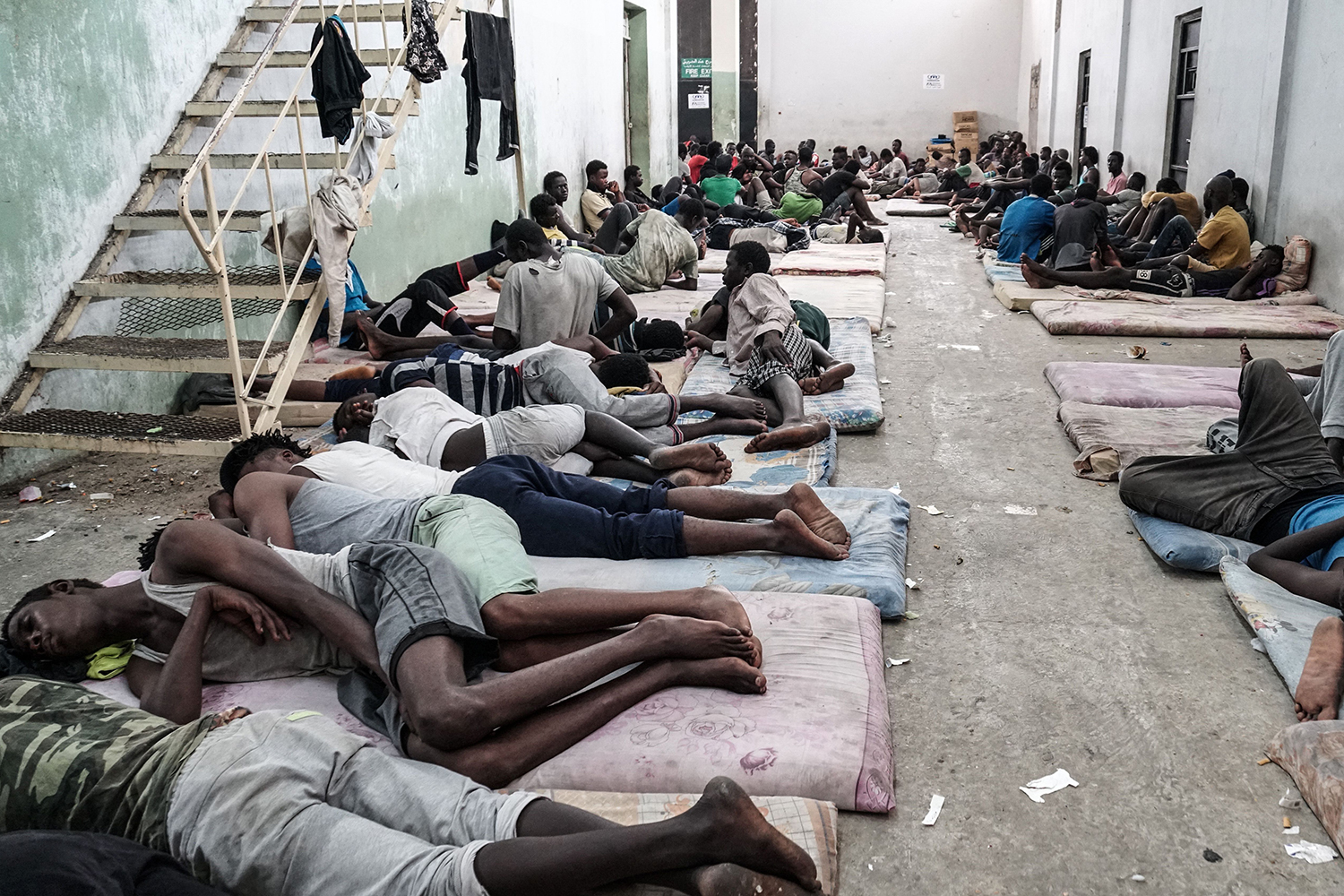 Migrants at a detention center in Zawiyah, west of Tripoli, on June 17, 2017. TAHA JAWASHI/AFP/Getty Images

For the past two and half years, tens of thousands of refugees and migrants have been locked up in Libyan detention centers after being intercepted in the Mediterranean Sea by the EU-supported Libyan coast guard. While the detention centers are ostensibly run by the Libyan state, many are really controlled by militias.

Inside, many migrants become victims of sexual assault, forced labor, torture, and murder. Aid officials say that the EU deal with Libya means that the U.N. agencies receiving funding to provide aid to detained migrants are instead sanitizing a system of abuse, Sally Hayden reports for FP.

Later today on FP’s podcast, First Person: Hayden has covered the refugee crisis since it began, and the migrants have followed her—reaching out on WhatsApp and Telegram. She speaks with deputy editor Sarah Wildman about how she became a point of contact for migrants trapped in Libya.

Authorities in Hanoi, Vietnam, have closed a narrow railway corridor in the city’s center that is popular as a photo-op for tourists, due to safety concerns. Trains rattle through daily. The move has drawn ire from tourists and nearby shop owners, who worry it will hurt their business.