Iraq Confronts Its Own Prisoner’s Dilemma

New survey data shows that Iraqis are deeply divided on how to punish members of the terrorist group.

With Turkish strikes on northern Syria underway, fears about the potential release of Islamic State fighters held in makeshift prisons there have grown. But as observers focus on Syria, the fate of fighters in Iraq may be more pressing. Indeed, a huge number of Islamic State members currently behind bars are Iraqi nationals. And Iraqi government policy toward them will have a direct effect on the Islamic State’s behavior, its support among the local population, and, as a result, the long-term stability of the country.

To evaluate public perceptions of how the Iraqi government is treating the detainees, we conducted a survey of 400 civilians in Mosul, many of whom had been victimized by the Islamic State, as well as 200 people living in camps outside of the city with family members with declared affiliations with the Islamic State. The survey took place between December 2018 and January.

The first set of questions dealt with who should even count as an Islamic State supporter. Both civilians from Mosul and people with Islamic State affiliations agreed that the group’s leadership and fighters should be prosecuted. That makes sense. Both groups of people surveyed see themselves as victims of Islamic State leaders, although for different reasons. Mosul civilians blame them for the brutal treatment of civilians. Meanwhile, those with family affiliations blame leaders for failed policies leading to the group’s defeat. One Islamic State member we interviewed said that “group leadership promised us victory and paradise, but it was so far from the reality we saw in the organization.”

How Should Islamic State Noncombatants Be Punished? 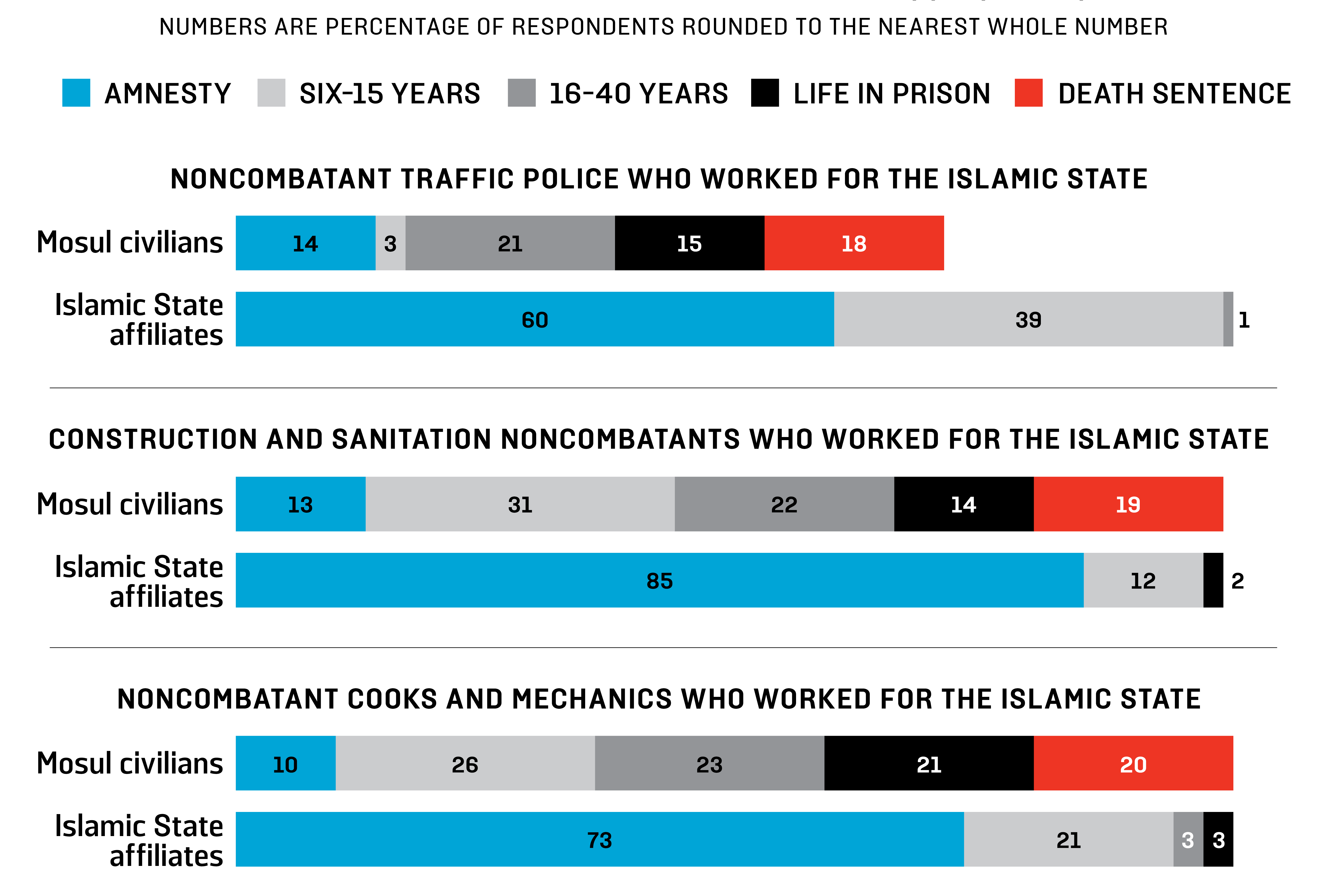 What Mosul civilians and those with family members in the Islamic State disagreed about most was Islamic State supporters who didn’t take up arms, and those with civilian roles in the organization, such as construction, mechanical, and traffic police jobs. Not surprisingly, the Mosul civilians prefer to treat such noncombatants as members of Islamic State who deserve punishment, while the families would prefer more leniency. According to an interviewee with Islamic State affiliations, “ordinary civilians in Mosul consider ISIS supporters to be everyone who ever uttered a word in support of ISIS. Because they were never inside the organization, they do not understand the different roles played by civilians and fighters in ISIS.” He went on to say that “sometimes you could not blame civilians for not distinguishing fighters and civilian employees because ISIS basically made them all fight once the battle for Mosul started, but it was not their choice.” In response, one civilian from Mosul said, “Why should we distinguish between those who want to kill us? They are all the same. It was even visible after the battle when they were still calling us apostates.”

The second major point of disagreement is the type of punishment that is appropriate for membership in the Islamic State and, in particular, preferences for and against capital punishment. (According to Iraqi counterterrorism law, some Islamic State fighters are sentenced to death and others left to spend their lives behind bars.)

How Should Islamic State Fighters Be Punished?

Civilians are far more supportive of the death penalty. 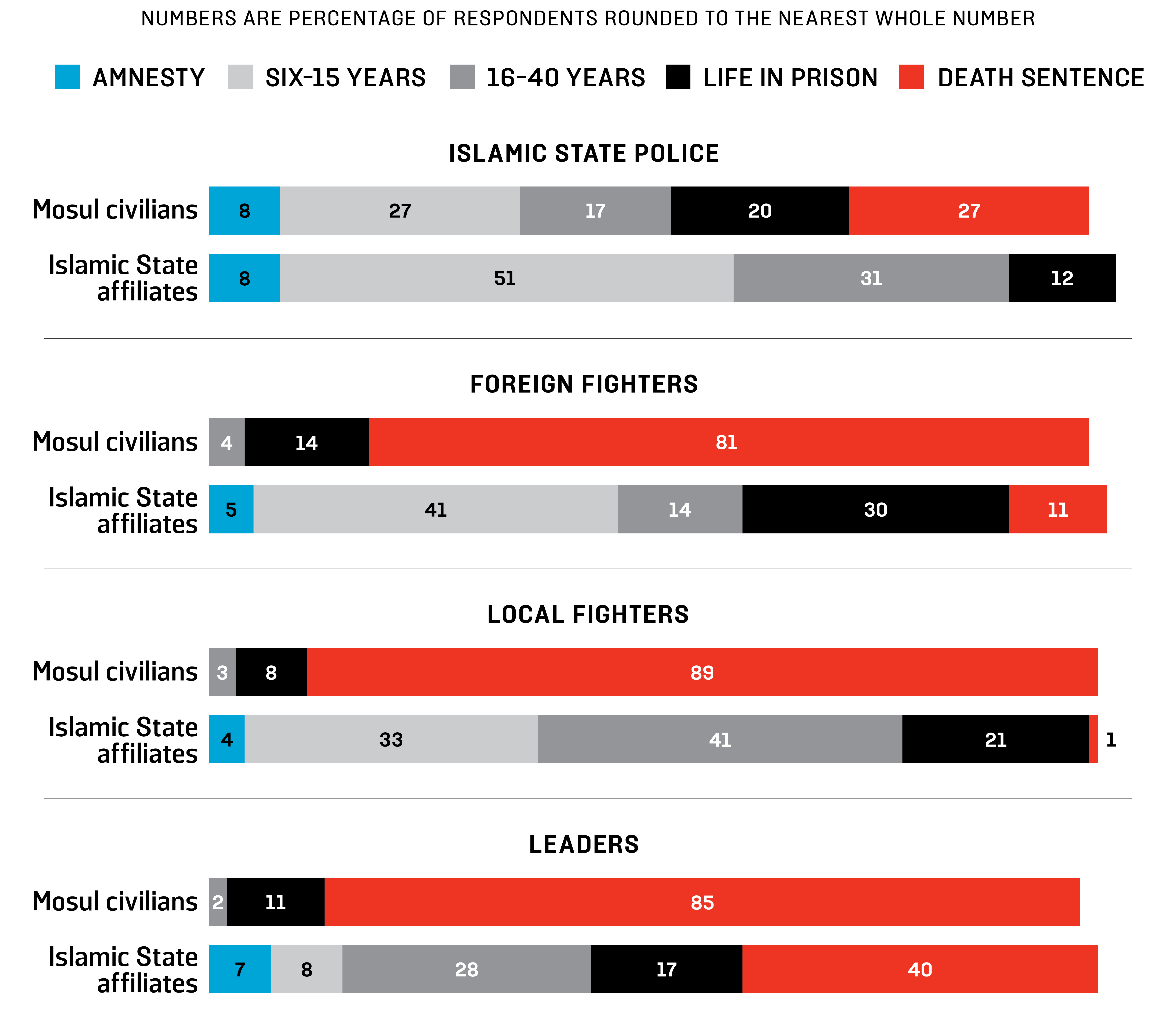 This divergence of opinion is especially clear on the issue of foreign versus domestic fighters. For example, very few people with family affiliations favored the death penalty for Iraqi members of the Islamic State. A slightly higher 11 percent believed that foreign fighters should be subject to it. Instead, they tended to favor a range of less draconian punishments, with a plurality leaning toward a medium prison sentence of 16 to 40 years. In other words, they saw some prospect for rehabilitation. By contrast, almost 90 percent of Mosul civilians believed that Iraqi Islamic State fighters should be executed, with slightly fewer wanting the same for foreign fighters. One reason for that difference could be that some Mosul civilians care more about Iraq’s image abroad and do not want to see their country executing foreigners.

Civilians’ overall high support for the death penalty makes intuitive sense. According to someone who had been harmed by the Islamic State, “ISIS killed so many people that executing their members is the only right way to punish them.” Other Mosul civilians believed that capital punishment would have strategic value: eliminating ideologues who might pose a future threat and deterring others from joining or rejoining terrorist groups.

Trump’s green light for Turkey’s assault on the Kurds is appalling. But he’s not the only one to blame.

After 15 years of corruption, Iraqi protesters have finally reached a breaking point. Some even want military rule.

In Iraq, Protesters Are Sick of Corruption and Foreign Influence

The firing of a wildly popular general who led the fight against ISIS has set off demonstrations that could threaten the country’s stability.

But for those with affiliations with the Islamic State, capital punishment was seen as certain to backfire. The punishment, for example, provides no reason for Islamic State fighters to surrender; if they did, not only they would be killed, but, before that, they would likely be tortured and humiliated. Better, then, to fight until the last breath, including through suicide missions, against all possible targets. That’s something some Iraqi justices tend to worry about, too. In an interview, one counterterrorism judge said, “I try to not give death sentences to ISIS, but life sentence instead. Although I know that it will be most likely turned to a death sentence on appeal, I still do it for my own safely.”

To get Islamic State members to surrender, affiliates believed that Iraqi counterterrorism law should be changed first—the death penalty should be abolished and prison sentences reduced. They also believe conditions in prison should improve and torture be eliminated. But those changes are not likely to happen in Iraq in the near future, because any politician proposing as much would be accused of being weak on terrorism, if not of being directly denounced as an Islamic State supporter.

What Should Islamic State Members Be Offered in Return for Surrender? 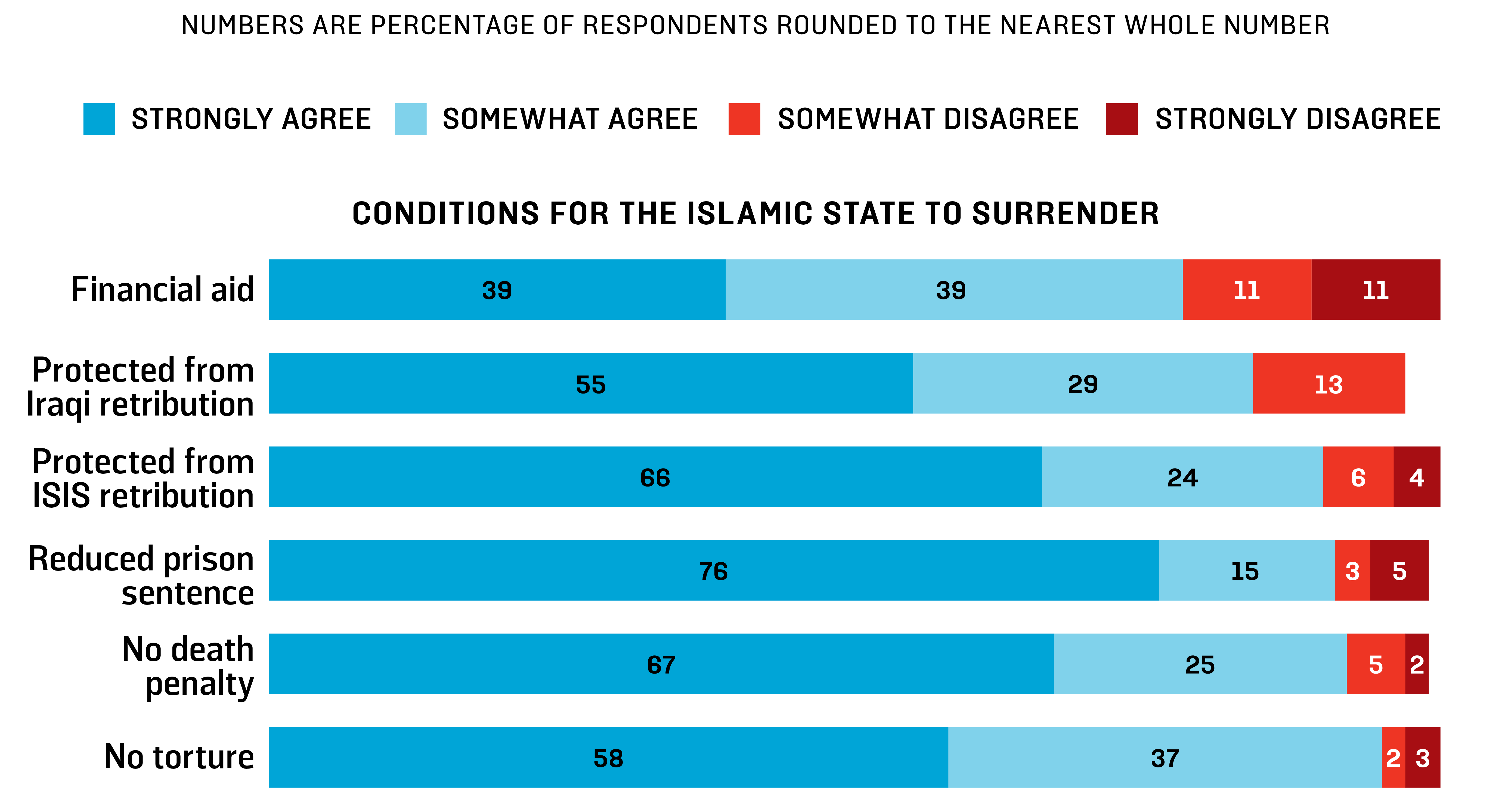 The issue of prosecuting Islamic State members is splitting Iraqi society apart. And that split could turn violent, because, according to our survey, both Islamic State supporters and government supporters are ready to resort to violence. Indeed, large majorities of both Mosul civilians and Islamic State affiliates agree that the will of the people is more important than the rule of law and consider it justifiable to take up weapons to support the causes they see as just.

For now, Mosul civilians see Iraqi courts as being on their side and, as a result, support them. Judge Raed al-Maslah from the Tal Kayf counterterrorism court, the main Iraqi court processing local Iraqi Islamic State members, commented in an interview, “People who suffered under ISIS thank judges after they sentence someone to death, and people who are sitting and waiting in court hallway shout ‘Hurray to the law!’ when death sentences are being announced.”

How Important Is the Rule of Law?

RIslamic State affiliates and supporters believe that both sometimes get in the way of justice.

Yet if the courts were to move away from capital punishment, ordinary Mosul civilians could resort to extrajudicial killings to satisfy desire for revenge and retribution. For example, according to our survey, 40 percent of Mosul civilians believe that if a civilian kills an Islamic State affiliate on the street, the civilian should not be punished at all. Thirty-four percent thought that only a short prison sentence would be merited as punishment for killing someone who worked or fought for the group.

On the other side, 76 percent of people with Islamic State affiliations said that they have no trust in government counterterrorism courts. Even proposed reforms of the current judicial processes—for example, by allowing Islamic State detainees access to independent lawyers or requiring higher quality of evidence for conviction—would not change their opinion about unfairness in the Iraqi justice system. Instead, many affiliates prefer for fighters to be held accountable under an entirely different system of justice, for example one based on sharia. Distrust extends beyond the courts; affiliates are also deeply suspicious of the local government in Mosul and central government in Baghdad. Although the Islamic State remains too weak to conduct major operations against the Iraqi government at present, there’s compelling evidence that Islamic State affiliates would support a renewed insurgency.

In order to ensure Iraq’s long-term stability, politicians, lawmakers, and their policy advisors should look at how Iraqi constituencies view the country’s counterterrorism laws and prosecution of Islamic State detainees. It is worth remembering that the Islamic State governed Mosul for several years, employing thousands of ordinary Iraqis in a variety of functions, many in mundane administrative capacities. Affiliates who remain inside and around Mosul are aggrieved by the harsh detention and prosecution of their friends and family members, and they could revert to violence. At the very least, it is time for the country to review its counterterrorism laws, which were installed in Iraq in 2004, when al Qaeda was the real insurgent threat. Unlike al Qaeda, the Islamic State may have greater support lingering within the local population. The battle against it was more like a civil war. Harsh punishment of detainees may have the unintended consequence of remobilizing insurgent forces.

Finally, the Iraqi government should do more to provide for the welfare and security of Islamic State affiliates and family members, to build trust, ease tensions, and promote rehabilitation and reconciliation over revenge and retribution in order to break the cycle of violence in the region.

Trump’s green light for Turkey’s assault on the Kurds is appalling. But he’s not the only one to blame.

After 15 years of corruption, Iraqi protesters have finally reached a breaking point. Some even want military rule.

In Iraq, Protesters Are Sick of Corruption and Foreign Influence

The firing of a wildly popular general who led the fight against ISIS has set off demonstrations that could threaten the country’s stability.