The country is making the transition from net importer of ideas to net innovator, and as it does, it is finding that good patent laws matter.

Speculation about the on-and-off U.S.-Chinese trade talks centers on whether the two sides will eventually settle for a truce or push for a “complete deal,” which U.S. President Donald Trump remains adamant he will obtain. Any grand bargain will require progress on a key structural issue: intellectual property (IP) rights. According to some reports, Chinese IP theft has cost the United States $225 billion to $600 billion a year. No wonder, then, that getting China to better protect IP is a point of rare consensus among both the White House and the Democratic leadership.

But history tells us to be cautious; Washington’s demands are unrealistic. Countries do not enact strong IP rights systems until their ability to innovate at home displaces reliance on outside knowledge. The United States’ own centurylong drift toward strong protections is a case in point.

Economists see the accumulation and dissemination of knowledge as key to sustainable economic growth. That is true for both developing and developed economies, although they differ greatly in their abilities to generate innovation. It is only natural, then, that developing countries would primarily seek to upgrade their stocks of knowledge and technology through acquisition rather than invention. China and others see such efforts as vital to evading the middle-income trap.

It is easy to dismiss “acquisition” as a euphemism for theft. But in reality, trade, foreign investment, licensing, international research collaboration, cross-border movement of experts, collection of open-source material, imitation, reverse engineering, and, yes, theft have all contributed to China’s technological progress. Most of these activities are legitimate and voluntary and have clearly benefited U.S. business interests.

Yet observers tend to lose sight of the broader picture and single out the illegitimate and questionable methods. Beyond stealing IP, in some sectors China is accused of demanding technology transfers in exchange for market access by requiring foreign investors to form joint ventures with Chinese firms. Although China denies any coercion (after all, foreign firms can simply walk away), many foreign firms feel that the sheer size and attractiveness of the Chinese market give domestic firms excessive bargaining power.

The significance of this particular issue is exaggerated. For one, requiring joint ventures is by no means unique to China; this is a common practice in many emerging market economies. Beyond that, in the most recent US-China Business Council Member Survey, just 5 percent of respondents reported having been asked to transfer technology to China, and this concern ranked 24 out of 27 top challenges facing foreign companies. What’s more, joint ventures are increasingly less common; they now account for less than a third of China’s inbound investment compared with two-thirds in the late 1990s, and many such deals are welcomed by foreign firms to facilitate their market access. Given the declining role of such ventures in relation to the political sensitivities generated, China has made moves toward dropping the requirement, most recently in March through its new Foreign Investment Law, which provides more flexibility for foreign investors and outlaws the practice of forced technology transfer, although how this will be implemented in practice remains a concern.

In terms of outright theft of IP, China’s infractions are anything but unique: It is just one of 36 violators listed in the 2019 Special 301 Report by the Office of the U.S. Trade Representative (USTR). Historically, rapidly growing emerging market economies tend to be cited as they transition to higher income levels. For example, decades ago Japan, South Korea, and Taiwan were each perennial Section 301 violators until they reached a per capita GDP of about $20,000-$25,000. Many countries have followed this blueprint, but China draws special attention because of its size and its top-down, state-led model.

It is in society’s interest to support the broad dissemination of knowledge, but the creation of knowledge requires incentives to innovate. When determining appropriate rules for IP, governments have to keep in mind that protections simultaneously spur creativity and inhibit the flow of knowledge. To find the right tradeoff, they must take stock of their country’s innovative capacity, consider international norms and standards, weigh wide access to knowledge against incentives to invent, and seek common ground between the short-run interests of firms and the long-run interests of society as a whole. As a country evolves from a net acquirer of IP to a net innovator, its calculations change, and strong protections are more attractive. 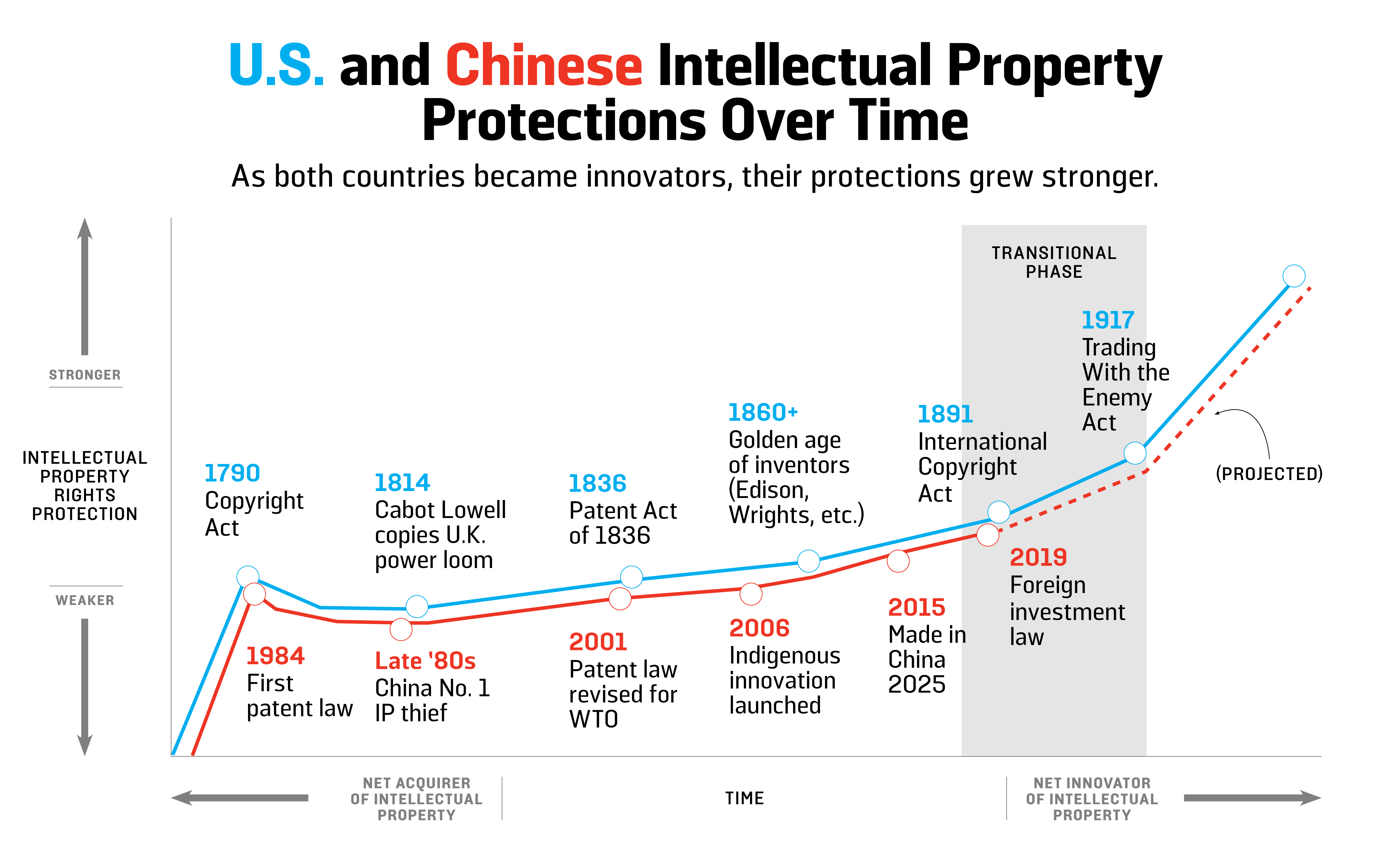 From 21st-century America’s perspective at the technological vanguard, it appears natural that China should be pressured to adhere to higher standards. But there are lessons to be gleaned from America’s own humble (and not so innocent) beginnings.

Its own IP rights system began with the Copyright Act of 1790, which explicitly did not grant any protections to foreign works, stating, “Nothing in this Act shall be construed to extend to prohibit the importation or vending, reprinting or publishing within the United States, of any map, chart, book or books written, printed or published by any person not a citizen of the United States.” During the early days of its industrialization, the United States was a world leader in IP rights violations, a fact often overlooked in the current discourse. Most notably, the businessman Francis Cabot Lowell helped launch the United States’ industrial revolution by copying and adapting the British power loom, one of the most impactful inventions of the 19th century. Not until 1891, thirty years into the golden age of the independent American inventor and a full century into the history of U.S. IP law, did the passage of the Chace Act finally extend protections to foreigners.

What prompted the change? Throughout the 19th century, imitation played a vital role in the United States’ ascent up the value chain, a process that was deliberately aided by relatively weak protections for IP. As the country’s own innovative capacity grew, however, domestic stakeholders began to clamor for strengthening U.S. laws. During this phase, the country transitioned from a net acquirer of IP to a net innovator, which tipped the scales in favor of increased protection.

The United States’ experience demonstrates the tendency of IP rights to co-evolve with innovative capacity. But progress is not always straightforward, and U.S. actors continued to engage in ideas theft even after the country became a net innovator. For instance, by the early 20th century, the United States had fallen well behind Germany in the key chemical industry. Determined to “dislodge the hostile Hun within our gates,” the 1917 Trading With the Enemy Act granted a wartime exception to the Chace Act to permit the confiscation and sale of all enemy-owned patents to U.S. firms.

Compared with the U.S. experience, China today seems right on track. To begin with, it had no patent law prior to 1984. Notions of individual achievement—let alone legal protection for inventions—were heavily suppressed prior to the Deng Xiaoping era in ways that have continued ramifications. In the 1990s, IP theft was rampant, although Western policymakers largely ignored it when China specialized in low-end manufacturing fueled by cheap and abundant labor.

China’s revision of its patent law as part of accession into the World Trade Organization in 2001 represented a major step toward compliance with international standards. More recently, China’s efforts to promote indigenous innovation and support strategic sectors as outlined in its highly contentious Made in China 2025 program added to the pressure on domestic companies to both obtain technologies from abroad and develop domestic capacity to innovate.

Overall, China’s IP regime has made significant strides in just a few decades. For instance, China’s world leadership in patent quantity—though not in quality—signals its commitment to develop a robust innovation ecosystem at home. Minimum damage payouts for violations have continually increased, as have durations of patent protection. China even became the most litigious country in terms of the number of IP-related cases as early as 2005, and the number of cases has increased at a rate of over 40 percent per year for the past two years.

In 2014, China debuted three specialized IP courts, and there are as many as 19 more in the pipeline. And contrary to popular expectations, foreign plaintiffs have actually fared better in patent litigation in these courts than their Chinese counterparts. Even the 2016 Special 301 Report by the generally bellicose USTR noted “[w]elcome developments” and “progress toward effective protection and enforcement of IPR in China.” China now ranks second globally (excluding tax haven countries) in annual spending on acquisition of foreign IP as well as in gross research and development expenditure. In short, change is occurring at China’s own initiative, and U.S. companies have taken note: In a American Chamber of Commerce in China survey, 96 percent of respondents stated in 2018 that China’s enforcement of IP rights improved or stayed the same in the last five years compared with 86 percent in 2014.

The rattled stock market gets all the trade war attention, but it’s the sharp decline in China’s U.S. investments that should alarm Americans.

The Improbable Rise of Huawei

How did a private Chinese firm come to dominate the world’s most important emerging technology?

In spite of China’s very real progress, the United States continues pressuring the country to further improve IP protections. It also wants to levy tariffs as punishment for infractions without Beijing retaliating. Yet the lessons of history suggest that a punitive approach is misguided. A more constructive approach would involve a two-pronged strategy, built firstly on sustained efforts to improve institutions for legislating and enforcing effective IP protections while acknowledging the long-term nature of the process. The United States could also exert meaningful influence through multilateral channels by calling on allies to demand reciprocity and by pushing to strengthen the role of international arbitration courts. External pressure should play an important role, but ultimately China’s internal incentives will carry more weight.

The second prong of the strategy would address the concerns of the U.S. security establishment that seeks to slow down China’s rising innovation capacity and even decouple the two economies. Trying to slow Chinese innovation will simply weaken its incentive to strengthen IP rights. Rather than go against the grain, the United States should instead commit to working with China to foster open innovation and design knowledge transfer systems that both sides would see as fair and mutually beneficial. Many in Washington would counter that an innovative China poses a national security risk, particularly in key industries with dual-use technologies like 5G and artificial intelligence. These risks should be acknowledged, but they can be mitigated; however, Huawei and other private companies cannot be expected to overcome deep-seated trust problems on their own. The United States should compartmentalize the issue by building a collaborative regulatory framework rather than imposing blanket restrictions.

Ironically, if the West wants China to get better at protecting IP, it also needs to work with China to help it to become a more innovative nation.

Yukon Huang is a senior fellow at the Carnegie Endowment for International Peace. He is author of Cracking the China Conundrum: Why Conventional Economic Wisdom Is Wrong.

Jeremy Smith is a junior fellow at the Carnegie Endowment for International Peace.

The rattled stock market gets all the trade war attention, but it’s the sharp decline in China’s U.S. investments that should alarm Americans.

The Improbable Rise of Huawei

How did a private Chinese firm come to dominate the world’s most important emerging technology?