New Delhi is weighing retaliation against Kuala Lumpur and Ankara after recent criticism over Kashmir.

It is well known that China does not tolerate criticism, whether it comes from countries or companies. Beijing prevents Islamabad from openly discussing its persecution of Muslims in Xinjiang, just as it punishes the NBA when it comments on the ongoing unrest in Hong Kong.

India, as the world’s largest democracy with institutional checks and balances, has historically been more open to external criticism—or at least hasn’t responded to it in a particularly muscular way. But a spate of developments in the last few weeks shows that may be beginning to change.

Netflix, but not chill. One sign of New Delhi’s growing desire to control the narrative is in how it views the digital world, and India is now weighing whether to start censoring streaming platforms like Netflix and Amazon Prime Video. India can legally censor movies and TV—and along with print journalism, those sectors tend to be relatively compliant. But the country has not yet broadened its laws to apply to streaming video, where programs are often critical (at least indirectly) of India’s government, which has led to police complaints.

If the recent reports about planned increases in regulation are true, it would in fact be part of a broader trend. As more Indians have come online, mostly through cheap smartphones and cellular data plans, India has controlled internet access in places like Kashmir, executing more internet shutdowns than any other country. New Delhi has also proposed forcing companies like Google, Amazon, and Uber to keep data on their local operations stored within India—a move opposed by foreign companies with operations in India.

Sticking points with Malaysia and Turkey. India’s increasing confidence on the world stage impacts its relations with other countries as well. Last month at the U.N. General Assembly, Malaysian Prime Minister Mahathir Mohamad angered India when he tweeted that Jammu and Kashmir had been “invaded and occupied,” adding that “there may be reasons for this action but it is still wrong.” Turkish President Recep Tayyip Erdogan echoed those comments in his U.N. speech, saying that “despite the U.N. Security Council’s resolutions, 8 million people of Kashmir are stuck in Kashmir.” Around the same time, Pakistani Prime Minister Imran Khan announced that his country would partner with Malaysia and Turkey to create a “BBC type” English-language channel focused on Muslim issues and fighting Islamophobia.

New Delhi was not pleased. And now, there are signs that Prime Minister Narendra Modi’s government may be weighing targeted responses. Reuters reports that India is considering restricting imports of Malaysian palm oil, replacing it with edible oils from Indonesia or Argentina. India is the biggest buyer of Malaysian palm oil, and Malaysian palm oil futures dropped by nearly 1 percent in response to the story. Turkey was not spared either. On Oct. 10, in an unusually tough statement, India’s ministry of foreign affairs said it was “deeply concerned” by Turkey’s assault in northeastern Syria: “Turkey’s actions can undermine stability in the region and the fight against terrorism.” New Delhi has already barred a Turkish defense company from operating in India, according to the Times of India.

Cash or criticism? Ultimately, the success of India’s moves to prevent other countries—or companies—from criticizing it is linked to the size and power of its market. Or at least that’s the lesson India can draw from China. As shown below, India is a far bigger trade partner to Malaysia and Turkey than Pakistan is. The question is whether that pressure will influence policy. It may be that the companies will cave before countries do, given how much Netflix, Amazon, and others are hoping to gain from India’s rising middle class of consumers. 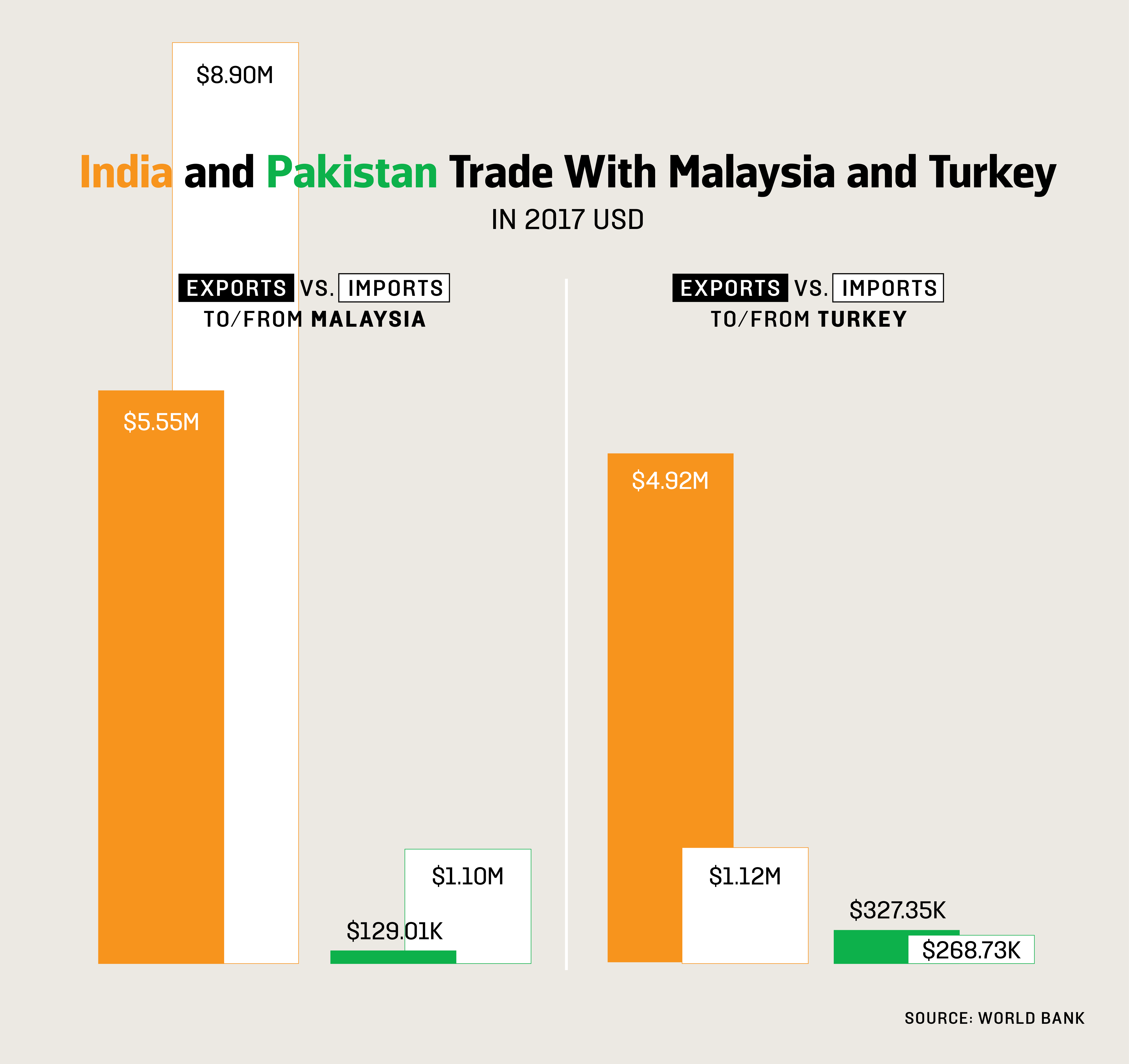 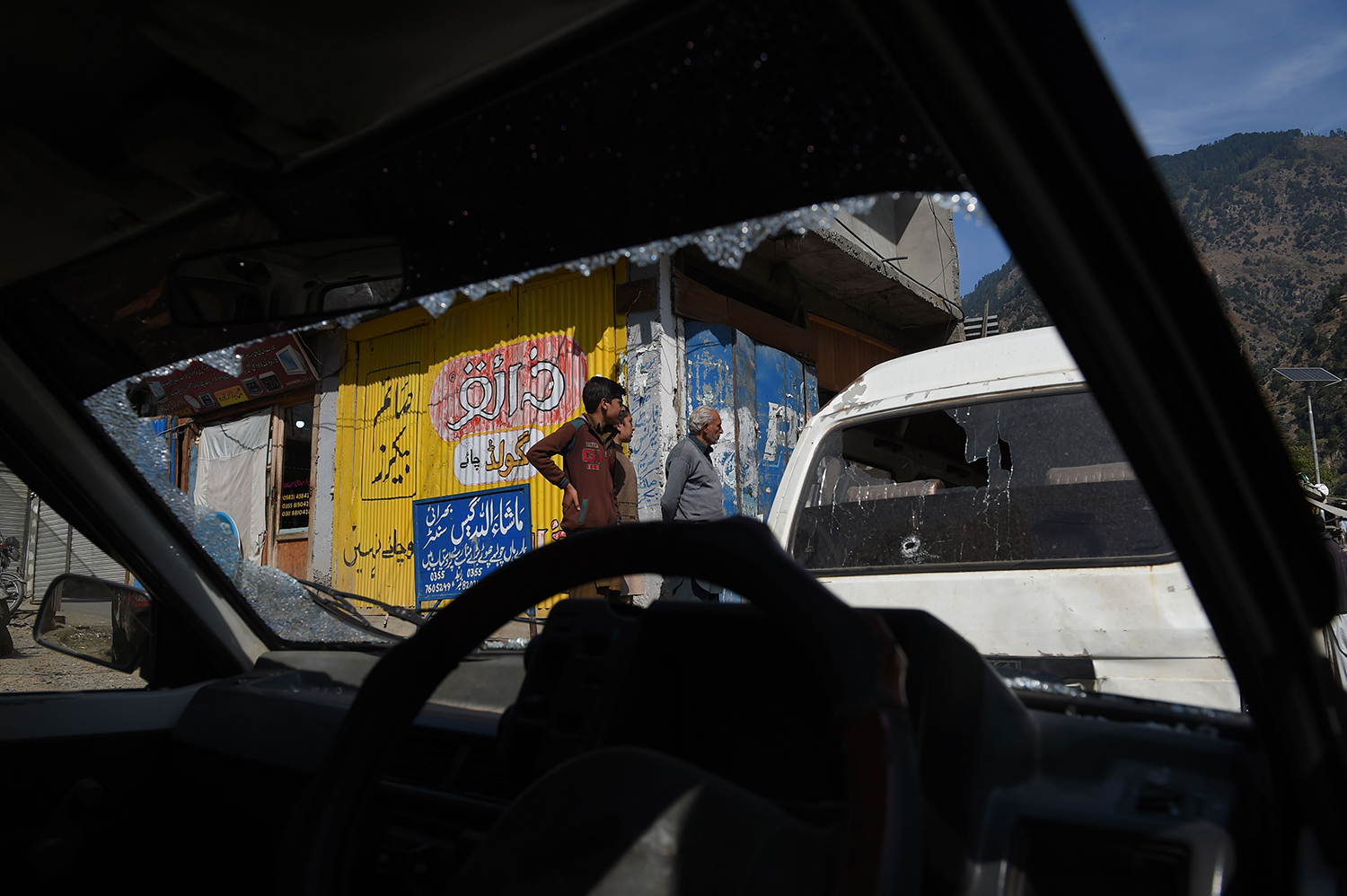 Kashmiri residents stand next to damaged cars after cross-border shelling in Pakistan-administered Kashmir on Oct. 22.FAROOQ NAEEM/AFP via Getty Images

Shots fired over Kashmir. After months of rising tension over Kashmir, Indian and Pakistani troops traded fire in the disputed region over the weekend, leaving nine civilians and soldiers dead. It was one of the deadliest skirmishes this year across the Line of Control. It comes as Alice Wells, the U.S. acting assistant secretary for South and Central Asian affairs, testified at a U.S. House of Representatives hearing on Tuesday that the United States had “urged Indian authorities to respect human rights and restore full access to services, including internet and mobile networks.”

Meanwhile, Kashmiris in the Indian-administered part of the region go to the polls later this week for what some are calling sham elections, thanks to an ongoing communications blackout and the jailing of many of the state’s political leaders.

Chaos in Afghanistan. During Friday prayers last week, two explosions shook a mosque in eastern Afghanistan, killing more than 60 people. Although the Taliban denied responsibility, President Ashraf Ghani’s spokesman quickly blamed the group, condemning it for “heinous crimes” that “continue to target civilians in time of worship.” The blast came as Afghanistan missed its Oct. 19 deadline to announce the preliminary results of the presidential election held last month. With the country’s political future uncertain, it remains unclear when and whether the U.S. peace talks with the Taliban will resume in earnest.

[If they do, it is worth policymakers’ considering why the United States gets such negotiations so wrong, as Johnny Walsh writes in Foreign Policy.]

Insult and injury in Bangladesh. Over the weekend, riots erupted in southern Bangladesh after a local Hindu man posted Facebook comments that allegedly criticized the Prophet Mohammed. The man told the authorities that his account had been hacked, but it nevertheless sparked angry protests that quickly turned violent. Four people died when police fired on the crowd.

India’s own string of pearls. On Sunday, India and the Maldives wrapped up joint military exercises in Pune, India. The two countries focused on counterinsurgency and counterterrorism operations, as India builds up its regional alliances. India will lease a Dornier aircraft to its tiny island neighbor, plugging the Maldives into India’s radar network. The two are also planning further humanitarian and disaster relief exercises.

Every year, the Financial Action Task Force (FATF), an international watchdog that tracks illicit financing, releases blacklists and “gray lists” of countries with poor controls over money laundering and terrorist financing. In the most recent rankings, Pakistan was again put on notice and given until February to improve its record or be blacklisted.

Another South Asian country also made news, this time for being taken off of the gray list. Which country was it?

Stay stable, please? Walmart CEO Doug McMillon has written a letter to Modi requesting more certainty in the country’s business environment, according to the Times of India. McMillon’s worries are understandable. As Foreign Policy has reported, New Delhi imposed new rules for e-commerce supply chains just months after Walmart spent $16 billion to acquire Flipkart, a local rival to Amazon. The changes forced Walmart to redo its business models. Last week, in a statement at the International Monetary Fund’s annual meeting in Washington, Indian Finance Minister Nirmala Sitharaman said that emerging markets would contribute “the bulk of the projected recovery” of global growth in 2020.

Mobile money. Mobile payments group Paytm is turning to SoftBank and Ant Financial to bolster its war chest with $2 billion as it competes with Amazon, Walmart, WhatsApp, and Google Pay for the rapidly growing payments market in India. The new funding would value Paytm at $15 billion and allow the company to expand into Canada and Japan, the Financial Times reports.

Sticky wicket. Novelist and writer Kamila Shamsie charts the rise of Pakistan’s women’s cricket team in the Cricket Monthly. At a recent match in Dubai, she writes, “I found myself thinking back to a match played just over 30 years earlier that marked the true start of the story of women’s cricket in Pakistan. That match had been played in front of 8,000 people, according to the captain of one of the sides. All of those watchers were police, present at the stadium for the players’ protection in the wake of death threats. No spectators were allowed.”

School days. In India, schools take cheating on competitive exams very seriously. One school in the country’s southwest is in trouble after making students wear cardboard boxes over their heads during a test to prevent them from talking to each other. Previous efforts around the country include installing cameras in exam rooms and sending in police to catch cheaters. Last year, Modi even wrote a book, Exam Warriors, that offered ethical ways—yoga, acronyms to help memorization, and laughter—for young students to get an edge.

The country had been subject to FATF monitoring over questions about money laundering and terrorist financing. Thanks to its recent progress, the monitoring will now be over, and the country may see an influx of investment and trade.