Not Everyone Has a Vote in the World’s Largest Democracy

In state and national elections, many Indians find their names missing from electoral lists—and a disproportionate number of those people are minorities and women.

MUMBAI—Maroof Azam, a 24-year-old mechanic, dropped his tools to accost a man who was passing by his store. The person in question was a volunteer for a smartphone app that tracked missing voters. “Did you receive my voter card yet?” Azam asked, his hands blackened with soot from the bike he was repairing. “No, you are rejected,” the volunteer said. Azam’s face turned ashen as he responded: “I am Indian—at least I should be allowed to vote.”

Azam is among the thousands of people who found themselves unable to participate in Monday’s state elections in Maharashtra, which Prime Minister Narendra Modi’s Bharatiya Janata Party is expected to win handily when the results are announced on Oct. 24. An officer appointed by the election authorities had come to enquire about Azam’s documents, said the volunteer who filed his application, but his case never got approved—despite Azam producing valid identification papers. The same thing happened in the country’s general elections in May.

India is often celebrated for its status as the world’s largest democracy, but relatively little attention is given to the fact that many citizens are denied the chance to vote. The founders of Missing Voters, a smartphone app to track disenfranchised voters in India, estimated that nearly 120 million citizens were missing from voter lists in last May’s national election. More than half of those disenfranchised citizens were Muslims like Azam or lower-caste Dalits, minorities who would, put together, normally constitute less than a third of the country’s population. Women are also disproportionately affected: The political scientists Prannoy Roy and Dorab Sopariwala calculated in a book released this year that, on average, approximately 40,000 female voters are missing from the electoral rolls in every constituency in India, a number often higher than the winning margin in many lower house electoral contests.

India is often celebrated for its status as the world’s largest democracy, but relatively little attention is given to the fact that many citizens are denied the chance to vote.

While voting is a fundamental right promised to every citizen, not having the ability to vote is a predicament that especially impacts the lives and political prospects of minority communities. This is especially alarming at a time when attacks on those groups are increasing in frequency across the country.

In the lead-up to Monday’s election in Maharashtra, the Missing Voters app filed more than 6,500 applications to register eligible voters across the state. Some of these applicants had voted in previous elections but still found their names mysteriously missing from the official electoral rolls. The app had some success: 73 percent of the applications filed on the app were accepted, while 20 percent were rejected for a variety of reasons. But more than 6 percent of the applications filed were not even processed; Azam’s was one of them. 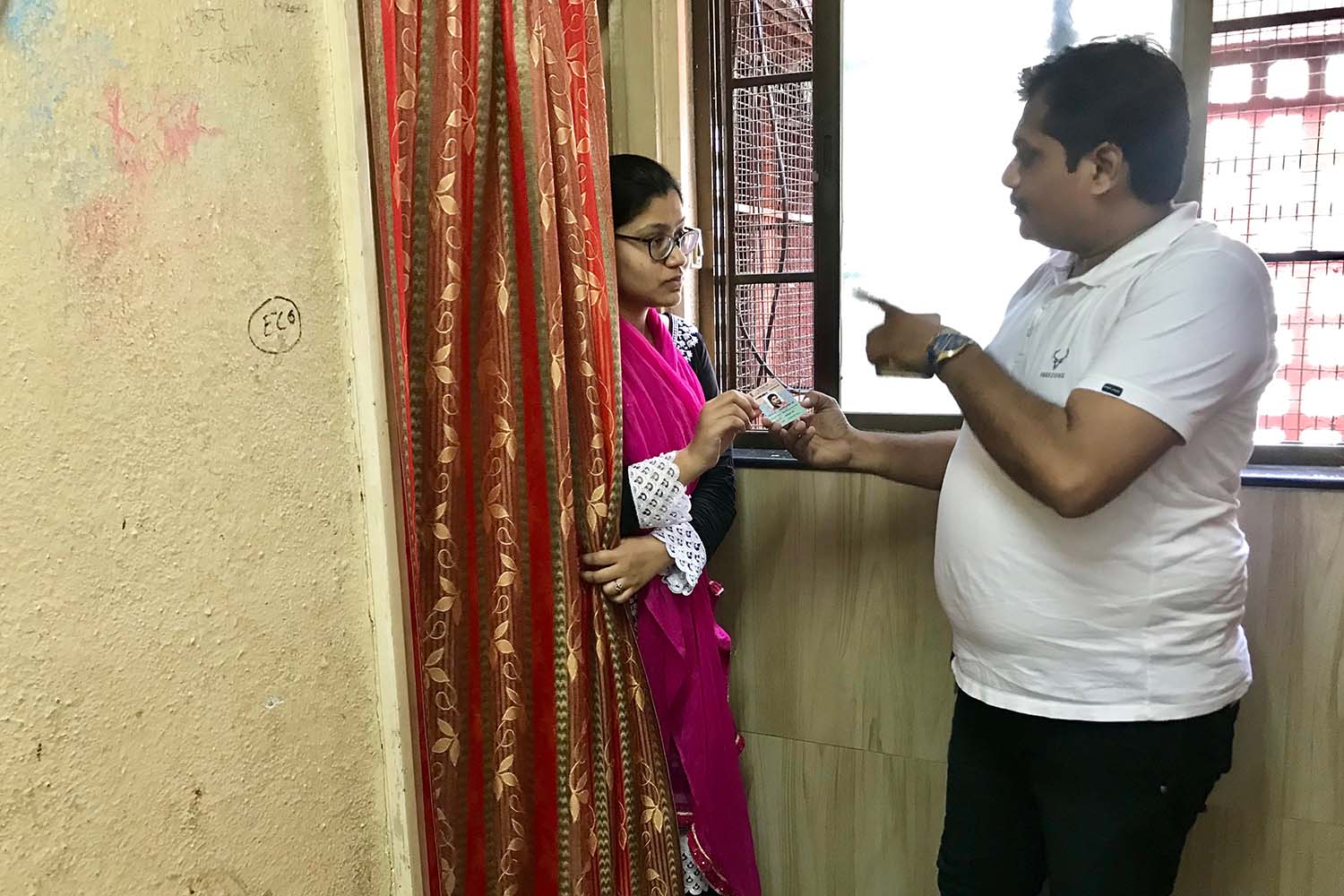 Among the first things Afreen Khalilullah Shah did after she turned 18 in November 2018 was to apply for a voter identification card. It didn’t arrive in time for the general elections in May. Shah’s application was rejected on account of her being “under the age of 18,” which, according to her official documents, was not the case. Afreen finally received her voter identification card on Oct. 11, after having reapplied. As a local community volunteer handed it to her, a smile lit her face from ear to ear. “Finally, I have my voter card. It is a proof of my Indian citizenship,” she said, before adding: “Especially for Muslims. It is our right to vote so that we can choose a representative who will keep us safe.”

Under the current dispensation, Muslims—India’s largest minority group—are increasingly challenged to prove their commitment as Indian citizens. A National Register of Citizens (NRC) in the country’s northeast has declared 1.9 million people potentially stateless, and while Hindus in the list have been promised their paperwork through a new Citizenship Amendment Bill, Muslims are left to face imminent detention—and potentially even deportation. Members of the ruling party have promised to expand the NRC across India, sending some Muslims in big cities running to gather their documents lest they need to prove their citizenship to the government. A voter card is a strong verifier of identity that the Muslim community holds especially dear.

While citizens of all religions seem to be disenfranchised from voting in Maharashtra, activists on the ground argue that the names of minority voters excluded from the rolls could be higher.

“Dalit and Muslim voters are more affected. I was looking at the case of a Muslim family with 12-15 voters, all of whom voted in the previous election, after which their names were cut,” said Smita Chaudhury, a local leader associated with the Indian National Congress, the chief opposition party, and a volunteer who has helped enroll hundreds of people to vote. “There is some political malice here. They want to nix peoples’ voices in the democratic process—those who are unlikely to vote for them.”

A 2018 study published in the academic journal Economic and Political Weekly found that in the May state elections in Karnataka that year, an estimated 1.2 million Muslims were not able to vote—a number that suggested Muslims were disproportionately missing from the electoral rolls. The study was conducted by comparing single-voter households in the state with record population data.

Jitendra Awhad is a popular state lawmaker from the Muslim- and Dalit-dominated Mumbra-Kalwa constituency in Maharashtra. He belongs to the Nationalist Congress Party—a national group that is mainly competitive in Maharashtra. In 2017, Awhad filed a case in the Bombay High Court demanding a revision of the electoral rolls of all constituencies in Maharashtra.

“I have now brought to the attention of the election commission that out of every 1,000 voters in Mumbai, almost 100 have a different name and photograph—so they won’t be allowed to vote,” he said. Bureaucratic errors in the past have led to multiple instances where the name of the voter is different from his or her corresponding photograph on the electoral rolls, disqualifying him or her from voting. Awhad alleges that these errors could be a tactical ploy to disenfranchise minority voters, especially in his constituency.Under the current dispensation, Muslims—India’s largest minority group—are increasingly challenged to prove their commitment as Indian citizens.

Last March, in the southern state of Andhra Pradesh, the then-incumbent chief minister accused his opponent’s party of deleting the names of more than 900,000 voters from the state’s electoral rolls. That opposition leader, Y.S. Jaganmohan Reddy, who is now the chief minister of the state, had admitted to using an app to profile voters and tamper with the electoral lists.

“I have a strong suspicion that large-scale and deep-seated voter suppression has become a reality in India,” said Jagdeep Chhokar, a co-founder of the Association for Democratic Reforms, a group that observes elections in the country. “It seems that it is fairly widespread, but I don’t know how to conclusively prove that there is a systematic bias [against minorities],” he added, pointing to the need for better data and research.

Apart from alleged tampering, other reasons why minorities could end up losing their right to vote could be a general lack of awareness and education among their communities, as well as the fact that poorer populations are more mobile and therefore at a greater risk of getting delisted from a particular voting constituency. All of these problems become part a vicious cycle. Not being able to vote means not being represented, with government policies ignoring the needs of minorities.

“There have been cases in the past where a majority of the cases do involve members of the minority community,” said Sanjay Jha, a spokesman for the opposition Congress party. “I think voter suppression is the elephant in the room that many in India haven’t properly addressed.”

The problem isn’t limited to minorities, however. Sharda Ravindra Singh, a Hindu who has been living in Mumbai for 20 years, says that while she and her daughter have not been able to enlist as voters, her husband and son have long been on the electoral list. “When everyone in my office says they voted, I feel bad, so I lie and tell them that I voted too,” she said, with a guilty smile.

This story was produced as part of a reporting fellowship with the GroundTruth Project, with support from the MacArthur Foundation and Henry Luce Foundation.

Flashy summits between Xi Jinping and Narendra Modi don’t achieve much because India has a weaker set of cards than China. To change the game, New Delhi needs to hew closer to Washington.

“Howdy, Modi” was just one indication that the prime minister’s foreign policy has more similarities to his rivals’ than differences.

Taiwan Wants to Help Fight the Coronavirus. WHO Won’t Let It.

How Hackers and Spies Could Sabotage the Coronavirus Fight

What Washington Can Learn About Elections—From Abroad