Is Carrie Lam on Her Way Out?

Beijing is reportedly mulling a plan to remove Hong Kong’s leader, but it isn’t likely to solve the city’s political crisis.

Welcome to Foreign Policy’s weekly China Brief. The highlights this week: Beijing considers removing Hong Kong’s leader to replace her with a chosen successor, a European prize could be awarded to a jailed Uighur intellectual, and why a recent statement by Chinese President Xi Jinping shouldn’t be taken literally.

Welcome to Foreign Policy’s weekly China Brief. The highlights this week: Beijing considers removing Hong Kong’s leader to replace her with a chosen successor, a European prize could be awarded to a jailed Uighur intellectual, and why a recent statement by Chinese President Xi Jinping shouldn’t be taken literally.

The Financial Times reported on Tuesday that Beijing is preparing plans to remove Hong Kong’s beleaguered chief executive, Carrie Lam, and replace her with a chosen “interim” appointee as anti-government protests in the city continue. Lam’s term isn’t up until 2022, but her successor would reportedly start the job in March.

The plan hasn’t been officially confirmed, and Beijing may just be toying with the idea. But removing Lam is an obvious next step and one in keeping with the Chinese Communist Party’s tendency to pick an official scapegoat. Hong Kong’s leader is nominally picked by the Election Committee, a 1,200-member group of the business and political elite. If China overrules the committee entirely, it would make the facade of “one country, two systems” wear even thinner.

If true, it shows how limited Beijing’s options are. A candidate with a history of public service or sympathy for young people could offer a way out of the crisis. Both Tang and Chan are more noteworthy for their ties to Beijing than for their diplomatic or public relations skills.

No end in sight. Even if Lam is removed from office, there are still huge rifts to be healed. Mistrust between the police and the public, and between Hong Kongers and the mainland, is at a record high. The kinds of compromises necessary to rebuild Hong Kong society—including an investigation into the city’s police force—may well be politically impossible.

Record failure. Lam’s departure would certainly be welcomed in Hong Kong, where she is unpopular: According to a poll by the newspaper Ming Pao, 73 percent of the public wants her to leave office. Lam offered to resign in September—and then denied it, despite being caught on tape.

European prize could go to Uighur intellectual. The European Parliament’s Sakharov Prize for Freedom of Thought will be awarded on Thursday—likely to the Uighur intellectual Ilham Tohti, who celebrates his 50th birthday in prison on Friday. Tohti, an economist, ran a website that was a haven of Uighur culture. He was arrested in 2014—a precursor to China’s current ethnic cleansing campaign against the Uighur Muslim minority. If Tohti does win the prize, China could react with anger toward the European Union—though likely not on the scale of its six-year vendetta against Norway for awarding the Nobel Peace Prize to the dissident Liu Xiaobo.

NBA blacked out on opening day. China’s state television broadcaster did not show the first NBA games of the season on Tuesday, as the government promised “retribution sooner or later” for the basketball league’s somewhat belated defense of freedom of speech. Meanwhile, the basketball legend Shaquille O’Neal has defended Daryl Morey, the Houston Rockets general manager whose tweet on Hong Kong ignited the controversy. NBA stars like Shaq are some of the most famous and admired figures in China. That could soon change. 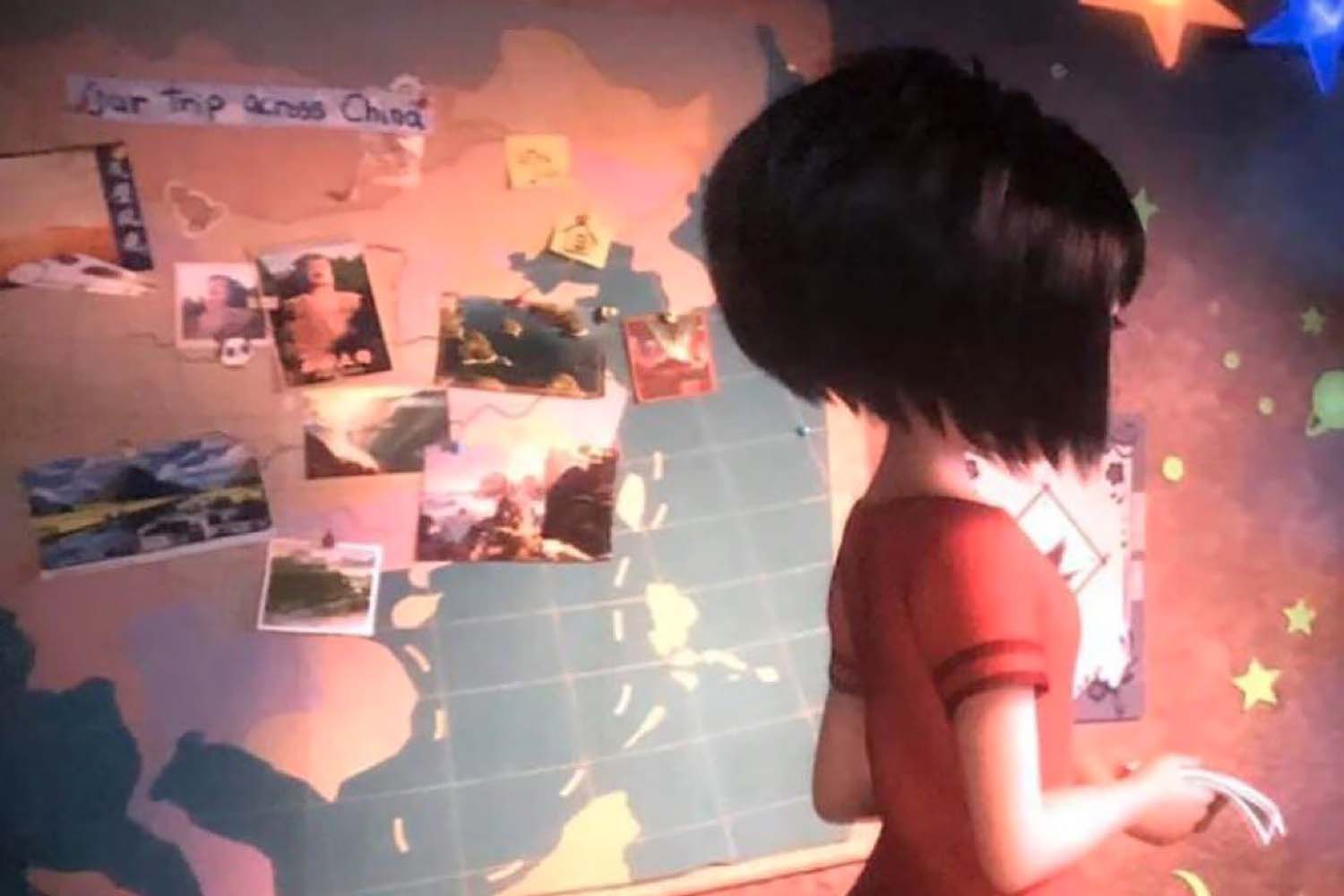 A scene from “Abominable” taken in a theater and shared by Vietnamese media. Twitter/DreamWorks

Abominable maps. Beijing got a taste of its own medicine last week, when several Southeast Asian countries banned the animated film Abominable—co-produced by DreamWorks and Pearl Studios, which is based in Shanghai—for showing a map that depicts China’s disputed “nine-dash line” claims in the South China Sea. The dispute points to a new problem for Hollywood as Beijing exerts pressure not just to omit offending plotlines but to proactively create positive depictions of China, Bethany Allen-Ebrahimian writes for Foreign Policy.

Infrastructure pressure. In another sign of economic slowdown, the Chinese government has recently doubled the value of infrastructure project approvals, with more than $100 billion worth of projects since January. The investment is another bid to stabilize growth, which is set to fall below 6 percent next year, according to official figures. The real figure is anyone’s guess: Sources in state-owned enterprises and the central government have estimated annual growth to be somewhere between 2 and 5 percent.

Facebook turns patriotic. In a much-discussed speech last Thursday in Washington, Facebook CEO Mark Zuckerberg defended the company’s commitment to free speech—aimed at heading off challenges over monopolization, poor security, and past untruths. In the speech, Zuckerberg made much of contrasting this commitment with China’s position on free speech—something that didn’t seem to be on the CEO’s mind during the years he spent courting Beijing.

Huawei spends big. Huawei has won a significant victory in Germany, after the government decided not to exclude technology from the Chinese telecommunication giant for its 5G networks. Meanwhile in the United States, Huawei spent a record $1.8 million in the third quarter on lobbying in Washington—much of it on a fundraiser connected to U.S. President Donald Trump. The firm is reportedly struggling after being cut off from Google’s Android by U.S. sanctions.

World internet forum now mostly Chinese. The Wuzhen Internet Conference was held this weekend. The government-backed event that once drew big names from the Western tech world such as Apple’s Tim Cook now gives top billing to regional presidents of hardware companies. In a notable signal of tech priorities, the keynote speech was given by Huang Kunming, the Chinese government’s head of propaganda.

Subcontract killing. One of the main hazards in Chinese business is subcontracting: It’s often alarming when the firm you think you’ve hired isn’t actually providing the product. That’s especially the case in the market for assassination, as one businessman discovered when he hired a gunman to kill a rival, only to have the gunman hire someone else for less money, and so on, until the fifth person down the line decided he wasn’t getting enough money and struck a deal with the target.

“He Never Intended to Become a Political Dissident, but Then He Started Beating Up Tai Chi Masters,” by Lauren Teixeira for Deadspin

Chinese dissidents tend to share certain qualities: courage, dedication, and a certain obstinance. Very few of them can beat you up. Xu Xiaodong is one of the exceptions: a mixed martial arts fighter who stumbled into political dissidence by criticizing state-subsidized tai chi masters—whom he accused of not being masters at all. This profile for Deadspin tells a story that is both hilarious and frightening.

Essay Contest—Foreign Policy has partnered with the Carnegie Corporation to launch an essay contest. Do you know how U.S. engagement with Russia should change in order to best improve global security? We want to hear from you. Applications close Nov. 1. Learn more: https://carnegie.io/2UMG0mx

Much can be lost in translation. That’s especially true of how the world sees China, where everyday political rhetoric has a lingering revolutionary intensity that, in context, is actually fairly banal. For example, the threat this week by President Xi Jinping that “anyone attempting to split China in any part of the country will end in crushed bodies and shattered bones” drew attention when it was read by some as a harbinger of state violence in Hong Kong.

But the expression is far less intense than it appears. “Smashed bodies and shattered bones” (fen shen sui gu) is a conventional idiom in Mandarin—similar to saying “crushed” in English. While Xi does favor strong language, in this case the corporality of the phrase is misleading.

The Next Power in the Global Economy Is Christian Lindner

Putin’s Party Is Preparing for a Post-Majority Future

The Next Power in the Global Economy Is Christian Lindner