Around the World, Protesters Take to the Streets

Mass protests flare from Chile to Lebanon, Russia deploys on the Syrian-Turkish border, and British police investigate the deaths of 39 migrants.

Here is today’s Foreign Policy brief: Governments react as mass protests flare from Santiago and Quito to Baghdad and Beirut, Russia deploys along the Syrian border as part of its deal with Turkey, and Bolivia’s Evo Morales declares victory amid skepticism.

Protests Flare Around the World

In recent weeks, mass protests have challenged governments and captured attention around the world. In Chile, Ecuador, Lebanon, and Iraq people have marched against corruption and economic mismanagement. On Wednesday in Ethiopia, hundreds of supporters of Jawar Mohammed, a critic and longtime rival of Prime Minister Abiy Ahmed, alleged he was attacked by police—two weeks after Abiy won the Nobel Peace Prize. And in Hong Kong, protesters show no sign of stopping, despite modest government concessions.

The demonstrations in Chile and Lebanon in particular have been the largest in years, and seemed to catch their governments by surprise, as the New York Times notes. There, the spark has been economic—amid a slowing global economy—and driven by the young. In both countries, some demands have been granted: It’s not yet clear how far the protests will go.

Subway fares to mass strikes. A general strike called by Chile’s labor unions is expected to continue today. On Wednesday, workers from the state mining company—the world’s largest copper producer—joined in. The broad appeal of the protests—which began in response to a subway fare hike—is unprecedented, with groups unifying over years of economic discontent, FP’s Elizabeth Miles and Robbie Gramer explain. It remains to be seen whether the president’s promises of reform will result in further dialogue.

A government reshuffle? And in Lebanon, leaders are considering reshuffling the government after a week of protests against corruption and economic crisis. Emergency reforms announced Monday have not been enough to quell demonstrations. Meanwhile, the country’s banks remain closed for the fifth day—making it impossible for family members abroad to send money home, adding to the difficulties for those on the ground.

Russia deploys along Turkey-Syria border as part of new deal. Russian military police have begun patrolling Syria’s northeast border with Turkey, according to the deal struck by Russian President Vladimir Putin and Turkish President Recep Tayyip Erdogan this week to bring an end to Turkey’s offensive in the region. Following the announcement, U.S. President Donald Trump acknowledged Turkey’s cease-fire as “permanent” and revoked U.S. sanctions on Ankara. The deal cements Turkish gains during the incursion, and it is likely a death knell for Kurdish autonomy in northeastern Syria, FP explains.

Bolivia’s crisis escalates as Morales declares victory. Bolivia’s President Evo Morales has declared victory—without a runoff—in Sunday’s election, after days of disputes and allegations of irregularities in the vote count. Morales has been in office since 2006—overseeing a court decision to get rid of term limits—and he has characterized the continuing protests against the election results as a coup. Election observers from the Organization of American States issued a skeptical review of the process on Monday. Brazil’s President Jair Bolsonaro has called for a recount.

British police investigate truck tragedy. Authorities in Britain are working to identify the 39 people found dead inside a shipping container near London on Wednesday, as well as investigating whether criminal networks were involved in what appears to be a migrant-smuggling operation. Police say the truck was owned by an Irish woman and driven from Bulgaria.

The route that it traveled was unlikely to encounter immigration checks. (The container in which the bodies were found reportedly arrived in Purfleet near London from Zeebrugge in Belgium while the cab arrived separately in Wales from Northern Ireland before picking up the container in Purfleet.) It is unclear whether the truck driver, who is from Northern Ireland, was aware that he was transporting people, but he has been arrested on suspicion of murder.

Francisco Franco’s remains. Spanish authorities plan to relocate the remains of the ex-dictator Francisco Franco from a government mausoleum to a private vault today. The move will take place with few witnesses and under near-total secrecy. Franco’s supporters and family members have called the exhumation a political ploy by the Socialists ahead of an election on Nov. 10.

Feminism in Argentina. In Argentina’s general elections on Sunday, parties on the left and right are running outspoken feminist candidates—likely a response to protests in recent years that mobilized women across classes and political persuasions. The focus on gender equality has opened up room for consensus in a divided landscape, Catherine Osborn writes for FP.

Kashmir’s election boycott. Indian-administered Kashmir holds local elections on Thursday, but most parties are boycotting the vote because hundreds of politicians remain in jail after India’s Bharatiya Janata Party (BJP) government revoked Kashmir’s special status in August. “The election is for the BJP, by the BJP, and of the BJP,” one former member of parliament said.

Mexico’s avocado gangs. Western Mexico’s avocado boom has brought much-needed jobs to the region, lifting residents out of poverty. But the $2.4 billion-a-year business has also attracted the attention of criminal cartels. Now, U.S. inspectors are threatening to leave—and avocado growers are taking matters into their own hands, the Associated Press reports.

China on the Rise on the World Stage 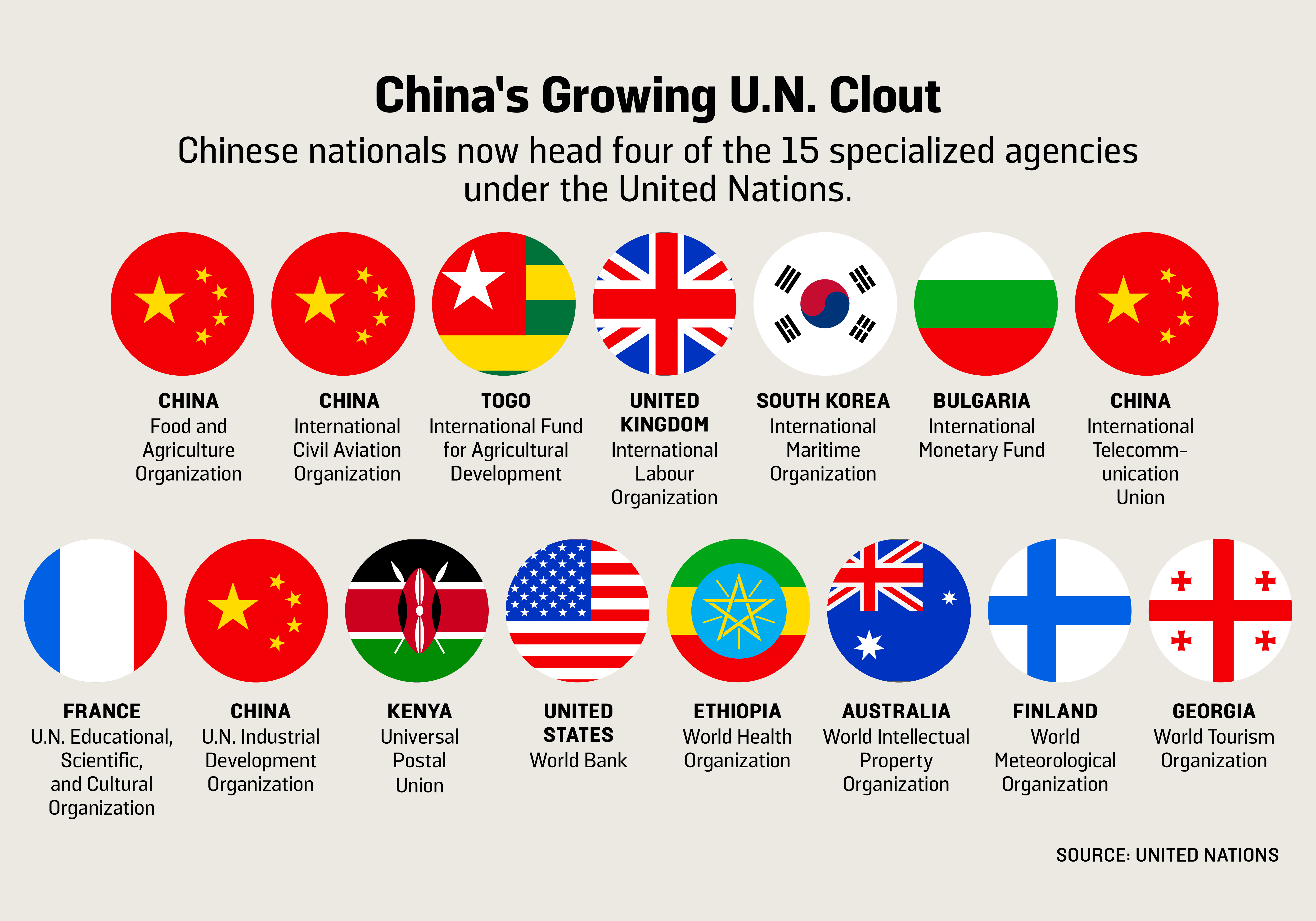 China’s presence within specialized United Nations agencies is growing quickly, as shown above. After an intense (internal) campaign, the United States lost the race for the top job at one of them—the U.N. Food and Agriculture Organization—to China earlier this year. The competition shows China’s growing clout on the global stage—and the Trump administration’s inability to slow it, FP’s Colum Lynch and Robbie Gramer report.

Essay Contest—Foreign Policy has partnered with the Carnegie Corporation to launch an essay contest. Do you know how U.S. engagement with Russia should change in order to best improve global security? We want to hear from you. Applications close Nov. 1. Learn more: https://carnegie.io/2UMG0mx

A pet cafe in China is facing public criticism after a video of its chow chow dogs—dyed to look like pandas—went viral on social media. Critics say the cafe’s treatment of the dogs is unethical, as the dye can harm their skin. The cafe was quick to respond: “Netizens please don’t project your thoughts on to us,” it posted on Weibo.

Is Belarus Putin’s Next Target?