After Three Years of Trump, Iranians Believe America Is a ‘Dangerous Country’

A poll finds that most Iranians believe better ballistic missiles and military supremacy in the Middle East will make their country safer.

There is no doubt that U.S. President Donald Trump’s “maximum pressure” campaign against Iran has put the squeeze on the country, forcing international banks and firms to steer clear of doing business with Tehran. More Iranians (55 percent) attribute their country’s economic problems to domestic mismanagement of the economy and corruption than foreign sanctions, which 38 percent blame for Iran’s ills.

But the effort has led to some unexpected consequences: It has increased Iranian hostility toward the United States and boosted the popularity of Iranian hard-liners over the country’s diplomatically minded leaders, according to a poll by the Toronto-based IranPoll, which conducted more than 3,000 telephone interviews with Iranian respondents, and the Center for International and Security Studies at the University of Maryland’s School of Public Policy.

In the past three years, Maj. Gen. Qassem Suleimani, the commander of the Quds Force, an elite unit of the Islamic Revolutionary Guard Corps that oversees Tehran’s foreign military operations, has emerged as the most popular figure in Iranian politics, overtaking Iranian President Hassan Rouhani, who greenlighted negotiations for the landmark 2015 Iran nuclear deal. Since January 2016, Suleimani—the subject of U.S. and U.N. sanctions—has seen his favorability rating at home increase from 72.7 percent of respondents to 81.6 percent in August 2019.

Contrast that with Rouhani, the first Iranian leader in decades to speak with a U.S. president, who took a telephone call from then-President Barack Obama on the sidelines of the U.N. General Assembly in September 2013. Over the same period, Rouhani’s favorability rating fell from 82.1 percent to 42.3 percent. His foreign minister, Mohammad Javad Zarif, a U.S.-educated diplomat who led the Iranian nuclear negotiations, has also seen a dip in popularity, with his favorability rating sinking to 67 percent in August 2019 from 77.5 percent in January 2016.

The poll—which we’ll be highlighting as our Document of the Week—underscores breathtaking changes in Iranian views toward the United States since Trump came into office in January 2017. Iranians now overwhelming view the United States (86 percent) unfavorably, favoring relations with countries such as China (58 percent), Germany (55 percent), Japan (70 percent), and Russia (57 percent). A whopping 66 percent of Iranian respondents believe “America is a dangerous country that seeks confrontation and control.”

The polling also reflects a growing lack of confidence in the nuclear deal. In August 2015, one month after the United States, Iran, and other world powers inked the Joint Comprehensive Plan of Action, some 76 percent of Iranians viewed the pact favorably. It is currently viewed favorably by only 42 percent of those Iranians questioned. Some 59 percent of those questioned said now that the United States has withdrawn from the deal, Iran should pull out, too. 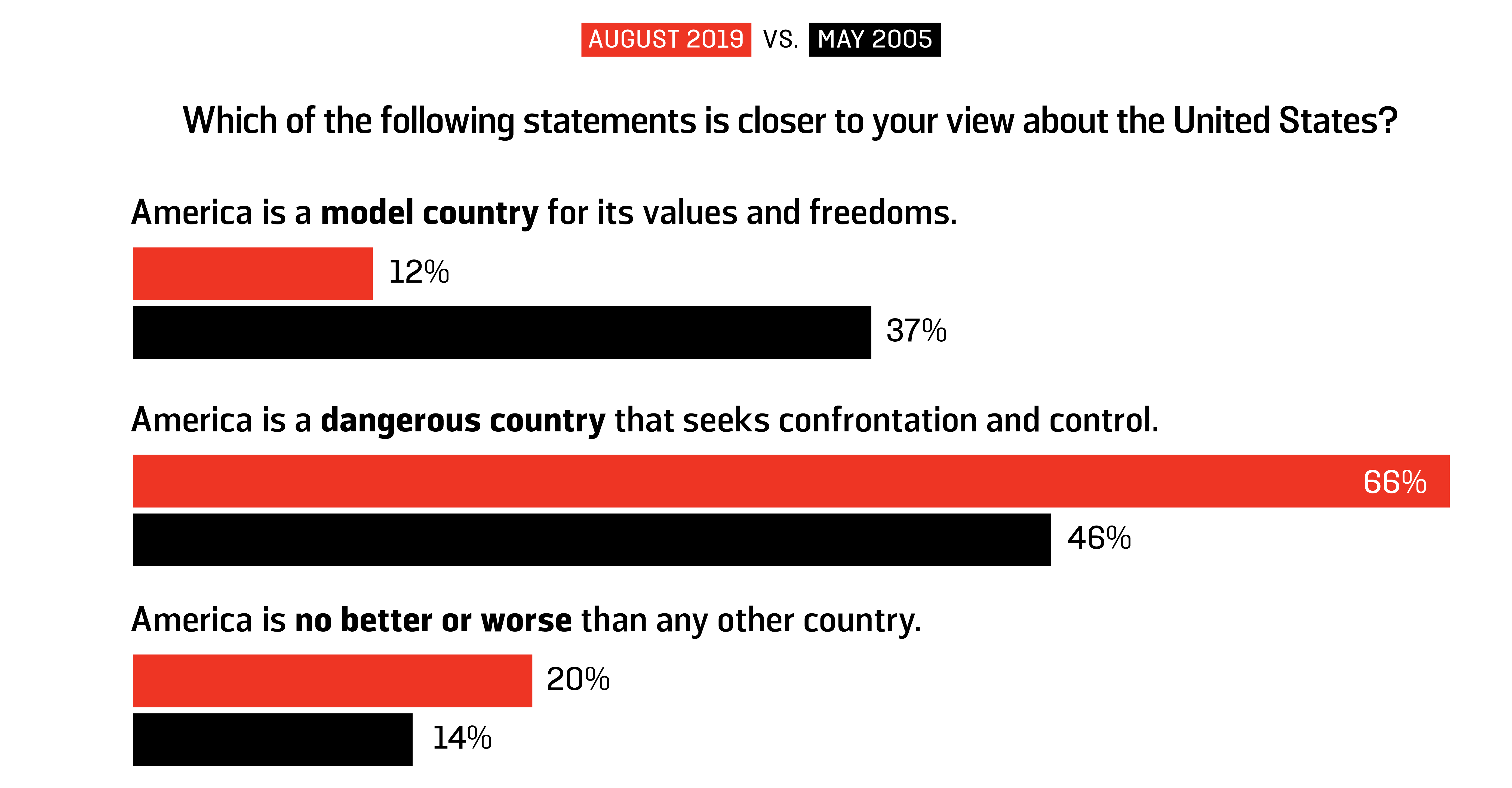 Source: The Center for International and Security Studies at Maryland poll

Iranian Opinions of Other Countries and Organizations 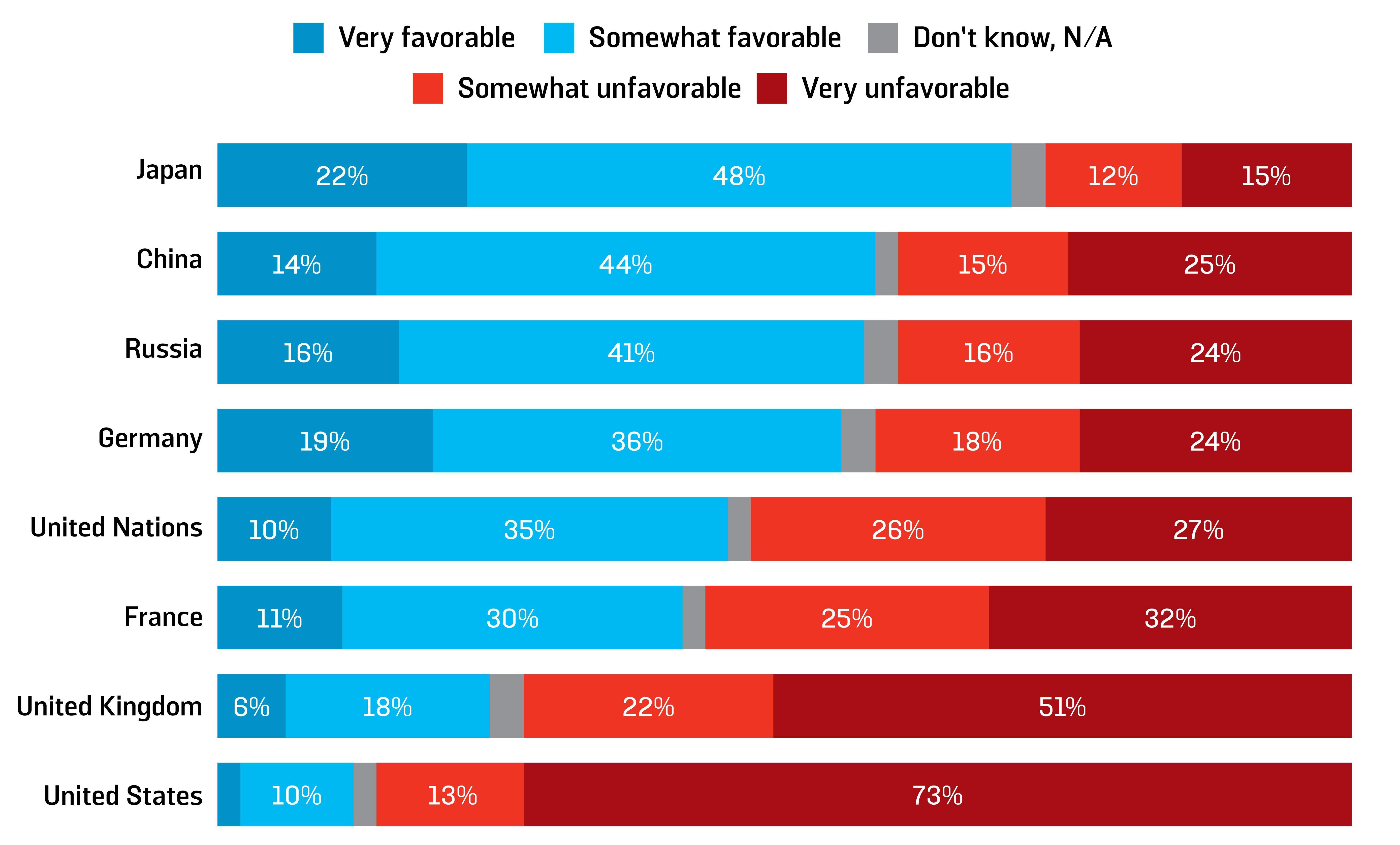 Source: The Center for International and Security Studies at Maryland poll

The U.S. effort to rally international support for reining in Iran’s ballistic missile program and cracking down on a network of Shiite militias it supports throughout the region has had little impact on Iranians, according to the poll.

There is overwhelming support—92 percent—for the continued development of ballistic missiles, and 61 percent of Iranians believe that developing more advanced ballistic missiles decreases the risk of a foreign attack, making Iranians safer. There was also overwhelming support for Iran’s foreign military activities, with some 61 percent saying they believed Iran should keep its military in Syria and 48 percent expressing confidence that Iran can solve its problems by becoming the most powerful country in the region.

Iran Is Winning the Battle for the Middle East’s Future

The vision of Iran’s Qassem Suleimani will continue to triumph until Washington trades maximum pressure and regional dominance for a multilateral Persian Gulf security structure.

Iran’s Proxies Are More Powerful Than Ever

The Trump administration’s maximum pressure strategy is working—just not in the way that matters most.

Republican lawmakers reacted angrily Tuesday to Iran’s test-firing of several ballistic missiles and called on the Obama administration to step up sanctions against the Islamic Republic.