What Is Happening at China’s Secret Plenum?

Expect discussions around slowing growth and the ongoing trade war.

China’s top leadership—around 370 Communist Party officials—are meeting this week for the Fourth Plenum (so named because it’s the fourth such meeting in this plenary session of the National People’s Congress). The last plenum was held in August 2018. An official communique that is likely to reiterate the party’s supremacy will be released on Thursday. For now, little is known about what’s happening. That’s perfectly normal for the Chinese leadership, but it should worry the rest of the world.

What’s on the agenda at the plenum is guesswork, but the economy is likely to dominate, between China’s slowing growth and the ongoing trade war. While the unrest in Hong Kong is another crisis issue, there is broad consensus over China’s hard-line approach. In contrast, there is real debate over the economy: the role that the state should play, how self-sufficient China should be. The biggest risk for President Xi Jinping is being perceived as mishandling the country’s fiscal fortunes.

Rumor mill. The unusually long delay since the last plenum has led to rumors of dissent or struggle behind the scenes. There’s also a persistent—but probably untrue—rumor that the elite Standing Committee, made up of just seven people, could be expanded back to nine. Finally, there is recent speculation that Chen Miner, the party boss of Chongqing, could be brought on as a possible successor for Xi.

Face-to-face. The plenums can produce unexpected results in a dictatorial system like Xi’s China—like the meeting in 1979 that launched Deng Xiaoping’s market reforms. It is a rare chance for the party’s power players to gather in person—and if they are unhappy with Xi, to discreetly sound out others. Normally that’s impossible because of the fear that any unscheduled meeting could be seen as plotting. Whatever happens, the rest of the world might not see the fallout for months.

Confucius Institute chief expelled. The head of the Confucius Institute in Brussels has been banned from entering Europe on suspicion of espionage—another blow to the image of the cultural centers run by Beijing. Song Xinning has now alleged that a U.S. diplomat attempted to entrap him—a likely ploy to save his career. Meanwhile, China is holding a Japanese academic accused of spying, with claims that the Chinese Academy of Social Sciences deliberately invited him to a conference to have him arrested.

Xi promotes pseudoscience. Traditional Chinese medicine, a pseudoscience invented in the 20th century, is being heavily promoted under Xi. An expansion of traditional medicine services at community health centers was announced this week. This means billions of yuan spent on treatments that have been repeatedly proven to be ineffective, with standards lower than other health care in China. In Hong Kong, injured protesters are resorting to traditional medicine for fear of arrest at hospitals.

South Korean musicians banned. China refused visas this week for three South Korean classical music students on tour with the U.S.-based Eastman Philharmonia—a small but telling incident. There is still a ban on musical performance by South Korean artists, dating to a quarrel over a U.S. missile defense system South Korea deployed in 2016. The music school called the tour off after public outcry. This sort of political obstructionism is becoming more common in China, and U.S. institutions will face increasing backlash if they give in to it.

Moral values. A new state directive (link in Chinese) sets the revised standard for Beijing’s view of good citizenship that will probably be the basis for the citizenship classes in Chinese schools. The biggest takeaways, as pointed out by Carl Minzner: Xi Jinping Thought unsurprisingly dominates, there is a new focus on environmentalism, and any mention of the value of foreign ideas has been stripped away. 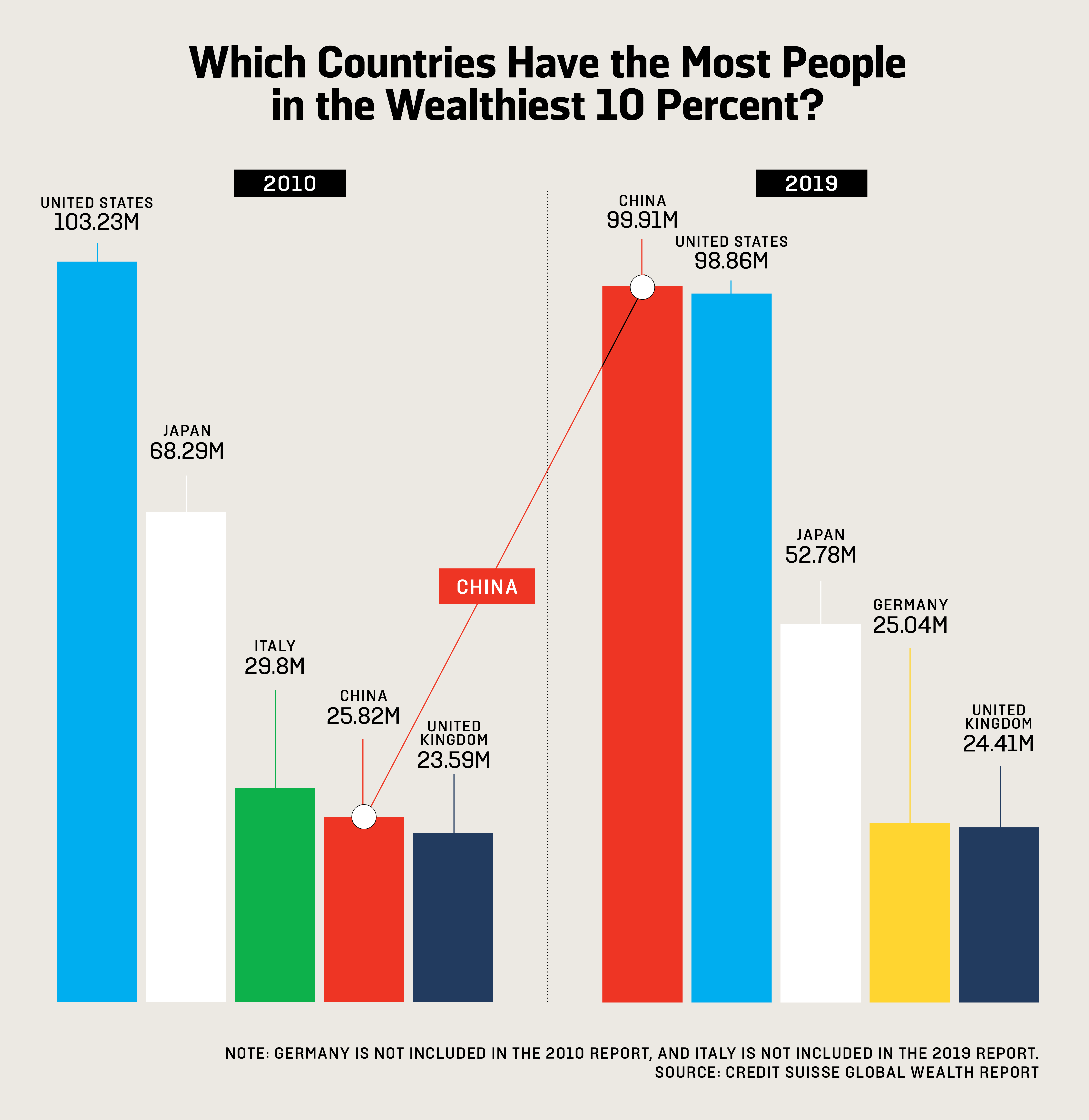 For the first time, there are more individuals in China than in the United States who are in the top 10 percent of global wealth, according to a Credit Suisse report released last week. That is mostly due to the sheer size of China’s population, but it doesn’t reflect the majority: The country’s urban upper middle class is a huge consumer force, but in much of China per capita GDP remains below the global average.

Xi endorses blockchain. There has been a rush of investment in blockchain after Xi gave it the stamp of approval as a “key technology.” Xi, like many of China’s leaders, lacks deep understanding of technology, and blockchain has more than a few problems. But Chinese provincial governments leap at any buzzword from top leadership to fund tangentially related projects. Expect a lot of claims from companies that they’re working on blockchain in order to get access to cheap loans and preferential policies—and very little delivery.

Lobbyist exposed. Former U.S. Sen. David Vitter was caught on tape shilling for Hikvision, the recently sanctioned company tied to atrocities in Xinjiang—a striking example of a U.S. politician lobbying on behalf of China. Vitter has been condemned by former colleagues such as Sen. Marco Rubio, but he is only the tip of the iceberg: Numerous former Western politicians retain strong business ties to Chinese firms.

Trade deal looks shakier than ever. The “phase one” trade agreement between Beijing and Washington looks increasingly illusory. The summit in Chile where it was supposed be inked has now been canceled. Before that, there was doubt that it would even be ready in time. China is reportedly reluctant to commit to big agricultural purchases from the United States.

Hong Kong in recession. Hong Kong has officially entered a recession, another death knell for its status as a business hub. The city might survive the short-term economic impact of the ongoing anti-government protests, but alienated businesses are already looking elsewhere—particularly toward Singapore.

Trey Menefee, a writer based in Hong Kong, has a new on-the-ground newsletter that summarizes what’s going on with the pro-democracy protests and the police daily. Menefee, a long-term Hong Kong resident, has been involved with the city’s protest movement since 2014 but maintains a critical eye on the movement’s flaws.

NEW FOR SUBSCRIBERS: Want to read more on this topic or region? Click + to receive email alerts when new stories are published on China, East Asia