The world’s nations, especially the world’s richest nations, are missing an enormous chance to do well while doing good. The name of this massive missed opportunity—and the name of my book on the topic—is “open borders.”

Critics of immigration often hyperbolically accuse their opponents of favoring open borders—a world where all nationalities are free to live and work in any nation they like. For most, that’s an unfair label: They want more visas for high-skilled workers, family reunification, or refugees—not the end of immigration restrictions. In my case, however, this accusation is no overstatement. I think that free trade in labor is a massive missed opportunity. Open borders are not only just but the most promising shortcut to global prosperity.

To see the massive missed opportunity of which I speak, consider the migration of a low-skilled Haitian from Port-au-Prince to Miami. In Haiti, he would earn about $1,000 per year. In Miami, he could easily earn $25,000 per year. How is such upward mobility possible? Simply put: Human beings are much more productive in Florida than in Haiti—thanks to better government policies, better management, better technology, and much more. The main reason Haitians suffer in poverty is not because they are from Haiti but because they are in Haiti. If you were stuck in Haiti, you, too, would probably be destitute. 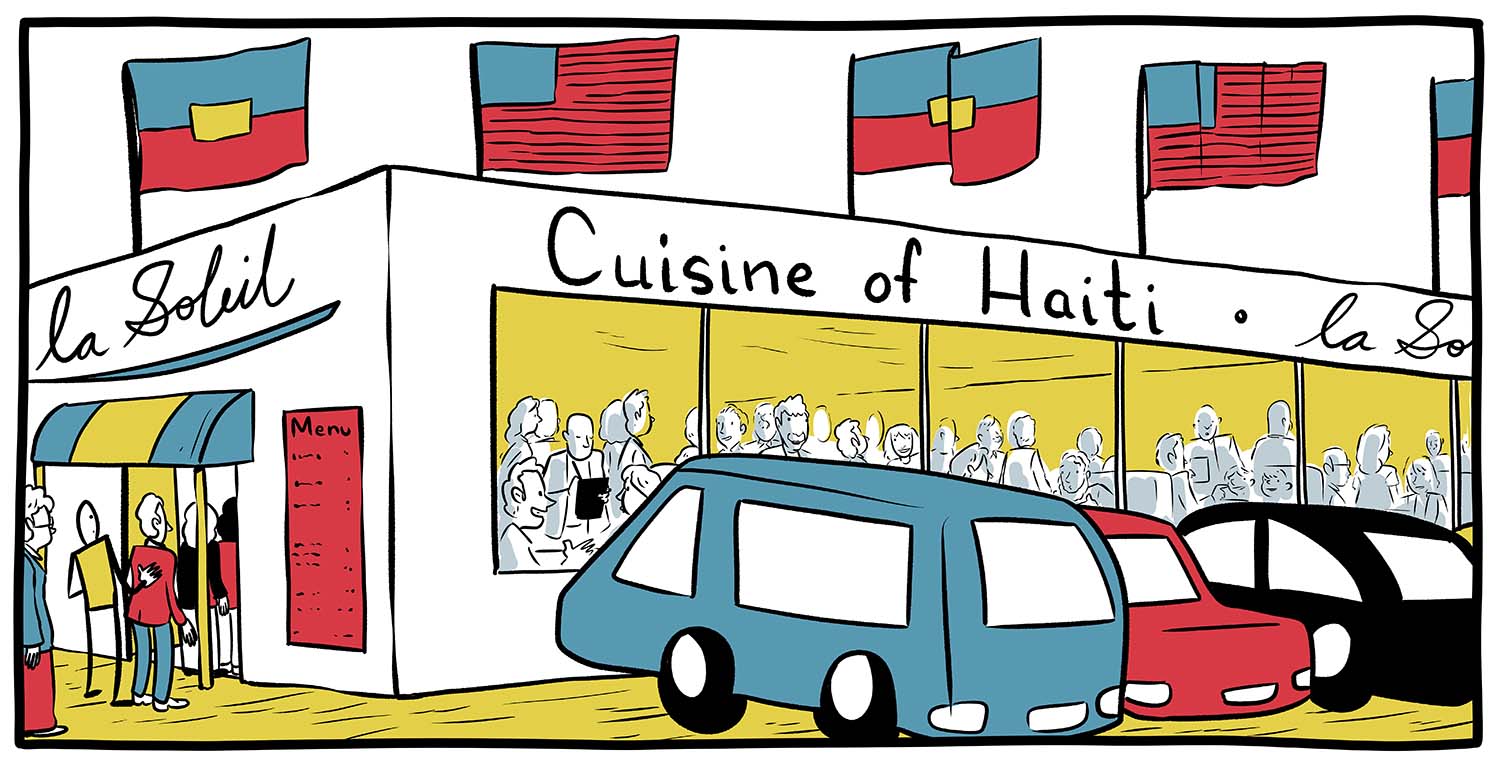 But borders aren’t just a missed opportunity for those stuck on the wrong side on them. If the walls come down, almost everyone benefits because immigrants sell the new wealth they create—and the inhabitants of their new country are their top customers. As long as Haitians remain in Haiti, they produce next to nothing—and therefore do next to nothing to enrich the rest of the world. When they move, their productivity skyrockets—and so does their contribution to their new customers. When you see a Haitian restaurant in Miami, you shouldn’t picture the relocation of a restaurant from Port-au-Prince; you should picture the creation of a restaurant that otherwise would never have existed—not even in Haiti itself.

The central function of existing immigration laws is to prevent this wealth creation from happening—to trap human talent in low-productivity countries. Out of all the destructive economic policies known to man, nothing on Earth is worse. I’m not joking. Standard estimates say open borders would ultimately double humanity’s wealth production. How is this possible? Because immigration sharply increases workers’ productivity—and the world contains many hundreds of millions of would-be immigrants. Multiply a massive gain per person by a massive number of people and you end up with what the economist Michael Clemens calls “trillion-dollar bills on the sidewalk.”

Or do we? An old saying warns, “If it seems too good to be true, it probably is.” Far lower levels of immigration already inspire vocal complaints. After presenting my basic case in Open Borders, I strive to evaluate all the common (and many not-so-common) objections to immigration. My bottom line: While open borders are undeniably unpopular, they deserve to be popular. Like every social change, immigration has downsides. Yet when we patiently quantify the downsides, the trillions of dollars of gains of open borders dwarf any credible estimate of the harms.

The simplest objection to open borders is logistical: Even the largest countries cannot absorb hundreds of millions of immigrants overnight. True enough, but no reasonable person expects hundreds of millions to come overnight, either. Instead, immigration usually begins slowly and then snowballs. Puerto Ricans have been legally allowed to move to the United States since 1904, but it took almost a century before Puerto Ricans in the United States came to outnumber the population left on the island. Wasn’t the European migration crisis an unmanageable flood of humanity? Hardly. Despite media outcry, total arrivals from 2014 to 2018 came to less than 1 percent of the population of the European Union. Many European countries—most notably West Germany during the Cold War—have swiftly absorbed much larger inflows in the past. 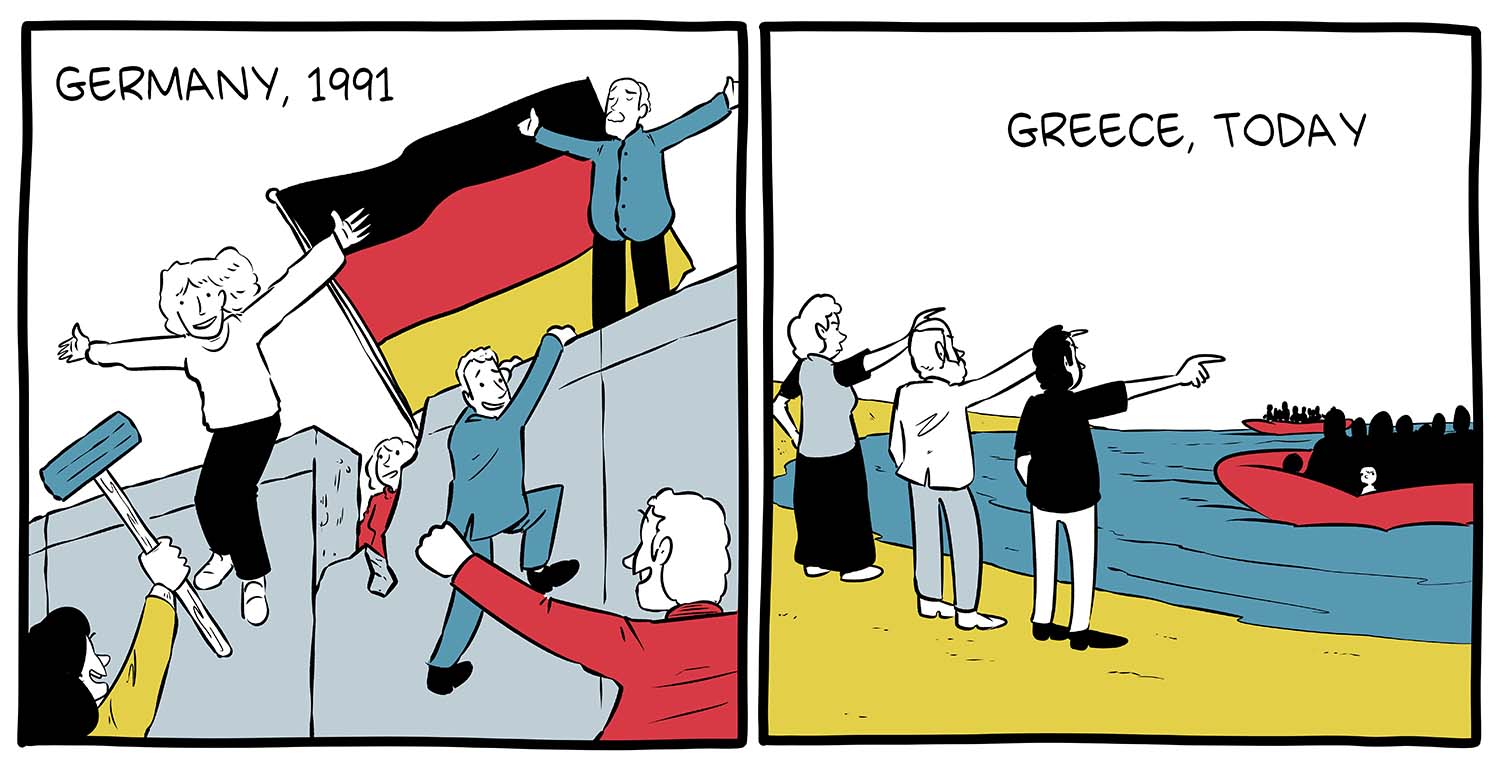 The standard explanation for these asymmetric public reactions is that resistance to immigration is primarily cultural and political, not economic or logistical. While West Germans welcomed millions of East German migrants, a much lower dose of Middle Eastern and African migration has made the whole EU shiver. Aren’t economists who dwell on economic gains just missing the point?

Let’s start with readily measurable cultural and political effects. In the United States, the most common cultural complaint is probably that—in contrast to the days of Ellis Island—today’s immigrants fail to learn English. The real story, though, is that few first-generation immigrants have ever become fluent in adulthood; it’s just too hard. German and Dutch immigrants in the 19th century maintained their stubborn accents and linguistic isolation all their lives; New York’s Yiddish newspapers were a fixture for decades. For their sons and daughters, however, acquiring fluency is child’s play—even for groups like Asians and Hispanics that are often accused of not learning English. 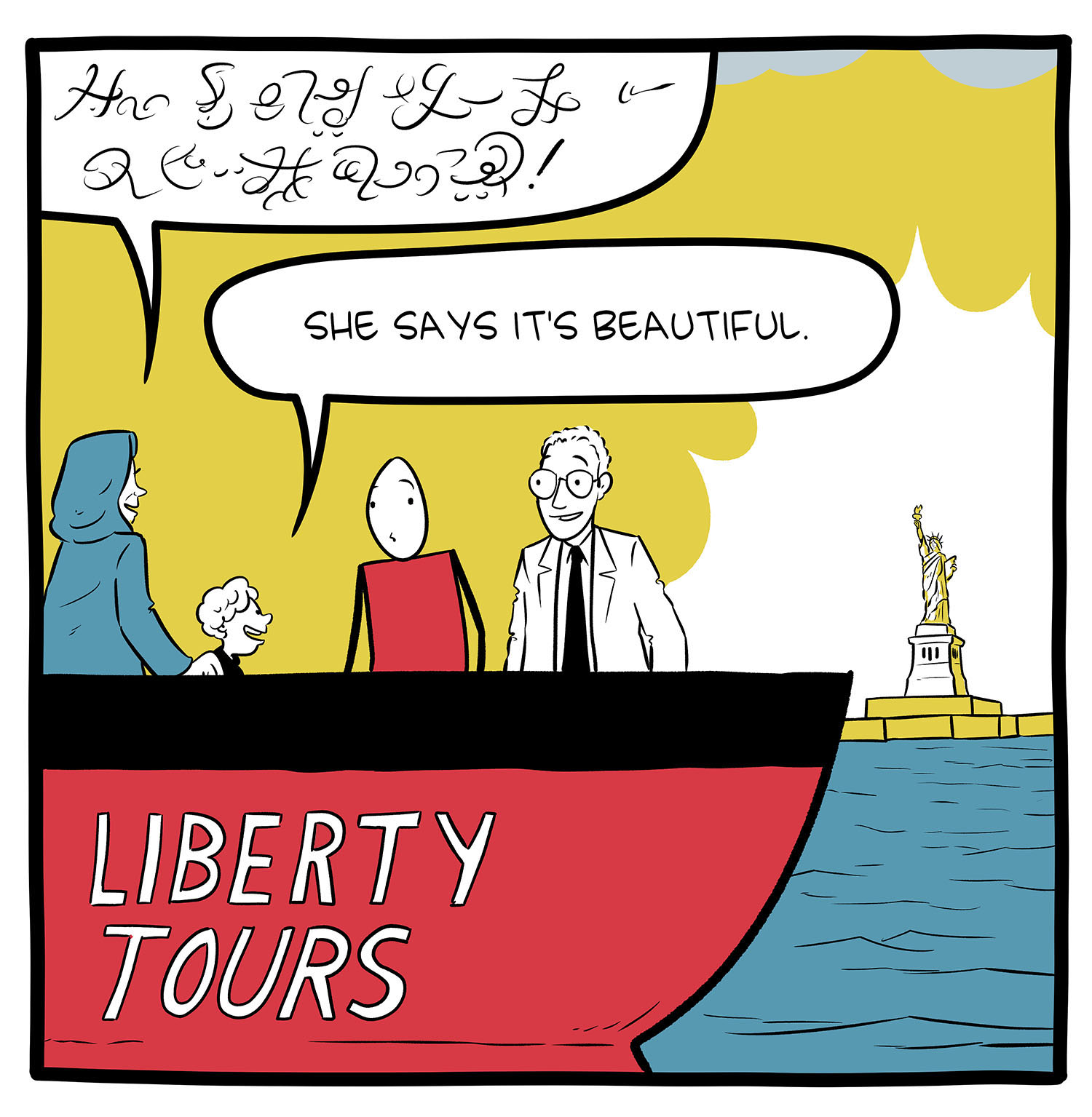 Native-born citizens also frequently worry that immigrants, supposedly lacking Western culture’s deep respect for law and order, will be criminally inclined. At least in the United States, however, this is the reverse of the truth. The incarceration rate of the foreign-born is about a third less than that of the native-born.

What about the greatest crime of all—terrorism? In the United States, non-citizens have indeed committed 88 percent of all terrorist murders. When you think statistically, however, this is 88 percent of a tiny sum. In an average year from 1975 to 2017, terrorists murdered fewer than a hundred people on U.S. soil per year. Less than 1 percent of all deaths are murders, and less than 1 percent of all murders are terrorism-related. Worrying about terrorism really is comparable to worrying about lightning strikes. After you take a few common-sense precautions—do not draw a sword during a thunderstorm—you should just focus on living your life. 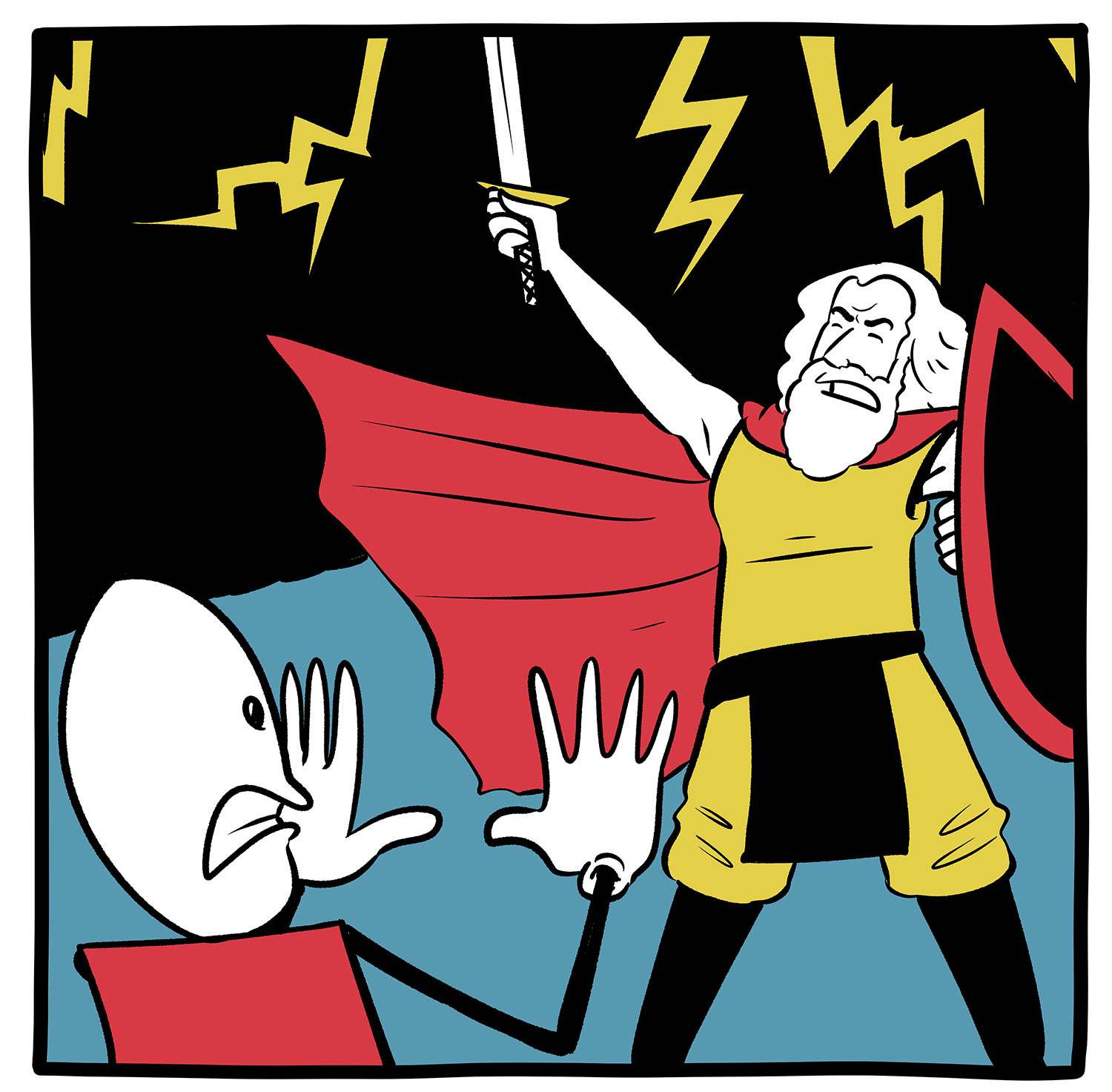 The most cogent objection to immigration, though, is that productivity depends on politics—and politics depend on immigration. Native-born citizens of developed countries have a long track record of voting for the policies that made their industries thrive and their countries rich. Who knows how vast numbers of new immigrants would vote? Indeed, shouldn’t we expect people from dysfunctional polities to bring dysfunctional politics with them?

These are fine questions, but the answers are not alarming. At least in the United States, the main political division between the native- and foreign-born is engagement. Even immigrants legally able to vote are markedly less likely than native-born citizens to exercise this right. In the 2012 U.S. presidential election, for example, 72 percent of eligible native-born citizens voted versus just 48 percent of eligible immigrants. Wherever they politically stand, then, immigrants’ opinions are relatively inert.

In any case, immigrants’ political opinions don’t actually stand out. On average, they’re a little more economically liberal and a little more socially conservative, and that’s about it. Yes, low-skilled immigrants’ economic liberalism and social conservatism are more pronounced, but their turnout is low; in 2012, only 27 percent of those eligible to vote opted to do so. So while it would not be alarmist to think that immigration will slightly tilt policy in an economically liberal, socially conservative direction, warning that “immigrants will vote to kill the goose that lays the golden eggs” is paranoid. 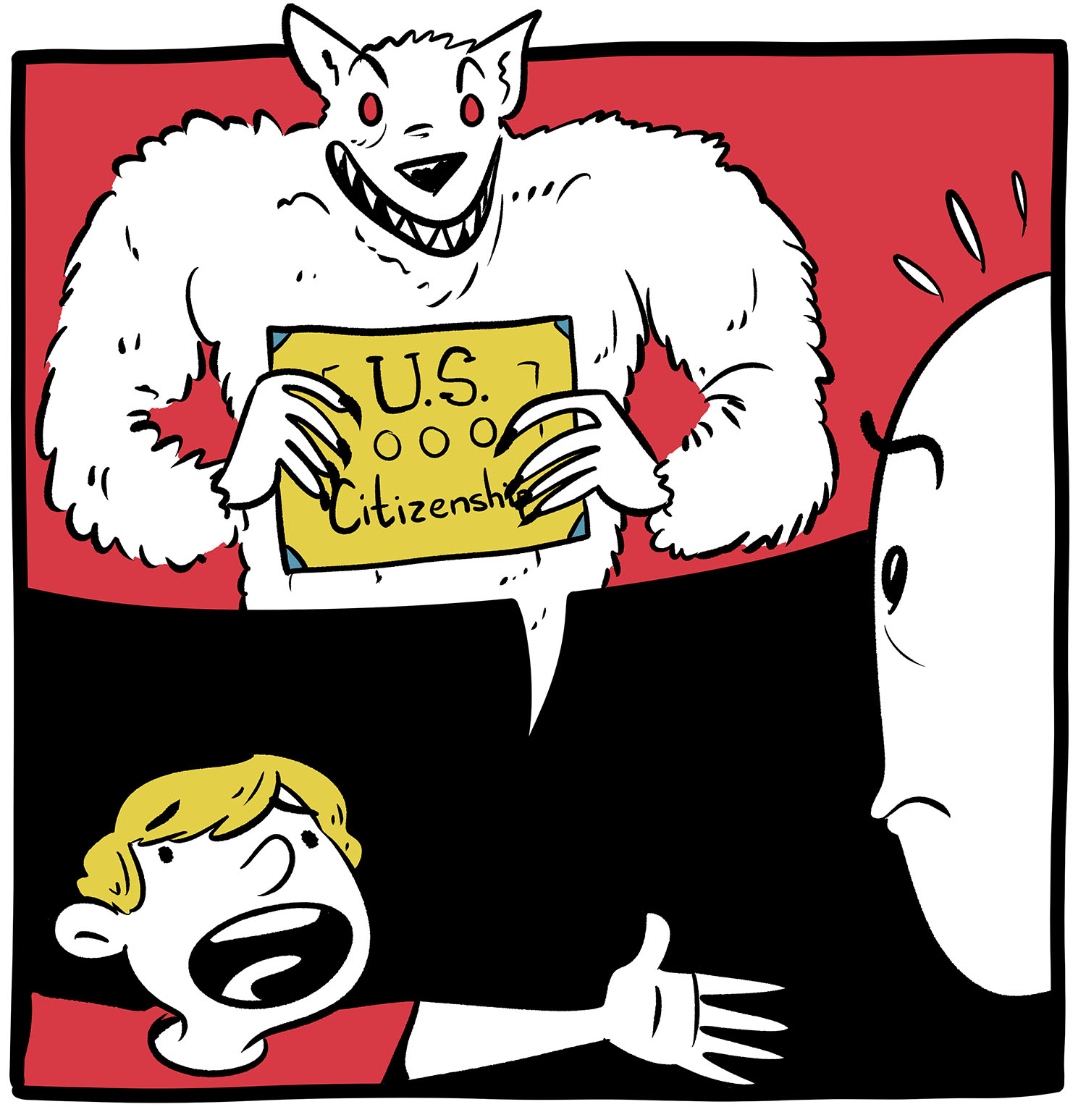 Note, moreover, that free immigration hardly implies automatic citizenship. Welcoming would-be migrants is a clear-cut blessing for them and the world. Granting citizenship is more of a mixed bag. While I am personally happy to have new citizens, I often dwell on the strange fact that the Persian Gulf monarchies are more open to immigration than almost anywhere else on Earth. According to the Pew Research Center, 76 percent of people in Kuwait—and 88 percent in the United Arab Emirates—are foreign-born. Why do the native-born tolerate this? Probably because the Gulf monarchies generously share their oil wealth with citizens—and jealously protect the value of citizenship by making naturalization almost impossible. You do not have to ignore the Gulf monarchies’ occasional mistreatment of immigrants to realize that it is much better to welcome immigrants with conditions than to refuse to admit them at all. Migrants—mostly from much poorer parts of the Islamic world—accept this deal, however unfair, exactly because they can still do far better in the Gulf than at home.

In Open Borders, I have the space to address many more concerns about immigration in more detail. What I can’t do, I confess, is address the unmeasured and the unmeasurable. In real life, however, everyone routinely copes with ambiguous dangers—“unknown unknowns.” How do we cope?

For starters, we remember Chicken Little. When people’s warnings about measured dangers turn out to be wrong or overstated, we rightly discount their warnings about unmeasured and unmeasurable dangers. This is how I see mainstream critics of immigration. Their grasp of the basic facts, especially their neglect of the tremendous gains of moving labor from low-productivity countries to high-productivity countries, is too weak to take their so-called vision seriously.

Our other response to unmeasured and unmeasurable dangers, however, is to fall back on existing moral presumptions. Until same-sex marriage was legalized in certain countries, for example, how were we supposed to know its long-term social effects? The honest answer is, “We couldn’t.” But in the absence of strong evidence that these overall social effects would be very bad, a lot of us have now decided to respect individuals’ right to marry whom they like. 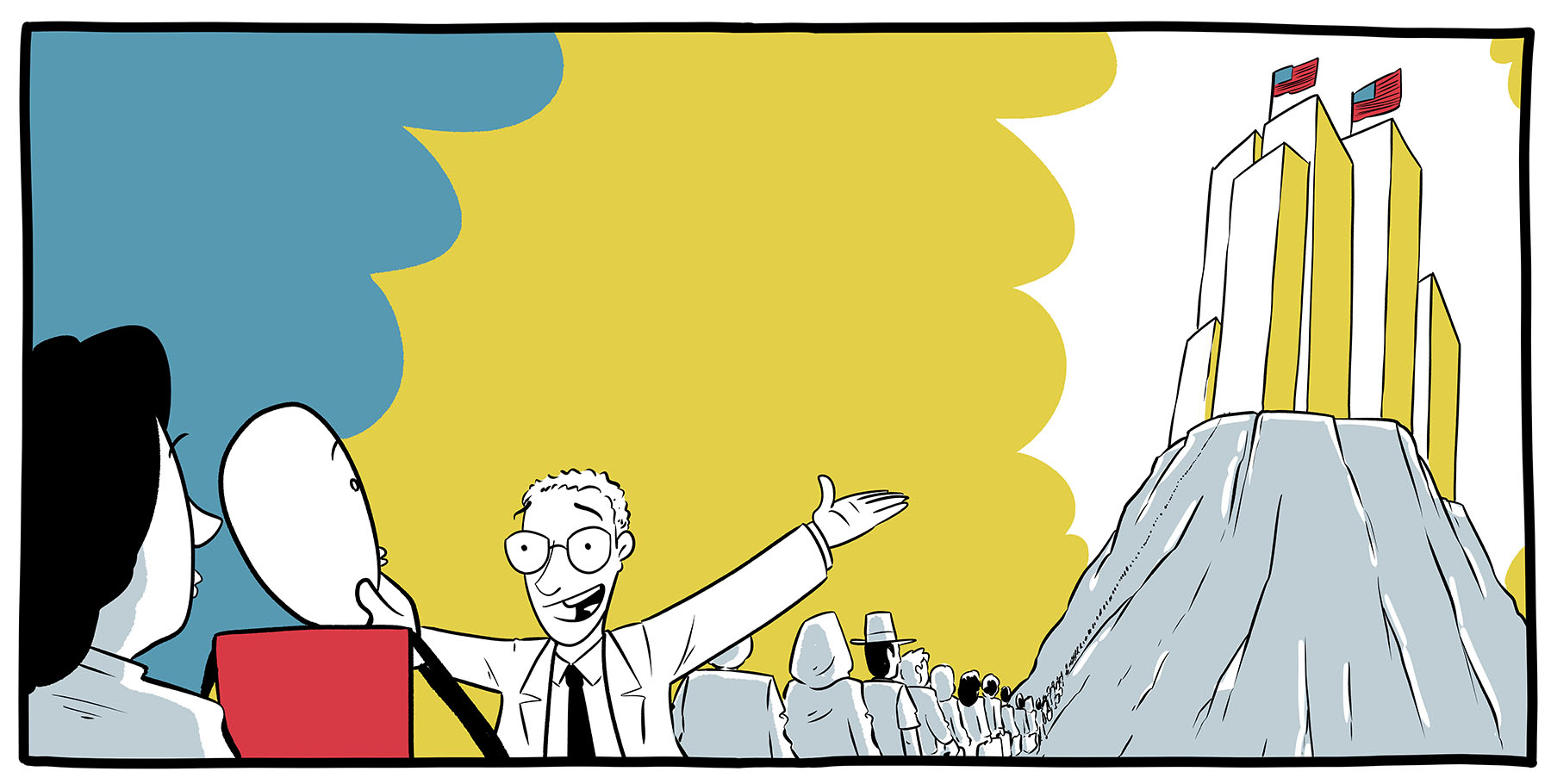 This is ultimately how I see the case for open borders. Denying human beings the right to rent an apartment from a willing landlord or accept a job offer from a willing employer is a serious harm. How much would someone have to pay the average American to spend the rest of his or her life in Haiti or Syria? To morally justify such harm, we need a clear and present danger, not gloomy speculation. Yet when we patiently and calmly study immigration, the main thing we observe is: people moving from places where their talent goes to waste to places where they can realize their potential. What we see, in short, is immigrants enriching themselves by enriching the world.

Do I seriously think I am going to convert people to open borders with a short article—or even a full book? No. My immediate goal is more modest: I’d like to convince you that open borders aren’t crazy. While we take draconian regulation of migration for granted, the central goal of this regulation is to trap valuable labor in unproductive regions of the world. This sounds cruel and misguided. Shouldn’t we at least double-check our work to make sure we’re not missing a massive opportunity for ourselves and humanity?

Bryan Caplan is a professor of economics at George Mason University and the author of The Myth of the Rational Voter, named “the best political book of the year” by the New York Times; Selfish Reasons to Have More Kids; The Case Against Education; and Open Borders.