Malawi’s Election Was Not Stolen With White-Out

A disputed presidential poll in the small southern African country has led to upheaval. International observers must release key data rather than staying silent if they want to promote stability and trust in the electoral process.

Malawi is approaching six months of post-election upheaval, triggered by allegations of fraud in the country’s presidential race. The alleged smoking gun was the use of Tipp-Ex—or white-out—to change vote counts on the official results sheets.

Election disputes are regrettably a common occurrence across Africa, but without transparent publication of results, it is often difficult to conclusively prove fraud. Leaked results can be sufficiently instructive in cases as glaring as the Democratic Republic of the Congo’s 2018 elections, but elsewhere lower-level procedural disputes are exceedingly difficult to judge on public evidence alone. With opposition groups rarely conceding without a legal challenge, it is hard to parse out when irregularities are significant and when they are overstated.

However, of all places, this should not be the case in Malawi: Each results sheet is published online, making every instance of white-out publicly available for review. Even a cursory examination of these forms is enough to reject the most sensational claims of tampering; bewilderingly, though, this readily available evidence has wholly failed to enter the discourse surrounding Malawi’s election. This represents a serious failure of the international community and speaks to a mounting crisis of credibility for election observers.

Malawi has been in a state of flux since its May polls, in which incumbent President Peter Mutharika was reelected with 38.6 percent of the vote. His principal challengers, Lazarus Chakwera and Saulos Chilima, immediately cried foul, suggesting irregularities, including the use of white-out to tamper with results sheets in favor of Mutharika. The chairperson of the election commission, Jane Ansah, admitted that the fluid was used on forms across the country, and a court injunction initially delayed the announcement of results pending recounts in 10 of the country’s 28 districts.

Mutharika and the Parliament have since been sworn in, but the opposition’s legal challenge remains to be resolved. The opposition’s case has reached the country’s High Court, and a verdict is likely in December. As the case has dragged on, protests have grown in magnitude and intensity.

Hundreds of thousands of Malawians have taken to the streets, sparking sporadic episodes of violence and looting. At least one civilian has died, a child who was exposed to tear gas, and a policeman was brutally stoned to death in October. With protest leaders pledging to sustain civil disobedience efforts until Ansah steps down, the upheaval is likely to continue at least until the trial concludes and may escalate if the verdict is not to the protesters’ liking.

Stopping the narrative here, as most media have, leaves the reader to disentangle the competing statements of the opposition and election commission with little evidence to go on. Does tampering merit the complete annulment of the election, as the opposition suggests, or was white-out used merely to correct mistakes, as the election commission asserts? With no analysis of the root claims, it is easy for one’s mind to default to a sensational image of election officials brazenly changing votes in favor of the ruling party. And headlines from the Financial Times alluding to “Malawi’s ‘Tipp-Ex president’” do little to dissuade such a leap.

Sensationalism sells, but the reality is that considerable evidence is publicly available, providing an unprecedented opportunity to inject clarity into the election dispute. Before looking at the forms themselves, though, it is instructive to imagine how fraudulent use of white-out would present itself.

Above all, one would expect to see vote counts for the main opposition candidates whited-out and reduced, with votes for Mutharika artificially inflated. Such instances would likely account for nearly all cases, for if using the correction fluid was truly a coordinated effort aimed at tampering, there is little reason to suggest it would show up innocuously elsewhere. Lastly, we would expect a distinct geographical distribution. For example, its use in the 10 districts where the opposition called for recounts should be anomalously high.

None of this is the case. Having systematically reviewed over 1,000 results sheets, my research found that the presence of white-out is unremarkable. Shown below is a representative example of a whited-out results sheet, showing that most of the corrections are concentrated in the accounting section at the top of the form, away from the candidates’ vote totals. Many other forms have just two or three blotches of fluid, and very few actually implicate the votes of the main candidates. My findings suggest that white-out was merely a substitute for crossed-out numbers, pointing to human error instead of malicious tampering. 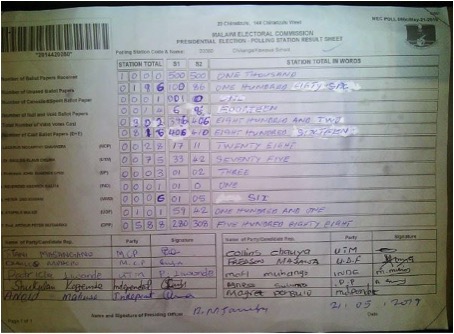 A results sheet from the Chiradzulu district in the southern region of the country shows signs of white-out. Malawi Election Commission

There is no evidence of any distinct geographical distribution of white-out use, and the fluid also appeared in forms from the simultaneously conducted contests for Parliament and local representatives. This second point is important because only the presidential election has been implicated in the court case. Thus, the contention is targeted fraud, which the data does not support. In fact, my examination of the results directly contradicts what would be expected in a case of premeditated fraud.

As I have argued elsewhere, this analysis is not intended as a full validation of Malawi’s election, but it does go a long way toward discrediting much of the sensational rhetoric surrounding the vote.

The first lesson is that the international community lacks an appetite for African data. That data could be ignored in a setting of above-average transparency is even more disturbing. While most African countries lack an apparatus for the type of polling that has become the norm in the United States, even aggregated election data can provide valuable information. And where polling station-level data exists, observers should look to integrate standard statistical checks into their repertoire and reporting.

Furthermore, domestic observer groups often greatly outnumber international observers, yet little is done with their data. An emphasis on increasing the capacity of these groups and integrating their findings could be a cost-effective way to expand everyone’s understanding of what happens on election day.

Second, election observers are facing a growing crisis of credibility. Observers’ inability to credibly weigh in on the validity of results in Kenya in 2017, the Democratic Republic of the Congo in 2018, and now Malawi in 2019 is deeply unsatisfying. An extended post-election disruption is exactly what transparent election reporting aims to mitigate, yet the presence of no less than four international observer missions in Malawi has failed to move the needle, with observers silent on the use of white-out.

Observers must realize that there is room to offer views on procedural disputes while remaining objective. Instead of going quiet between Election Day statements and a much later final report—the European Union mission to Malawi stopped tweeting out updates only three days after polls closed—observers should continue to actively weigh in, adding value during this critical period when credible evidence is in highest demand.

Now, observers are hesitant to release sensitive data or take a stand due to valid concerns over stability, as was the case in Congo. Yet if data releases were publicly assured before the polls, the incentive structure of fraud and contestation could be adjusted. Namely, there would be less latitude for cheating and enhanced capacity for public oversight.

How to Steal an Election in Broad Daylight

Autocrats and counterfeit democrats have perfected the art of rigging polls to stay in power — without breaking any laws.

Why Has the President of Malawi Still Not Gone Home from the U.N. General Assembly?

The Malawian government is now threatening to arrest anyone who spreads rumors that President Peter Mutharika is gravely ill.

This would also free observers from judgment calls that could be perceived as political, making their role closer to that of messenger than adjudicator. Bluntly, it is hard to justify the withholding of information by groups so publicly espousing transparency. And by failing to capitalize on Malawi’s data releases, the international community undermines its own case for transparency elsewhere.

Malawi threatens to be a prime example of the danger of international reticence. An analysis of the results sheets suggests the court will likely not annul the election. Yet without transparent and comprehensive coverage of the election dispute, the court’s verdict could blindside opposition supporters, creating a flash point for violence. Evidence-based reporting of the allegations is critical in managing expectations during this period of uncertainty.

Without transparent and comprehensive coverage of the election dispute, the court’s verdict could blindside opposition supporters, creating a flash point for violence.

Malawi highlights the best and the worst of African elections. On the positive side, the country has an independent judiciary, the opposition has chosen to contest the results via legal channels, protests have been overwhelmingly peaceful, and transparency is high.

Still, Malawi is in the same unenviable position that many other African countries have faced: locked in a prolonged post-election dispute that risks an escalation of violence. Observer missions, as they are currently configured, have proved themselves marginal at best and futile at worst, but they could make significant headway by integrating all available data and by more actively presenting credible evidence in the public eye.

In this case, though, you didn’t need to be an observer to get toward the truth. Perusing the Malawian results sheets allows anyone to see why access to information should be the norm and not the exception in Africa and everywhere else.

Luke Tyburski is a project assistant with the Atlantic Council’s Africa Center.

How to Steal an Election in Broad Daylight

Autocrats and counterfeit democrats have perfected the art of rigging polls to stay in power — without breaking any laws.

Why Has the President of Malawi Still Not Gone Home from the U.N. General Assembly?

The Malawian government is now threatening to arrest anyone who spreads rumors that President Peter Mutharika is gravely ill.