Can Comics Save International Relations?

Academics need to get better at reaching non-experts. Narrative media offer one possibility.

The value of a well-informed society can hardly be understated. But in this era of “fake news” and accusations from government officials that people “have had enough of experts,” how should academics engage the public?

As tempting as it might be to retreat into the ivory tower and continue writing papers only for the scholarly audience, doing so would be a mistake. For one, recent divisive elections have pitted voters with college degrees against voters without, and failing to reach across such social divides could risk further societal polarization. This is especially true for topics such as artificial intelligence, climate science, and biomedicine, where both expertise and broad public engagement are needed to address societal concerns.

In addition, research is often improved through the process of public engagement—particularly in the social sciences, where people are ultimately the subject of study.

Academics have long recognized the need to better communicate with wider audiences. In turn, they’ve increasingly started to employ popular books, blogs, and visualizations as communication tools. The use of narrative structures to communicating is also becoming more popular and has even become a subject of study. Nobel laureate Robert Shiller’s Narrative Economics is a recent example.

In new research at the Cambridge University’s Bennett Institute for Public Policy and Oxford University’s Institute for New Economic Thinking, we are experimenting with a communications medium capable of blending both narrative and visuals: comics.

Defined as “sequential art,” comics generally communicate content through a series of images bound together in a linear narrative. Although there is some cultural variation in style and substance across countries, this familiar, accessible medium holds wide appeal and can convey the most nuanced or serious information to audiences everywhere.

Perhaps that is why comics are commonplace in classrooms and newspapers, and have also found application in health care, in science communication, and in helping people digest insights from data. Yet they’ve rarely been deployed in public policy discussions.

This may be because—at first glance—comics seem too frivolous for weighty policy discourse. However, a number of studies have found that they improve engagement, motivation, and, in some cases, information retention. Moreover, the richness of the comic medium—as compared with the standard policy brief or academic paper—should not be underappreciated. In comics, readers are often invited to see a particular issue or topic from different characters’ perspectives, opening up the possibility of deeper engagement with an issue. Additionally, by combining information with emotional content, comics have a unique ability to engender empathic understanding—something to be welcomed in the context of today’s bitter political divides. 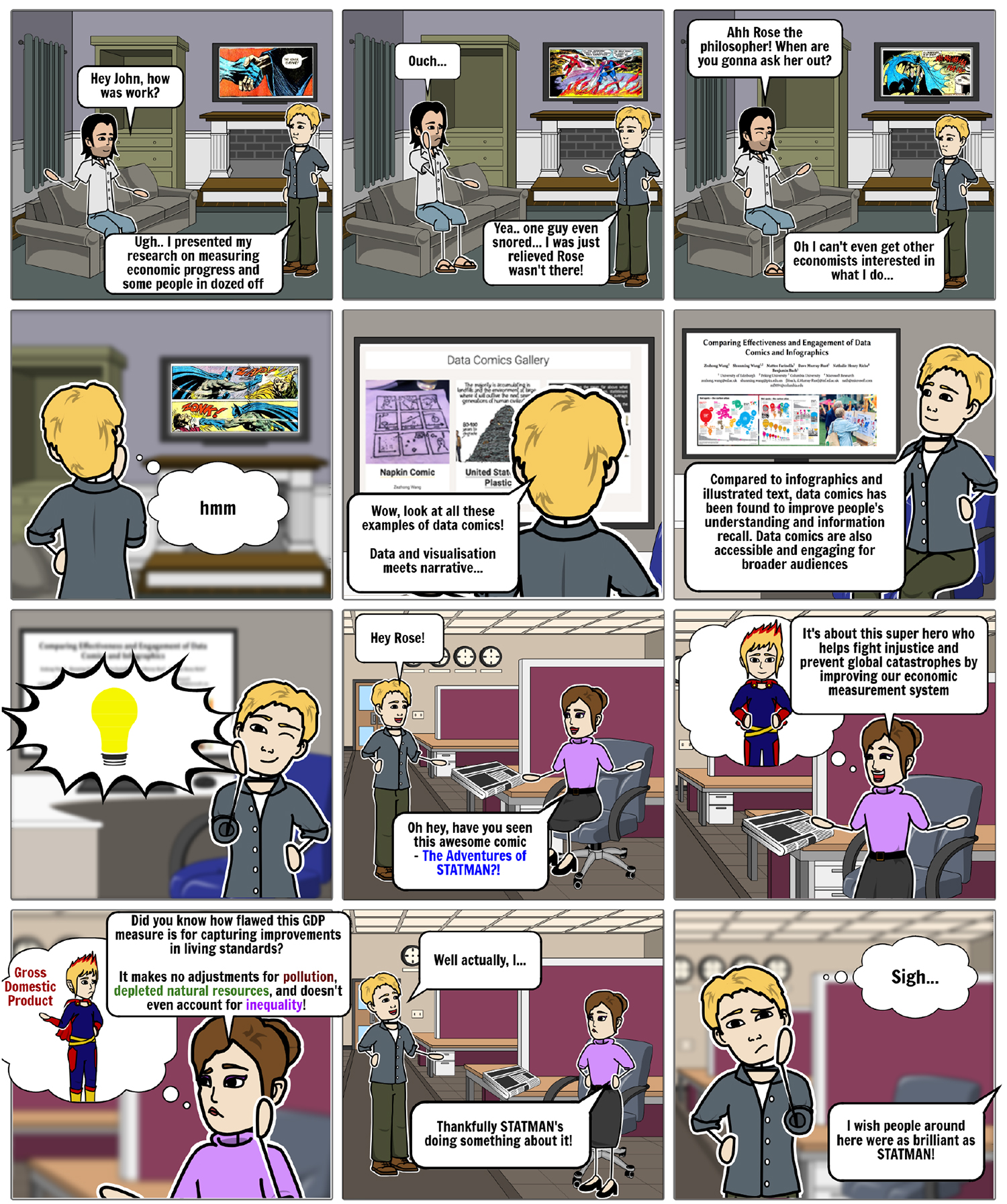 The Adventures of Statman. Create your own at Storyboard That. For full image attributions and references see https://www.bennettinstitute.cam.ac.uk/blog/adventures-statman/

Our work explores the possibility for comics to encourage public engagement with complicated and contested subjects such the economy and climate change. The Adventures of Statman shows the plight of an economist seeking to better express the importance of his research to a potential love interest. The Sipster introduces a new superhero whose special powers allow her to see the world as a complex system. Using her knowledge about feedback mechanisms and the like, she works to identify areas where small policy interventions can have an outsized impact on decarbonization and the transition to a cleaner, greener planet.

Comics, of course, are a complement, rather than a substitute for traditional modes of communication, such as scientific papers or technical reports. The content in both comic series is underpinned by peer-reviewed publications. Without that solid research background, the strips might well entertain but would be unlikely to serve as effective tools for better informing the wider public.

While comic creation has traditionally required advanced artistic or design capabilities, recent developments in online software packages such as Storyboard That allow much wider participation and engagement with the medium. Our own use of the software attests to the fact that even the most art-illiterate academics can figure out how to create comics.

More generally, making space for creativity in research and policy could help democratize the understanding of complex concepts. The use of academic language can often exclude engagement by nonspecialists. However, using a more creative and familiar medium enables others to understand and join in. 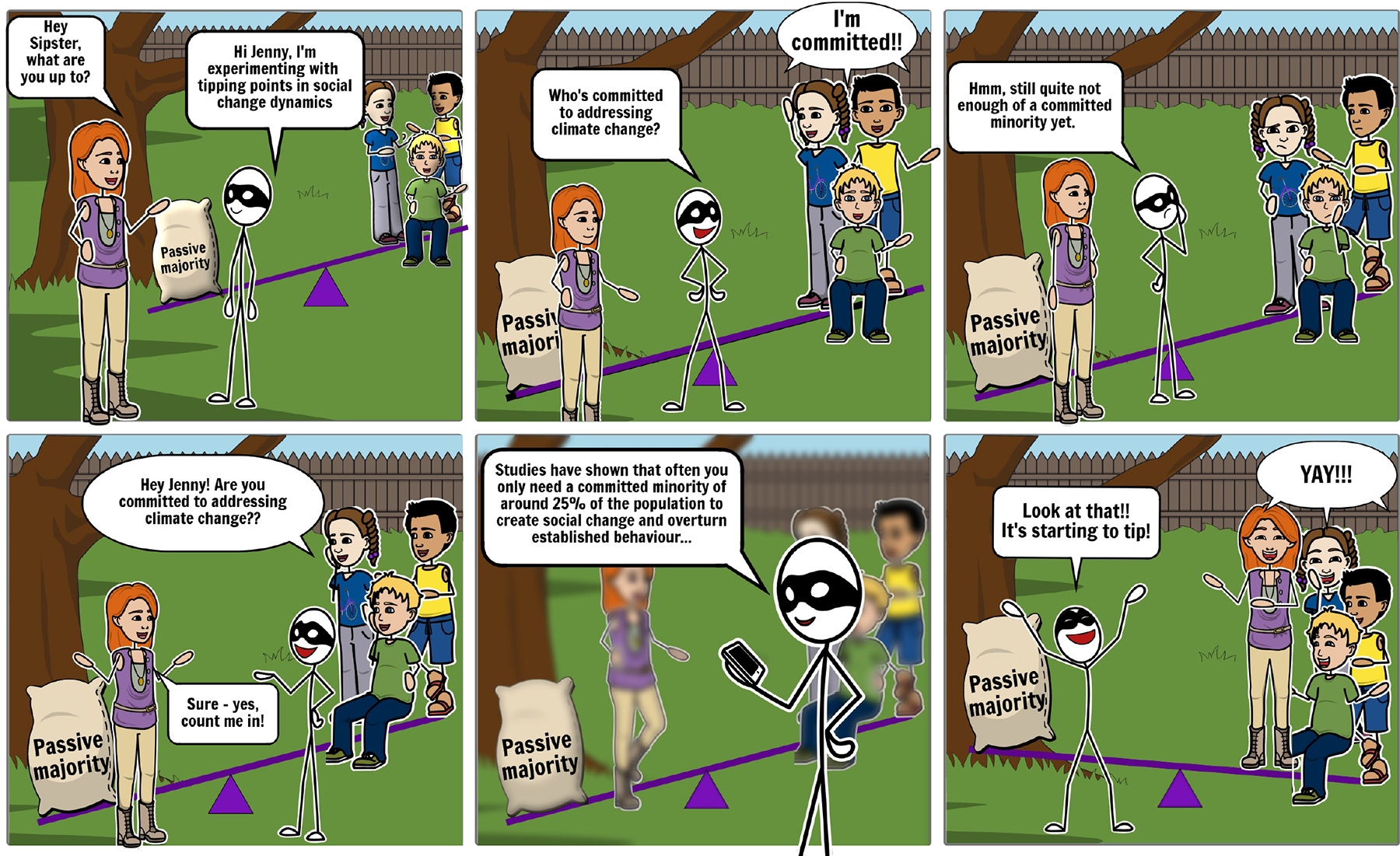 The Sipster comic. Create your own at Storyboard That. For full image attributions and references see https://www.postcarbontransition.net/the-sipster

Encouraging creativity might also unleash new avenues for collaboration with the entertainment, design, and arts sectors. That, in turn, could help spur clear thinking, lead to new ideas in research, and enhance the effects of scholarly work. As Charles Eames once said about using film as a medium for understanding, explaining, and ultimately solving problems: “Putting an idea on film provides the ideal discipline for whittling that idea down to size.”

For all their promise, there are limited resources and incentives in academia for encouraging such initiatives, although that may be slowly changing. The increasing emphasis on impact in research funding, spurred by funders’ desire to ensure that their money actually delivers benefits for society, is one encouraging sign.

Still, time spent devising comics—or working on other forms of public engagement—counts for little in academic tenure or promotion decisions. That should change; it’s hard to reap the benefits of the billions of dollars spent on research if academics cannot convey why what they do matters.

Comics are one medium that can help bridge this divide.

The main schools of thought still cling to an outdated understanding of how civilizations work.

Diane Coyle is the Bennett professor of public policy at the University of Cambridge and co-directs the university's Bennett Institute for Public Policy.

The main schools of thought still cling to an outdated understanding of how civilizations work.