Why Pakistanis Are Marching Against Imran Khan

The economy is floundering despite a recent IMF bailout, and structural problems make it hard to envision a turnaround.

Welcome to Foreign Policy’s weekly South Asia Brief. The highlights this week: Mass protests in Pakistan against Prime Minister Imran Khan, India backs out of a regional trade agreement, and an Indian nuclear plant gets hacked.

Welcome to Foreign Policy’s weekly South Asia Brief. The highlights this week: Mass protests in Pakistan against Prime Minister Imran Khan, India backs out of a regional trade agreement, and an Indian nuclear plant gets hacked.

“Today, we have shut down Islamabad. Tomorrow, we will shut down the entire country,” Maulana Fazlur Rehman declared to tens of thousands of anti-government protesters in the Pakistani capital on Sunday. Rehman, a Muslim cleric backed by Pakistan’s main opposition parties, led a protest march that began last week in the southern city of Karachi and arrived in Islamabad on Thursday, calling for Prime Minister Imran Khan to step down.

Rehman and his right-wing Jamiat Ulema-e-Islam party lead an uneasy alliance of Islamist and mainstream parties, including the Pakistan People’s Party and the Pakistan Muslim League. They all maintain that the elections that brought Khan to power in 2018 were unfair and allege that Khan is propped up by the Pakistani military. But the parties don’t agree on much else. The centrists in particular are uncomfortable with Rehman’s open support for the Taliban and that his Azadi March has banned women from taking part.

It’s the economy. Beyond Rehman’s condemnation of the electoral process, it is his criticisms of Khan’s economic management that resonate with most Pakistanis. After receiving a $6 billion loan from the International Monetary Fund in May, Khan has been forced to make unpopular reforms: cutting subsidies, devaluing the rupee, and raising taxes. But exports have remained sluggish, and growth is projected to slow to less than 3 percent next year. Meanwhile, inflation has soared, consumption has dropped, and large companies have undertaken mass layoffs.

Pakistan’s economic woes are not new. The latest IMF bailout is the 13th such intervention since the late 1980s. As shown below, while Pakistan had a higher GDP per capita than India and Bangladesh in the 1960s, it has now fallen behind. The country once surpassed even China, which has now overtaken all three. 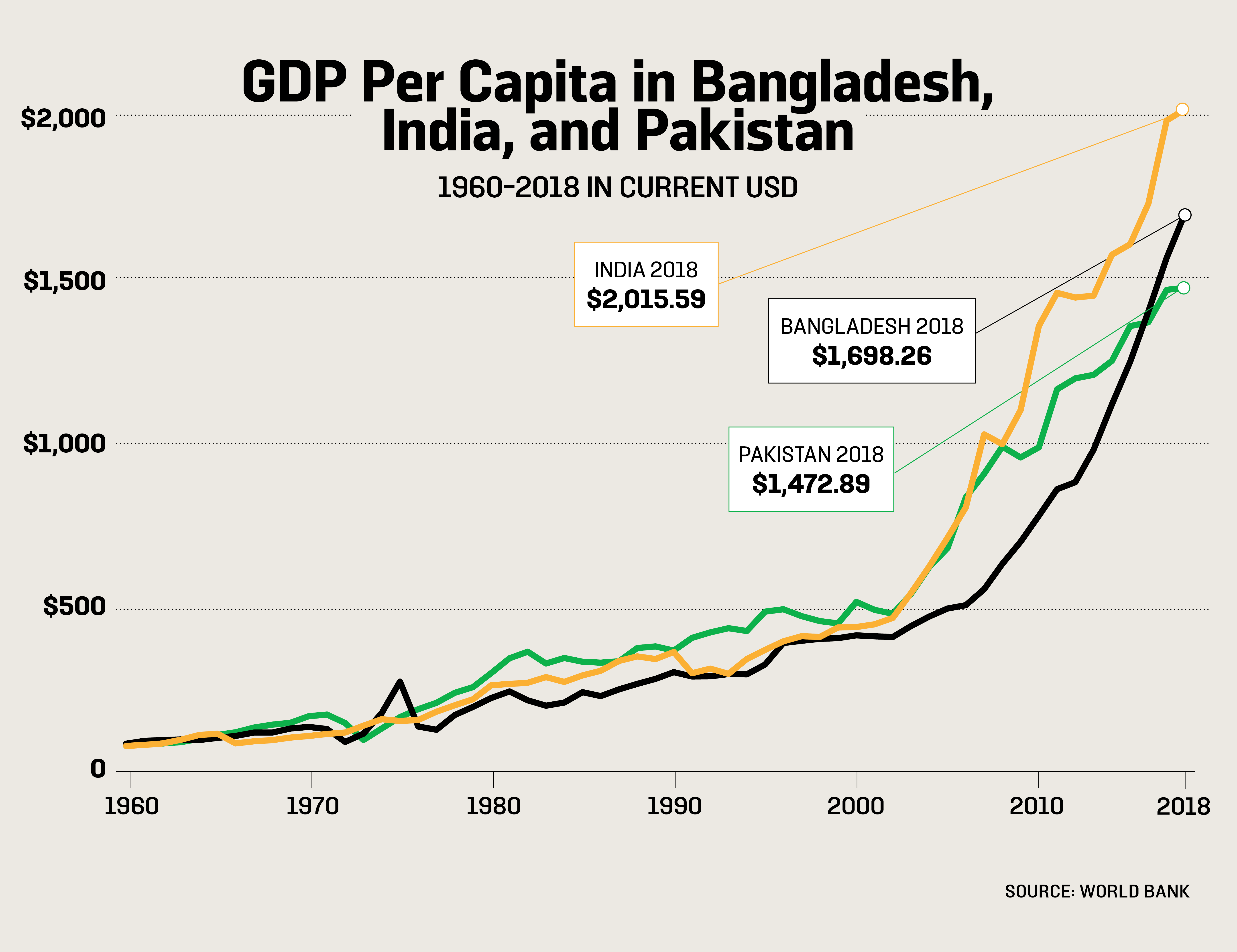 What’s next? Protest marches have become common in Pakistan in recent years. Given the military’s support for the government, it is unlikely Rehman’s movement will topple Khan—at least for now. Ultimately, Pakistan’s real problem may be structural: As the protesters point out, political parties generally need the Army’s backing to win an election. Once they form a government, politicians have little real power but bear the responsibility when things go wrong. The Army—which has all the power but little responsibility—can then throw support behind another political party, eventually leading to fresh elections.

One problem, as the economist Atif Mian points out, is that businesses fear political instability in Pakistan and shy away from long-term investment. That exacerbates the country’s economic troubles, leading to yet more instability and military intervention.

The trade war comes for India. Acting on a complaint from the administration of U.S. President Donald Trump, the World Trade Organization (WTO) ruled last week that India had violated trade rules by handing out around $7 billion in annual export subsidies to Indian companies. The WTO said that New Delhi must cease such payments within six months or face U.S. tariffs. Trump has accused India of protectionism, and the U.S. claim was part of Trump’s trade war on India, as Arvind Panagariya wrote for Foreign Policy in March.

Also complicating India’s trade outlook: Hopes that 16 Asian countries would finalize what could become the world’s largest trade bloc, the Regional Comprehensive Economic Partnership, were dashed over the weekend when India introduced new demands during the negotiations and then backed out. New Delhi has been concerned about a flood of Chinese products overwhelming its homegrown business.

Politics and poverty. The Bangladeshi economist Muhammad Yunus is best known for founding Grameen Bank to help serve his country’s underbanked poor, which won him the Nobel Peace Prize in 2006. But the last few years have not been easy for him. After floating the idea of forming his own political party, he has faced government probes into his bank’s finances, whether he was violating the country’s retirement laws by continuing to lead it, whether it had paid its taxes, and whether he had unfairly fired workers—a charge for which he was granted bail over the weekend.

Nuclear danger. While South Asia observers often worry that tensions between India and Pakistan could escalate into nuclear war, the real nuclear threat may come from cyberterrorism. On Thursday, India announced that the Kudankulam nuclear power plant, one of the country’s newest, had been hacked. The malware used was linked to the Lazarus Group, which is linked to North Korea.

India and Pakistan, South Asia’s two nuclear-armed powers, also have a burgeoning nuclear power sector. Which country gets a greater share of its energy from nuclear reactors?

A) India
B) Pakistan

Growth areas. South Asia could contribute one-third of the world’s economic growth by 2040, according to new IMF research. Part of this projected growth is driven by demographics: The region will see 150 million people enter the labor market by 2030. But the report surprisingly excludes Pakistan and Afghanistan from its definition of South Asia. Including them would likely lower growth projections. 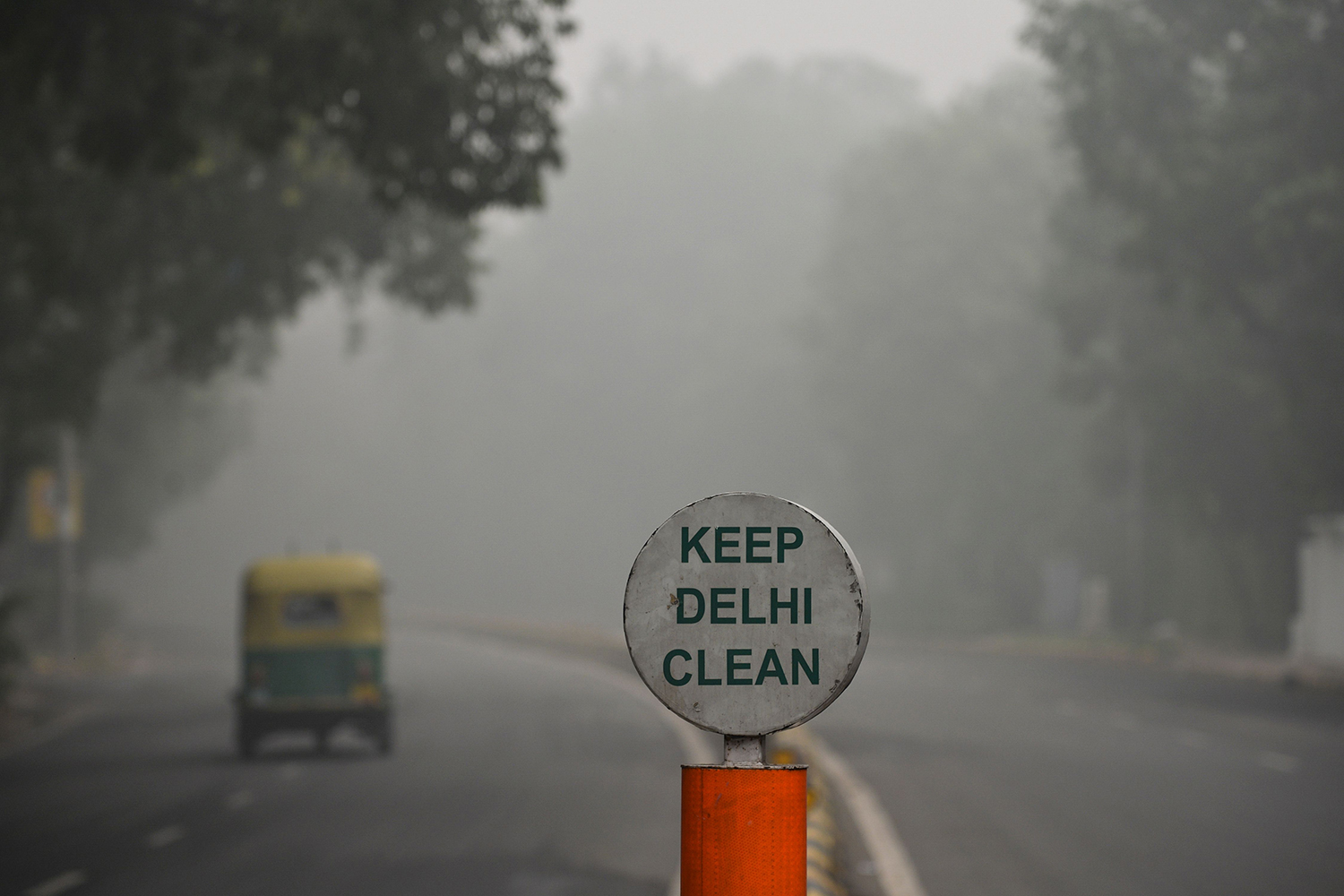 A rickshaw drives along a road under heavy smog conditions in New Delhi on Nov. 3.

A rickshaw drives along a road under heavy smog conditions in New Delhi on Nov. 3.SAJJAD HUSSAIN/AFP via Getty Images

Toxic air in Delhi. As toxic smog blankets New Delhi, poor visibility caused dozens of flights to be diverted from its airport on Sunday. The pervasive air pollution has affected the country’s capital and surrounding areas largely because of farmers burning crop residues, firecrackers during the Hindu festival of Diwali, and colder temperatures.

Clean cars in smog city. It isn’t all bad news for the environment. Quartz reports that India is beating the United States in the race for electric vehicles, which will be priced competitively with gas and diesel vehicles by 2023. Similar progress won’t happen in the United States until at least seven years later.

Lost and found. Nepal’s Saraf Foundation has launched a major effort to return to Nepal drawings and artifacts made by European artists, architects, and anthropologists who worked in the country in the mid-20th century. The archives, including maps, elevations, sketches, and photographs, are now on display in Nepal’s Taragaon Museum.

NEW FOR SUBSCRIBERS: Want to read more on this topic or region? Click + to receive email alerts when new stories are published on Human Rights, South Asia

Three recent books tackle how threats to democracy have shifted in the 21st century.