What Is Beijing Planning for Hong Kong?

After another weekend of violence, China’s proposal for new national security measures in the city could backfire.

Can Beijing Tighten Its Grip on Hong Kong Again?

Can Beijing Tighten Its Grip on Hong Kong Again?

On Wednesday, Chinese Vice Premier Han Zheng, the official responsible for mainland policy toward Hong Kong, pushed the territory’s Chief Executive Carrie Lam to support Beijing’s plan to impose national security laws in Hong Kong after months of anti-government protests. “This extreme violence and destruction would not be tolerated or accepted by any nation in the world,” Han said.

Lam and Han’s meeting followed a very public appearance with Chinese President Xi Jinping on Monday, signaling that she is likely to remain in place for now. It’s unclear what the new national security laws would look like, but possibilities include limited online censorship, the further militarization of the police, and the targeting of businesses that support protesters. Any of those measures seems likely to trigger more protests.

Increasing political violence. Violence certainly intensified in Hong Kong over the weekend, after last week’s announcement that Beijing intended to further tighten its grip on the city—particularly over how the chief executive is chosen. Protesters targeted and vandalized pro-Beijing businesses, prompting aggressive police response. The pro-democracy lawmaker Andrew Chiu was attacked by a man wielding a knife, an incident that left two others in critical condition.

For the first time, a pro-Beijing lawmaker was also the target of violence on Wednesday. Junius Ho, who has been accused of supporting mob attacks against protesters, was stabbed while campaigning—though not seriously injured. The incident was quick and clearly captured on video, leading some activists to allege it was staged.

A potential catalyst? Over the weekend, a 22-year-old student, Chow Tsz-lok, suffered a severe brain injury after falling from a parking garage—allegedly attempting to escape tear gas fired by police. If Chow dies, there could be another wave of rage. Hong Kong’s protests have become smaller gatherings since the summer, as shown below. Police violence and metro shutdowns have diminished the crowds, but giant events are certainly possible in the future. 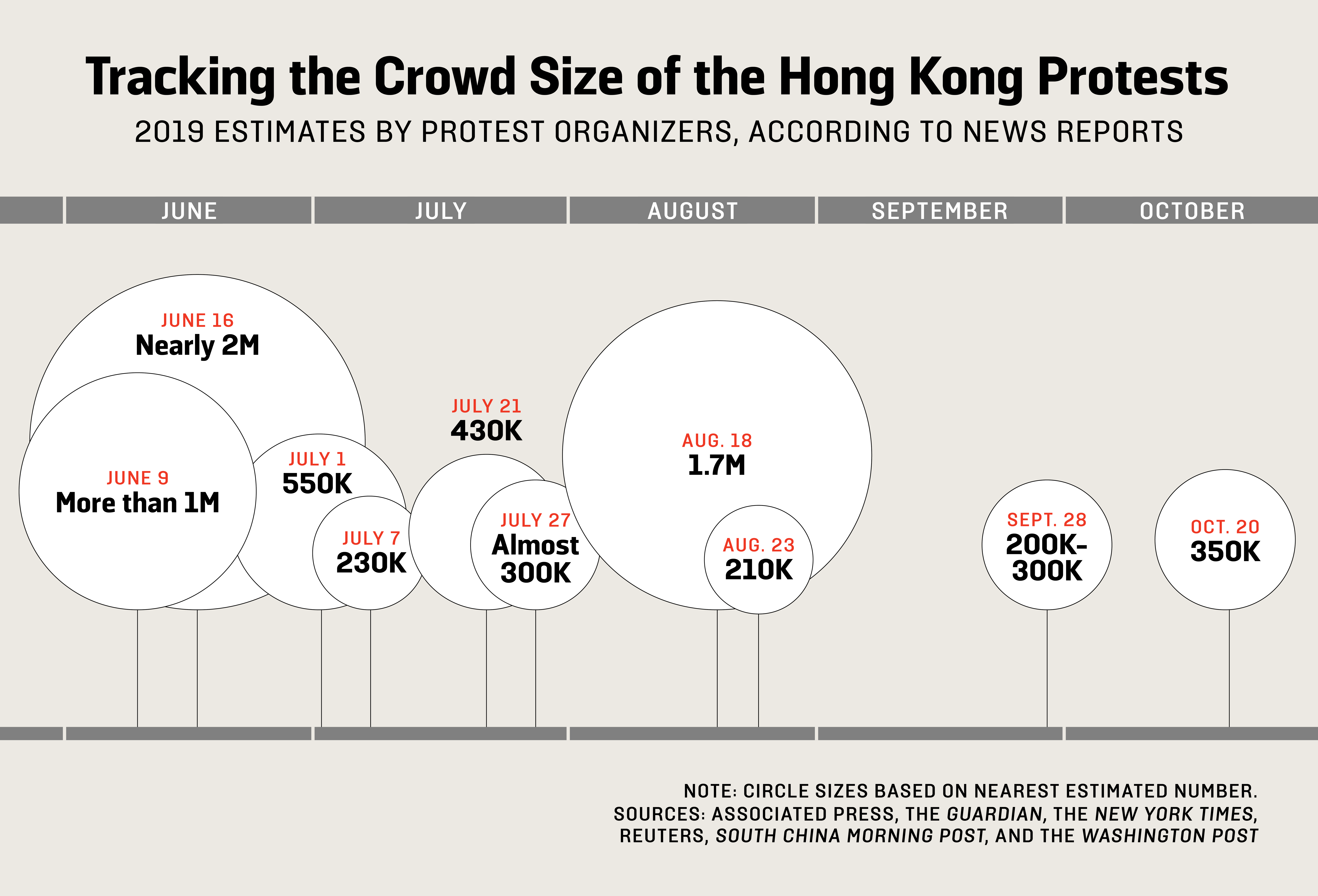 Are monitors abusing women in Xinjiang? A report that male Han Chinese “guests” who have been assigned to monitor Uighur Muslim families are sleeping in women’s beds has caused fury among the Uighur community. While same-sex co-sleeping is common in Uighur households in the colder months, men sleeping in women’s beds would be a clear violation. This sort of abuse would not be surprising, though. Uighur women have been sexualized in Han Chinese discourse, and Han “big brothers and sisters” have the power to report their Uighur host families to the authorities—and potentially send them to so-called reeducation camps.

Death by politics. Ren Xuefeng, a deputy Chinese Communist Party secretary in Chongqing, died last week under unclear circumstances. It appears likely that he died by suicide, and Ren is rumored to have been a victim of a political purge at the party’s Fourth Plenum last week. Chongqing, a city of 30 million people, is particularly risky for officials due to its size and strength, its links to the fallen politician Bo Xilai, and its distance from party intrigue in Beijing.

Iconic bookstore closes. The Beijing Bookworm, a popular cafe and library that hosted China’s international literary festival, is closing amid a long-running crackdown on “illegal structures” in Beijing. The independent bookstore may be a victim of demolition policies as the capital is reshaped—but it may also have been a target as a rare space where Chinese and foreigners openly discussed politics and history. The literary festival, which once drew a wide range of superstar authors, had shrunk considerably in recent years due to political difficulties.

A mistress buyout. The Macau tycoon Alvin Chau is reportedly paying his former mistress $38 million after she ended the relationship. While polygamy is prohibited in mainland China and Hong Kong, many of China’s ultra-rich behave as if it never went away. Chau’s wealth, meanwhile, has dubious roots: He was forced to apologize to the Communist Party over his company’s ties to a gambling scheme, and he is banned from Australia due to criminal links.

Relief for bitcoin miners. Following an unexpected endorsement of blockchain from Xi, Chinese officials have quietly removed cryptocurrency mining from a list of prohibited industries. (The practice was only added to the list in April.) A wave of scams could still follow Xi’s pro-blockchain language, but it appears that Xi and other officials may have shifted the way they regard digital currencies.

Casualties of the trade war. The latest trade figures show big losses for both the United States and China—larger for the Chinese in raw numbers and for the Americans in percentage terms. It seems very unlikely that a meaningful deal will be signed this year. Instead, something could happen next summer or fall as China tries to maximize U.S. President Donald Trump’s desire for an economic boost ahead of the 2020 U.S. elections.

Bedtime for gamers. China is the world’s biggest gaming market, but the government has always been unhappy with the industry—and especially with teenagers’ love of video games. Now, China has imposed new curfews on video game play time for minors, enforceable because of the recent dominance of real-name registration on the Chinese internet. 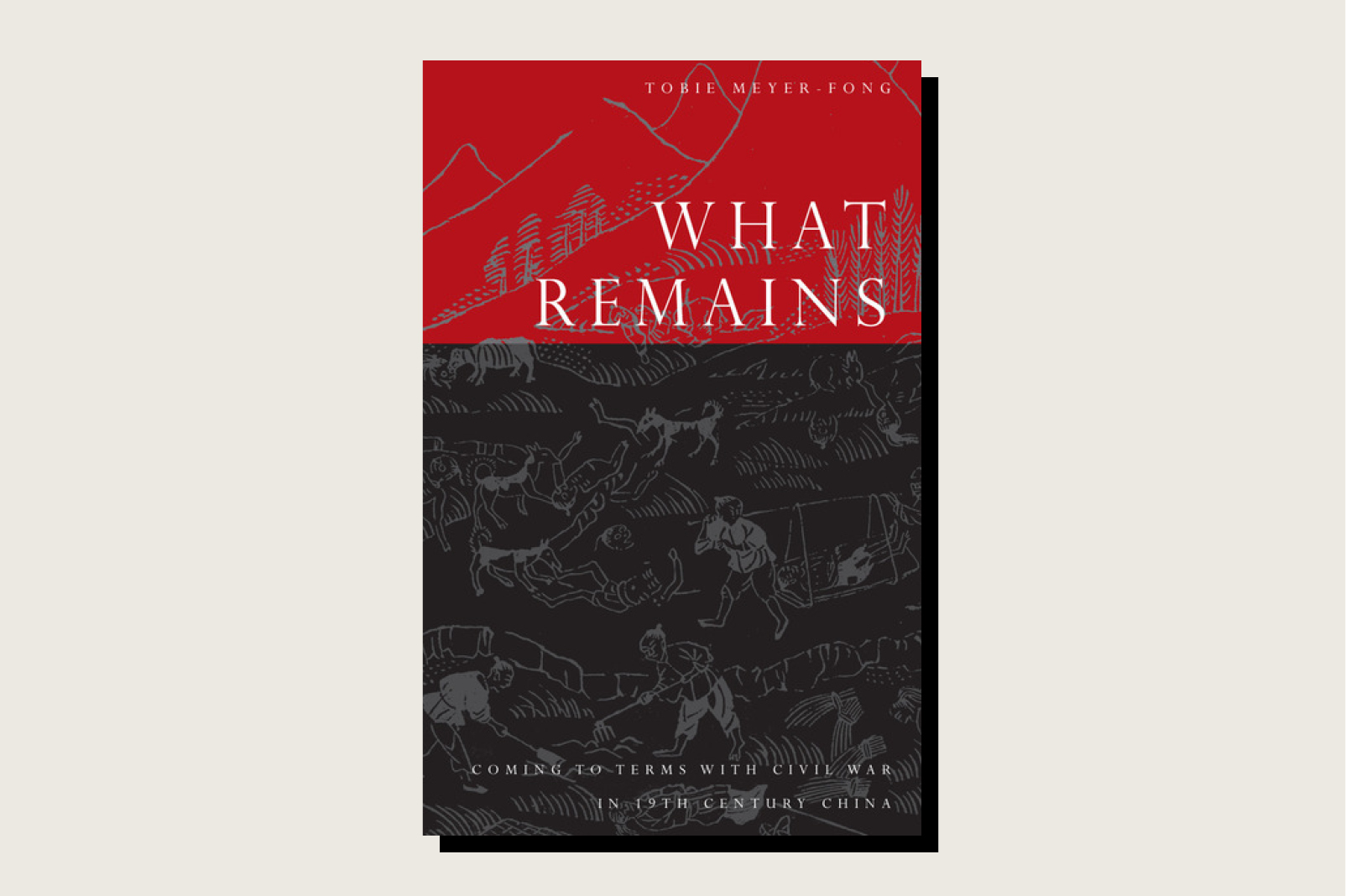 What Remains: Coming to Terms With Civil War in 19th Century China, by Tobie Meyer-Fong

The Taiping Rebellion, one of the most crucial events of the 19th century, is well covered in Western literature—by the standards of Chinese history, at least. This deeply sourced and sensitive book explores the civil war’s aftermath: the attempts to recreate a sense of nationalism after tens of millions of deaths and the struggle to build new Chinese identities. It’s a book with a lot of resonance for the 20th century—and probably also the 21st.

Can America Do Anything at All to Encourage Democracy?