In the Line of Fire Along Kashmir’s Line of Control

Since India revoked Kashmiri autonomy in August, local villagers have been living in fear amid cross-border gunfire and unexploded shells.

CHAKRA, Indian-administered Kashmir—On Aug. 5, New Delhi’s move to abrogate the semi-autonomous status of Kashmir pushed India and Pakistan to the brink of war. Since then, the de facto border that divides the disputed region between the two archrivals—also known as the Line of Control—is at a boiling point.

The two countries each control part of Kashmir but claim the territory in full. Their armies have increased the shelling along the Line of Control on both sides, forcing the terrified local population to abandon their homes. We visited several villages in the area between Oct. 30 and Nov. 1.

Chakra, one of the villages on the Line of Control, 80 miles west of Srinagar, the capital city of Indian-administered Kashmir, has borne the brunt of the escalating tensions.  “The first shell hit our village on the evening of Sept. 4,” said Muhammad Naseer Sheikh, a resident of this mountainous village, “We ran for our lives and left behind everything.”

Comprising 55 households, the hamlet of Chakra lies nestled next to a mountain. A rough track, about 1.5 miles from the main road, connects the village surrounded by maize fields and walnut farms—the main source of livelihood for the people.

Chakra is separated from Dulanja, another village on Indian-administered side of Kashmir, by a deep gorge. A shallow stream runs through it. In 1947, part of Dulanja fell under the control of Pakistan, according to local villagers. They named it Revan. The Indian Army’s last outpost stands on a cliff in Dulanja.

Both Chakra and Dulanja are in the line of fire of the Pakistan Army. Their soldiers are visible at a higher elevation on the mountain just across the border. 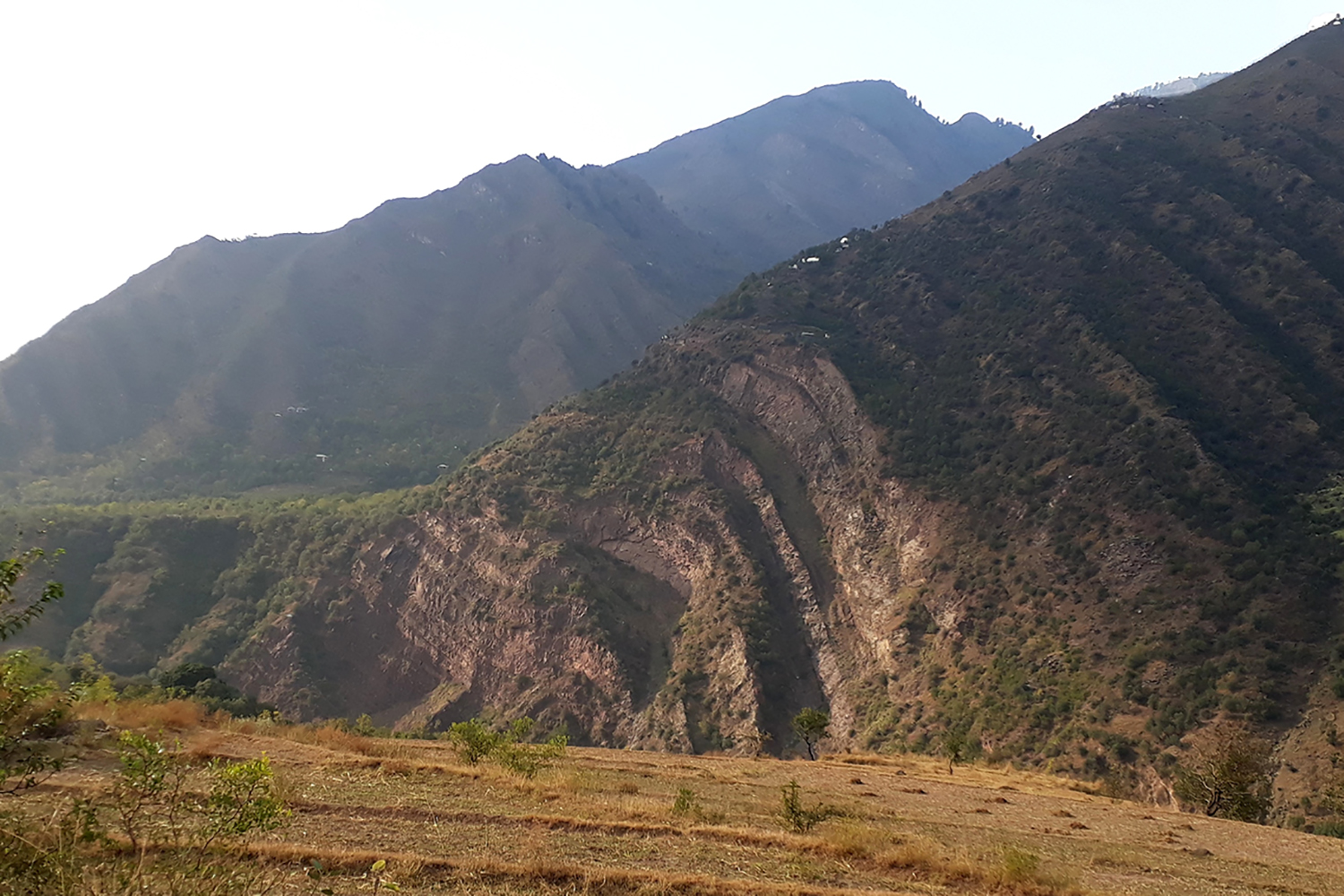 “The shell came from that post,” said Sheikh, pointing toward the Pakistani position from a shattered window of a room on the second floor of his house. “Then the bullets rained through the air. We could see them cutting the air in the darkness.”

Sheikh is the youngest of three brothers. All of them are married, and they live as an extended family of 17 people in the same house.

The worst was yet to come for the family. At around 8:30 p.m. on Sept. 4, according to Sheikh, another shell whizzed past the ravine and hit the rooftop of their residence, a painted concrete structure that stands out in the village of mostly one-story structures.

The family was lucky. Instead of hitting the middle of the roof, the shell tore through one of its edges before landing in the compound of the house. However, the shell did not explode on impact but created a deep hole in the ground. It still lies buried there—unexploded.

Shocked, the family ran outside, crying for help, fearing the shell could explode at any time. Almost two months later, the shell is still live. A group of officials from the local government who came to make an on-the-spot assessment on Sept. 9 declared the house and the area surrounding it a no-go zone. The family has since abandoned the residence. But the brothers make occasional visits to check if their house is intact.

Saleem said they approached the local government and the Indian Army at least four times, requesting that they defuse the shell so that they can return home. “The Army agreed, but they asked us to give in writing that we won’t seek compensation if the shell explodes and causes damage to the house,” Saleem said. “We are a family of laborers. Where will we go if the shell explodes and our house collapses? Why should we bear the cost of hostility between the two countries?”

Riyaz Ahmad Malik, an official in local government, said there were three cases like Sheikh’s in three different villages along the Line of Control. “We can understand the situation the families are going through. But it was important to shift them out of their houses to save their lives first, as the shells in all three cases haven’t exploded so far,” Malik said.

The official said they have now formally written to the Army to send their teams to defuse the shells. “The families will get some relief soon,” he said.

India and Pakistan police the nearly 500-mile Line of Control. Dozens of villages dot the line in the Kashmiri districts of Baramulla and Kupwara, northwest of Srinagar.

“We have never witnessed such intense firing in the past 15 years,” said Farooq Ahmad, a resident of Mothal, another village situated atop a hillock beneath which flows the Jhelum River, which is the main source of irrigation and drinking water for many villages along the Line of Control.

In 2003, India and Pakistan agreed to hold their fire along the line. The cease-fire agreement gave hope to the people living in the border villages that they could restart their lives afresh. But ever since Prime Minister Narendra Modi’s government, led by the Hindu nationalist Bharatiya Janata Party, rose to power in New Delhi in 2014, the cease-fire agreement has been repeatedly violated.

Sitting inside his one-story house, the soft-spoken Ahmad said more than 35 shells have fallen in his village of 60 households since Aug. 5—the day New Delhi unilaterally abrogated Article 370 of the Indian Constitution, which granted limited autonomy to the region, and bifurcated the state of Jammu and Kashmir into two federally run union territories.

Since Prime Minister Narendra Modi’s government, led by the Hindu nationalist Bharatiya Janata Party, rose to power in New Delhi in 2014, the cease-fire agreement has been repeatedly violated.

Pakistan has denounced India’s actions and accused it of violating the United Nations resolutions and its own constitution to unilaterally strip Kashmir of its autonomous status. India, for its part, has framed the Article 370 revocation as an internal issue.

The recent spike in Indian-Pakistani tensions forced the residents of Mothal, like those in many other villages, to flee their homes. The families have since returned, but the temporary migration has come at a cost.

“Many families in Mothal  and adjoining villages sold their cattle and movable household items like television sets at cheaper rates fearing war is imminent,” Ahmad said. “The families wanted to have as much money as possible. Now they regret selling in distress. This is how we live our life on the [Line of Control].”

There have been 2,216 cease-fire violations this year alone in Kashmir, according to official data, including 307 violations in August and 292 in September. An official said seven people, including six civilians and an Indian Army soldier, were killed in firing and shelling in the villages along the Line of Control.

Cut off from the outside world, Kashmiris are digging trenches, starting strikes, and preparing for a long fight ahead.

With the repeal of Article 370, India has opened the way for fierce competition over scarce government jobs.

Though the local government is yet to make a final assessment of damage to residential homes, owing to the tense situation on border, the official said more than three dozen structures are reported to have suffered partial or severe damage. The villagers are aware that the process to get compensation for the damages is often drawn out and sometimes takes more than a year.

“Six houses got damaged in our village in shelling from across the border last year. The affected families are yet to be given compensation by the government,” said Mohammad Shafi Bhat, another resident of Motihal. “The authorities come for assessment, make promises, and then forget to compensate the affected people.”

The families living along the Line of Control have an immediate demand: that the guns on either side should fall silent. “Narendra Modi says that people of the country sleep peacefully because borders are safe. Let him visit our villages and see for himself how we are living,” Bhat said. “We have been craving just one night of peaceful sleep since Aug. 5.”

Every time the guns roar on the Line of Control, Nazim Din of Motihal rushes with his two children, aged 5 and 9, to the only safety bunker still intact in the village.

In 2002, the local government built bunkers in many villages situated within six miles of the line. However, these underground structures got buried in the devastating earthquake of 2005 that shook area villages, causing death and destruction across the dividing line.

“We have just one bunker still intact, and every family wants to get some space inside it when there’s shelling on the border. Then it turns into a race among villagers to reach the bunker,” said Bhat, a 47-year-old farmer. “Those who make it first consider themselves lucky, others have to simply return and pray that the shells somehow don’t hit their houses.”

Since 2015, fearing for their lives, the residents of villages along the Line of Control have been consistently raising the demand for construction of bunkers. The Jammu and Kashmir government has approved a plan for mass construction of these underground, one-room or two-room structures in border districts of Rajouri and Poonch, less than 200 miles southwest of Srinagar. However, families living along the line in Baramulla district say they are getting a “step-motherly treatment.”

“Is our life cheaper? Don’t we belong to this country? Our families are vulnerable to shells from across the border?” Bhat said. “There is not a single village on [the Line of Control] which has not witnessed death in shelling or due to bullets.”

One such village is Churanda, with a population of about 1,375. Full of maize fields, the village lies between two mountains on either side of the line. The outposts of the rival armies, visible from the village, stand atop these mountains. The village headman, Lal Din Khatana, said 17 people have been killed in the village, and 37 others injured in the shelling since 1990 have had to face amputation of their legs or arms.

More than 250 families in the village live beyond the fencing erected by the Indian Army toward the Line of Control, which becomes a “no-go zone” each time the guns start firing. The main gate leading to the village is closed by the Indian Army every time there’s escalation on the border, cutting off the families. In 2013, three people, including an 18-year-old girl, a ninth-grade student, and a father of four children, were killed in cross-border shelling in Churanda.

“We are fed up of living this life,” Khatana said. “Let there be a war once for all. Those who will survive will at least breathe in free air.”

Muddasir Ali is a journalist based in Srinagar. Twitter: @muddasirali27

Majid Maqbool is a Srinagar-based journalist and writer. Twitter: @MaqboolMajid

Cut off from the outside world, Kashmiris are digging trenches, starting strikes, and preparing for a long fight ahead.

With the repeal of Article 370, India has opened the way for fierce competition over scarce government jobs.