Which Democratic Candidates Are National Security Employees Opening Their Wallets for?

Data shows that members of the State Department and the military are investing in candidates who are not currently topping national polls. 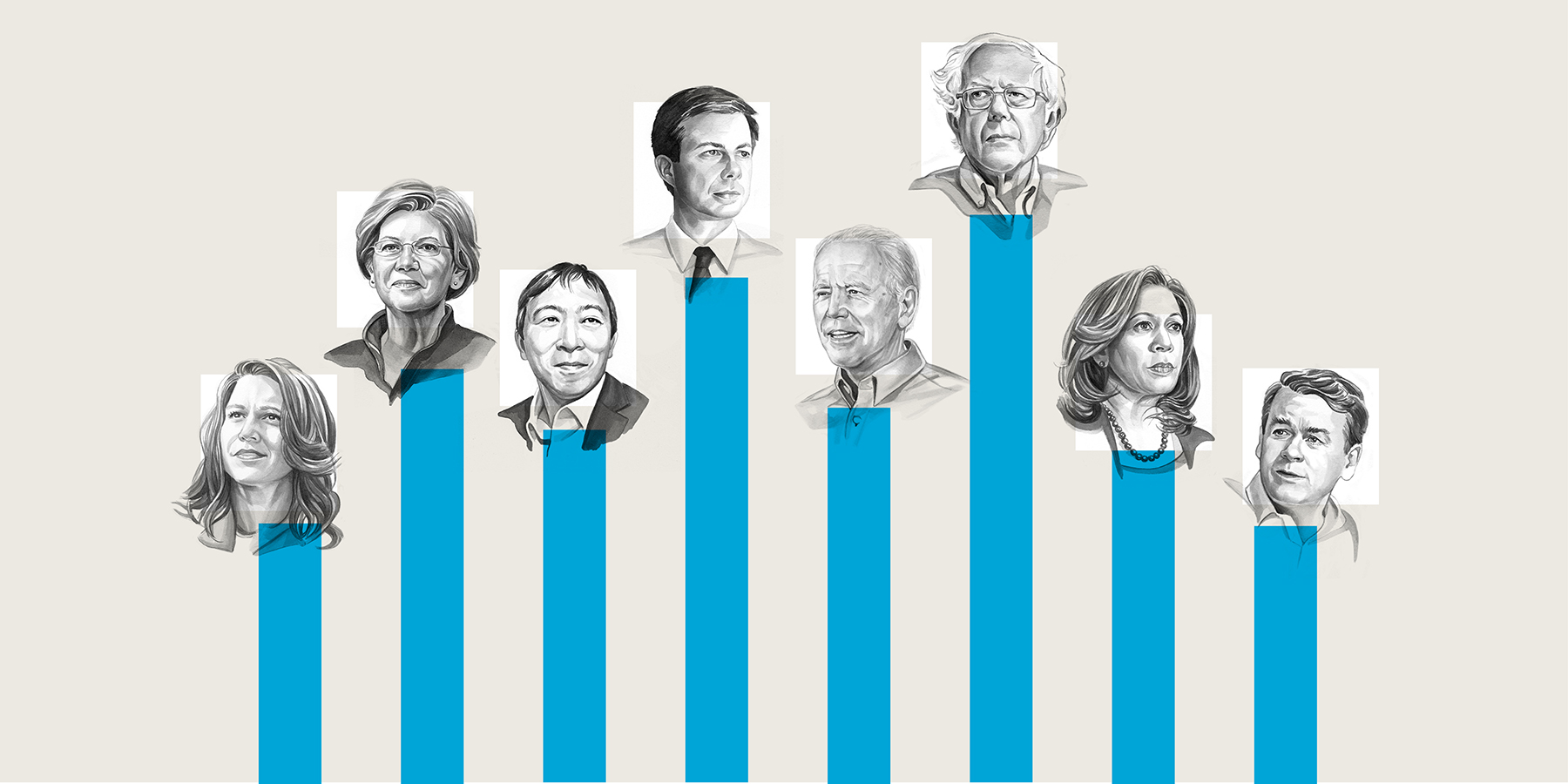 Foreign Policy examined how much money was donated to campaign committees from employees of the State Department, the military, the Department of Homeland Security, and the Justice Department, drawing on data from the Center for Responsive Politics. When combining contribution amounts together, Sanders is the biggest beneficiary of national security support, followed by Buttigieg and Warren. Democratic front-runner Biden and President Donald Trump trail behind those candidates, ranking no higher than third for any one department.

The numbers reflect 2019 contributions received through Sept. 30. Donations from employees include those made by their spouses. Foreign Policy tallied data for candidates who were still running as of Nov. 8. 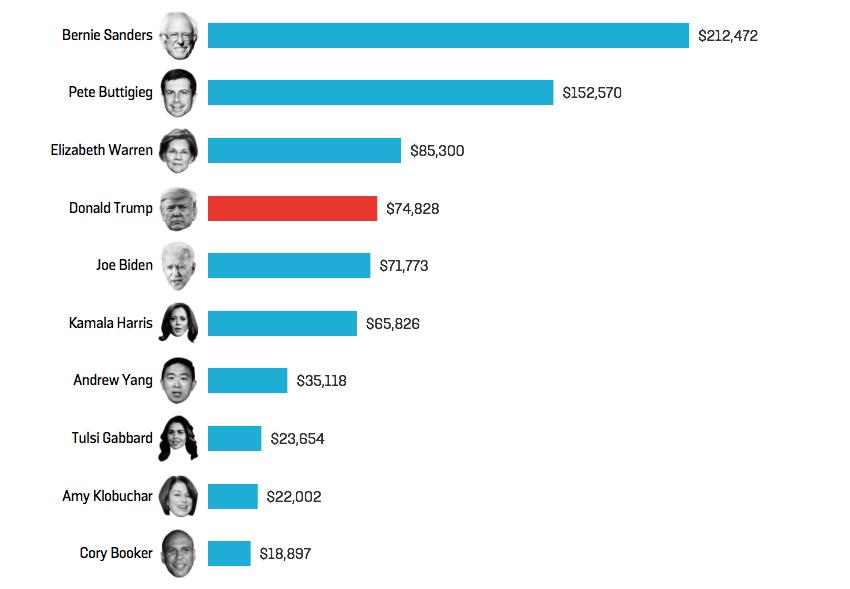 INCLUDES TRUMP AND ALL DEMOCRATIC CANDIDATES WHO RECEIVED CONTRIBUTIONS AND HAVE QUALIFIED FOR THE NOV. 20 DEBATE. SOURCE: THE CENTER FOR RESPONSIVE POLITICS.

The charts below break down how national security contributions are distributed among each of the top 15 candidates.

Buttigieg raised more than twice as much money from diplomats in 2019 as Warren, the next-highest candidate.

“As a veteran, Pete understands the importance of leadership and the need to restore American values and credibility on the world stage,” a top Buttigieg campaign aide said.

Trump, on the other hand, has raised substantially less from the State Department. With $1,886 in contributions, the president received fewer donations than 9 of his Democratic rivals. One of Trump’s primary competitors, former South Carolina Gov. Mark Sanford, received nearly the same amount.

“It shouldn’t surprise anybody that [diplomats] would be reluctant to support an administration that has done so much damage to an American institution,” said Daniel Fried, a former U.S. ambassador to Poland. 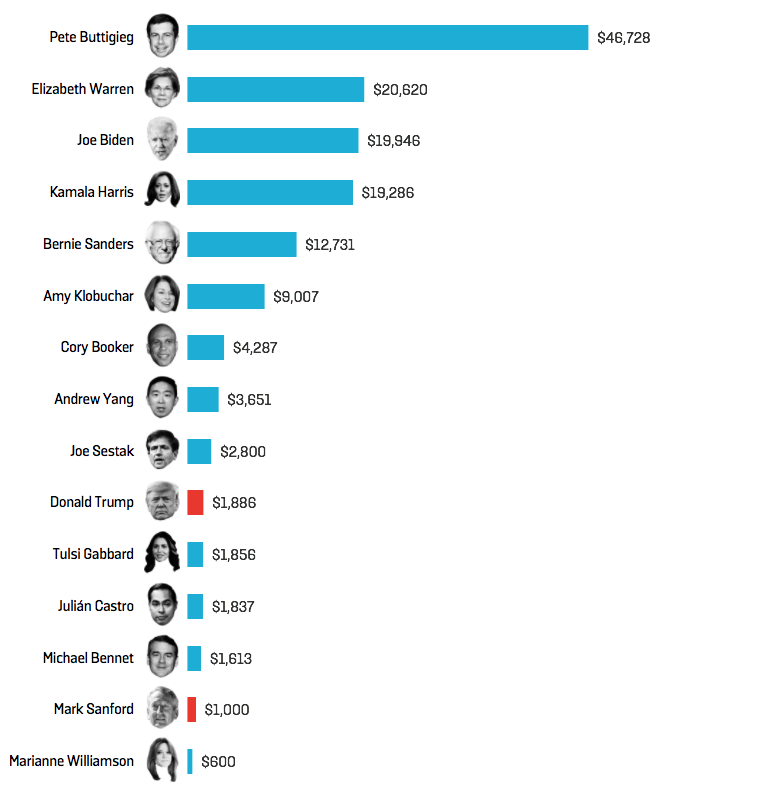 Despite the presence of two veterans and an incumbent president in the race, no candidate has raised as much as Sanders in military contributions.

“I would never have guessed that. [Sanders] would have been way down my list of possible answers if this were a Final Jeopardy question,” Larry Sabato, the director of the University of Virginia Center for Politics, wrote in an email. “He’s mainly about economic equality and Medicare for All.”

A Sanders campaign aide pointed to the senator’s promises to “end the endless wars” and the many years he has spent on the Veterans’ Affairs Committee as reasons for his popularity with military employees. “It shouldn’t be a surprise that these things draw support from so many in the military, but Bernie is extremely proud to have it,” the aide said. 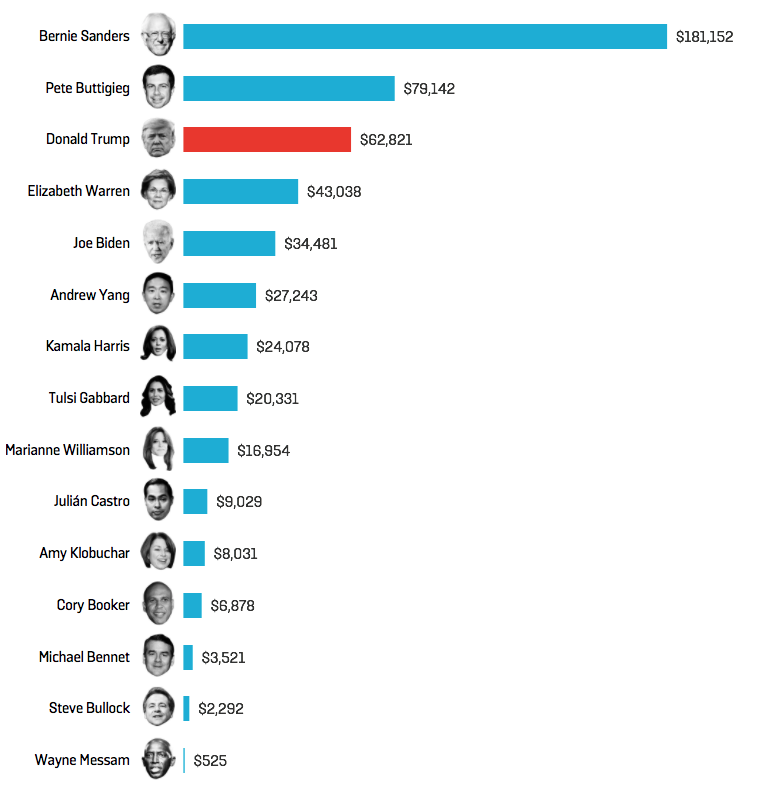 INCLUDES CONTRIBUTIONS FROM INDIVIDUALS IN THE ARMY, NAVY, MARINE CORPS, AND AIR FORCE. THE COAST GUARD IS GROUPED WITH THE DEPARTMENT OF HOMELAND SECURITY. SOURCE: THE CENTER FOR RESPONSIVE POLITICS.

Buttigieg narrowly surpasses Sanders as the top recipient of campaign contributions from the Department of Homeland Security. Buttigieg has taken an unconventional stance on national security, writing in an essay for CNN that “climate change is affecting everyone, everywhere. It is the security challenge of our time, and a wall on our southern border won’t stop it.” He also promises on his website to increase federal resources to counter domestic terrorism and white supremacist violence. 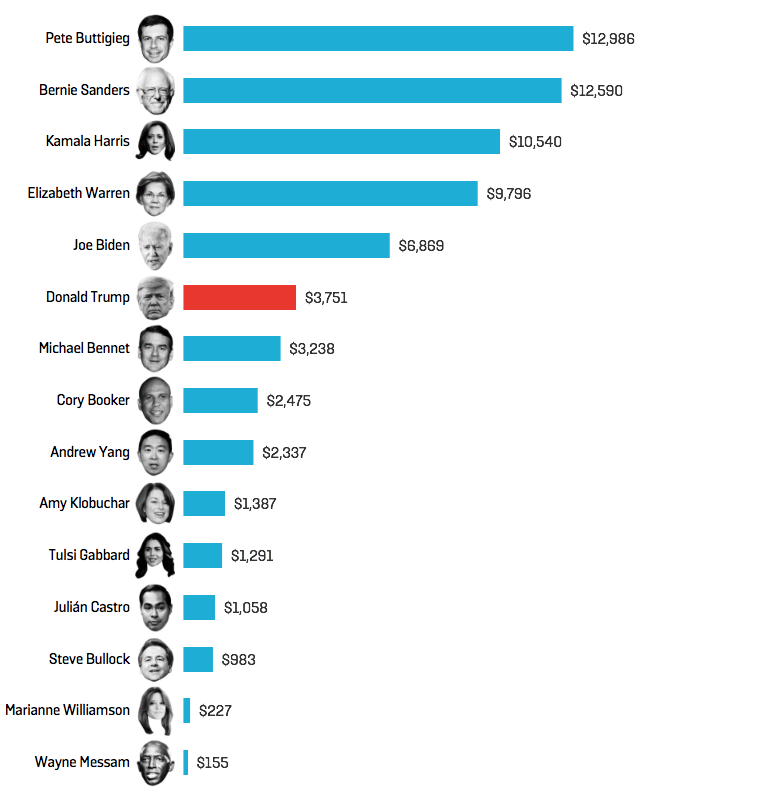 Sen. Kamala Harris is wedged between Buttigieg and Warren as the second-largest recipient of campaign contributions from the Justice Department. Throughout her campaign, Harris has highlighted her service as attorney general of California and district attorney of San Francisco. Despite support from these contributors, Harris has slid down to fifth place in the race. 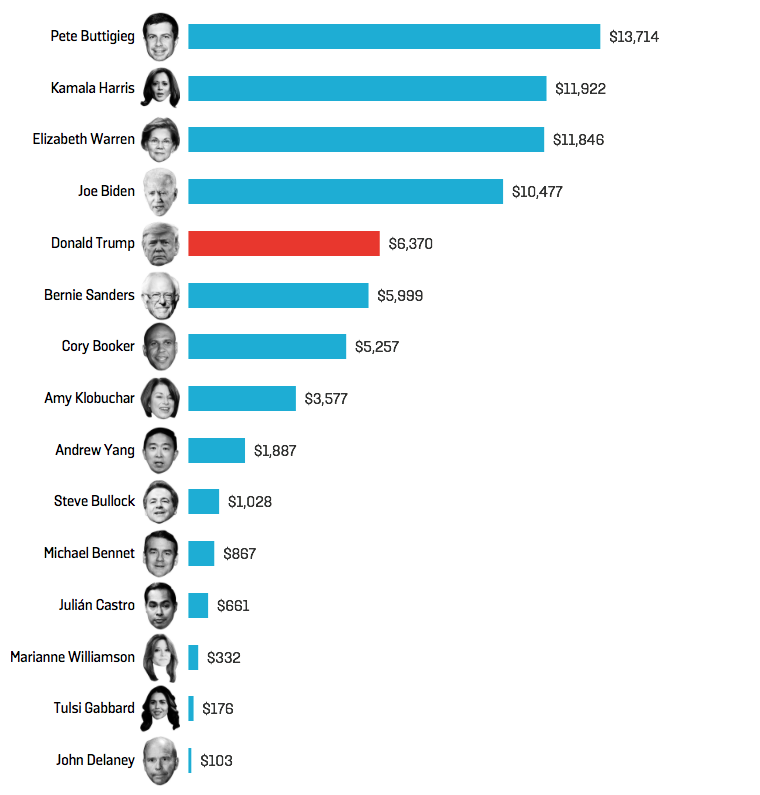 Put together, donations from national security employees comprise only a small portion of general fundraising, however. And when accounting for both committee money and outside money—leadership PACs, super PACs, and 501(c)(4) dark money outlets, for example—no Democrat matches even a third of the funds raised by the Trump campaign this year.

Candidate Committee and Outside Money 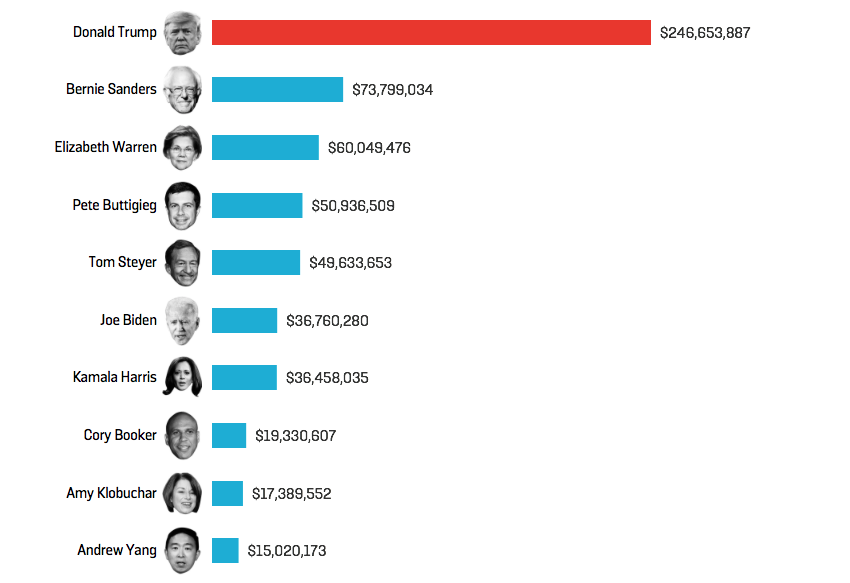